That wasn't Radebaugh's only big splash right after the War, either. He continued experimentation with fluorescent paints and produced drawings for billboards in and around Detroit. He also began attracting notice for his avant garde black light work. And he first dipped his toe into syndication waters with a black-and-white illustrated panel syndicated through General Features, "Can You Imagine?", which ran for about four years and was dedicated to views of the future. Among the topics it covered were war machines like armored helicopters that shells could not penetrate or monsters from Planet X that could "make our wars seem like kissing games."

In January 1947, his work was featured in a national exhibit of automotive art held at the Detroit Institute of Arts. By 1948, he was gaining notoriety in the Detroit area and was featured in several Detroit Free Press articles. And by 1949, he, along with what seemed like half of America, had moved to the suburbs — in his case, Beverly Hills, outside of Detroit. He continued his newspaper work and his magazine ads, adding Coca-Cola to his client list.

During the early fifties he was doing ad work for Nash and Chrysler (designing the Chrysler Imperial brochure). The Nash Airflyte ad depicted two cars — golden and blue — in rugged mountain country mounting a steep hill with a sharp drop off. The message was that the Nash could mount any terrain, face any danger, and still be a joy to drive. 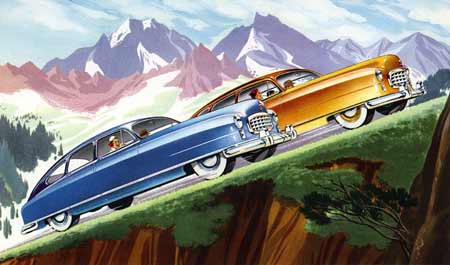 The Chrysler illustrations must have taken a great deal of time to produce because they are scene sketches rather than simple car ads. The Chrysler Six-Passenger Sedan sketch features a dark blue sedan with white highlights parked on a brick-colored, curving driveway edged by a low brick wall. In the background is an architectural wonder — a modernistic house with pergola, an anchor on the eaves, port-hole windows, an oval platform with skylights at the level of the second story, a patio with sunbrella, and an open roof framework. Set against a golden sky and accented with stylized trees, the elongated red sedan at its front door seems to be another part of the landscape. A wooden railing and the overhang of open wooden rafters in the foreground set off the entire scene. The Chrysler Eight-passenger Imperial is clearly a companion piece and features a black car on tan roadway parked at rounded stairs leading to a multi-colored stone patio. There is a low, open, balustrade cement wall, a gazebo on the manicured mid-ground, and a classically-inspired, columned building in the background. 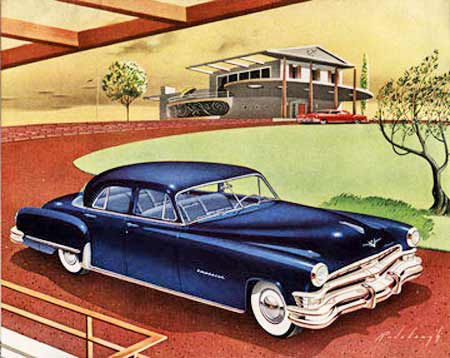 About this time Radebaugh also added National Motor Bearing Co. to his client list. An extensive series of black-and-white ads touted the importance of oil seals and bearings to future modes of transportation. Atomic cars and robotic vehicles zoomed through the aerial roadways of the future. One ad showed a finned road ship (car) speeding along multi-layered aerial roadways around and through skyscrapers with this caption: "When the legal speed limit is 200 m. p. h.. . . National Oil seals will protect the bearings." 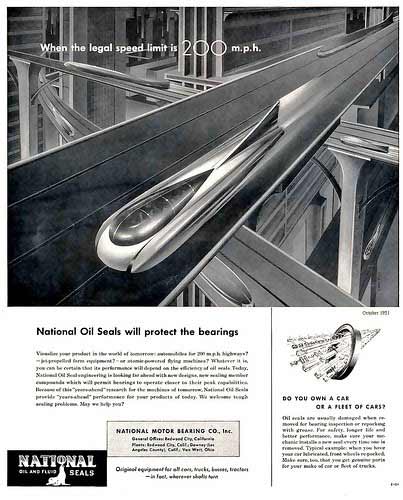 In the mid-fifties, Radebaugh did significant design work for successive years of the Detroit Free Press Auto show. By the late fifties, he had taken to the road — literally — in a 1959 British Ford Thames van converted to mobile art studio. McElroy's Garage & Collision in Berkley, Michigan did the lavish conversion. And he got into syndication once again with a futuristic comic strip, whose name graced the van.

See 'Ya in the Funny Papers

Radebaugh's Sunday comic strip — "Closer Than We Think" — was syndicated in the United States and Canada and ran for five years, 1958-1963, reaching nearly nineteen million viewers at its peak. There was only a single panel accompanied by explanatory text and, at times, arrows pointing to areas of special interest. Comic strips, however, rely on clear line work rather than airbrush technique, so Radebaugh used shading and stippling — but the comic panels lacked the depth and intensity of his signature airbrushing. And rather than simplify an idea, he continued to add detail after detail to his drawings, leading to muddled drawings rather than the clarity we appreciate in comics.

Among the vehicle-related strips, however, were some of these sure-to-happen ideas: 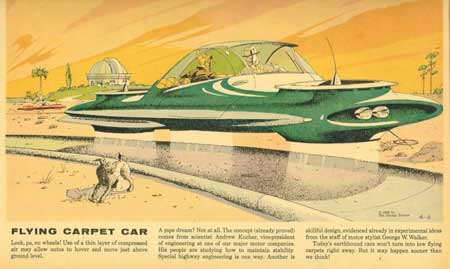 Flying Carpet Car. Your car floats just above the ground on a layer of compressed air. (April 6, 1958) 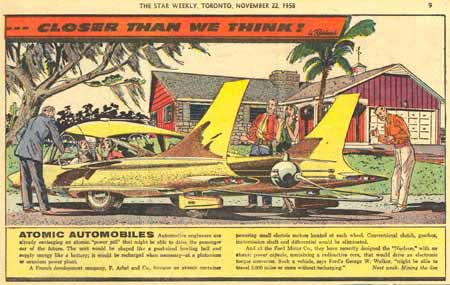