Lately, the topic of working women has been making headlines. People on both sides of the political spectrum are debating whether women who have a job out of the home work harder than stay at home mothers. We don't know the answer to that question, but we know that women have worked very hard in the auto repair industry since the earliest days of motoring.

Many women in the car service industry are hugely successful, too. Andra Fordin is the owner of a Great Bear Auto Body Center in Flushing, Queens. Audra runs a class called "Women Auto Know" to teach other women about auto mechanics. The class covers the basics like how to start a car with battery cables, how to check the oil level and how to change a flat tire.

In the interview, Fordin said she feels like "A woman in a man's world," but the truth is that women auto mechanics are really not a rarity and their ranks have actually been increasing. According to the U.S. Department of Labor, there were 880,000 automobile service and repair technicians in 1989 and 6,000 of them were women. By 1999, the total number of mechanics had shrunk to 837,000, but the number of women mechanics was up to 12,000.

While the growth in female mechanics may be a recent trend, ladies have been turning wrenches since the dawn of automotive history. During World War I, women — including Gertrude Stein — drove ambulances and other vehicles for the Red Cross in Europe. They had to furnish their own cars and were also expected to maintain them. The maintenance included making minor repairs. See Rolling to Victory: U.S. Enlists Automakers in WWI.

We don't know if Mary Anderson ever turned a wrench, but in 1902, she invented the first windshield wiper, adopting the idea from a device used on New York City street cars. And there's little doubt that Alice H. Ramsey — first woman to drive coast to coast — had tools in her Maxwell as she went across the country

By 1910, five percent of licensed drivers were woman and this number took a big jump after Charles Kettering invented the electric starter two years later. Silent film star Florence Lawrence was another inventor. She came up with the idea of a first turn signal — called an "auto signaling arm" — that attached to a car's rear fender. Florence encouraged women to start driving. In 1916, Alice Burke and Nell Richardson traveled for seven months and 10,700 miles to help win voting rights for women. 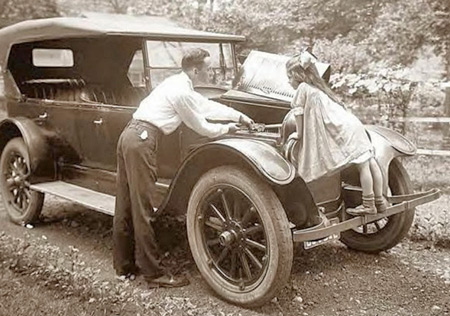 A man points out something below the hood of a car to a young girl who seems pretty interested in learning how to service a car.

According to research done by the AACA Museum in Hershey, Pa., in 1915 Wilma Russey became the first woman to work as a taxi driver in New York. Russey was also known as an expert garage mechanic. In 1916, The Girl Scouts of America initiated an "Automobling Badge." To earn it, girls had to demonstrate driving skills, auto mechanics talent and first aid skills.

Mechanic Helen J. Owens knew how to put a sturdy front bumper to good use as a mechanic's stool. The car wears 1918 New York license plates. 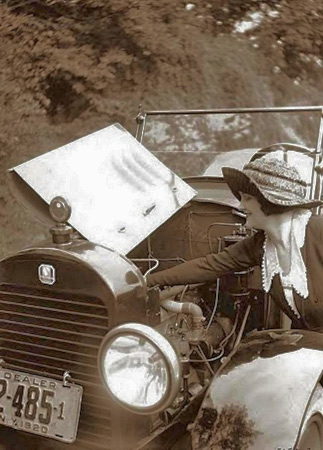 A well-dressed woman tinkers under the hood of a car with 1920 New York dealer plates. Dealers today say they'd like to hire more woman service technicians, but can't find enough of them.

In 1922 Henry Ford opened his Phoenix Factory employing women to do assembly and welding work. The workers at the plant were all single or widowed, since Ford's wife did not approve of married women working outside the home. Henry himself said, "I consider women only a temporary factor in the industry." Old Henry was way wrong on that count.

Grace Hurd, Evelyn Harrison and Corinna DiJuliano work on a car engine at Central High school in Washington, D.C., in 1927. Helping them under the car is a lady named Grace Wagner.

Grace Wagner works on an engine during an auto mechanics class at Central High School, in Washington, DC, in 1927.

America's massive mobilization for World War II proved Henry Ford's view to be short sighted. To build the machines and weapons needed to conduct the war, domestic automakers halted the building of cars completely. Factories were converted over to the full-time production of war goods and many assembly lines were crewed by women building everything from torpedoes to airplane engines. 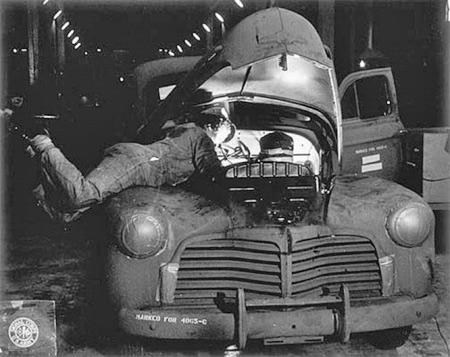 Women also worked as mechanics for the Armed Forces, thanks to American Congresswoman Edith Nourse Rogers, who introduced a bill to establish the Women's Army Auxiliary Corps (WAC). The work uniform for enlisted women assigned as mechanics, chauffeurs, bus, or truck drivers was a one-piece coverall made of khaki green cotton jean cloth similar to those worn by male mechanics. Army Director Oveta Culp Hobby insisted that WAC uniforms be of the same materials and colors as the men's to keep uniform costs low and help women blend in at Army posts and camps throughout the United States and overseas (Plate 12).. Early in 1943, dark herringbone twill trousers and shirt for year-round wear replaced the original "Army Green" coverall. 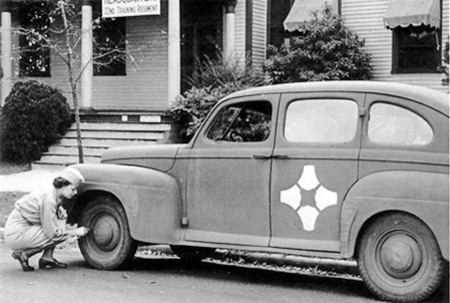 A WAC driver checks the air pressure on the front left tire of a Ford U.S. Army staff car. Today, 25 percent of women responsible for maintaining their vehicles tackle light jobs like this one.

A woman was allowed to fill any authorized military position she was physically fit to perform. Wartime manpower shortages encouraged them to do more than serve as only typists, clerks and photographers. Some WACs put their civilian-acquired skills to work for the Army. Others moved into new occupations and some became mechanics, drivers and heavy equipment operators.

On the domestic home front, women were enlisted into various roles from playing baseball to repairing the older cars used to get essential workers to their jobs. A slogan heard frequently was "Do the job he left behind."

University of Minnesota historian Elaine Tyler May has written about women and work in the postwar era. She says WWII opened up tremendous opportunities for women because so many men joined the armed services and went abroad, leaving open many jobs that had been previously closed to women. According to May, it had been long assumed women couldn't do those jobs.

Women entered these jobs and excelled and enjoyed them for the most part. Women made airplanes and warships, munitions and tanks. They enjoyed the work, good pay, opportunities for advancement and the excitement of working with other people on important jobs that needed to be done for the war.

May says women wanted to keep working after the war, but the millions of men returning from military service created fears of another Great Depression once the wartime economy shut down. Many women were asked to "do their part" by leaving the job market. Some were even fired so vets could get work.

Historian Joanne Meyerowitz has researched postwar women who successfully combined motherhood and a career. She discovered that Ebony magazine sometimes featured articles on this topic, such as the story of Louise Williams, a mother of two who was once the only black mechanic at American Airlines. "She is a good cook, but an even better mechanic," the magazine discovered. "Williams was also an inventor and an active member of her union. Ebony wrote of Williams, she was "never a lazy housewife."

In 1995, Women in Technology published an article by Pat Crocker about Betsy Hoffman, the Chairperson of the Automotive Technology Department at Vermont Technical College. Hoffman was the first woman in the U.S. to hold Automotive Service Excellence L1 Advanced Engine Performance Certification. Hoffman told Crocker that she envisioned, "Enormous opportunities for women in the automotive field and fewer and fewer obstacles to their success in it.

Hoffman felt that all modern mechanics had to contend with high-tech computer-controlled engines that were more mentally that physically challenging. "Parts often weigh less than a pound," she said. "And when they don't, even male mechanics rely on lifts, levers and teamwork to manipulate them."

Hoffman's got into auto mechanics because her car kept breaking down and she never had enough money to fix it because she didn't have a moneymaking skill. So, she didn't know a thing about cars when she started, but within two years, she had a skill that turned out to open new career paths for her.

Today, less than one percent of all National Institute for Automotive Service Excellence certified technicians are women. According to AZ.Central.com, Sarah Lateiner is one of them. An idealist who sailed through college and studied law, Lateiner preferred working on cars more than cases.

In 2001, "Bogi" Lateiner graduated from Universal Technical Institute in Phoenix with an associates degree. She was then accepted into BMW's elite mechanics program and got a job at a BMW dealership in New York. She was well aware that there were few women in the auto-repair fraternity. "Porsche turned me down," she said. "They've never had a woman in their program."

When she's not changing oil or fixing transmissions at her 180 Degrees Automotive repair shop in Phoenix, Lateiner mentors women who want to fix cars. "It's definitely a boys' club," she said. "I felt I had to be tough." So, she hosts a monthly class for women who want to know more about car repair.

Though hardworking female technicians like Sarah still struggle with industry acceptance, a 2001 study by the Automotive Aftermarket Association revealed there was no reason for women techs to be considered less skilled then men in the repair industry. In fact, Steve Steffens, vice-president of marketing for Merchant's Tire & Auto, told the association that women techs are very good. "They are detail-oriented and very customer-focused, which is hard to find in a technician," Steffens said. Female mechanics also make a lot of sense.

According to a 1999 study by the Automotive Service Councils of California, 74 percent of women make the maintenance decisions concerning their vehicles. Eighteen percent of women said their decisions were shared with men and only eight percent said they were not responsible for car repair choices.

For women considering a car repair career, the most important thing to think about may be the evolution of the automotive service technician's salary! According to a recent report by the U.S. Department of Labor, the median pay for automotive service technicians is approximately $30,000 to $34,000 a year, and master technicians can earn as much as $70,000 to $100,000 a year. These figures come from a study made by the National Automobile Dealers Association.