Some Classic Car Gas Tank Repairs are "Split or Miss"

There are a number of approaches to take when restoring the gas tank on a collector car. The easiest is to get by with the old tank, hoping it won't leak and that the rust accumulation inside will be cleaned up once you start running gas through it. Sometimes this works, but as they say, "Good luck with that."

If the problems with the tank amount to little more than minor cosmetics — such as a few shallow dents — a professional shop may be able to (carefully) weld or glue "pull rods" to it and pull out the dents. These shops usually work on both gas tank and radiator repairs and will be listed in the local telephone book.

If the gas tank is very rusty inside, there are acid solutions that can be poured into it, sloshed around and poured out again. The tank can then be rinsed and if still rusty, it can be treated the same way over and over again until clean.

Another option is finding a good used tank on a parts car or a salvage yard car. Of course, this is not nearly as easy in 2015 as it was years ago. The increasing prices that salvage yard owners can get for steel have reduced their desire to hold onto to older cars. Also, most tanks in salvage yards are rusty.

A fourth possibility exists if you have a cult car — such as a Corvette, Camaro, Mustang, Nova, Tri-Five Chevy, etc. Then, you can order a reproduction gas tank from a mail order catalog. The number of reproductions available seems to be growing each year. And if total originality isn't a big concern, there are numerous suppliers of high-quality tanks that can be adapted to almost any car.

None of these approaches applied to an early postwar Mopar we were working on. The car was a rare body style. We believe that only 76 like it were built between 1946 and 1948. It had a straight eight engine and a gas tank with a large dent in it. Reproduction gas tanks were available for the six-cylinder edition of this car, but the larger gas tank for eight-cylinder models was not available. While the reproduction tank for the six-cylinder model would probably work fine, the owner wanted the car to be totally original with the larger eight-cylinder tank.

The top side of the original 1948 Mopar gas tank doesn't look bad at all. 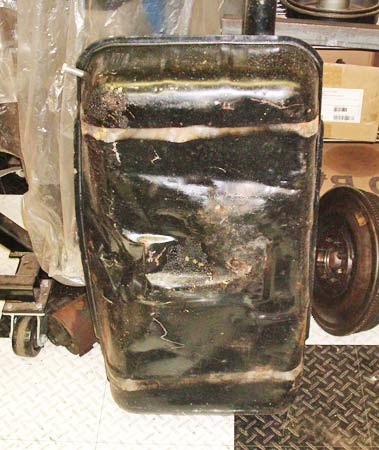 It was the bottom of the tank that took a real beating over the years. The metal is fairly heavy sheet and the dents could not be removed by using wooden rods through the inlet or welding on dent pull-out sticks. 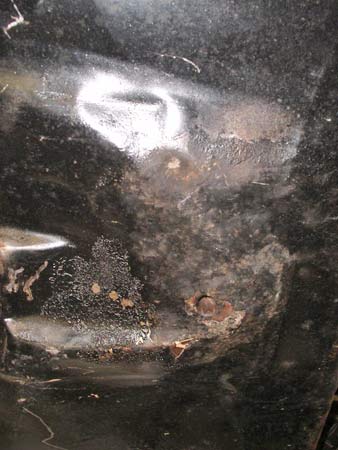 Here is a close up of the damage on the underside of the gas tank.

We first took the tank to a professional shop that worked on radiators and fuel tanks. The technicians there carefully evacuated all gasoline fumes from the tank, then tried to pound out the dent by pounding on wooden sticks inserted through the tank's inlet. Since the dent could not be removed this way, the shop workers then welded rods onto the gas tank's outer surface and tried to pull the dent out. This did some good, but the dent was big and deep and still remained.

Internal rust was a secondary problem. We had already tried fixing a rusty Triumph tank using an acid kit and had less than great results. The procedure was hard to do in Wisconsin in the winter as it required repeated rinse outs with water. Our garden hoses were already put away for the winter and we were not keen on bringing a gas tank into the house. The small Triumph tank had been cumbersome enough and we couldn't imagine filling the Chrysler tank with liquid and trying to slosh the solution around to get it on all of the rusty areas.

It was clear that the only way to repair this tank was to cut it open, fix it using standard sheet metal repair procedures, treat the rust while it was cut apart and weld the halves back together again. Since cutting into a metal gas tank is dangerous (even if you think all gas fumes have been removed) we started looking for a shop willing to attempt such a repair. Although there are plenty of gas tank repair services that advertise in hobby publications and on the Internet, we couldn't find one that was willing to cut the tank apart to make a nice repair.

There was one listing on the Internet that showed a gas tank with a section cut rather crudely out of the top of it. Their advertisement said they could do this, but there was no response to the two emails we sent them.. We guessed that either they couldn't do the work, or they went out of business or (hopefully not the case) the last repair didn't go so well.

We had just about given up on getting the gas tank fixed when we ran into Tony Bukauskas of Mobile Services in Addison, Ill., at a the annual British Car Swap Meet at the Wheaton Fairgrounds. Tony had a beautifully repaired tank on display and it was cut in half. We asked him if this was done for display purposes only or if he could do the repair the way we needed it to be done. 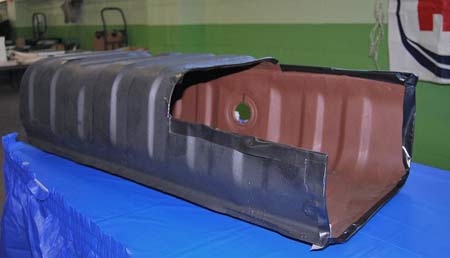 After nearly a year of searching for a repair system that would work, we saw Mobile Services Gas Tank RenU booth at a British car swap meet. 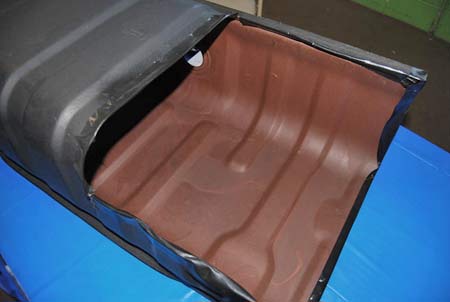 Mobile Services can split the tank, dolly the dents out, repair any weak metal to avoid leaks and coat the inside and/or outside with a rust proof material.

Bukauskas' told us that his company repair gas tanks and radiators for both the automotive market and the heavy-duty industrial market. He is one of about 25 dealers for a company called Gas Tank RenU, which we were already aware of. Unlike some other companies, Mobile Services was willing to do the cutting and sheet metal repair in addition to applying their Gas Tank RenU material to the inside of the gas tank to deal with the rust.

"We can cut your tank apart, media blast the inside, hammer out the dents, replace all the bad metal and coat the inside — or the inside and outside — with the Gas Tank Reno material and then bake it all in an oven," Bukauskas told us. "It's truly hard to duplicate this process and we've had good luck with it; that's why we came up with the only lifetime guarantee of this work in the tank repair industry."

Bukauskas said the price of a repair varies by the size of the gas tank, because larger gas tanks require the use of more material. The material is petroleum based, so cost fluctuates with the price of oil. "Right now, it's down a little," Bukauskas said. "When gas was $5 a gallon it was 20 percent higher."

For the specific tank we needed to repair, Bukauskas said his employees would probably split it in half, then dolly out. "We'd put all the ribs back into the metal, because you're going to have to have ribs where the straps go," he said. "It's probably all smashed up, so we would just dolly it like they did in the old days, weld it back together and then coat it with the material."

Bukauskas said he did these types of repairs frequently for restoration shops. Prices for a simple repair start a around $325. "Most of the tanks we do are less than $400," Bukauskas noted. "We do about 30-40 tanks per month and I would say the average price is $375, but if you have to cut them apart and do body work, it might be a bit more."

Since he finds that he does a lot of British car tanks, Bukauskas gets a space at the British Car Swap Meet each year. In addition to British sports car tanks, he has worked on others from Rolls-Royce, Duesenbergs, Packards and other classics. "Recently, we have had a run of Isuzu Trooper tanks," he pointed up. "I don't know why, but we had three last month so maybe it was a word-of-mouth thing. We also do a lot of handicap vans because those are expensive and people don't want to get rid of them just because the gas tank starts leaking."

Bukauskas told Second Chance Garage most of the old car work he does is what he calls "hit-or-miss." By that he means he does a lot of repairs for collector car that are not popular enough to have reproduction tanks available. "In the old days we used to get a lot of tanks from Corvettes, Mustangs and Camaros," he explained. "Now there are reproductions available for those cars, so that's not our market anymore; we do mostly tanks for the rarer stuff."

According to Bukauskas, Gas Tank RenU originally started in Canada because the roads there were so heavily salted in winter that gas tanks started leaking in two or three years. "Of course, back then they were not coated with zinc and the stuff we have now," he noted. "But that's how the company was founded years ago and it was focused on new cars until Spectra Premium started re-stamping tanks and then you could buy aftermarket tanks pretty reasonably.

Bukauskas said that the turnaround on a tank repair in his shop is "about a week." However, he warned that some tank repairs can be very labor intensive and the techs may have to spend easily a couple of days fixing one tank. The coating used on the inside is the same as that used on the outside, even if they are different colors. Some classic car owners prefer having only the inside coated. This is especially true for cars that had a tank painted body color.

A 1927 Rolls-Royce gas tank was one of the most interesting units Mobile Services repaired according to Bukauskas. "It was a gorgeous tank, but it was all soldered and riveted," he said. "We coated just the inside so it looked original outside. We also did a '50s Ferrari tank that was amazing. It had multiple baffles and was really intricate. You could see how it fit over the rear suspension. The work they did back then is really amazing. It makes modern stuff look simple." 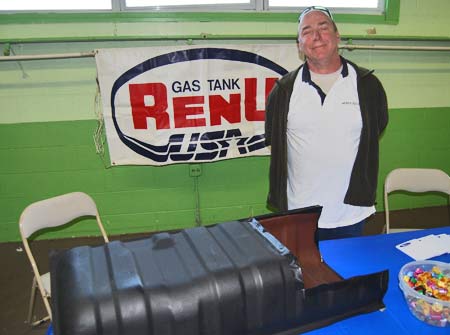 Tony Bukauskas of Mobile Services in Addison, Ill., didn't have to give us candy to convince us his repair was the perfect solution to our problem.

In addition to repairing tanks, Bukauskas can make new gas tank straps. However, he doesn't sell or install any other aftermarket accessories. He said he has been doing this work for 15 years and when he bought the company, it was already 20 years old. "We've been around a total of 35 years and we're well known in the Chicagoland area," he added. "But we get work from all over."