Restoration Ideas. Where do they come from? We can read an older book, peruse an article written from two decades ago, attend a seminar, overhear someone explaining their successes or failures, or see a recent video or TV show. During such a TV episode that aired in the late 1990's, where a man named Bob Vila hosted a series called This Old House, a method of recreating old fireplace mantel carvings set the wheels in motion for a simple method for making tail light lenses. This is a good example where one can look "over the wall" to another vocation and see how that artisan accomplished a given task. In this case, it jumped from an art sculptor to a house preservationist to a car restorer. Casting is not new, but knowing what materials are available and how to use them can make this task simple. For this article, we used clear resin materials from Smooth-On plastics for our molding process.

Two types of tail lights are covered in this article. The first is a TRILIN tail light assembly shown in Photo 1 which provided a red running light, an amber brake light and a clear reversing light in a single three-segment light assembly. TRILIN offered this three light assembly to both Phantom I Rolls Royce and 1929-1930 model L Lincolns. There is one difference between the two versions, the Rolls Royce stop light lens is a medium blue versus amber used by Lincoln. The clear reversing and colored stop lenses include groves or flutes in their glass face that are vertically oriented. Both Rolls Royce and Lincoln offered their car models with only one tail light which was mounted on the driver's side. In our quest to restore a collector car that offers the greatest amount of safety, we may want to include a second tail light on the passenger side. The dilemma this presents is how to include the clear and colored lenses knowing they are left and right unique. The answer is to use the original lenses as patterns to cast the lenses for the passenger side. 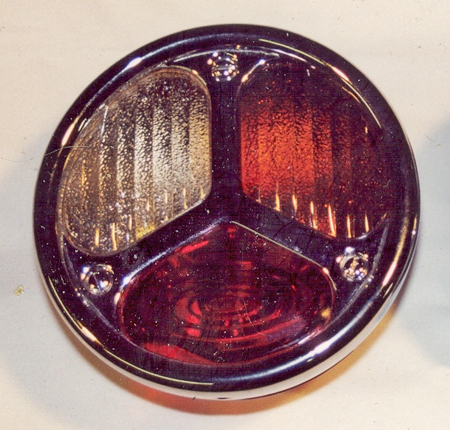 The second light covered in this article is a 1931 Lincoln model K tail light that included only a tail light and brake light (Photo 2). In this case, Lincoln made this style tail light for only one year and replacement lenses are hard to find. Lincoln decided to use the brake light also as a reversing lamp. The significant difference between theses two styles of tail lights are in the shape of the lenses. The TRILIN lenses are flat and much easier to reproduce whereas the model K light are curved. Both styles are addressed in this article. Reproducing these in glass would require making custom metal molds and a glass blowing facility (and artisans willing to accommodate this task) and would simply be cost prohibitive. 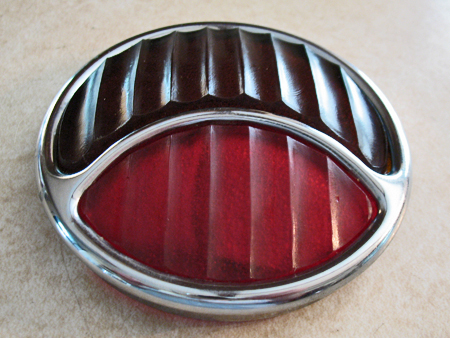 Casting for any part requires some thought on just how the molding and casting steps are followed. Any part needs to be oriented so that it can be easily separated from the mold and that any seam between joints doesn't show up in an exposed area. Luckily, the TRILIN lenses provide such a convenient location called a parting line, right at the bottom of the lens (Photo 3). The bottom of the lens where it meets the base will be the separating line. The model K lenses are another matter. Both of the lenses are curved and require adding a filler under the curved section when making the mold. A small handful of child's Play-Doh is pliable enough to form into the curved space and is flattened with a straight edge (Photo 4). Care must be taken not to apply to much pressure of the Play Doh filler to crack the lens. The two end points of the curved lens form the parting line for the mold. 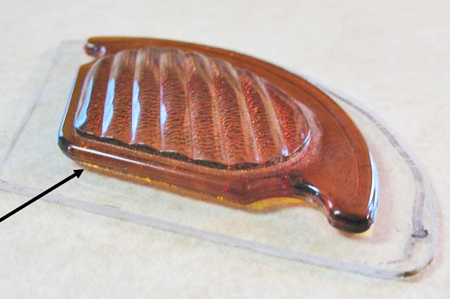 Photo 3 — The amber lens is placed on a flat piece of glass which will serve as the base for the first mold. The flange surface where the lens meets the glass base will be the parting line. 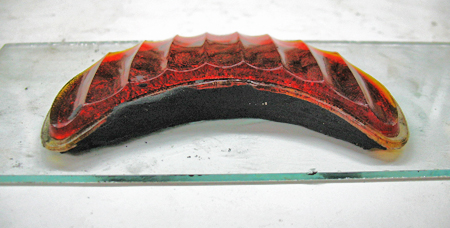 Photo 4 — A small handful of child's Play-Doh is applied to the inside of the original curved amber lens. This prevents the urethane from collecting under the lens while making the mold. The parting line is defined from the two end points laying on the glass and anything between them must be filled.

A rectangular form is created around the basic shape of the lens, leaving ample room on the closest edges. Strips of window pane glass were taped together and a placed on a larger sheet of glass. A small bead of silicon around the bottom edge holds the form to the base and also seals any of the mold urethane from leaking out. Glass was selected to form the molds as its easy to cut to size and the smooth surface easily separates from the urethane rubber. The lens is placed in the center of the form followed by a few sprays of molding release lubricant (Photo 5). Mixing the urethane rubber can be accomplished by either volume or weight. A digital postal scale set to grams (Photo 6) makes the one-to-one mixing ratio easy to follow, allowing for the net weight including the mixing cup. In this case 120 grams each of parts A and part B was mixed and the urethane rubber molding material is slowly poured into the form and allowed to dry. 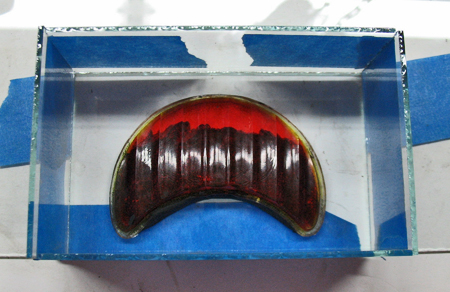 Photo 5 — The 1931 model K curved amber lens with Play-Doh behind it as a filler is placed on a piece of clean flat glass. Cut strips of glass are taped around the lens to make the side walls of the mold. Not seen in the photo is a small bead of silicon between the side walls and the base glass to prevent any of the molding urethane from leaking out. 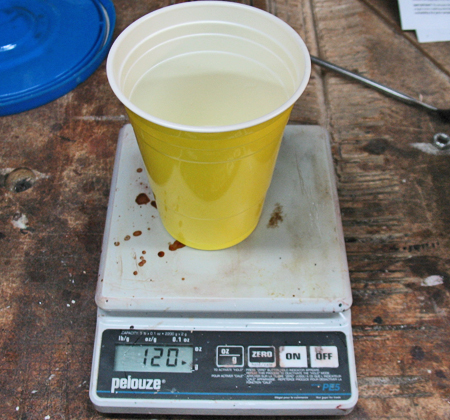 Photo 6 — A digital postal scale set to grams makes mixing the urethane rubber easy while adhering to the 1:1 mixing ratio. Don't forget to account for the weight of the cup as you measure your mixture.

After fully cured, the glass strips are removed from the mold and the mold inspected. In some cases, it may be necessary to remove traces of rubber that may have crept under the parting line of the lens. On the TRILIN lens, because the flange of the lens was flat against the glass base, no urethane rubber wept under it into the lenses depression. The lenses should be removed, cleaned, a fresh coat of mold release applied before adding the taller glass side walls and pouring the next batch of urethane to create the upper mold (Photo 7). The curved lens should also be removed from the mold and all traces of the Play Doh cleaned off and washed before preparing the mold for the other half (Photos 8 & 9). Preparation for the other half is much like the first just with the glass mold walls taller and positioned around the lower mold to form a tight seal. Apply light coats of the mold release before pouring the upper mold of urethane rubber (Photo 10). When completely dry, the glass side walls are removed with a little persuasion to reveal the upper and lower halves. Remove the pattern and set aside. The molds are now ready to pour the resin for the lens. Prepare the molds by applying light coats of the Mold Release. The surfaces of each half should also have a thin coat of petroleum jelly (Vaseline) applied to prevent the cured resin from adhering to the urethane mold. 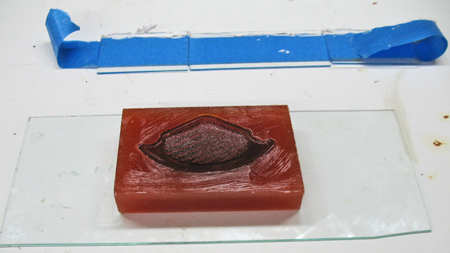 Photo 7 — The cured lower half mold of the amber TRILIN lens with the glass side walls removed. 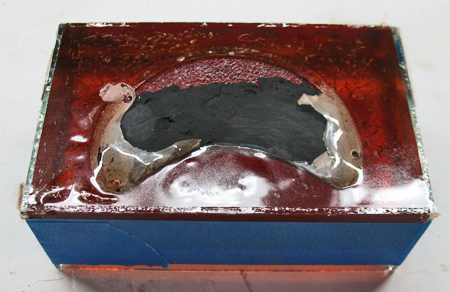 Photo 8 — The cured lower half of the mold has been removed from the flat glass with the side walls still attached. The pattern should be removed and any extraneous urethane rubber trimmed off. It then must be cleaned thoroughly before reinserting it into the lower mold.

Photo 9 — The cured lower half of the mold with the pattern removed. Note the Play Doh is still on the pattern and the original lens must be cleaned before making the upper half mold. 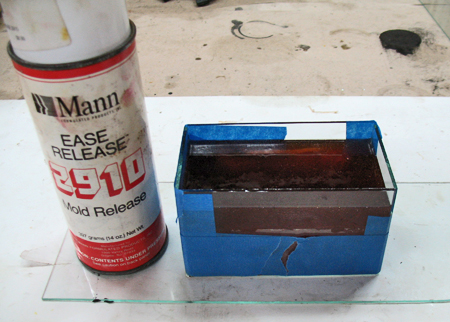 Refer to the Material Safety Data Sheets (MSDS) sheets for the product you are handling. In some instances contact or vapors can affect the skin. Use of protective gloves and face/eye covering should be used while the resins are handled.

A note about mixing resins. Mixing and pouring materials having a viscosity like molasses or maple syrup can take some time to get right. Invariably, when mixing, especially using small popsicle or coffee stirrer sticks, air is introduced into the mix. This occurs as the stick displaces the material at the stick's leading edge and creates an air pocket on the back or trailing edge of the stick. Sometimes using a round dowel like a chop stick minimizes this effect. The result is this unwanted air appears as small air bubbles trapped in the mixture. Any air bubbles trapped in the mold will likely be seen through the lens and could get caught on the lens' surface and should be considered as a defect. Mixing resins in this quantity (approximately 20 milliliters of parts A and B for these size lenses) are best measured and mixed in small plastic cups with milliliter graduations on the side (Photo 11). If mixing a resin that is tinted to a certain color, tint just one part (part A) of the resin before mixing in part B. Note, the color tints from Smooth-On are strong and when mixing basic colors for a blended or mixed color, small droplets of the color tints may be enough. The strength of the tints cannot be over stated. Practice and keeping accurate records of your mixture will assure repeat results. The amber in this article used 3 drops of yellow and a trace droplet amount of brown. (See Photo 12). 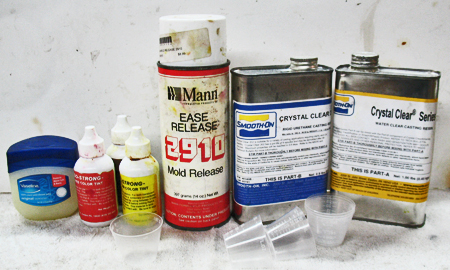 Photo 11 — Some of the products used in making this amber lens. Left to right, petroleum jelly (as a mold release), yellow, brown and red Smooth-On strong tints, Mann mold spray release, and Smooth-On Clear Casting resins. Mixing cups with milliliter graduations are in the foreground.

Photo 12 — The first attempt on making an amber lenses is shown next to the original broken lens. This is where keeping track of how much and what colors of tint were used. This one appears too orange. The next attempt of adding more brown made it the perfect color amber.

When mixing the resin, the air bubbles will slowly rise to the surface and pop, but our experience has shown this not to happen fast enough before the material sets up and hardens. One method to removing air bubbles is to use a vacuum pump. A large plastic disk (cover) with a nipple connected to the vacuum line placed over the mixing container may aid in removing air bubbles. If a vacuum pump is not available, pouring the resin at a high distance (18-24 inches) above the mold into a very thin stream often removes air bubbles as well. The bubbles travel down the stream and when the stream is thinner than the bubble's width, they pop. Carefully pouring from one container into another (like mixing a martini) a few times will aid in removing little air pockets. The final pour into the mold should be slow, like a muddled old fashioned. Some trial and error is needed to get the correct amount of resin to use. Not enough will leave voids whereas too much will simply weep out between the mold halves which can be removed after the resin has cured.