You've probably heard that businesses are going "paperless" these days, but at Gunner's Great Garage we're doing the opposite—kind of. We used what we call a "cardboard dashboard" to make the disassembly of a real dashboard easier. To adopt this system yourself, you'll need two large, long pieces of cardboard (or even one), a good marker pen and some electrical ties of different sizes in an array of different colors. Plus hand tools to take the real dash apart.

The dashboard from a late-1940s Mopar had already been removed from the car. It was a pretty nice piece, but some wood veneering was needed to make it perfect and that can't be done well with the dash in the car. We also wanted to buff the chrome trim, clean up the yellowed plastic pieces and restore any knobs that had worn or dimpled chrome plating. 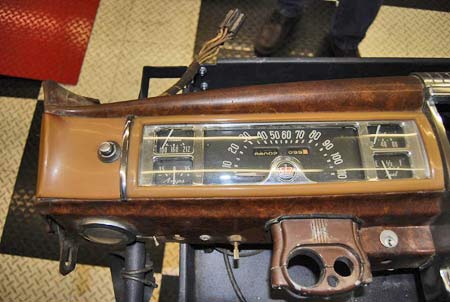 A new wiring harness will be installed on the back of this dash.

As is typical with 1940s cars, the Mopar had wiring covered with braided cloth that was originally color coded by running different colored threads through the braided cloth. Ever see the wiring in an old radio? Ever see it when its 65 years old? It's not pretty. New wiring harnesses are available, even though prices rose when copper did. To install a new harness, you have to remove the old wiring. Then, you have to attach the new wiring to the proper bulbs, switches, flashers, lights, gauges and other electrical components in the proper order.

Around the mid-1950s, Detroit went to plastic coated wires that came in different colors and smartened up by making every connector and connection unique so that proper hook-ups are easier. Up until around 1954 (in most cases) the old wires were covered with yellowish or black lacquered fabric that had either different color threads woven in for identification or distinctive patterns (i.e. a zebra stripe) used in specific locations. The problem is the fabric covering fades, making it hard to spot colored threads woven into the fabric.

A high-quality new harness made in the original way should have the same colors and patterns woven in. That means that the factory wiring diagrams (if available) can be followed. However, it isn't always easy to work with a fat "bundle" of long wires in the tight space behind a dash. It gets cumbersome to replace old connections with new connections one by one. It's much better for a restorer to come up with techniques to carefully record the removal of the old harness so that the new harness can be connected in exactly the same way.

"Take a LOT of pictures," restorer Jerry Kopecky once told us about rewiring a dashboard, With a digital camera, you can take hundreds of photos. "You can't take too many," Kopecky explained. "You can always erase the ones you don't need, but when you have a photo you really need to finish a project, you'll be glad you took so many." Kopecky even built a special "dashboard rotisserie" so that he could work on dashboards from different angles.

Ways to Back Your Photos Up

We didn't have a dashboard rotisserie so we color-coded all wiring connections on the back of the real dashboard. Then, we made a cardboard dashboard. With a marker, we made a rough schematic of the dashboard parts right on the cardboard. As we removed each wire from the real dashboard, we attached it to the proper spot on the cardboard dashboard. String tags were used to add notes where we felt they were needed. We also recorded each photo number in a notebook and added a written description of what the photo showed. 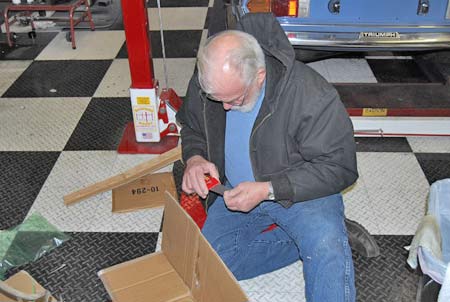 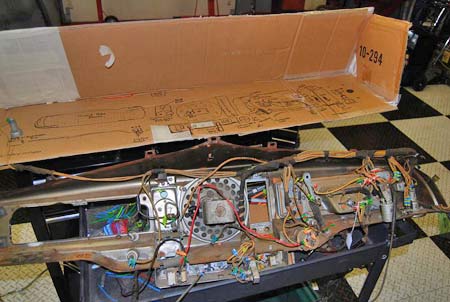 A schematic of the rear of the dash was drawn on the cardboard.

Every time we go to the parts store we look for colored electrical ties. We use ties of different colors to color code all types of connections from underhood plumbing to electrical wiring. With our dashboard, we started on the driver's side (working from behind) and put a single yellow electrical tie on the first wire we came to. The next wire got a blue tie and a yellow tie. The third wire got a yellow-blue-yellow combination. The fourth wire got a blue-yellow-blue-yellow combination and so on. We also use a black marker to number parts like bulb holders and directional signal flashers. We color coded other dashboard parts such as the speedometer cable, the line to the water temperature gauge, the speedometer cable, certain bulb receptacles and miscellaneous parts. 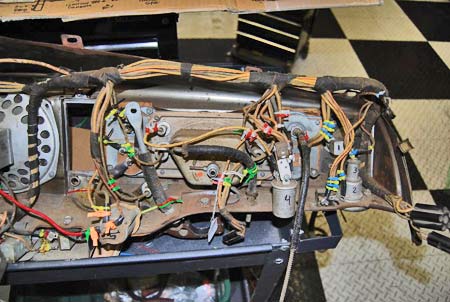 Colored electrical ties were used to color-code each wire or part.

Wires must be carefully traced to where they originate and terminate. Some originate in the main wiring bundle and others do not. For instance, electrical parts that only work when the ignition is on will have a wire running to the ignition switch. You must color code such wires at both ends. Sometimes several wires follow the same route. You can color code them all together. In other cases, two wires might originate in the same place, but terminate at different spots. When they do this, the wires must be individually color coded.

Just A Cut Above

Once the color-coding was done, we cut up a large, long box to get two panels that met at a crease. We cut out V-shaped end pieces and taped them on. This gave us a V-shaped piece about as long as the real dashboard. We then sketched the various components from the rear of the dashboard onto the cardboard. This was a fairly elaborate drawing, although it was not done to scale. The whole idea was to show all electrical connections and to then move the connections and associated parts from the real dash to the cardboard one. 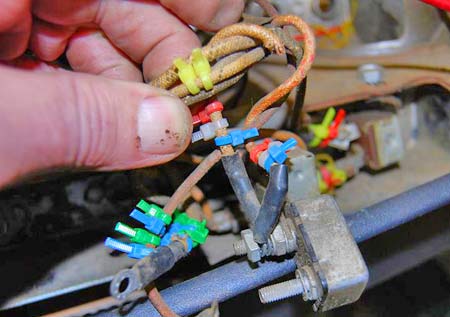 Parts were then removed from the dash and attached to the cardboard.

We turned a cheap staple remover into a bezel turning tool and removed the headlamp switch. Then, we used long electrical ties to attach the headlamp switch to the cardboard dash. We did the same with the heater switch. The cigar lighter was squeezed into a hole in the cardboard. Since our drawing was not to scale, a couple of wires couldn't stretch to where we had drawn their termination point. We taped them to the cardboard and drew lines to the proper spot.

As we sorted out different wiring, we noticed that a couple of connections were tricky. Some were almost hidden from sight until you really dug into them. Some actually had to wire connecting spots of a single connector. We used string tags with notes written on them at these locations. You should cover the string tags with clear tape to keep the notes from smudging. 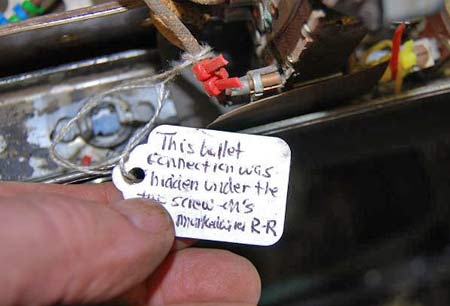 Important notes were attached to wires and parts with tie tags. 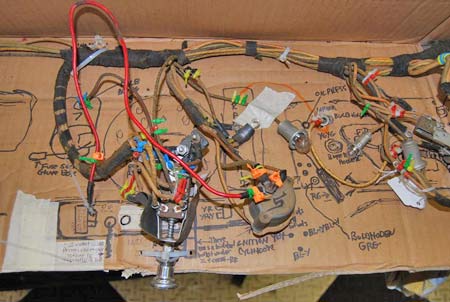 This part of the cardboard shows the wiring behind the instrument board. 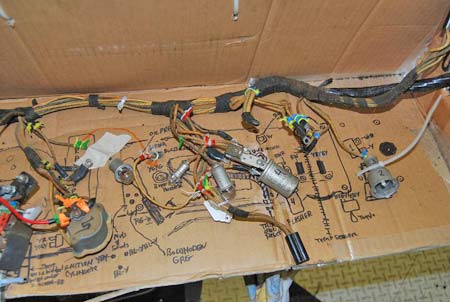 This view shows more of the center backside of the dash wiring. 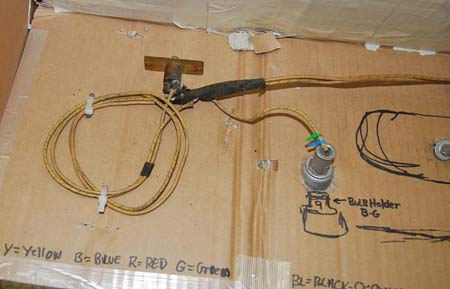 Wiring behind the glove box is a bit more basic. 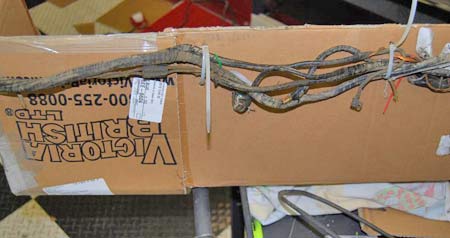 The remainder of the bundle was tied up behind the cardboard dash.

You Can't Be Too Organized

Since we've had problems re-attaching parts to a vehicle a year after we took them off, we tend to be triple safe when disassembling cars. So, we filled a couple of pages in a notebook with sketches, photos and written descriptions of how things came apart so we know how to put them back together again.

Re-wiring a car is part of most total restorations. Even cars being partially restored may also require some re-wiring. This type of job can be challenging work, but is you use the system outlined above, that wiring job will be easier.