A low-cost, high-performance vehicle, the Hudson Terraplane was linked with speed, excitement, and the fascination of flight. Built between 1932 and 1938, it was offered with this sales slogan: "On the sea that's aquaplaning, in the air that's aeroplaning, but on the land, in the traffic, on the hills, hot diggity dog, THAT'S TERRAPLANING".

Hudson Motor Car Company, founded in 1909 by Howard Coffin, George W. Dunham, Roy E. Chapin, and others, was named after its main backer, Detroit department store owner Joseph L. Hudson. One of its primary aims was to produce cars to sell for less than a thousand dollars but it was also an innovator in producing closed models to keep the weather sealed out; installing the steering wheel on the left; and utilizing self-starters that made ignition safer and easier. 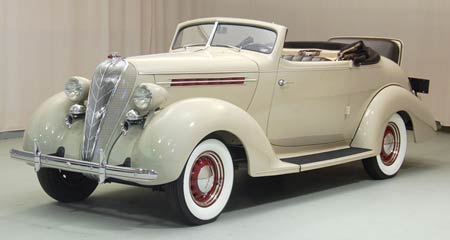 The first Hudson, a 4-cylinder model, claimed instant success and led Hudson to 17th sales place by 1910. In 1912 it introduced the Hudson Six engine and by 1914 claimed to be world leader in 6-cylinder sales. The first truly affordable fully-enclosed automobile, the low-priced, steel-bodied 4-cylinder Essex was offered in 1919. By 1925, with factories in the U.S., Canada, England, and Belgium, Hudson utilized the Essex to boost its sales into third place behind Ford and Chevrolet. Hudson's peak came in 1929 as it produced about 30,000 Hudson and Essex cars in plants worldwide.

As sales declined, though, and the Great Depression sank businesses nationwide, Chapin (having returned from an assignment as Hoover's Commerce Secretary) decided to launch a new car that, because it was cheaper to manufacture, could be sold for less. It was risky to bring out a new model when the market was depressed but he was betting on a less expensive car that was smaller and lighter, combining style and comfort with power, durability, and reliability. Chief engineer Stuart Baits designed a frame requiring less steel, reducing the Essex wheelbase from 113 inches to just 106 inches and utilizing a narrower track. The results were an incredibly strong chassis welded at about 30 places to keep the structure rigid and a car weighing 400-500 pounds less than the Essex. Its engine was a 6- cylinder that had been enlarged from 160 to 193 cubic inches, raising hp from 58 to 70. Frank Spring designed the Terraplane body using a tapered, streamlined design meant to evoke earthbound flight.

On July 21, 1932, the new Essex-Terraplane was launched with an exceptional public relations campaign. Famed aviatrix Amelia Earhart was on hand to introduce it and more than 2000 dealers arrived in Detroit to get their bronze-colored demonstrator models, the only way those models became available to them. As those dealers headed home, there was quite a parade of outbound Essex-Terraplanes. As the owner of one of the first cars off the line, flight pioneer Orville Wright joined those early Essex-Terraplane adopters. Newspapers all over the country printed accounts of the start-up of the new-fangled Essex-Terraplane.

An optional 8-cylinder engine was available for the 1933 Essex-Terraplanes, an engine identical to the Hudson except for the Hudson's larger cylinder bore and greater displacement. The Essex-Terraplane 8- cylinder cars seem to have been favorites with noted gangsters of the time - Dillinger, Baby Face Nelson, and others. The cars were lightweight, accelerated quickly, and handled well - just the thing for a road race when the police were in hot pursuit. In numerous race events, particularly hillclimbs, in fact, the 8-cylinder Essex-Terraplane set multiple records, some of which remained unbroken for years.

In 1934 the car's marque became simply "Terraplane", dropping the Essex tag; the Terraplane name would remain through the 1937 model year. These cars were fast (testing 0-60 mph in about 15 seconds , in high gear 10-30 mph in 18 seconds, with a top speed of a little over 80 mph), economical (25 mpg), lightweight (about 2800 pounds),and cheap (base prices were a little more than $400 though later models ran to nearly $900). Because they were appreciably lighter than other cars, they had a better power/weight ratio, ran quietly, and were popular as family cars. In 1935 and 1936 Terraplanes accounted for roughly 75 percent of Hudson's sales. 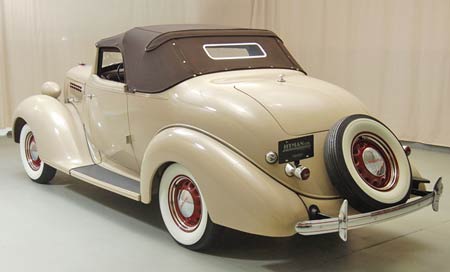 The 1936 6- and 8-cylinder models introduced a number of advanced engineering features. Their engines ranged from 93 to 124 hp. And they had "true-line steering," which kept the steering returning to center and let the car hold its direction unaffected by road conditions. Because the axle was held in place side-to-side by two arms (rather than springs), the car could be stopped in a straighter line, as well. Terraplanes also featured a smoother "rhythmic ride", due to utilization of oil-cushioned shock absorbers and longer, softer leaf-springs. Despite current connotations that might make it seem a little racier than most other automotive components, the improved "Electric Hand" was simply an electro-mechanical shifter mounted on the right side of the steering column used to shift gears at the touch of a finger, providing silent, easier, safer shifting at any speed. It replaced the floor shift, freeing front seat space, though drivers still had to use the clutch.

Then there were the elegant styling features. Available in sedan, 2-passenger coupe, or convertible coupe, Hudson offered the first all-steel car body. The Terraplane's exterior paint selections included Tuscan tan, Pepper tan, Vineyard green, Glacier blue, Tepee brown, Hudson blue, Neptune gray, and Sage green, each hue set off by chromed bumpers. The main front attraction was a large chrome waterfall grille that appeared as an inverted teardrop with a slim divider in the center and vee-shaped ribs. Bracketing the grille were two perforated panels that made some think of a fencer's mask. The Terraplane also boasted chrome bumpers and a modern, lighted, rocket-shaped hood ornament of red plastic with chrome accent. Its instrument panel with easy-to-read, oval gauges came in a brown walnut finish. The roomy interior offered ample space for six passengers, and both front and rear seats had plentiful leg room. Upholstery came in standard mohairs or worsteds, some utilizing two-tone fabrics not usually seen in cars. Both the driver's seat and the steering wheel were adjustable, features not then standard. The luggage and tire compartments were increased in size, rivaling space available in much more expensive models. The automatic draft eliminator was another, early attempt at climate control. Weather-tight doors and a wide-cowl ventilator provided passengers with fresh air drawn in by the cowl, passed through a filter, and distributed through a small, rear floor opening. As one advertisement put it, "If you want to step up in everything but cost, this 1936 Terraplane is your automobile!"

Discounting the front suicide doors, Terraplanes also appealed to the safety-conscious. With what was called the world's first safety-engineered chassis, they provided radial safety control. Two large, forged steel arms held the front axle in place so steering or braking would not move the axle. They also had duo-automatic brakes. Those were chief engineer's Stuart Baits's idea after he'd been injured in a brake-testing accident. His "double Safe" system utilized hydraulic brakes but if the hydraulics failed, at the bottom of the brake motion the driver could still apply emergency mechanical brakes to the rear wheels.

The Terraplane caught the popular imagination, with noted blues man Robert Johnson writing and recording his famous "Terraplane Blues" in 1936. In that song the Terraplane becomes a stand-in for sex. When the car won't start and suffers other mechanical difficulties, the singer suspects his girlfriend may have let another man drive it.

Despite the popularity of the Terraplane, in 1938, following disappointing sales, Hudson management determined to phase it out, renaming its '38 production unit the Hudson-Terraplane. In that same year Hudson also offered the Hudson 112 whose equipment was virtually identical to that of the Terraplane, effectively killing the Terraplane brand.