How It All Started

Sir William Lyons, president and co-founder of Jaguar, loved fast cars. He committed his company to the racing circuits immediately after World War II and by the mid-50's his engineers had achieved what few had done in so short a time — multiple wins at Le Mans.

Lyons knew that Jaguar would pay its bills by producing saloons (big, luxurious sedans), but his heart was in high-performance sports cars. In 1948 he and his development people introduced the voluptuous XK 120 sports cars, so named for their guaranteed top speed in miles-per-hour. In 1955 the XK140 took over the high-performance reigns, followed in 1958 with the XK150, named also for their respective top speeds.

During this time period, Jaguar introduced the D-Type, a dramatic grand-prix racer which would become the prototype for the production E-Types seven years later. It was powered by the XK engine, Moss gearbox, fully-independent rear end and was the first racer to have 4-wheel disc brakes.

The Jaguar company made engine blocks for tanks as well as other machine parts during the war. Sir William realized at war's end that he had a 6-cylinder engine block on which he could build his vision of a reliable, high powered machine. Such an engine must have a very free-flowing cylinder head design and be capable of high revs. Dual overhead camshafts were the answer, as were multiple carburetors. Several prototype engines were built and tested, each called "X", for experimental, and A,B,C, etc., until the right overall design was reached. The "XK" engine was thus born in 1948 and it was everything Sir William wanted. It was a rugged, powerful motor which would serve Jaguar in more or less the same form for more than 40 years.

The XK engine, first at 3.8 and then at 4.2 liters and fitted with triple SU sidedraft carburetors, put out 265 horsepower in its 1961-1967 forms. Late 60's emissions regulations caused subsequent losses of power and the final, series III XKE's were powered by 245 horsepower V12's, a triumph of useless complexity over good engineering. The 6-cylinder engines were, and still are, the more powerful and by far the most beautiful engines ever built by Jaguar.

By the late 50's Sir William, spurred by the successes of the D-Type and XK 150, made the decision to make a new sports car for the 1960's. His demands were simple:
·It must be capable of at least 150 mph
·It must equal or exceed the performance of Ferrari and Corvette, Porsche and Mercedes
·It must be the most beautiful sports car ever produced
·It must sell for half the price of Ferrari and Mercedes, and little over Corvette

No small feat, eh? Well, it might have been impossible for anyone else at the time, but Sir William had the talents of aircraft designer Malcolm Sayer, who created arguably the most distinctive and beautiful body design ever produced. Also on hand was chief of engineering William Heynes, the brains behind the XK drivetrain. Both men were given a free hand to develop the E-Type.

What came out of the design studio and conference rooms for its debut at the 1961 Geneva Auto Show was the stuff of legend! The crowds were so taken with the E-Types that other car company's display booths started closing early, so little interest was being paid to them. The public simply went crazy. 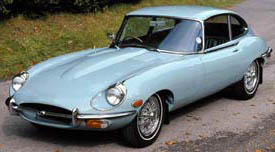 The beauty of the E-Type (called the XKE in the US) was all the more impressive when one considers that it was essentially a collection of bits and pieces of the D-Type's body, a modified version of the XK 120's front suspension and the XK 150's engine, gearbox and front disc brake configuration. Added to these components was the most complex rear axle assembly ever fitted to a production car. With more than 1500 parts and 16 grease fittings, the fully-independent, inboard-mounted disc brake rear end had the ability to produce a smooth ride while enabling the car to corner flat over the roughest surfaces. It could also handle up to 500 ftlbs of torque, although no Jaguar engine ever approached that level. In fact, actual dyno tests of XKE engines showed 200 hp outputs for both 6 and 12 cylinder versions. Considering the staggering weights of these engines their power was paltry!

Car and Driver said of the XKE:
"The new XKE is a pleasant blending of go and slow, capable of 15-second quarter miles and top speeds of over 150. It will cruise all day with the speedometer needle stuck well in the three-figure bracket...it looks racy even when sitting in a dentist's parking lot. It has an English quality of tasteful understatement...it's obviously capable of going terribly fast, but it would rather not tell everybody..."

To top off everything, the XKE sold for £2196 (about $5000). To sum up the worldwide impression of the car at the time, it was spectacular. It was rolling sexuality, elegance, prestige and performance all in one package. The leather-trimmed interior was richly appointed everywhere and was set off by a multi-instrumented dashboard, equipped by the now famous row of toggle switches. The most hideously unattractive man who could afford one during the 60's had no trouble attracting women. Everybody loved being seen in one.

The Test Of Time

Back in the mid-60's, the XKE was a terrific British sports car, but not nearly as reliable or neck-snapping fast as a Corvette (Lucas electrics and torque, in that order, being the reasons). It had excellent acceleration from 50 mph on out and its ride was better than any other sports car of the era. The 4-wheel discs, though, were heart-stoppingly inadequate at high speed but did resist the fading problems that plagued drum-braked cars of the time.

Even though the E had that superb rear end, the heavy engine/gearbox made it front-heavy (the whole car weighed 2700!). That made for rather sloppy hard-cornering and its racing efforts showed it. Its race-bred drivetrain simply didn't translate to a luxury sportscar, but no one seemed to care at the time.

Driving the XKE on a warm day is very uncomfortable, since the exhaust heat cooks the passenger cabin. This is a car for pleasant drives and for getting attention, not for taking a trip from Boston to Washington.

The great British race driver Stirling Moss said of the XKE, "It's the dumb blonde of high-performance cars." True, the XKE is a high-maintenance car that is still gorgeous today. They can be found for as little as $500 for an F-condition car, $15000 for a C-condition, up to $40,000 for an A-level show car. Parts are readily available but can be pricey, but many of them are common to other British cars of the era.