Let's get one thing straight from the beginning, headlights are "headlights." One magazine carried a long story about why they should be called "headlamps." Well, many years ago, cars used to have kerosene lamps that required fuel and actually had to be lit. But since about 1910 or so, those devices pointing the way home at night were changed to electric lights. During those 100 years, a lot of different methods have been used to attach headlights to vehicles. Restorers often have to deal with detaching headlights to repair or refinish them.

On the surface, an article on detaching headlights seems a bit basic. After all, on relatively modern cars, we're talking about twisting a trim ring, removing a few screws, unplugging an electrical connector and juggling a lens, a chrome ring (door), a housing (bucket) and a couple of screws. What could be easier?

While this is basically true, there's more involved if you're restoring a car, rather than just tearing it down. For instance, on a recent project involving a rare British-made 1960 Daimler SP250 sports car, the removal of the left- and right-hand headlamps...er, headlights and the fender tip turn signals connected to the same wiring bundle took a professional restorer the better part of two hours to accomplish. Depending on hourly shop rates, that makes it an $80-$200 job or — looking at it another way — up to $200 that a car owner could save doing it her/himself.

Admittedly, any 12-year-old kid (at least such a kid in the pre-computer era) could rip all this stuff off a car in 15 minutes or so and toss the pieces in the garbage. The time-intensive aspect comes in if you're planning to "save the pieces" and ultimately restore the headlight assembly to look new and work well. Restorers must also deal with overcoming any mistakes that the DPO — Dreaded Previous Owner — or his repair people hired over the years have perpetrated.

According to the shop manual instructions — which for British cars are written in proper English — this job was supposed to start by "springing" the chrome headlight rim off the circular glass lens. To we Americans, this means pushing the ring in against springs so that it can be rotated slightly.

On most 1960s cars made anywhere, the ring has three tabs coming off it each 120 degrees around the circle. These tabs have a slot that widens in one direction. The ring is spring-loaded and the tabs push over small attaching screws. As you push in against the springs, you can rotate the chrome ring so that the wide part of the slots on the tabs fits over the heads of the attaching screws. Then, as you rotate the chrome ring in the opposite direction, you move the narrow ends of the slots behind the heads of the attaching screws and the screws then hold the ring in place after you release pressure against the springs. 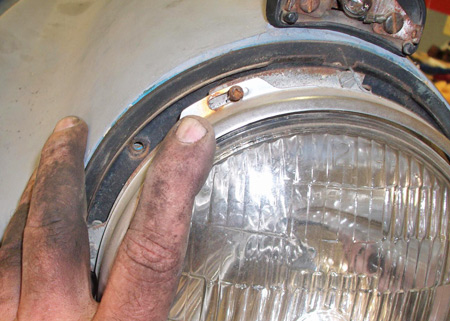 To get this chrome rim off you must be able to rotate it clockwise so that the wide part of the slot being pointed to lifts over the screw. 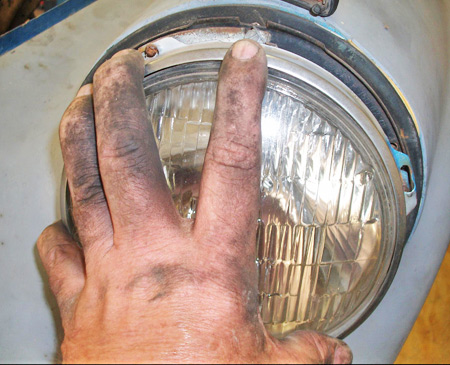 In this photo the chrome rim has been rotated so that the slot will lift over the (rusty) screw. 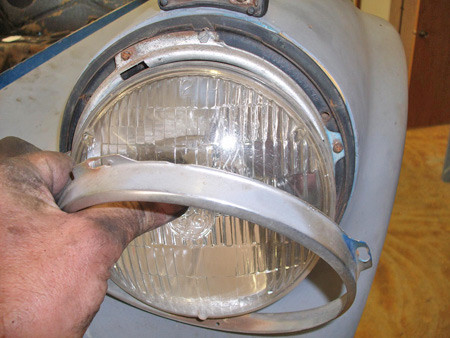 Removing the chrome rim is the first step in headlight removal.

The chrome ring on the Daimler would not rotate regardless of the amount of pressure we put against the springs. At this point, the 12-year-old of pre-computer times would simply work a big screwdriver under the ring and pry it off, twisted metal and all. Rather than pry, the restorer probes. One problem was that the springs were rusty and not moving enough, so this requires spraying them with WD-40 and waiting for it to soak some rust off. A second problem was that someone had made the attaching springs too tight. They also needed a shot of WD-40 and careful counter-clockwise turning with the proper screwdriver.

The real restorer knows that turning out rusty screws like these also takes a bit of finesse. There are probably a zillion different types of screwdrivers for "X" slot fasteners and not all of them are "Phillips Head" drivers. To remove rusty fasteners — especially very tiny ones — it is essential to use a driver that fits tightly in the slot. Also, you shouldn't "twist from the wrist" to attempt getting such screws out. Force the proper driver hard against the slot in a horizontal plane, keeping the shaft as level as possible, and twist slow and hard with lots of torque. You may still need a new fastener later, but at least you'll get the old original one out without totally destroying it.

With the chrome ring off, the glass lens dropped out of the bucket behind it. On the back of this lens was a round connector with three wires at approximately the 9 o'clock, noon and 3 o'clock positions. Originally, each of these wires probably had distinct color marking, but on this weathered sports car, two looked gray and one was black. We took a picture to show the wires and we later labeled the "center" wire with a string tag. Combined with the photo (don't lose it) this tag provides enough info to re-connect the wires the proper way. 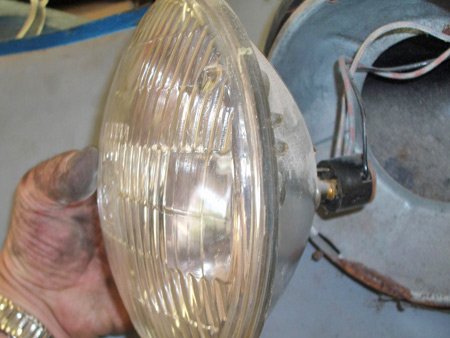 A round black connector with two gray wires and one black wire brings juice to the headlight bulb. 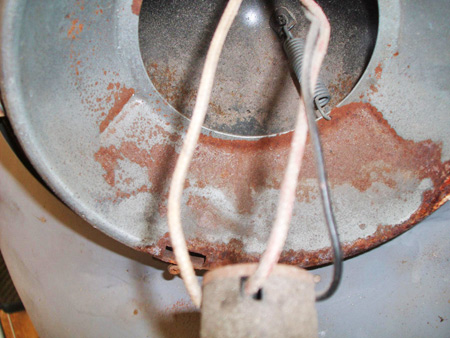 If you take a digital photo like this one and save it, you can get by tagging only the center connection with a tie-on string tag. 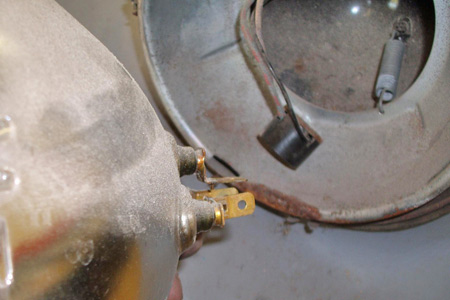 Three metal prongs plug into the black connector. Pull the connector off of them to release the headlight lens and bulb.

The shop manual said that the headlight wiring bundle should be disconnected from the main harness. We discovered that the turn signals in the tips of the fenders, above the headlights, were also connected to the same wiring bundle. Removing these lights (the lenses were already off) required additional dealing with rusty screws and these were of the straight-slotted type. Luckily, they were fairly hefty screws and, after a dose of WD-40 and a short wait to let it soak in, the screws were easily removed. Very small slotted screws that are rusty can be much harder to deal with without ruining them. It was important to take a close-up photo with our digital camera that showed that the screw nearest the middle of the car had a small ground wired that attached to it. 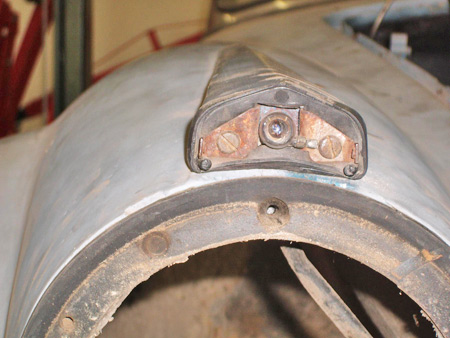 This turn signal unit is on the same wiring bundle and should be removed with the headlights. Note the grounding wire behind screw to your right.

Once the screws holding the turn signal housing were loosened, we needed to remove the metal housing and the rubber grommet. We thought these could be pushed through and taken out the rear of the fender, but this was a no-go and the housing actually got stuck in a round hole at the bottom of the fender opening. Most likely a metal car would not have had this hole, but the Daimler has a fiberglass body so there is a little more structure to the fender and the round hole was added to pass the wiring through. As we said, the signal light housing would not pass through, so we had to free it up and take it out the front.

Removing the headlight/signal light wire bundle from the main harness required some "investigative" work and more tagging. The actual connection was made with "bullet" connections (which the Brits love) and it was fairly easy to pull the bullets out of the tubular connectors by carefully tugging with a needle nose pliers. To be safe, grab the wire with the tip of the pliers near the spot where the bullet is attached to it and pry patiently with an easy, wrist rolling twist.

As mentioned, actually separating the bullet connections was easy, but tracing the wires back to where they were connected required the removal of some taping (probably an old re-tape) and paying careful attention to the color coding. A red wire has to connect to a red and a red with blue stripe has to connect to the same. Problems come in where age has worn off stripes so that you have two red-wire connections. To be safe, we used string tags on both sides of all connections. If there were three connections, we tagged them A, B, C and tagged the corresponding wires the same way. Later, we just have to re-connect them in the same alphabetical order.

Often, we will fold the string tags up like a tiny accordion by folding them in half, then in half again. This protects the notes that we write on them from getting dirty and greasy and keeps the ink from wearing off. It also allows the string tags to pass through rubber grommets used on the body parts and firewall. After all the lighting wires were removed from the main harness and clearly tagged, it was onto removal of the headlight housings or buckets. 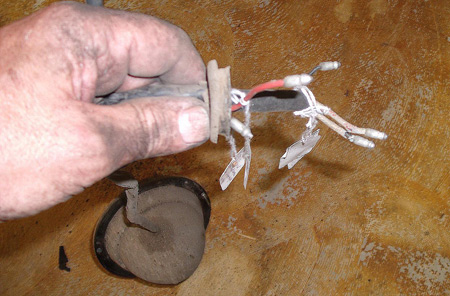 Lighting wires have bullet connectors at their ends that snap into these black rubber connectors. If color coding is faded or changed, tag all wires. Here all of the wires have been labeled with string tags and the tags are folded so they can pass through the rubber grommet.

On this car, the buckets were attached to the fender by three screws, but these were only partly exposed. The bucket was a "nose cone" shaped stamping, but it had a black painted rim around it and the screws were tucked in between the two parts. To twist them out, you had to put a large straight-blade screwdriver in the slot at an angle and work them out using the driver blade in the outer part of the slot. As the screws rotated, the blade had to be moved towards the outer end again. Luckily, the screws weren't very long and came out easily. 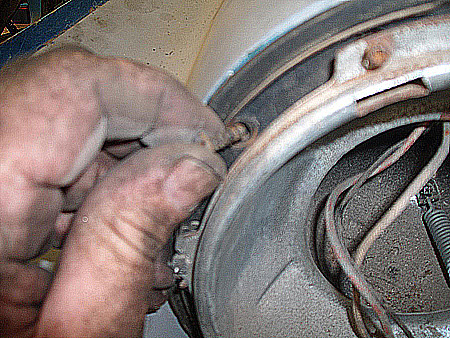 With three screws like this one removed, the headlight bucket can be pulled from the body of the car. 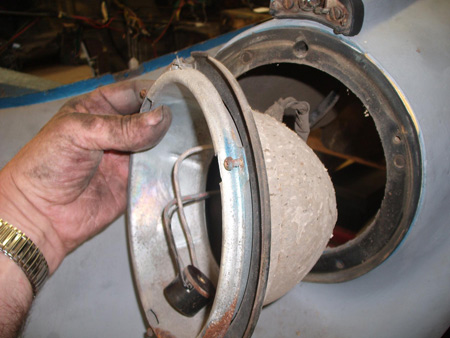 This headlight bucket will need a lot of refinishing. On cars with reflectors and bulbs, the reflectors sometimes require re-silvering.

The only step left was removing a large rubber gasket that keeps moisture from passing through the headlight opening. Due to age, it was slightly stuck, but a flat blade screwdriver helped free it. The gasket had two "nipples" on the rear that help position it properly, so we took a picture that shows what holes they have to fit in. With this, our first headlight removal was done. As you see, it was all nuts-and-bolts stuff, but it takes time to do it right, preserve the parts and document each step so you can put things together again. And if you do it yourself, you can save a bunch of money. 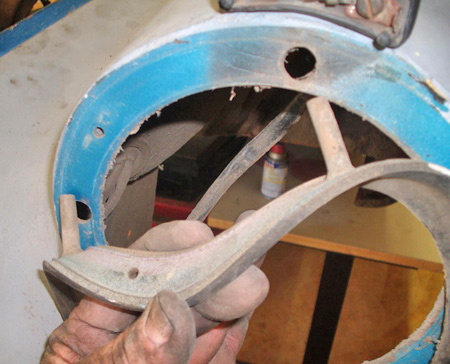 This particular headlight gasket has positioning nipples that have to go in specific holes, so snap a photo.