Robert McNamara once was quoted as saying, "Everyone in America should be driving Falcons." As Ford's President during the latter part of the 1950s, McNamara's personal philosophy of conservative lifestyle rubbed itself off on all of the company's products until he left in 1961 to become, arguably, one of history's most hated political figures.

He was eventually proved to be wrong on most of his beliefs, but he was absolutely correct about the Falcon. The Falcon — at least its platform — turned out to be the most successful car the Ford Motor Company ever thought up. Its derivatives (Comet, Fairlane, Mustang, Cougar, Maverick, Granada, Monarch and Versailles) eventually sold over 19 million units.

The Falcon was the result of Ford management's awareness of growing public demand for small, efficient cars. In 1957 the decision was made to build a high-quality smaller car that could seat 6 passengers in relative comfort. It was code-named XK Thunderbird at first, and the name "Falcon" was chosen from nearly 10,000 candidates, including such names as Lavion, Astrion, Cougar, Raptor and many others.

By the time Product Planning started work on the car, management had decided that it would be powered by a 6-cylinder engine, 13-inch wheels, a 109.5 inch wheelbase and a generously-sized trunk. All designs were the result of tremendous give-and-take among various groups at Ford, and the final one was signed off for the 1960 model year. Although the entire program only took 19 months from final design to the first car off the assembly line, the Falcon itself turned out to be a high quality, reliable and pleasant-to-drive car. It only lacked pizzaz, in the form of trim, accessories and power.

Lee Iacocca took over as Ford's General Manager in 1960, as McNamara was walking out the door and into history. Iacocca was a marketing guy, plain and simple. He intuitively knew that if the company could create a high performance image it would sell more products. "Race on Sunday, sell on Monday," was Iacocca's mantra, but the first problem he had to overcome was the Big Three's ban on motor sports, dating from the 1950s.

Iacocca's other problem was Henry Ford II. Henry didn't want to upset the status quo, so Lee adopted a different strategy. He added trim and body styling options to the Falcons from 1960 to 1963 and then, to prove the Mustang "formula" would be successful, convinced Ford to build a few V8 Falcons to run in the 1963 Monte Carlo Rally.

Ford agreed, and Iacocca immediately added bucket seats, center console and deluxe trim details to the Futura package, along with a 260 V8 derived from the Fairlane, in preparation for a new "sporty" model called the Sprint. Meanwhile, he had Holman & Moody in Charlotte, NC build the Rally Falcons. The cars were shipped to Europe and they proceeded to win their class at Monte Carlo, followed by overall wins in the Tulip, Geneva and Mexican rallies, plus a class win in the Alpine rally. A ninth-overall win in the Trans-Canada Rally of 1963 capped off a successful season and Ford was back into motor sports.

Meanwhile, Iacocca cashed in on the Monte Carlo win and immediately released the Sprint package for Falcon. This consisted of a 164-horsepower version of the 260 V8, sports trim, a dash-mounted tach, woodgrain steering wheel and, of course, bucket seats. Dealers sold 10,000 of them before summer.

Les Jackson (one of Second Chance Garage's contributors) owned one of the Monte Carlo Sprints back in the mid 1960s. After putting over 100,000 miles on its Holman & Moody racing engine he sold the car to one of a large number of friends who wanted it. This was in 1969. Over the years he came to regret selling the Sprint and, 30 years later, sought out the VIN # in the Texas (that's where the buyer moved) DMV.

As luck would have it, the car — or, more accurately, what was left of it — was still listed on the records. Les contacted the owner and found that the original car had basically worn out. The four dual-downdraft Weber carbs and intake were gone, as were the prototype front disc brakes. The original Holman & Moody 260 V8 had been replaced by a 289 and the shifter was missing from the rugged old Borg Warner T10 transmission. The car had clocked over 300,000 miles and barely ran, but rust was minimal. 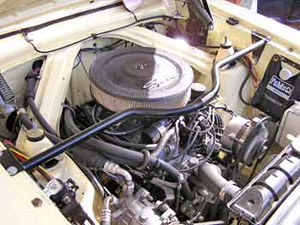 The 289 cubic inch engine sports a modern Edelbrock 4-barrel carburetor and looks identical to the original 260. 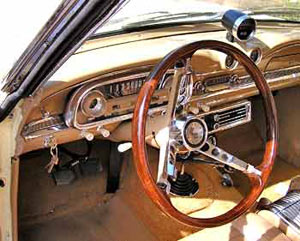 The original plastic "wood look" steering wheel has been replaced with a "real" wood one.

Les stuck a deal and shipped the car home. Since much of the original (valuable) racing equipment was gone he decided to restore the car as a "driver," complete with air conditioning and several details he had always wished the car had been equipped with. For instance, he had always wanted the plastic wood-grained steering wheel to be real wood, so that transformation was made during restoration. He also wanted to fare-in the mid-dash instruments that the Rally cars had, mounted in a pod similar to the later Shelby Mustangs. New front discs were added, along with extra sound insulation. 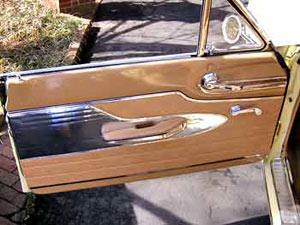 The driver's side door panel. 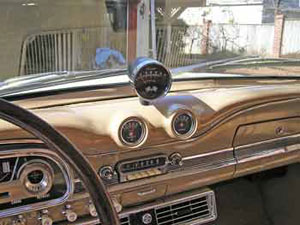 The mid-dash instrument pods are similar to those found in Shelby Mustangs. 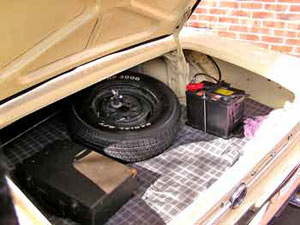 Moving the battery to the trunk improves weight distribution.

Eighteen months later the Les's Falcon Sprint restoration was completed, with the car now finished in a pale yellow exterior and "palomino" interior (the original car was white with a red interior.)