Oldsmobile at 100 — The Early Years

The year 2001 marked the 100th (and, sadly, the last) anniversary of the Oldsmobile brand. The cars from Oldsmobile were always interesting, often innovative and proudly owned by millions. Before they go away entirely, we thought it would be a good idea to give a short history of the early years of the only automobile brand to survive from the late 1800's to the early 2000's.

Ransom E. Olds was born to Sarah Olds on June 3, 1864 in Geneva, Ohio. He was the son of a blacksmith named Pliny F. Olds, who eventually moved his small family to Lansing, Michigan in 1880. Within a few years Pliny and his eldest son Wallace had a successful machine shop established and were building steam engines for the burgeoning industrial age.

By the end of the decade the Olds family enterprise had enlarged its operations and taken on Ransom as a partner. He and his father were doing so well that they employed over 20 men and incorporated the Olds name in 1890, selling shares to investors. Ransom himself was fascinated with machinery of all types. He built flash-boiler steam engines on his own and had equipped a horseless carriage with one as early as 1886.

Another steamer built by him was sold in 1892 and shipped off to Bombay, India. It reputedly could travel at 15 mph and had 4 horsepower. This "car", according to Oldsmobile historians, was in all likelihood the first U.S. automobile ever sold and exported.

Ransom E. traveled to many technical fairs and was aware of the early gasoline engine designs of Daimler and Benz. These engines functioned on the four-stroke (Otto) cycle, on which Ransom began working himself. In 1895 he applied for and received a patent for his "vapor engine." The following year he mated one of these engines to a tiller-steering four-wheel carriage and demonstrated it for a Lansing newspaper, only weeks before Henry Ford demonstrated his original "quadricycle."

From that humble beginning Ransom E. went full-bore into the automobile business, and in 1896, issued an advertisement for a gasoline-powered vehicle for the sum of $1000. The gasoline automobile was gaining tremendous popularity worldwide during this time and Ransom's machine looked so promising that he and several other Lansing citizens formed the Olds Motor Vehicle Company on August 21, 1897.

The Olds Motor Vehicle Company, with Ransom as its president, built four self-propelled vehicles in its first year and displayed them at many county fairs. Family holdings in the Olds engine company eventually led to absorption of the vehicle company and in 1899 the Olds Motor Works was formed, eventually to be bought by General Motors some years later.

Ransom spent his time doing what he loved most and kept building motorized vehicles, including electrics. It was in 1900 that the first Oldsmobile was built, the name having been suggested by an employee of the company.

In 1901 advertisements for the Oldsmobile Curved Dash Runabout appeared. At a selling price of $600, Ransom and his company had orders for over 300. A fire at the plant necessitated a relocated production facility and production was unable to keep up with orders. Engines, therefore, had to be purchased from the Dodge brothers, so Oldsmobile became the first auto company to "source" components. 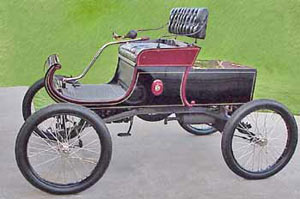 The Curved Dash was a wooden carriage built on top of tubular steel axles. A main leaf spring linked the front and rear axles on each side. Steering was done with a center tiller and braking was done by a pedal that caused a steel band to clamp around a cast-iron flange in the planetary transmission. Since the transmission was coupled to the drive chain, any failure there meant no braking. The transmission had reverse gearing and a high-speed clutch and the wheels were wood spoke on which tires were mounted.

What the Curved Dash had going for it was reliability. Olds hired Roy Chapin to drive one form Lansing to the New York Auto Show in 1901 and he made it, making the Oldsmobile an instant national success. Oldsmobile thus insured its place in the automobile industry and Ransom became the "father" of the U.S. auto industry.

Ransom E. retired from the Oldsmobile Motor Works in 1904 and soon set up a rival company called REO (his initials). Trucks bearing this name were produced for decades. General Motors bought the Olds Motor Works in 1908. 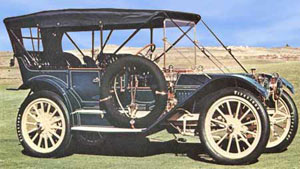 Ransom Eli Olds died in 1950. He lived to see the age of flight, antibiotics, two world wars and the success of the car he created. He didn't live to see the end of production of the cars that bore his name, and that's a good thing.

Much of the information for this story came from "Setting the Pace", a recent book by Helen Jones Earley and James R. Walkinshaw, covering the history of Oldsmobile cars. It's a good read.