Virgil Exner was an extraordinarily talented automotive designer. Exner was born in 1909 and he became the youngest design head ever of the Pontiac Studio in 1934. "Ex" (as he was known to his friends and associates) worked at the Studebaker Studios under Raymond Loewy from 1938 through 1949. Ambitious and aggressive, Exner started designing cars in his spare time and presented them to Studebaker on his own, which setup direct competition with his boss, Loewy. Exner's design for the 1947 Studebaker won-out over Loewy's design and this spelled the end of his career at Studebaker, even though he was retained to do the reworks for the 1948 and 1949 models.

Exner came on board with Chrysler in 1949 and enjoyed a snowballing career success, becoming Chief of Styling by 1952. Ironically, this was the year the rug was pulled out from Chrysler as the corporation sank into a permanent 3rd place in the industry, behind Ford, while GM with its Chevrolet marque reigned as king. 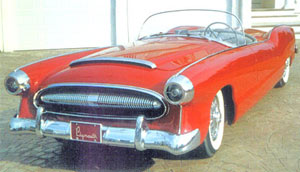 Originally in Azure Blue, the 1954 Plymouth Belmont concept car as it looks today in red trim.

Chrysler's Plymouth line had dropped to less than 12% of its normal market by 1954, which was far below its traditional third-place in sales for the corporation. Two Plymouth "dream cars" were designed and produced for the 1954 show season in an attempt to rekindle interest in the marque. The first was a flashy two-seat roadster called the Belmont and the second was a coup called the Explorer. In all probability, Chevrolet's new Corvette and Ford's impending Thunderbird two-seater had a heavy influence on the design and building of these two concept cars. I could go on at considerable length about the other show cars in Chrysler's 1954 and 1955 lineups, but that is beyond the focus of this article which is, indeed, the Belmont.

The Belmont made its public debut, painted a medium metallic Azure Blue, sitting atop a rotating platform at the Chicago Auto Show, surrounded by Plymouth's other 1954 offerings. The flashy new convertible undoubtedly turned quite a few heads while quickening pulses with a glimmer of hope that this was a vision of things to come for both Plymouth dealers and customers. 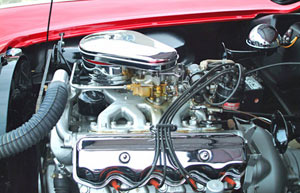 The concept car had been fabricated of reinforced fiberglass by Briggs Body — not Plymouth or the Chrysler Corporation (although Chrysler would eventually purchase Briggs). As remarkable as the exterior of the car was, even more remarkable was the fact that a Dodge Red Ram hemi V8 engine resided under the hood. This sparked speculation almost immediately that the Belmont was more Dodge than Plymouth, and corporate literature claiming the car was built on a Dodge frame just added fuel to the fire.

In truth, both the Plymouth and small Dodge shared the same 114" wheelbase chasses. It was also common knowledge that Plymouth was working on a V8 at the time but, due to lack of manufacturing capacity, engine production had to be delayed. Chrysler was building a new engine foundry and it was assumed that Plymouth would have its own V8 by the 1955 model year. The push was on because it was known that Chevrolet would be introducing its own V8 in 1955 as well. 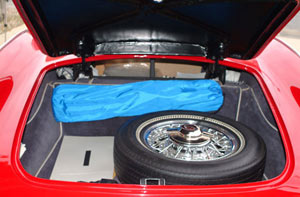 The roomy trunk has ample room for luggage as well as stowing the full-sized spare.

Plymouth did, in fact, introduce a V8 for its 1955 models, but dealers were told to push the straight-six because V8 production couldn't keep up with demand. The first V8s to be installed in Plymouths were actually Dodge engines (the first true Plymouth V8 didn't appear until the 1956 model year).

The Dodge engine in the Belmont is serial number P27-1014, which designates it as the 14th V8 engine produced for the 1955 models (the motors were built prior to the actual production of the 1955 cars).

The bore and stroke is 3-7/16"x31/4" and the displacement is 241.3 cubic inches, producing 150hp at 4,400rpm. The engine is totally stock except for chrome valve covers and a low-profile air cleaner fitted to the standard Stromberg WW-3-108 single-barrel carburetor. The valve covers were just eye-candy, whereas the custom air cleaner was necessary in order for the hood to close properly. 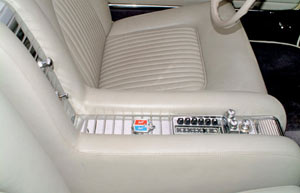 The light gray leather interior is plush and comfortable. The radio is nestled in the console between the roomy bucket seats.

Although the Belmont was unique, a number of components were "borrowed" from other Chrysler production parts bins. The sparkling chrome Kelsey-Hayes wire wheels were available as optional equipment on all Mopar products of that period, and the taillight assemblies are from the 1953 Chrysler line. The steering wheel and horn ring are stock Plymouth, while the control knobs were from the 1954 Chrysler.

The wrap-around windshield was fabricated from thick Plexiglas and, when seated behind the wheel, you can see some slight rippling in the plastic material. There are no exterior door handles, so entry and exit is accomplished by pulling on the chrome levers on the inside of the door panels. The Belmont's convertible top is stored in a separate compartment directly behind the seats, covered with a solid panel. 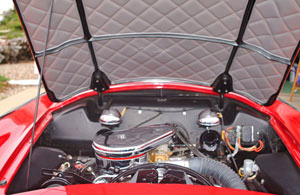 The underside of the Plymouth Belmont's hood is covered with quilted material that acts as a sound deadener. Twin chrome-capped horns are mounted on the firewall and the juice is provided by a 6-volt battery.

Exner had a special arrangement with the Chrysler Corporation in that the Belmont would become his personal property after it was retired from the auto show circuit; this was indeed out of the ordinary, since retired concept and "dream" cars were routinely destroyed once their useful life was over. 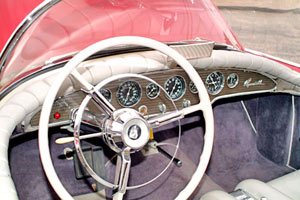 The Belmont's dash pad is covered in light gray tuck-and-roll leather — a padded dash was really innovative in 1954, but it was probably done for esthetics rather than safety concerns. The dash is also engine-turned and sports easy-to-read gauges, including a 130 mph speedometer.

Exner and his family retained ownership of the Belmont for several years and then sold the car to a Marie DeAngelo around 1968. Don Heckler purchased the car from DeAngelo in 1970 and owned it until January, 1989. Originally a resident of Ventura, California, Heckler moved to Oregon where he purchased a farm. The Belmont was "discovered" there by noted classic car enthusiast Loren Tyron. The Belmont had seen better days due to neglect but, nevertheless, it was still all there. Tyron secured the car for Don Williams as an addition to Williams' Blackhawk Collection. 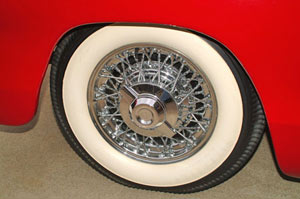 Chrome Kelsey-Hayes wire wheels with spinner hub caps grace the Belmont at all 4 corners and the spare. These were optional equipment on all Mopar products of the period.

A total restoration was performed on the car to bring it back to its original show car condition, with the only major change being a switch from the original Azure Blue color to red.

Along the way, the car was featured in the 1954 motion picture, Bundle of Joy, in which it was driven by Eddie Fisher with Debbie Reynolds as the passenger. Later in its life it also appeared in the 1957 movie, Mister Corey, which starred Tony Curtis, Martha Hyer and Charles Bickford. 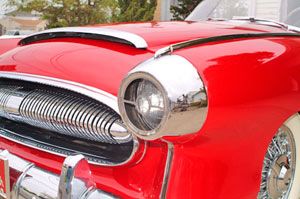 The headlights are recessed into chrome "buckets" with cross-hair grills keeping with the "jet age" styling trends of the period.

Ele Chesney, the Belmont's current owner, acquired the car in 2001 at Amelia Island. The Belmont is alive and well, residing in New Jersey, and Chesney enjoys campaigning the car frequently at high profile shows around the country, but she also takes the car to local shows at the New Jersey shore. "It's a lot of fun to drive," she commented. And anyone who has seen her behind the wheel knows she's having a good time with her full-sized "toy". But there's some good news for the rest of us — she also mentioned that we'll all soon be able to own a Belmont "toy" in 1/24th scale when the die-cast model becomes available soon.