The Dawn Of Supercars 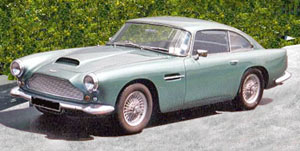 It was 1948 when David Brown bought Aston Martin and named John Wyer to the position of Technical Director. Both men were innovative and not afraid to take risks. Both of them, above all, were sports car enthusiasts. Through the 1950s their efforts were concentrated upon the design and production of a true high-speed, high performance sports/touring car. The current Aston Martin models were continued while prototypes of an entirely new car were developed. High quality and the use of the best materials would remain the hallmark of the company.

The Aston Martin DB4 ("DB" standing for David Brown, of course) made its debut in October of 1958 and made instant news in the motoring press with its ability to accelerate from 0-100 and back to 0 in less than 30 seconds. No production automobile, including the 300SL Gullwing, could approach that level of performance back in '58 and it would be four more years before the legendary AC Cobra would set new 0-100-0 records. At 3,976 Pounds (nearly $12,000 ) the car was anything but cheap. The typical sports car cost less than a third of that back then and even the big Jaguars were thousands less.

What Made It So Great?

First of all, Aston Martin had always concentrated on racing and then worked that technology into its street cars. The DB4's body consisted of a steel chassis platform on which a small-diameter steel tubing frame was attached. This type of construction guaranteed stiffness and that, in turn, meant good handling. More precisely, this type of construction assured predictable handling. That is, before the car would begin to plow to the side in a hard curve, it would begin a transition toward oversteer. The overall effect would be a sense that it would go where you wanted it to go.

The DB4 had 4-wheel disc brakes — a rarity in those days, with only the Jag XK 150 so equipped — and top-speed capabilities beyond 130 mph, with 0-60 times of less than 10 seconds. In spite of its performance, the DB4 was designed to be docile in traffic. Interior appointments were plush, with leather everywhere.

Now, For The Engine 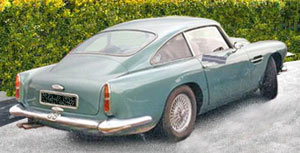 Anyone who looks at an Aston Martin engine will tend to assume it's a Jaguar XK unit. It isn't.
The DB4 straight six of 3.67 liters was designed by Tadek Marek and was based directly on his racing engines. The bore/stroke ratio was "square," the combustion chambers hemispherical and the entire engine was aluminum (as opposed to the Jaguar's iron block). It was the twin overhead camshafts — and their polished aluminum covers — which made the engine look so much like the XK Jaguar engines.

Power for the DB4 came to 240 bhp, well within the design capabilities of the engine. Standard engines breathed through twin SU side draft carburetors but many owners opted for special "Vantage" engines which had triple SU's and two sparkplugs per cylinder.

It was a very good engine, as Aston Martin's late-50s racing record attests. The racing versions won just about every victory attainable in the sports car field, including the 1959 Le Mans. These wins are even more impressive when you consider that the DB4's rear axle was a standard, "live" DeDion type and not anything sophisticated.

The Aston Martin is a British car. Therefore, one shouldn't be surprised to find that they were prone to clutch slip, cooling system faults, high oil consumption and brakes that pull sporadically to either side in the rain. They can get very hot in the cockpit when driven any distance in warm weather.

On the other hand, it's hard to look at one and not think of James Bond, although we always think of Peter Sellers (he used one in the movie The Wrong Arm of the Law and the running gag was him 'flying' the DB4 over various road dips).

Overall, the DB4 — or any other Aston Martins of the 60s — is a classy, beautiful car. The fit and finish was far better than typical British cars and the performance was extraordinary. Ownership was, and still is, expensive.

Neat cars, though, very neat, as their prices seem to reflect. "Basket-case" 1962 DB4 convertibles go for the mid $20,000's, which is a pretty stiff price for a full restoration project. On the other end of the spectrum, fully restored convertibles sell for $125,000 and coupes for about half that amount.