As early as 1941, Nash was experimenting with unit bodies. Engineer Ted Ulrich believed in the design and pioneered it in the '41 Series 600 Nash because unit bodies offer the advantages of lightness and greater stiffness when compared to body-on-frame designs. The only disadvantage is the relative expense of periodic facelifts, and this proved to be one of the mistakes made by Nash during an era when yearly redesigns were the norm.

George Romney joined Nash-Kelvinator as a vice-president in 1948. After learning the details of the auto (and refrigerator) business, Romney occupied himself with the twofold effort of studying the potential benefits of mergers with Hudson while trying to predict which car designs would sell. Both efforts would ultimately end up as "finger-in-the-dike" solutions for much larger problems, but at the time all decisions seemed proper and logical.

Romney loved the styling exercises involved with the auto business and was committed to Nash's philosophy of making cars that were widely divergent from those of the Big Three. To that end, the 1950 Nash line would appeal to the practical-minded, value-oriented customer.

Who Would Have Thought? 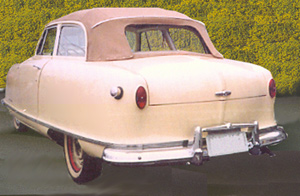 The Rambler was a risk for Nash, since it was a little car with a [short for the time]100-inch wheelbase. Other automakers had dabbled with small cars, but none had made a commitment to them. Nash president George Mason was convinced that someday the American public would be cost-conscious, saying "Won't there come a day when people will be concerned with the cost of doing things?" in October of 1950. Little did he know that it would be 40 years before that happened...

Mason's (and Romney's) choice for the Rambler would prove to be the best one they ever made. The little car would keep American Motors alive well into the 1960's, long after the Nash and Hudson vanished. The reasons were many, but significant among them was the Rambler's capacity for seating five adults (snugly, that is). Also, the enibody construction was free of the rattles and squeaks typical;on the Big Three cars.

Then there was the Convertible Landau. Billed as the "Smartest, safest convertible in the world", the Rambler's convertible form featured the only such car where the horizontal roof section folded back, leaving "the safety of husky steel rails overhead" — according to the sales literature. Brochure photos and advertisements showed four or five smiling folks happily driving the Landau (it's interesting that in all these photos the men are wearing sport coats and ties and the women wear dresses and scarves over their heads).

The Ramblers sold reasonably well in their first year, at a very fair price of $1993. They were new, daring and small, over 15-inches shorter than a Chevrolet. The dashboard was Spartan, even for 1950, with a single round instrument pod that contained only the essential gauges. A radio and "Weather Eye Conditioned Air System" were standard in the cars as well.

Most odd was the Rambler's gearshift. Instead of the typical column-mount, the shifter was mounted on a ball-socket which protruded from an elongated section of the dash. Fast shifts were not easily accomplished with this setup. On the other hand, the Rambler's engine (borrowed from the '49 Nash 600) was a 172 cubic-inch six hat put out close to 100 horsepower, giving the light car sprightly performance (well, maybe 'perky' would be a better word).

The Rambler Convertible Landaus sold to a small but avid group of customers throughout the 1954 model year, after which they were dropped. They would probably not have been built for that long but for the fact that the immensely-popular Superman TV show. As many will remember, Lois Lane (Phillis Coates, later Noel Neil — or vice-versa) drove a Landau. She was seen in many episodes driving her little Rambler, the evil-doers hot on her trail. Millions of people saw that car and some, no doubt, just had to have one. No, the Superman show wasn't sponsored by Rambler, and the producers probably used one because it was handy.

No matter how you look at it, the Rambler Convertible Landau was an interesting, odd, cute little car that enjoyed modest success. Maybe it even predicted the modern sunroof, targa designs of cars that we take for granted today, maybe not. One thing it did have, though, was Lois.