Jeremy Vreeman, president of Motorworks Restorations, Inc., has been working on air-cooled Volkswagens since his early teens. While he was still in high school, his dad nicknamed him "Mr. VW." Today, his shop in Colorado Springs is filled with 14-17 Volkswagens on a typical day. Of those, six to nine will be in for complete restorations; the rest will be undergoing a variety of different improvements, from what Vreeman calls an APR (affordable partial restoration) to a complete custom transformation or a performance-racing build.

While still a student, Vreeman formed Mr. VW's Auto Services in Illinois. He later changed the name to Mr. VW Enterprises, Inc. After repairing or restoring many Midwestern cars, in 2003 Vreeman moved from the Chicagoland area to Colorado Springs, Colo. There, he formed Motorworks Restorations. Vreeman regularly presents seminars about Volkswagen restoration at the Mid America Motorworks' Volkswagen Funfest event in Effingham, Ill. 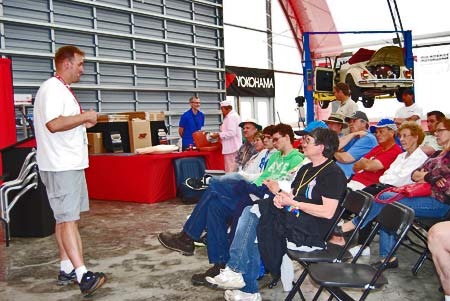 Vreeman tells seminar goers that he gets many questions about whether an investment of $20,000-$40,000 in a Volkswagen restoration will result in having a car that will sell for that much or more. He said that the simple answer is "no." He told his audience that a lady who owned a restored 1971 Super Beetle convertible he redid would have been "$25,000-$30,00 ahead if she started with a different car," because the '71 Super Beetle convertible is a fairly common model. That didn't consider the woman's emotional attachment to her car.

"She told us the story about how she bought the car brand new and how it went with her all through college," said Vreeman. "In fact, if you see the car with the top up you'll see her original college window sticker from the University of Colorado on the window because she told us that sticker had to stay." According to the restorer, people will spend copious amounts of money when a car gets under their skin and they develop an irrational desire to see it look new again. 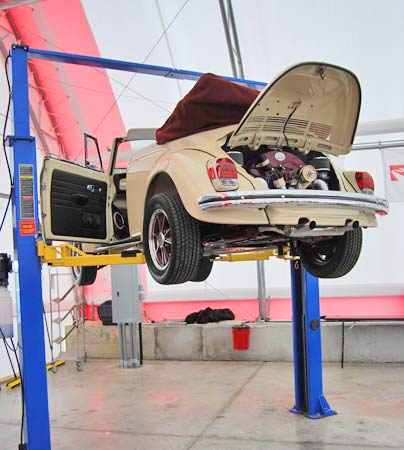 The owner of this '71 VW Super Beetle used it as her college car. She had it restored by Motorworks with original looks, but with a number of modern upgrades. 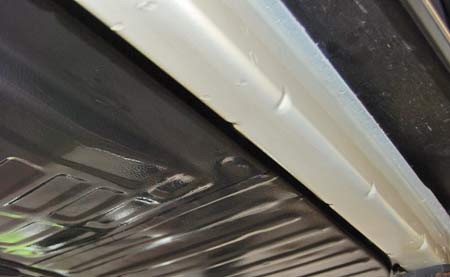 Nearly every panel on the Super Beetle had gotten rusty and was replaced with reproduced or fabricated panels of the highest quality. 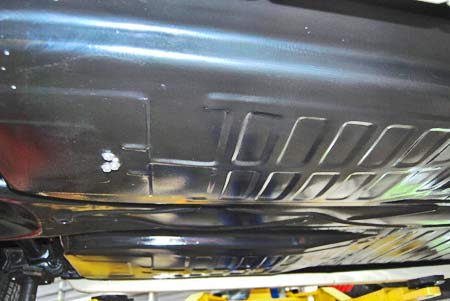 Almost every undercar part was powder coated Only 2-piece floor pans are reproduced, so they were butt welded, then factory seams were mimicked.

Vreeman stressed that enthusiasts should have a restoration goal in mind when they start a project. They should decide if they just want to drive an old Volkswagen again or if they want an all out show car. They should think about whether the goal is to have a family heirloom, a racing car, a customized car, an upgraded interior treatment, a new paint job or an ear splitting stereo system. He pointed out that a complete restoration involves taking a car totally apart and rebuilding it by hand so that it literally becomes new again. The end result of a full restoration is "a brand new, hand crafted car" according to Vreeman.

Motorworks Restorations offers 100 percent complete body off restorations: stock or custom body and paint work, renewal of all rubber and glass and individual restoration on parts. The APR is another featured service. The shop also promotes interior restorations and service and repairs. Its Website includes a downloadable Restoration Checklist that can be filled out and sent in for a preliminary estimate on whatever work a customer is interested in.

Vreeman explained that full restorations start with disassembly, followed by a means of getting all rust out of the body. In some cases the shop will mount the stripped body in a rotisserie. Next, a tow truck will come to lift up the body and rotisserie and take both to be media blasted. "That way the blaster can turn the body around and upside down to get rust out of all nooks and crannies," Vreeman said. "In other cases, the body is stripped by dipping it in chemicals." Cars or Volkswagen buses being dip-stripped need to be shipped back and forth to Chicago, where the nearest chemical stripping facility to Colorado is located. 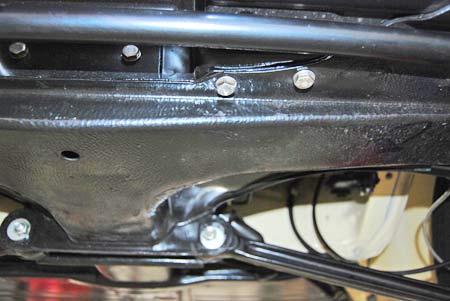 Super Beetle owner was not concerned about re-using original hardware so stainless steel fasteners that look good and never rust were used. 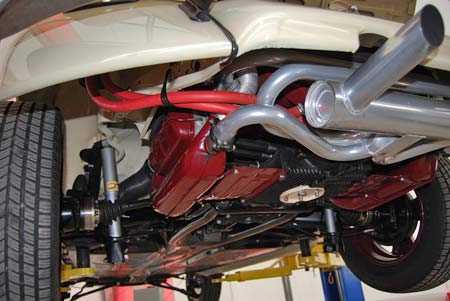 During the restoration the owner decided to have the engine finished in colors that went well with the exterior finish and undercar colors.

When it is cleaned up, the car body goes to the metal and fabrication work phase where the rusty or damaged sheet metal is replaced. Plasma cutters are utilized to cut out bad metal. If available, the highest quality replacement body panels on the market are installed. Motorworks Restorations avoids making factory style lap welds, which promote the formation of moisture and rust. Butt welds are used, but then later factory seams are mimicked to give the structure of the car an original appearance. At this phase, any custom fabrication—such as a roll bar or roll cage for customers interested in racing the cars—is added.

Phase two of the restoration process is bodywork and paint. Vreeman said that this involves another stage of metalworking in which the goal is straightening things out and finishing work. This is where the seam sealer is brushed on over the welds. After all the finish work, the filler is added and the car is completely sanded. Then, it gets an initial coat of primer. Then, the whole car gets block sanded, before getting miscellaneous spot repair work. Then, it is primed again prior to a complete wet sanding. Epoxy is used on many parts that will be hidden. This provides a nice, somewhat flexible protective inner coat. Then, a sealer is applied. It's the sealer that activates and makes the color coats stick to all the primer. The outside and inside of the car are painted at the same time.

"Stages one and two are by far the most expensive phases of any restoration, unless you're talking about a custom job," Vreeman told the seminar goers. "On a typical restoration, body and paint can be pretty expensive, so we tell people if they're not emotionally attached to the vehicle, they should go out and find another one that's the nicest and best car they can afford."

Motorworks current shop has about 8,000 sq. ft. of space, half of which is set aside for metal fabrication and bodywork. The other half is used partly for assembly and partly for engine building. This is where the body and chassis go back together. "The engine is always last, because, relatively speaking, it's the easiest part of the restoration," said Vreeman. "In addition, there are so many engines and options to think about; often when we do a car, the job will change in that the customer may add this or that and want a bigger engine to handle it."

The assembly area is where the car is actually built. All the parts for the chassis are assembled to it first. Then, the engine is installed. Next, comes the body. Finally, details like upholstery or a top are added. Vreeman uses 4 x 8 ft. trailers that he buys at Harbor Freight to move Beetles or Karmann-Ghia bodies around in the shop. "We have six of them that we can wheel around the shop," he says. "It's easy to modify them and use them as assembly dollies." 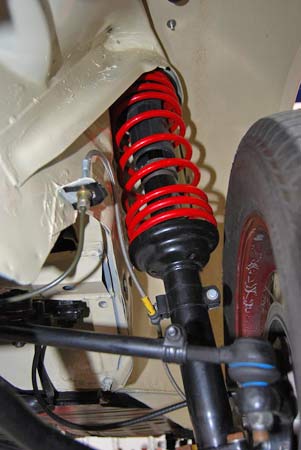 Motorworks installs struts after the body is mounted. This ensures that the suspension will be sprung and in proper position when fasteners are snugged up. 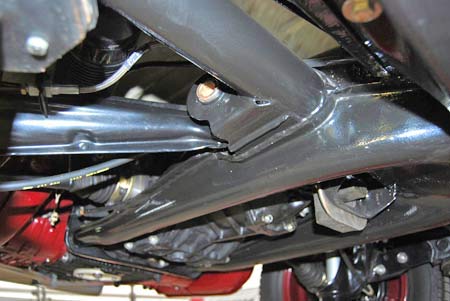 Some original parts that are not re-popped were powder coated and reused. Subtle modifications included heavy sway bars for better handling.

Typically a Beetle getting a complete restoration at Motorworks is assembled two or three different times to make sure that all the panels line up and to test fit the associated parts. This results in a car with a beautiful body and a beautiful chassis and frame that fit together just right. In some cases, assembly is done with the original hardware, but only after it is sent to a company in Denver to clean and give it a black anodized or zinc phosphate coating. Other cars are done with new stainless steel hardware that looks good and won't rust.

Vreeman is an air-cooled Volkswagen expert and a long-time enthusiast and knows many little details about the cars. He pointed out that air conditioning was always dealer installed and that Beetles have 17-ft. of electrical wiring. He noted that the automaker originally used German square-weave carpeting, except in super-late-model cars. "We have even been asked to restore small parts like an ash tray or a factory jack that will never again be used for jacking the car up," said Vreeman. "One owner had a Karmann-Ghia key chain to go with his car; we restored it to match the vehicle. That's really emotional attachment."