Tying Things Together With Tie-down Straps

Tie-down straps are sold everywhere these days. You see them at Wal-Mart and at every classic car swap meet. They come in all colors and sizes in a wide variety of strength ratings. We like to have as many types as possible—thin, wide, short, long, ratchet and plain—to use inside our restoration shop. 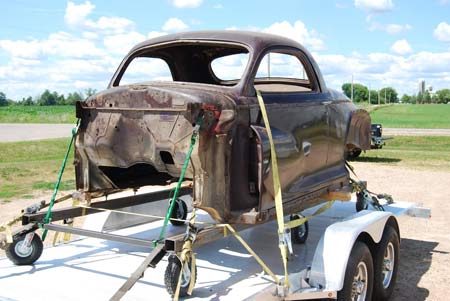 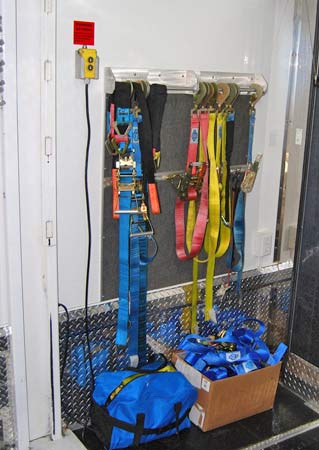 Tie-down straps can actually come in handy for many things. It pays to have a wide variety of different straps stored in your shop or, in this case, in your car hauling trailer. 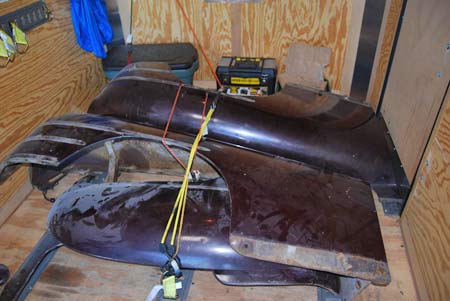 We had E-track installed to the floor of the Gunner's Great Garage trailer. Now we use short tie-down straps that clip into the E-track and have a loop on the other end to secure parts to the trailer floor with bungee cords.

Inside the shop? You bet! While many people think of tie-down straps only as a means of cinching a car to a trailer, we have found many other uses for them. And we're guessing there's probably dozens of uses we haven't thought of. Anytime you want to hold something stationary or put gentle pressure on a part to force it into place, the right tie-down strap may be the tool that will do the job.

We discovered one of the many uses for tie-down straps in the shop when we were redoing the front suspension of our 1952 MG TD roadster. A well-known book on MG T Series restoration suggested a way to compress or decompress coil springs between the upper and lower A-arms by using a chain wrapped around a floor jack and around the front suspension assembly.

As we read about this technique we realized we did not have a chain long enough to do the job, but then we thought about using a strong tie-down strap in place of the chain to help disassemble the front end parts. With the jack raised against the frame, we carefully slid the strap under the floor jack and around the suspension parts, making sure it hooked on something for a secure connection. Then, we used the ratchet mechanism to tighten the strap around the A -arms.

Next we loosened the links between the upper and lower A-frames with the jack holding tension on the strap. Because the strap goes under the jack and over the front A-arms, the jack is working against itself and the frame doesn't lift. The coil spring is sandwiched between the strapped A frames. Then, as you very slowly lower the jack, the compressed coil spring slowly decompresses, releasing its energy gradually. When the energy is gone the spring can be safely removed. 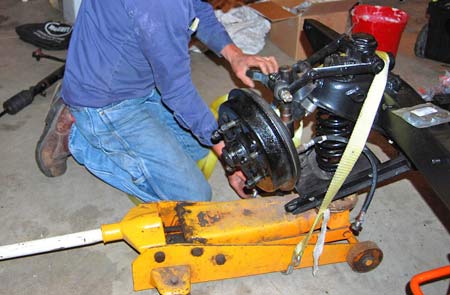 Vince Sauberlich prepares to use a thick, strong tie-down strap and a floor jack to help take apart an MG TD front end assembly without sending the coil spring bouncing around the shop. 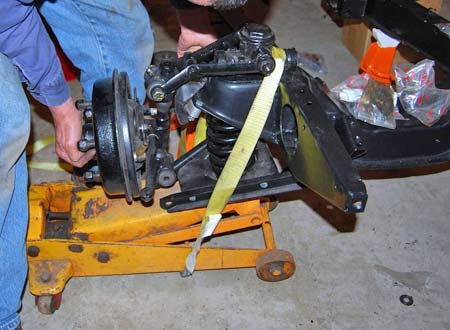 Positioning the strap carefully around the upper and lower A-arms is important for a safe job of disassembling the front suspension. The heavier tie-down straps can be used in place of chains and won't scrape paint off.

Naturally, this job calls for one of the wider and stronger tie-down straps, but it goes very smoothly. In fact, when properly used, the webbed strap will be much better than a chain because it's gentler on any paint or other finish used on restored frames. You do have to be careful where you position the hooks on the ends of the straps and the ratcheting mechanism to avoid having them cause paint damage. Following the steps in reverse, tie-down straps can be used to compress the coil spring between the A-frames during re-assembly.

After we tried this front end assembly process several times, we started to rely more on tie-down straps to help us with other shop procedures. In a second case, we were working on the bare frame of a 1968 Triumph TR250 and had to re-install the steering rack on a frame cross member. This is done with two special U-shaped clamps and the clamps have to be forced over tick rubber mounts. Triumph enthusiasts we spoke to said this was difficult to do neatly.

The Triumph frame was supported with stand jacks at each corner and was sitting on our Backyard Buddy 4-post lift. The front end of the frame was above the front crosspiece of the lift. This time we used a thin and light, but long, tie-down strap. We looped it around the front crosspiece of the lift and up over the car frame making sure it ran directly over the U-shaped clamp. With the rubber mount around the steering rack and positioned under the U-shaped clamp, we started tightening the ratchet on the tie-down strap. 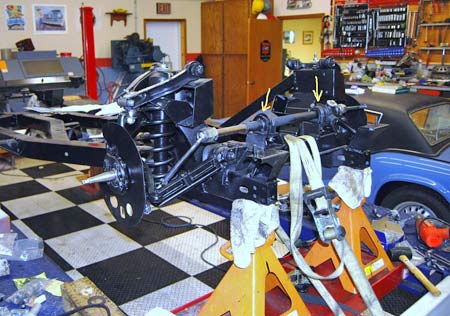 We used a heavy yellow strap to attach this Triumph TR250 frame to our Backyard Buddy 4-post lift. Later we used a thinner tie-down strap to pull the U-shaped clamps (yellow arrows) down over the rubber steering rack mounts.

This time, the strap tried to slide off to one side since the U-shaped clamp slants to that side. However, a little hand pressure was all we needed to keep the tie-down strap over the top of the clamp. As we tightened the ratchet, the strap slowly and firmly pulled the U-shaped clamp into position over the rubber steering rack mount. We then repeated this on the other side and all was good.

We have had good luck using heavy tie-down straps to help lift engines. They are somewhat easier to wrap around an engine than a chain is and as we already mentioned, the straps are easier on finishes, including high-temperature engine paints. We have used tie-down straps around some heavy power plants including a massive Chrysler straight eight and a heavy Studebaker Big Six. Naturally, the hooks and ratchet have to be properly positioned so they don't exert force on parts that are easy to bend or break. This is not difficult to do. 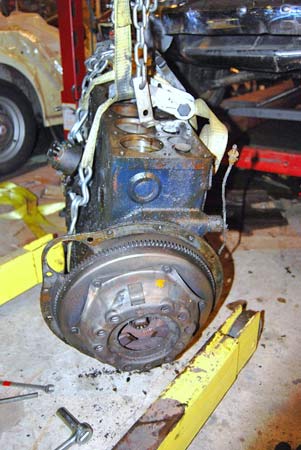 Studebaker Big Six was extracted from a 1949 Commander Starlight Coupe using a combination of heavy tie-down straps and chains. One strap was cinched around the engine block; the other was used for lifting the engine. 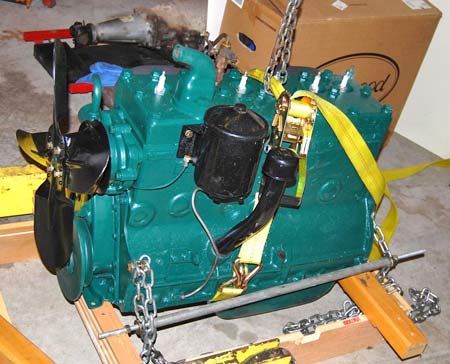 Here is the same Studebaker Bog Six after it was rebuilt. At this stage we used a chain for lifting (a strap would have worked just as well), but we again cinched a strap around the block so we could lift it without paint damage.

Ken Quade of Appleton, Wis., is an expert on rebuilding British car transmissions. Ken not only installs new parts-he also makes his own shims and spacers and sometimes literally re-engineers the gearbox to eliminate shortcomings in "factory" designs. In addition to rebuilding the transmissions, Quade designed a machine to test rebuilt transmissions before they go into a car. When he kooks the transmission to his test machine, he uses tie-down straps to secure the gearbox to his worktable. Tie-down straps also work well to secure a chassis or a car to a 4-post lift or a motorcycle frame to a cycle lift. 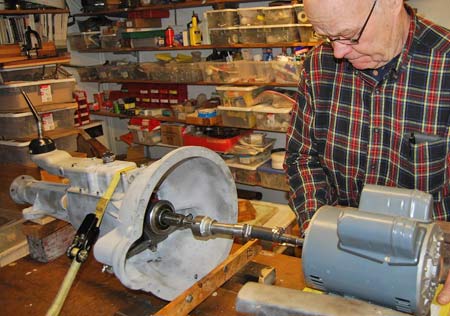 Ken Quade uses this machine of his own invention to test the British car transmissions he rebuilds in Appleton, Wis. Ken uses a yellow tie-down strap to fasten the rebuilt gearbox to his testing apparatus.

Long, wide tie-down straps also came in handy as a sling to use when we lifted the body tub off of our MG TD frame. We carefully wrapped the straps around and under the cowl section of the body and around the body just behind the door, carefully running a strap from one rear wheel arch to the other. We hooked all the straps together above the center of the body tub and lifted the body off the chassis with an inexpensive chain hoist that we purchased at Harbor Freight. The MG TD body tub is relatively light. The tie-down straps were bundled in the center and lifting the body off the frame went perfectly. 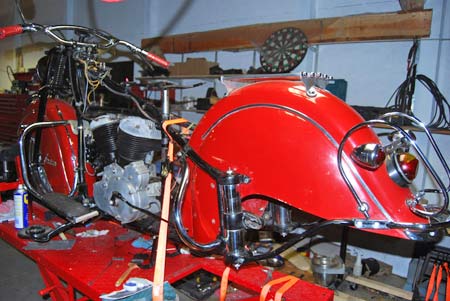 Hobbyist Curt Muller of Kalamazoo, Mich., used a orange tie-down strap to fasten his Indian Chief motorcycle to a cycle lift in his shop. Without being strapped down tightly, the bike could tip over. 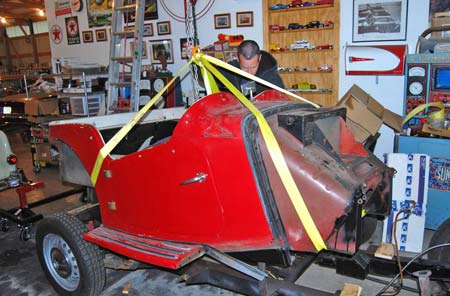 We even used some long, heavy, yellow tie-down straps as a body removal too to lift the body tub off our MG TD. In this application, it was fairly important to get the lifting knot very close to the exact center of the body tub.

Since we remove lots of engines at our shop, we always come up with creative ways to nail some boards together to make engine stands. The engines don't always sit perfectly in these homemade engine holders and tend to tip one way or another. Cinching the engine to the stand with a tie-down strap often solves the problem. The straps hold the engine tight and keep it from tipping. 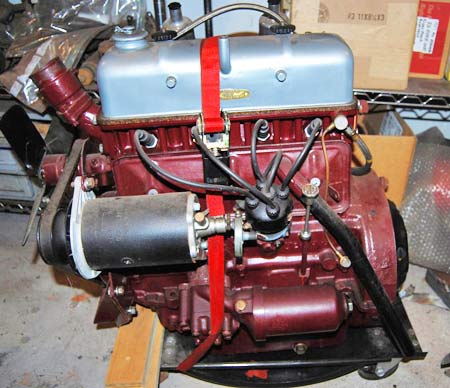 We use many improvised or homemade stands and carts to hold engines being rebuilt in our shop. Straps come in handy for securing them. This MG TD engine is strapped to a wheel dolly.