Restoration of a Smith's Heater

Smith's heaters are commonly found on British cars and come in different models. The one that we restored is from a 1960 Daimler SP250. Fortunately, although this is a rare car, the heater is not a rarity. The same one is used in the MGA. That means you can purchase most of the restoration parts you will need.

Some parts that you can't buy new are the heater box, the heater box cover, the heater core and the hot air outlet vent. On most old cars, these will be in fairly decent shape and require only striping and refinishing. If they are damaged or rusted through, you'll need to do body work type repairs or locate used ones.

Our heater box reminded us somewhat of the hollow body of a banjo or guitar, although it isn't entirely hollow. Sheet metal "walls" inside are shaped to hold the heater core in a diagonal position and to create a rounded air duct with the "squirrel cage" type blower motor fan installed near its center. The blower motor is held to the back of the box, behind the blower motor fan, with three screws. Its shaft spins the fan inside the heater box.

The heater box cover has a lip or flanged end that presses over the heater box. There are indentation in both the heater box and cover that fastened five (on this model) cover clips in place. The approximately four-inch-long clips hold the two parts firmly together. At one end the heater box cover has a large circular opening through which the "squirrel cage" blower motor fan pulls in air. This should be covered with a piece of screening that is held in place by a circular coller fastened with three hex head screws. At the bottom of the opposite side of the box, just above the hot air outlet vent, are two short tubular air hose connectors made out of thin sheet metal. These are held in place with three small screws.

Other Smith's heaters we have seen are shaped somewhat like a beehive or car air cleaner. These have essentially all of the same elements, but the parts are different in size and shape. The restoration process is basically the same though. It boils down to disassembly, clean up, repair or replacement of the bad parts and careful reassembly with fixed-up or new parts. Since the car needed a total restoration and the owner wanted to keep his overall costs as low as possible, he was open to restoring the heater to a "nice" appearance without replacing every part with new or sending parts out for painting or powder coating. In other words, blood, sweat and tears, limited parts replacement and a few cans of spray paint.

Disassembly of the heater started with removal of the spring clips, which pop off with a screwdriver like clips on a distributor (except, in this case both ends of the clips come off). Only the shape of the sheet metal holds the heater core in place. Everything else was taken apart by removing the screws described above. A special "collet" type fastener is used at the end of the blower motor shaft to hold the "squirrel cage" in place so that it won't come loose as it spins. The old gaskets used to seal some parts against the heater box had to be peeled off with a scraper. 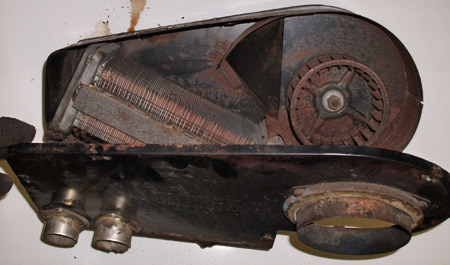 After five cover clips are removed, the cover comes off to reveal the angled heater core and round "squirrel cage" blower fan. 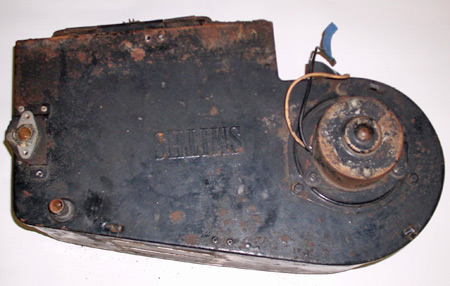 Looking at upside down heater box (note "Smith's" name is flipped) you can see motor on right and heater control valve and pipe fitting on left. 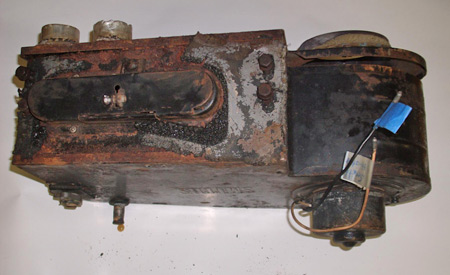 This is bottom of heater box with air outlet vent on left and air hose connectors on back. Louver vent is hidden by flip-up door with cable connector. 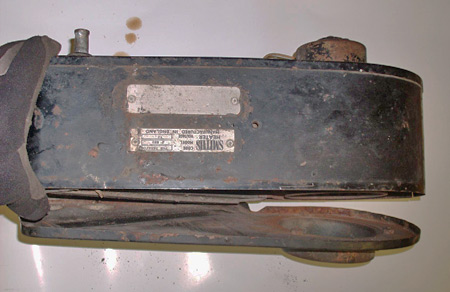 This is the top of the heater box. Rivets holding nomenclature plates on will be drilled out with Dremel tool bit and new plates will be riveted back in place.

Thanks to the big 60-in. Eastwood media blasting cabinet we purchased last year, removing the old finish from the heater parts was simple. Since media blasting doesn't remove rust, we treated the areas with minor rust with a store bought spay-on rust converter product. We had some trouble with the tiny fasteners holding sheet metal parts on. A few of them were rusted in place and broke off. We had to drill out the holes with our Dremel tool and find replacement fasteners. 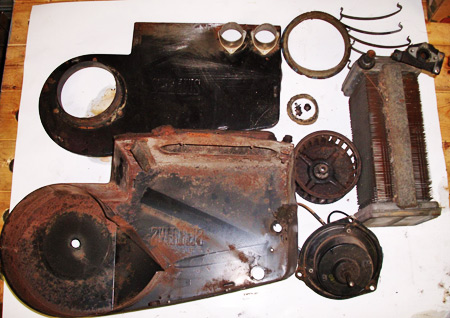 All the parts before a trip to the media blasting cabinet and treatment with a spray-on rust converter. 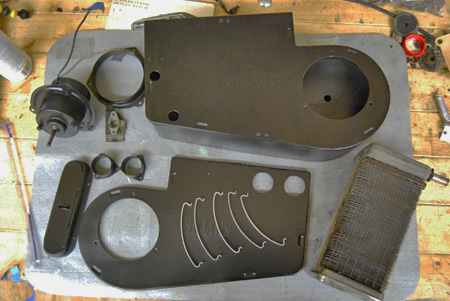 Here's all the heater parts after blasting, rust treatment and refinishing with multiple layers of spray paint with wet sanding between coats.

We were glad to find that our factory blower motor worked fine when tested. A replacement motor can be purchased through mail order suppliers of British car parts, but usually the word "replacement" means it's not exactly the same as the original. So, for a restoration project, it's always nice to find the factory motor working just perfectly. However, if this is not the case, it can usually be repaired. 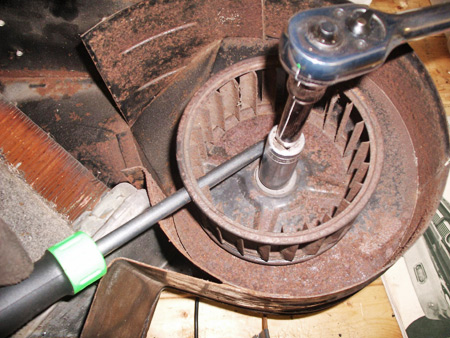 To remove special collet fastener from end of blower motor shaft the squirrel cage had to be held in place with screwdriver.

To repair the motor it is mounted in my lathe so the commutator can be cleaned up to a smooth surface. Most of the time a tool bit will not even be required, as usually a medium crocus cloth held against the spinning commutator will do the trick. The motor's carbon brushes may need replacing. To do this you have to remove the motor from its housing. Bad brushes will show wear, discoloration and chipping. Any shop that repairs electric motors should have brushes that are close enough in size to be used with minor alteration.

Once you polish the commutator and replace the brushes, the field winding wires need to be re-soldered. Then connect the motor leads to a 12-volt battery to test operation of the blower motor. If it spins, then use a meter to check if the current is strong. You should get a reading of about two amps. 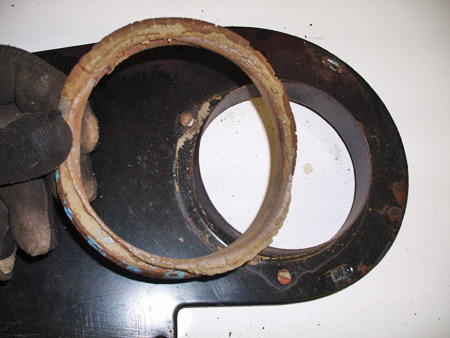 All gaskets were in bad shape, but reproductions are readily available.

The parts of this heater were basically in good condition. The flange on the heater box cover had a few kinks and bends that were easy to straighten using a vise or light tapping with a small hammer. The air hose connectors — made of very thin sheetmetal — were all out of shape, but they straightened up nicely when we tapped a large, tight-fitting socket down into then and tapped around the outside with our small hammer. The heater core looked very good, but we used some special tools that Eastwood sells for restoring radiator fins to straighten a few of the tiny heater core fins that were mushed. The hinges on the flip-up door of the hot air outlet vent need to be freed up with Liquid Wrench and then lubed up.

As far as refinishing the parts of the heater, most of the parts and fasteners were originally painted black. We used satin black Rustoleum spray paint, but we applied multuiple coats and did a lot of wet sanding with 600-800-grit paper between coats. We cleaned the clips with a wire wheel on our grinder and painted them with some really cool "chrome" paint that Eastwood sells. That made them look very nice, although you can have them cad plated or buy brand new ones. We painted the insides of the heater box and cover, too. We did not paint most fasteners black, even if they were originally black. They look nice with a bright finish to we wire brushed them until they looked bright and spray clearcoated them.

We originally painted the "squirrel cage" black, then noticed a restored Jaguar at a show had a Smith's heater with two blower fans painted white. Sure enough, after asking around, we were told this part was done in white and we corrected our mistake. Our heater was also missing the screening, so we went to the local hardware store, got some that looked like the Jaguar's and cut it into a circle so the circular collar cut hold it in place. We painted it white, too. 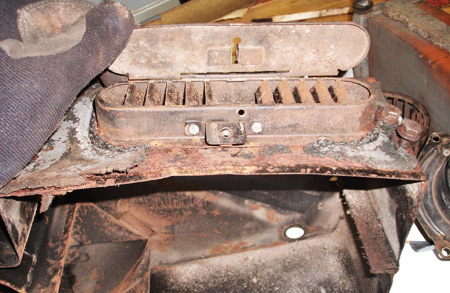 No wonder the hinges on the flip-up door covering the hot air outlet vent were sticky. Penetrating oil, wire brushing and lubrication fixed the problem. 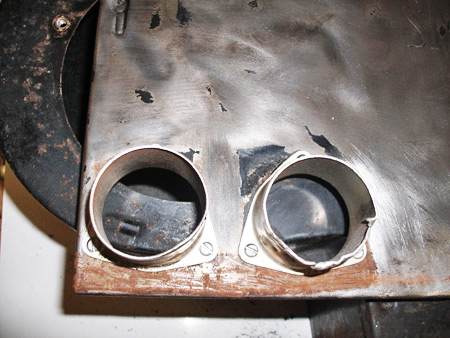 We fixed up the air hose connector on right by driving a tight-fitting socket into it with a hammer. Then it looked more like the one on the left.

A couple of new parts were required including rubber grommets for around the pipe connector and gaskets for the heater control valve and air outlet vent. The rubber grommets always look too big for the holes they have to go into, but with a little twisting using needle nose pliers and tiny screwdrivers, they finally sandwich themselves around the holes in the tin. Our parts order came to about $30.

The parts order included reproductions of the "Caution" and "Smith's" nomemclature plates used on all Smith's heaters. These have been copied because the writing on the originals is almost always worn away. There is nothing like a brand new nomenclature plate to make something look "restored." The blanks for the code, model and voltage need to be re-stamped with the numbers from the original plates. Rivets hold the nomenclature plates on the heater box. 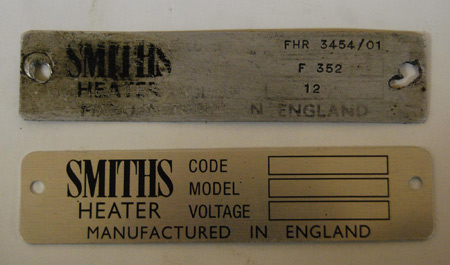 Reproduction "Smith's" plate on bottom came from Scarborough Fair and will still need to be stamped with numbers from the original.

We purchased our parts from Ceceilia Bruce at Scarborough Faire. Moss Motors, Victoria's British, Abingdon Spares and other mail order houses sell them, too. However, anytime we can get what we need from Scarborough, we go there because Ceceilia can answer any questions we have. When she made up a "kit" of engine parts for our MG Magnette, we did not have anything leftover and we only had to order one additional item. In contrast, when we did our TD motor, we wound up with things we didn't need and it was like an order a week for awhile to get left out parts we did need. Unfortunately, Ceceilia only sells MGA stuff, although some of it does crossover to other British cars like the Daimler. 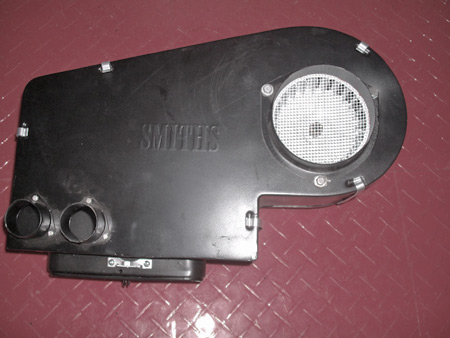 The Smith's heater after a "cost effective" restoration.

At the end of the Daimler project, when we put the heater back in the car, we may need to order air hoses, ducts, pipes, control cables and a heater control panel. While these are available for other British models, they may not be direct crossover parts to the Daimler. Luickily, parts used on British models tend to be of fairly standard issue and we shouldn't have much trouble finding what we need.