Listen. Those sounds you hear are habits breaking. Old ties snapping. Records falling. They're the happy sounds of the Dodge Rebellion. People demanding more "hot" in their hot cars, more "big" in their big cars, more "new" in their new cars. Swingers switching to Dodge. Is Dodge '66 fresh enough for you? Are you young enough for Dodge '66? Come along. Dodge has big plans for you! 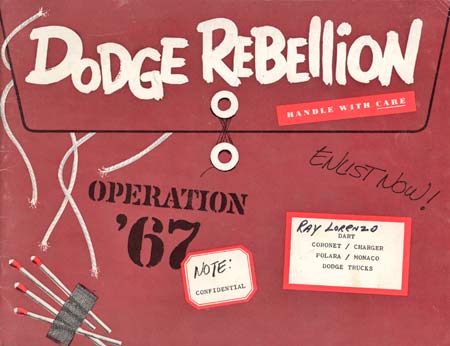 In an attempt to stamp out cramped compacts, break the sedan-buying habit and eliminate Dullsville, Dodge announced the great Dodge Rebellion in an advertising campaign that would last from 1966 - 1967.

The face of the Dodge Rebellion was Pamela "Dodge Girl" Austin. She appeared in television commercials, print ads and, of course, Dodge sales literature. The message was simple — change the status quo and drive something cool. Sales literature pictured Austin posing with bombs, guns, cannons and so much sex appeal that any potential buyer would have to rush out to buy a new Dodge.

Dodge sales literature for 1966 and 1967 is quite typical of the era — dominating colors were your standard-issue late 60's/early 70s mustards, browns and dark reds. In addition to full-line catalogs there were, of course, catalogs dedicated to specific models. In these we can see many examples of Pamela Austin posing with various weapons but her favorite armament was the musket. While all of the other model catalogs relied heavily on the Rebellion images it is interesting to flip through the Charger catalogs and see very sparse usage of the theme. Of all the vehicles in the Dodge lineup, wouldn't the Charger best exemplify the "break the sedan-buying" and "eliminate Dullsville" mentality? 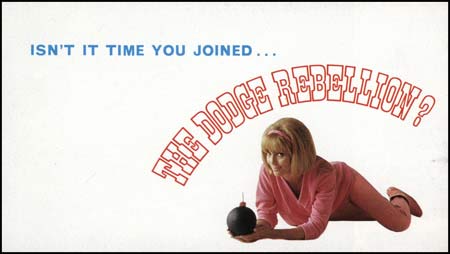 The best artwork of the Rebellion campaign can be found on the advance catalog issued to dealers and salesmen — the public never even saw it. The cover of the advance catalog simulates a binder with matches taped to it and fuses coming out of the entry flap. Salesmen were encouraged to "Enlist Now" and to note that the contents found within were strictly confidential. Inside, the tone is much less rebellious and highlights safety features, detailed specifications and selling points for the 1967 lineup.

When considering the riots, demonstrations, political climate and social unrest of the late 1960s it is not hard to wonder if there was any backlash for using bombs and guns in a national advertising campaign. In 1966 this thought was already on the minds of the ad agency that created the campaign Batten, Barton, Durstine & Osborn. As soon as the '67 models were introduced in 1966, extensive research was conducted to "determine possible adverse association with unsettled social conditions of our time." By early 1967 BBDO found that consumers associated the Rebellion campaign with one thing — Dodge cars. In 1966, The Scholastic Research Center reported that when they asked students (ages 15-18) "which car advertising appeals most to you this year?" Dodge was the winner and by late 1967, 87% of all consumers could correctly identify the Rebellion campaign with Dodge. 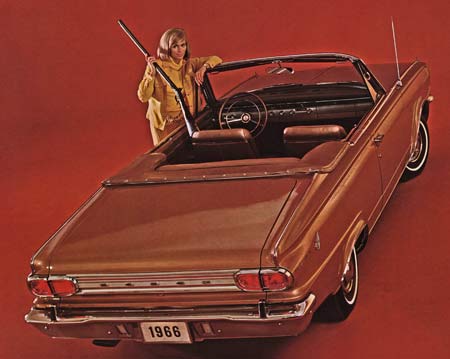 Despite the Rebellion campaign and the introduction of the new Charger, Dodge sales only increased 5% in 1966. 1967 actually saw a 9.5% decrease in overall sales. Although consumers could readily identify the Rebellion campaign with Dodge, when it came to purchasing a new car the public still clearly preferred Chevrolet and Ford who outsold Dodge nearly 4 to 1.

Company executives believed that by late 1967 Pamela Austin the sex symbol was overshadowing the cars, their new features and her role as Dodge Girl so "Dodge Fever" would rule advertising in 1968 and Austin would be replaced by Joan Anita Parker.

The award-winning Dodge Rebellion campaign only lasted two years but commercials can still be viewed on the internet and Rebellion sales literature and ads can be found at swap meets throughout the country.