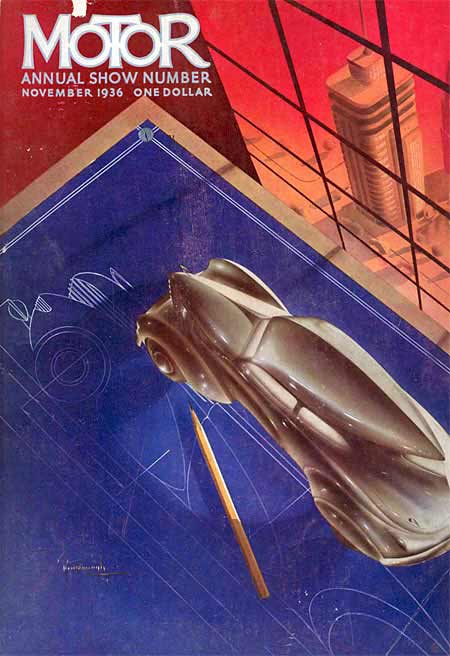 1936. Again there is a slim silver border around the image. A brownish-gray car model with a front-to-back peaked roof ending in a sharp, v-shaped rear window appears beside a yellow pencil atop a designer's blueprint sketch of the car. Other car features include a deep grill on the sides of the hood, grill covers over the headlights, two sloped rear trunk compartments with side handles, and unicameral wheel covers front and back. The drawing of the car, against the deep blue of the blueprint is edged with tan and contrasts markedly with the black bars of floor-to-ceiling window that looks out onto an art deco-inspired city scape tinted in reddish shades. 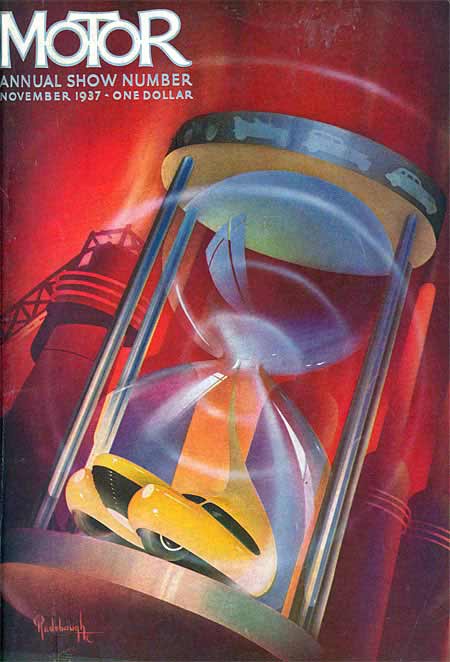 1937. This cover features a large hour glass against a reddish-brown background, and the slim silver border surrounds it. The background is an industrial scene with large banded columns on the right side and a larger column topped by a searchlight and enclosed by a metal cage with a metal gantry leading off one side. The hourglass is held together by four metal posts and cars in profile encircle its metal top. Sands passing through the middle portion of the glass recombine in the lower chamber to create a golden car of the future. 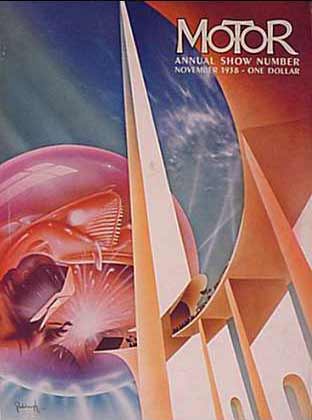 1938. The cover, no longer set off by a silver border, depicts the Trylon (triangular-shaped pylon) and Perisphere (18-story sphere) that were symbols of the New York World's Fair of 1939. The fair's theme was "The World of tomorrow". Against a bluish-green background a purplish-red sphere encloses a car floating above a man in a welding mask holding a welding gun giving off hot sparks. On the right of the picture white columns trimmed in peach and copper tones, with lower rounded arches, support a throughway sloping from the sky, through the Trylon, and towards the welding. Along the surface of the roadway are people holding banners and several sleek vehicles, one a tram or train, all headed into the future.