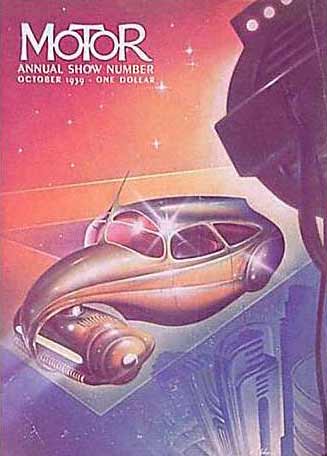 1939. A blue background at the bottom changes into a burgundy background at the top. At bottom right several deco-style high rises, one of them reminiscent of the Guggenheim Museum, appear. Above them a huge theatrical light arises sending its beams onto the centrally-placed, sleek car of the future that rests on a glass platform and floats in space. The front hood rests on a central pivot and tapers into a thin band of metal that encloses a roller-like compartment, looking something like a rounded head of a vacuum cleaner. A center divider splits the front windshield and continues on, rising above the car as an antenna. 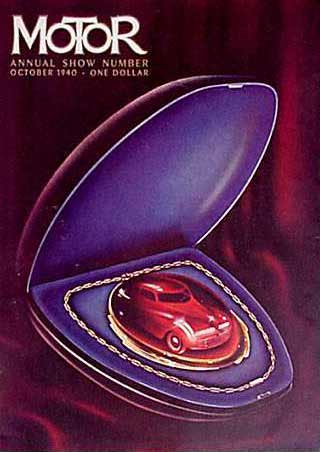 1940. The thin silver border has returned and against a burgundy background an open jewel case with violet lining reveals a modernistic red car pendant encircled by silver chain. 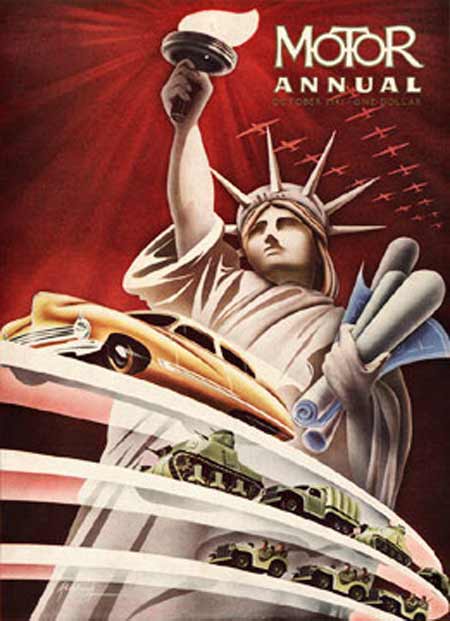 1941. A plane squadron emerges from the top right hand corner of the burgundy background, trimmed in silver. The Statue of Liberty is the central character in the drawing, her right arm holding a torch and her left clutching blueprints, presumably drawings of vehicle designs. Three bands of roadways appear in front of her, the topmost band holding a golden-colored passenger car, the middle band has military tanks and trucks, and the lowest band with military jeeps. 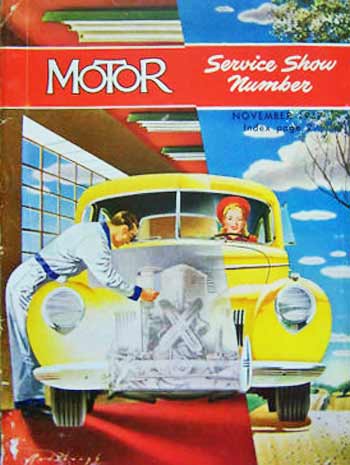 1947. While this cover at first appears realistic with a front-on view of a yellow car being driven by a red-hatted, young blonde woman who drives over a hilly road on a sunny day, a slanted line divides that image. The bulk of the drawing depicts the same car from the mechanic's viewpoint — red floor and ceiling, large mullioned window, and a mechanic in light blue uniform leaning over a "dissolved" portion of the hood to work on a black and white-sketched engine. [Note: This and other post-War designs utilize more color and appear less daring and more cartoonish than pre-War, deco-influenced designs.] 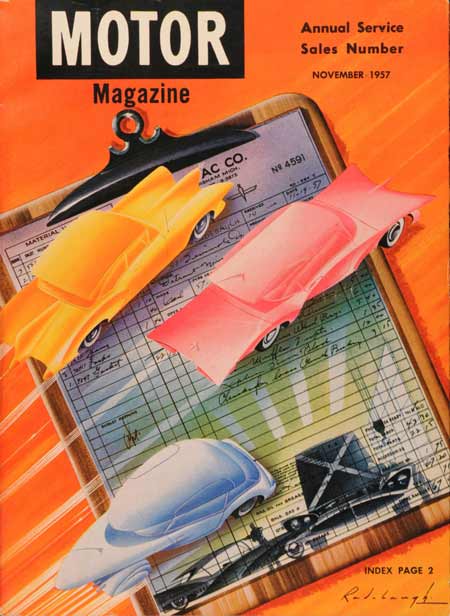 1957. Speeding over a large wooden clipboard with an invoice for garage work are three candy-colored futuristic cars--an orange finned one, a stretched pink one, and a tear-shaped, three-wheeled blue one.