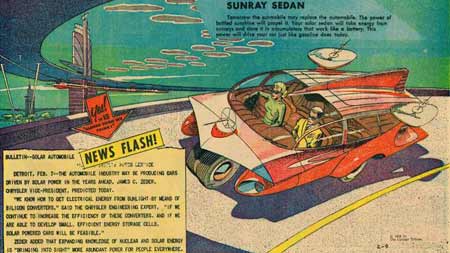 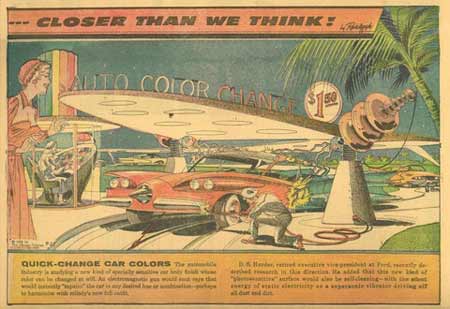 Quick-Change Car Colors. A photo-sensitive, self-cleaning car body finish allows for car color to be changed at will via an electromagnetic gun that emits rays to "repaint" the car. (Sept. 21, 1958)

Monoline Express. Your car would be guided along an elevated track. (May 21, 1961)

Magic Beam Highway. Electronic controls pilot the car; there's no need of a driver. Guidance strips in the road send impulses to the car and regulate direction, speed, braking, and obstacle detection. (Oct. 15, 1961)

Radebaugh continued touring in his mobile art studio and producing creative automotive illustration into the sixties. In 1963, for example, he produced drawings for the Mercury catalogue — but not just any drawings. In what may have been a first, he used car paints to illustrate the cars, an early instance of self-referential art. In 1964, his ad for RCA extolled transistors and semiconductor rectifiers that would run the "electronic" cars of the future. The driver faced a cockpit with joystick and illuminated instruments. Sensors in the illuminated road guided the car, set its direction and speed, and moved it past imposing, illuminated skyscrapers. 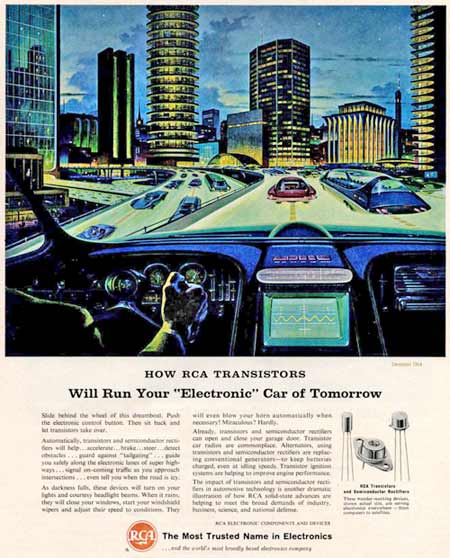 1964 RCA ad promoting electronics for use in cars of the future.

Still, work for illustrators was slowing down, supplanted by the new wonders of photography. Families were snapping shots with Kodak Instamatics and flash cubes but those weren't the only advances. Commercial photography had better definition and more vibrant color than ever before. Television was ubiquitous, and more and more companies put their advertising dollars to work in that medium.

By 1967, Radebaugh had moved to Grand Rapids, Michigan. It seemed his up-and-down luck had hit a rough patch. He was in poor health. There were claims that an agent cheated him out of some money while poor investments robbed him of the rest. He sold his vacation home, his cars, and most anything else he could find — and settled in Grand Rapids, hoping to find a way back to the big time.

While waiting for good fortune to return to him, Radebaugh collected a small military pension and made a living painting signs and decorating furniture. He worked at Kozak Studios, Milling Road Furniture, and GR Chair, all affiliated with Baker Furniture. A young artist who worked with Radebaugh at that time recalled that some of his decorated furniture was not in keeping with expectations. While working on oriental designs, for instance, it wasn't uncommon for him to make slender, graceful Asian ladies a little too buxom, or to add a female nude among the pagodas and dragons. Customers — and managers — were not amused by such antics.

In 1971, Radebaugh was contemplating a comeback with another futuristic comic strip, "Plowshares and Pruning Hooks" to highlight new manufacturing ideas. Isaiah 2:4, taken as the unofficial credo of the United Nations, talks about an end to war, with nations repurposing their swords into plowshares and their spears into pruning hooks. The strip, however, never made it into syndication.

Radebaugh never regained his health. In January 1974, he entered the Veterans Administration Hospital in Grand Rapids for treatment of heart disease but did not survive.

At his death he was penniless, estranged from family, and little-known. It would be good to think, though, that he retained something of his earlier imagination, humor, and zest for life. Because the eccentric artist wearing a monocle, smock, or beret, dangling a cigarette in one hand, is no more, we must depend upon the work he left behind to reflect a time when an immensely talented artist who loved cars helped us imagine the future to which they might transport us.

The Art of MoToR Magazine