1937 found Radebacher with his own studio at the Crescent Engraving Company of Kalamazoo, where he inked illustrations for several magazines. By 1938, he had attracted the notice of several ad agencies as well. He utilized airbrushing techniques in his magazine drawings and in ones he did in 1938 and years following for Dodge on their Luxury Liner. His Luxury Liner brochure featured airbrushed, sepia-toned cars against a green sky — and he made it clear that this was THE car of the future. 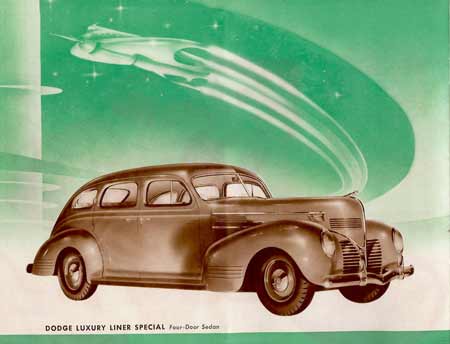 In 1940, he hit the big time with his illustrations when he drew the cover for the March issue of The Saturday Evening Post, a challenging assignment but one he gladly accepted over the next few years.

In 1942, he put his work as commercial artist aside and joined the U.S. Army. The Department of Defense recognized his talents (and, perhaps, his eccentric inclinations) and assigned him to the Design and Visualization Branch of the Pentagon's Research and Development Department where he worked on designs for armored cars, bazookas and artillery. He also came up with a way to illuminate the instrument panels of military vehicles with black light, a technique that helped conceal vehicles from the enemy. When Radebaugh returned to civilian life at the end of 1945, he retained his fascination with fluorescent paints and black light.

Despite his attention to America's military effort, it seems Radebaugh also continued his commercial art during the War years. From 1942 to 1947 he designed a dynamic, futuristic, full-color ad campaign for Bohn Aluminum and Brass Co. known as "Imaging the Future". Bohn produced aluminum, magnesium, and brass alloys and set about leading consumers into a future world where the reduced weight of these alloys led to lower-cost and futuristically-designed industrial products. The notion was that technology would lead us into the future, a place with ample leisure time. Among the products Radebaugh conceived for the long-lasting ad campaign were planes, ships, tractors, cars, milk carrier, tugboat, lawnmower, motorcycle, earth-moving machine, drawbridge, merry-go-round, modern engine, even see-through refrigerators.

[If you're interested in further exploring the Bohn Aluminum and Brass Company ads by Arthur Radebaugh, you can go to the following websites:

Since Art Greenwald, an intense artist turned businessman who was also good friends with Radebaugh, had opened his New Center Studios in 1943, Radebaugh may have had his separate studio there during the War years. It is certain that he worked there following the war. New Center Studios, at its peak, had four Detroit locations, kept about a hundred and fifty artists working full-time, and worked primarily for the auto industry. Typically, an ad agency would make a pitch to automakers, and, once they'd landed the account, would job out illustrations to a studio with a team of artists. New Center Studios handled ad campaigns for the Big Three and other car manufacturers, ensuring that Radebaugh always knew "what was in the wind", whether or not he worked on a particular campaign.

Work After the War

The war was over, and Detroit's automotive industry decided to celebrate its Golden Jubilee in high style, with a 12-day event in June, 1946. The celebration marked Detroit's 150th year and the American car's 50th anniversary. Radebaugh was commissioned to produce the symbol for the celebration, one featured on all Jubilee-related materials — from letterheads to ties and dresses. It also was built as a 65-foot sculpture. The emblem Radebaugh produced showed the past, present, and future of the car — a golden 1896 Ford in the foreground, a medium-sized contemporary blue car in the center, and behind it a simple, large-spoked wheel set at an angle with the pink and yellow rings of an atomic nucleus overlapping it. A night scene of downtown Detroit served as background. As the automotive industry, which had propelled America's war victory, entered the atomic age, it was hoping to use its industrial know-how to fuel long-lasting peace. A press release of the day explained that the Queen of the Golden Jubilee would be the first woman to use atomic power for peacetime purposes when she illuminated and set in motion Radebaugh's emblem by waving a "wand of neutron-splitting beryllium over a tube of boron, smashing a boron atom." As she waved her wand, energy was transmitted to the symbol, illuminating "its spiralling neon conception of an atom in fission, its antique car and its modern car." 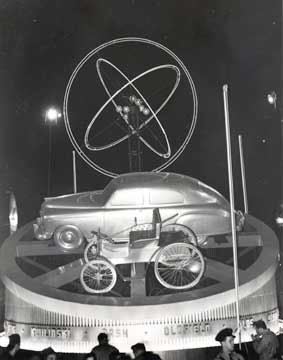