Physical Vapor Deposition (PVD) is a relatively new process that is being used to coat many solid objects. PVD does a good job of creating a chrome-like coating on automobile wheels and other trim pieces.

Dick Niborski of Winona PVD Coatings—a company based in Warsaw, Ind.—gave a seminar about PVD coatings at The Shop Show in Indianapolis. Winona PVD Coatings built a factory to do PVD work for automakers like Ford. It has done tens of thousands of wheels for Ford Mustangs and F-150 trucks. Niborski sells PVD coatings for wheels in the automotive aftermarket.

According to Niborski, PVD is basically a "powder coating" process, except that the coating is aluminum, rather than powder. Wheels coated using the PVD process look even shinier than chrome wheels. And after testing, manufacturers have determined that they can warrantee a PVD coated wheel up to five times longer than they will warrantee conventional chrome plated wheels. 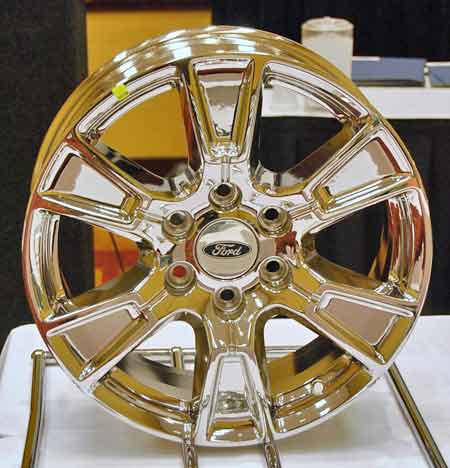 Automotive wheels coated using the PVD process wind up with a finish that looks shinier than chrome and resists deterioration much better.

The basic PVD coating process deposits layers of a material on a solid surface one atom or one molecule at a time. The applications take place at pressures well below atmospheric pressure. The deposited layers can range from a thickness of one atom up to millimeters, The different layers form chemically free-standing molecular structures. Aluminum is the material that Winona PVD Coatings uses to coat the automotive wheels. 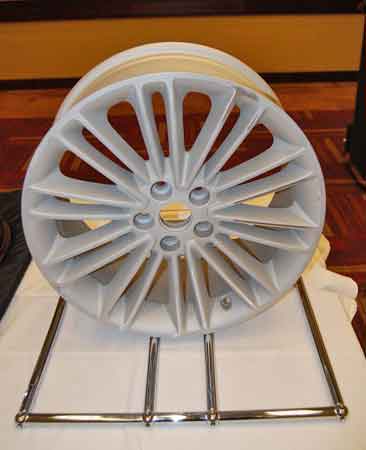 Before it is coated the wheel is media blasted and cleaned to remove the original finish.

When the vapor source is a liquid—or a solid such as the aluminum used in coating wheels, the process is called physical vapor deposition (PVD). Sometimes a combination of PVD and somewhat similar CVD (chemical vapor deposition) processes is done in the same or connected vacuum chambers.

Here's an example of the aluminum material that is placed in the vacuum chamber where aluminum substrates are deposited on the solid metal wheel.

Putting the parts that are going to be coated in a vacuum environment cuts down the density of the particles and lengthens what is called the "mean free path" for collision of the particles against the solif surface being coated. The application of vacuum also reduces the particle density of contaminants such as undesirable atoms and molecules. It provides a low pressure plasma environment and a means of controlling gas and vapor composition. Applying vacuum also enhances mass flow control in the processing chamber. There is also a reactive deposition process whereby the material being deposited on the solid surface reacts with either gases or co-depositing materials. A plasma helps activate gasses and decompose chemical vapor precursors. The plasma may be used to provide ions for vaporization by sputtering or bombarding a substrate for sputter cleaning and for bombarding the depositing material to make a denser chemical structure and control properties.

Winona Powder Coating, which was established in 1974, currently serves customers in the automotive industry, as well as in the foundry, agriculture, military equipment, RV, cargo trailer, marine, construction, electrical and plumbing industries. It also does work for the U.S. Government. Winona also operates a 167,000 sq. ft. facility in Etna Green, Ind. and a 50,000 sq. ft. facility in Elkhart, Ind. Both facilities are outfitted with the latest in industrial automation.

The company has a state of the art powder coating line with a five stage washer, automatic and manual coating booths and a digital controlled oven. In total, Winona Powder Coating has four coating lines and can coat parts up to 42 inches high by 76 inches wide by 264 inches in height. Winona is capable of coating materials, such as, epoxy, polyester, hybrids, vinyl, nylon and plastisol. 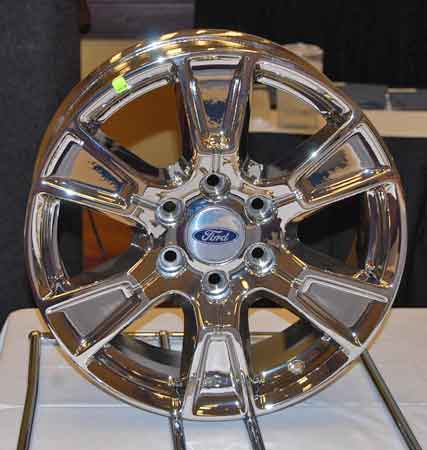 Dick Niborski's job is selling PVD coated wheels to car dealers, shops and individuals who have a set of wheels they would like to get repaired or enhanced. (As mentioned above, wheels that are coated with aluminum using the PVD process look shinier than chrome wheels and the PVD coatings hold up better than chrome). Niborski's major market is the car dealer who wants a car that looks better and won't come back for "make goods." He can also work with enthusiasts who want a single set of wheels redone and coated with PVD.

Bill Ciuplinski, the manager of a Green Bay, Wis., shop called Toys For Trucks credits PVD coated wheels for a big share of his store's tremendous growth. Toys For Trucks has grown for five years straight based largely on offering new products and services. "That's the key to it," Ciuplinski suggests. "If an accessories retailer like us gets stuck in a certain rut and doesn't try new stuff, then they're going to be losing the boat because someone else will be doing it." 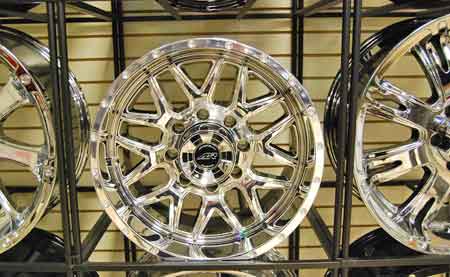 Toys Are Trucks includes a wide selection of PVD coated wheels in its massive inventory of truck accessories.

"We try to make things pop and shoot for a flashy and appealing look," said Ciuplinski. "The new PVD wheels are popular in Wisconsin because the chrome-look finish is applied electrically and does a much better job resisting road salt than chrome finish does. Our wheel business comes mainly from chrome rims, although the latest trends also favor black or green powder coats."

So as you can see, PVD coated wheels (whether chrome, black or green) have already caught on big time in the new-car industry and the truck aftermarket. They have been so well received in those niches that they are certain to start popping up on collector cars and performance cars. Since the wheels look a bit different than chrome, the PVD option may be less appealing to purists who are going "Pebble Beach" level authentic restorations, but for many enthusiasts building a car in the home garage, these wheels are a way to create a great looking vehicle that will retain that appearance for a longer period of time. And like any powder coating process, the PVD process is a bit less costly, too.