A Look at Pierce Bicycles & Motorcycles

When people think of luxury automobiles from the pre-war era it isn't long before the name Pierce-Arrow comes to mind. That company, based in Buffalo, NY, started producing automobiles in 1901 and within a short amount of time was manufacturing some of the largest and most beautiful cars the world would ever see. While their automobile manufacturing would propel the marque into the minds of car lovers forever, the company also produced marvelous bicycles and motorcycles. Let us now take a look at some of the sales literature that was used to sell these bicycles and motorcycles to the American Public.

The predecessor to the Pierce-Arrow Motor Car Company was the George N. Pierce Company. Started in 1872 after several successful years with partners, George N. Pierce earned his living by selling birdcages, refrigerators and other household goods. In 1890 Pierce attempted to capitalize on the bicycle craze sweeping the country. This newfangled gadget, seen as a fad to many, provided a more efficient way to get from place to place and provided a fantastic form of exercise.

The first Pierce bicycle appeared in 1890. By 1892 Pierce offered eight models of which four were tricycles. The lead unit was the men's bicycle (Model 30) that featured solid 30-inch wheels and solid tires. It sold for $85 and weighed 49 pounds. Optional "cushion tires" were available at an increased cost of $10. For "ladies and misses" an $85 bicycle with 28-inch wheels was available. The ladies model had no crossbar from the handlebar support to the seat stem allowing a graceful entry or exit from the bicycle.

By the latter part of the 1890s the bicycle was becoming fully developed and complete. A sales catalog for 1897 reported that the company had made "a substantial advance toward the perfecting of that twentieth century steed, the modern bicycle" by using the "best mechanical ideas of the times." Top of the line 1897 Special models cost $100 for both the men's Model 44 and women's "dainty" Model 50. Lower price Pierce models could be had for as little as $60. In 1897 seamless tubing joints were achieved by inside fittings "inside one tube and shaped to fit snugly around the opposite tube." This area was then brazed and painted. By 1897 pneumatic tires were commonplace and the weight of bicycles dropped to nearly 50% of the weight in 1892. The men's Model 44 weighed 23 pounds while the women's Model 50 weighed 24 pounds. 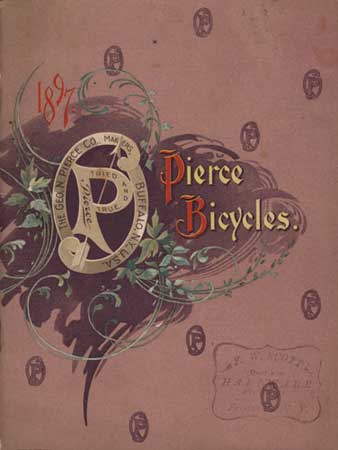 Just as Pierce-Arrow automobiles would offer innovation and advanced design in the decades to come, Pierce bicycles would also innovate and lead in the bicycle community. In 1898 they launched the Cushion Frame line. This line featured a shock absorber on the post connecting the rear axle to the seat pillar. This was a pneumatic device that would provide relief from bumpy roads. This Cushion Frame system would be a key selling point for Pierce Cycles in the years to follow and "A Study in Vibration" would be a recurring catalog topic. We've all seen pictures and old films showing just how bad roads were at the time so this Cushion Frame had to be of great comfort to contemporary riders. In addition to the rear shock device spring forks would become a feature of Pierce Cycles by 1903. It seemed as if Pierce was always working to perfect the ride.

In 1900 the Cushion Frame line was complimented with an innovative chainless drive system. In that year's red hardcover catalog the chainless system is described as a system that spins a geared driveshaft to transmit power from the pedals to the rear wheel. A bonus to the chainless system came in supposed decreased maintenance requirements. The catalog stated "Aside from oiling, care of tires and ordinary cleaning of outside parts, the machine requires no attention from the rider."

As the first decade of the 1900s continued, Pierce Cycles would consistently provide a wide range of models (some years more than two dozen!) ranging from traditional bicycles to speedy racers endorsed by Frank Kramer, who was national bicycle champion for 16 consecutive years.

Interestingly, it appears that there was an attempt to use bicycle sales literature to push the new Pierce Motorette automobile that went into production in 1901. In a 1903 bicycle catalog, the last full page advertises the Motorette. The ad states "Pierce Motorette models are designed to carry two passengers only, and represent the best French experience adapted to American conditions." Consumers are assured that the automobile will feature the same features as Pierce Cycles: solid construction, Pierce quality, simplicity of operation and a minimum expense to owners. I've found no examples of cycle advertising in early Pierce Motorette sales literature but both the cycles and automobiles regularly used the same company slogan; "Tried & True." 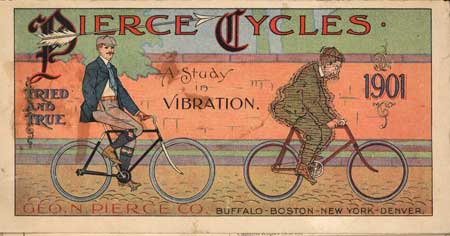 By 1906 the Pierce Cycle Company would separate from the Pierce-Arrow Motor Car Company and be led by George N. Pierce's son, Percy. The Cycle Company headquarters would remain at 22 Hanover Street in Buffalo, New York while automobile manufacturing would move to a new factory five miles north. Pierce bicycles (in some form) would continue through 1940 and would eventually include a juvenile line. Just as George N. Pierce got caught up in the bicycle craze in 1890, Percy Pierce would be lured into the motorcycle business by a similar motorcycle craze during the first fifteen years of 1900.

In keeping stride with Pierce bicycles, the company's motorcycles would be marketed to consumers interested in a high-end product that would deliver high quality and reliability. Their 1909 entry into the motorcycle market boasted two distinct features — the first American motorcycle to have a four-cylinder engine and gasoline and oil tanks integrated into the frame of the motorcycle.

The 1909 motorcycle was able to generate seven horsepower from the air-cooled four-cylinder engine. There was no battery on the motorcycle so ignition came from a magneto. This motorcycle shared two features with the bicycles: shaft drive and a pneumatic shock absorber. On the motorcycle, however, the shock absorption would be found on the front forks.

In 1910 the Cycle Company offered the public two options — the four-cylinder machine and a newly launched single-cylinder motorcycle. Inside that year's sales catalog for "Vibrationless Motorcycles" the reader is asked "who has not heard of Pierce bicycles and automobiles?" and quickly assured that "Mediocrity is a word which can never be applied to Pierce constructions." Praise for the four-cylinder engine would continue throughout the 1910 sales catalog and in one section it declared that "this [four-cylinder] motor is a replica in miniature of the engine used in the Pierce Great Arrow Automobile" — high praise indeed. 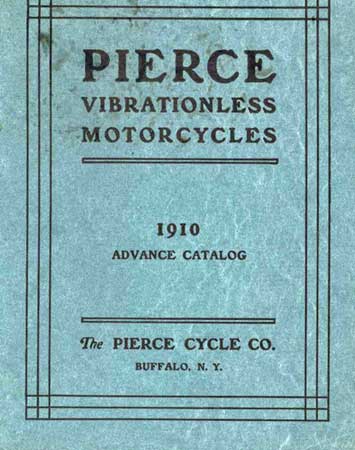 In 1910 both the four-cylinder and single-cylinder model used the same tank-integrated frame styles. There must have been some public uncertainty with this system because the prospect was repeatedly assured that the motorcycle frames "will not break or buckle." 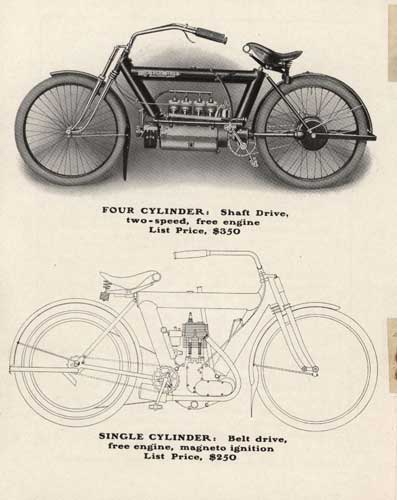 The 1910 Catalog depicts the four-cylinder model as well as the one-cylinder version.

In 1910 power to the rear wheels was belt-drive for the single cylinder model while the four-cylinder machine remained shaft-driven. The four-cylinder engine also featured a two-speed transmission and both models remained magneto ignition. Other standard equipment included Kokomo studded tires, Mesinger Cavalry Saddle, Rough Rider Grips, a tool roll and tools and a large size tire pump. As documented in the sales catalog black paint was standard and Pierce Red was the only color option. 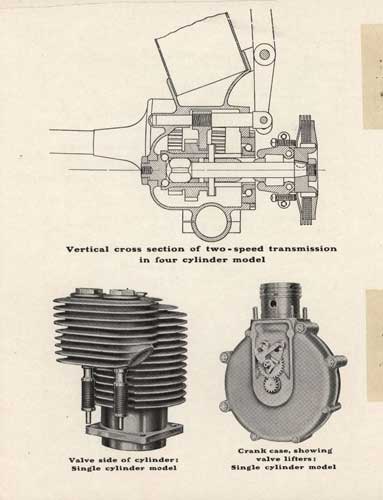 The Pierce Cycle Company would face some financial distractions from 1911 to 1913 but despite this 1911 and 1912 would be successful years for strengthening the reputation and performance of Pierce motorcycles. In addition to sales throughout the United States, the motorcycles were now being sold throughout the world. Reliability runs, hill climbs and other races were generating plenty of positive press for Pierce in magazines and newspapers. If you were in the market for a high-end motorcycle in 1912 you were certainly aware of the Pierce.

That high-end status apparently came with some selling burden as the 1912 Pierce Motorcycle sales catalog opens with a "Statement to the Public" defending its status as a high-end motorcycle manufacture by reminding the public of its original design, careful construction, reliability, and overall customer satisfaction. 1912 model offerings included three single-cylinder models ranging in price from $200 - $265 and two different four-cylinder models each costing $400. Optional equipment offered in 1912 included a tandem attachment, luggage carrier, speedometer and a lamp with Prest-O-Lite gas tank. Finally, the catalog included several customer testimonials and the results of several reliability runs from 1911.

1914 would be the last year of motorcycle sales for the Pierce Cycle Company. As a high-end motorcycle, Pierce had difficulty competing with the overwhelming quantity of competition in the market place. By 1914 the popularity of the automobile was increasing and the public could buy a Ford Model T for about $500. The ability to take multiple passengers, luggage and stay relatively comfortable in the process was too good to pass up as consumers were overwhelmingly choosing the automobile.

Going forward in 1915 the Pierce Cycle Company would continue to manufacture bicycles until 1918. In that year the company was acquired by the Emblem Manufacturing Company in Angola, NY who would continue to manufacture a Pierce bicycle line until 1940 — two years after its original parent organization, the Pierce-Arrow Motor Car Company, would fade from existence itself.

© 2022 Second Chance Garage, LLC. All Rights Reserved. Reproducing any material on this website without permission is prohibited.