Where Did Naugahyde Come From?

Well, actually it could be argued that it started in Newburg NY. The Fabrikoid Company was a small textile business in the Hudson Valley that had been working on creating artificial leather materials, particularly for use in the carriage and luggage trade and the growing automotive market. Leather, of course, was used throughout human history for clothing, shelter, tools and many other purposes including upholstery and footwear. People had tried to create synthetic versions of the versatile material but it wasn't until the Industrial Revolution that some promising developments came into being.

Fabrikoid chemists realized that a more robust, less expensive alternative for leather would open huge markets and in 1908 the company developed a synthetic leather that consisted of a nitrocellulose coating (called pyroxylin) on cotton that was strong and flexible and could be colored with pigments suspended in castor oil. The material could be pressed with various patterns that simulated leather grain. It worked pretty well, was non-cracking and highly resistant to water, wind and sun damage. Fabrikoid quickly found its way onto automobile tops and upholstery and luggage. Its success was noticed by the DuPont Company and in 1910 they purchased Fabrikoid for $1.2 million. Fabrikoid was the first non-explosive product made from nitrocellulose that DuPont produced and it led directly to the firm's organic chemistry product development.

DuPont continued to work on synthetic fabrics but directed attention to materials that included Nylon, Rayon and a host of others. Their last foray into artificial leather was Corfam, a material that was used in shoe manufacture in the 60s and was a marketing flop. The company made tremendous strides in the development of dyes and automotive paint products, however, letting other companies take up the challenge of creating an artificial leather material.

DuPont wasn't the only company working on synthetic leather. In 1936 chemists at the US Rubber Company's plant in Naugatuck, CT came up with a knit fabric backing coated with polyvinyl chloride (PVC) that was an excellent leather substitute. They named it Naugahyde, after the location at which it was developed. Naugahyde came into widespread use in the 50s and 60s and was seen everywhere in auto upholstery and household furniture.

The material was extremely tough, resistant to staining and sun damage and very stretchable, making it nearly ideal for automotive use. It became so well known that an advertising campaign from the late 60s featured a fictitious animal called the "Nauga," from which the skin was obtained. Unfortunately, the humorous campaign was taken seriously by some animal welfare groups and the company received hundreds of letters pleading with them not to slaughter innocent "naugas." 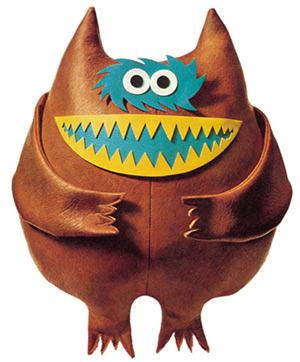 Naugahyde, now manufactured by the Uniroyal division of Michelin, still enjoys a huge market that is shared with its many imitators. The material isn't used to any great extent in automotive upholstery anymore, as manufacturers have largely turned to synthetic fabrics and real leather (a very lucrative optional extra).