A New Approach to an Old Trick: Metal Stitching

A few years ago at a trade show in Indianapolis David Silva of Lock-N-Stitch Inc. (www.locknstitch.com) showed me a Model A engine block that he had repaired using his company's "stitching pin" products. The old Ford power plant had developed a large crack in the deck surface. Silva drilled holes, inserted the stitching pins and then machined to top of the pins off. The result was a neat looking repair that made the old engine usable again.

Silva gave me the demo piece you see in the attached photos, the operation of which I'll explain below. I was fascinated by the demo piece and Silva said, "Why don't you take that home?" When I got back to Wisconsin, I went to a local business called Waupaca Metal Repair to show the device to the owner Rex Evchuk. In addition to doing big metal fabrication jobs for foundries and mining operations, Rex builds some pretty cool hot rods.

This demonstration device is called a Lock-N-Stitch Castmaster C3 Demonstration View Block. In addition to showing how a C-Series stitching pin works, it makes a great little conversation piece in the restoration shop.

I demonstrated how the locking pin worked and Rex said, "Oh, that's just metal stitching; you can do that with a plain bolt." He said that he had been stitching metal for years. He was right, too. A catalog that David Silva also gave me has material about the history of metal stitching. (Section of the Lock-N-Stitch catalog that tells the history of metal stitching. Professional machinists have been doing it for years, but stitching pins and other modern products make it easier and better than ever to do. Descriptions and drawings show differences between the "old way" and the "new way" that results in a better quality repair.)

The photos of the demonstration device that Silva gave me tell the story of metal stitching in a way we can all understand. The metal block has two sections with a hole drilled at the seam between the two haves. When you start screwing the stitching pin into the metal block, you can still pull the pieces apart. However, once the shoulder of the pin enters the hole. The pieces are locked together. No amount of pulling can make them separate. 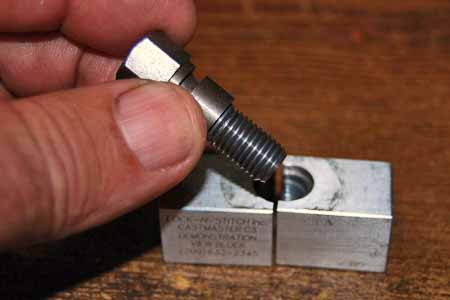 Here you see the stitching pin being inserted into the hole in the demonstration block. On an actual engine you would make a hole and threads or use an insert, and then tighten the stitching pin to draw the sides of the crack in. 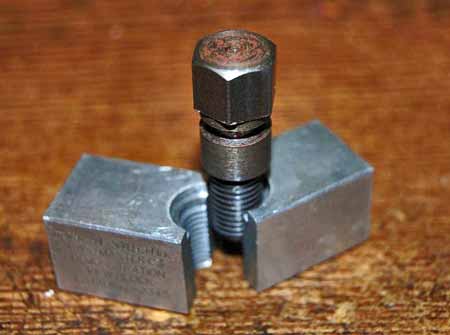 As you can see here, until the shoulder of the stitching pin enters the countersunk top end of the hole the two pieces of the demonstration block can be easily pulled apart. 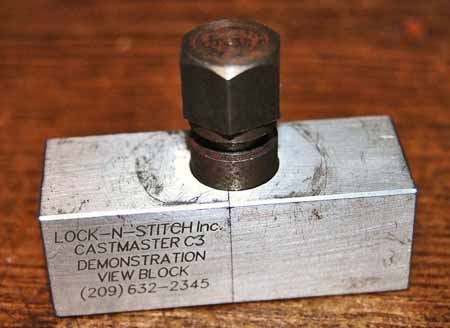 Here the shoulder of the C-series stitching pin is starting to enter the countersink. When fixing a cracked head or block casting, the portion of the pin above the surface of the hole would be twisted or ground off. 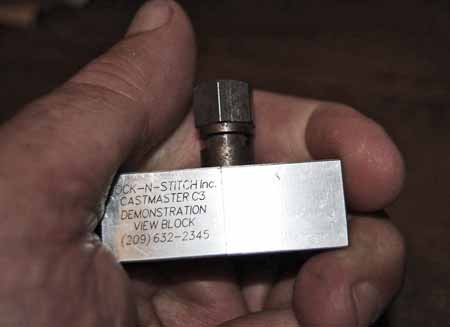 After a wrench is used to tighten the stitching pin, it holds to two sides of the demonstration block (or crack) together and you cannot separate them any longer.

Stitching pins make the job of repairing a broken casting easier for the average person who doesn't have a metal fabrication shop. But they also allow anyone to make a stronger repair. The stitching pins are designed to provide structural strength and a high-pressure seal over every inch of the repair and not just at certain intervals like other metal stitching methods.

Stitching pins can repair castings that are between 1/8-inch thick up to four inches thick. They are installed in an overlapping series over the entire length of the crack, creating strength and a high-pressure seal. The pins use a patented hook thread with a negative 20-degree pressure angle on the top side of the threads. The shoulder above the threads (which we spoke of above) has an opposing negative 30-degree hook angle under it.

When the shoulder seats into its counterbore, the pressure angle of the pin comes into contact with the matching pressure angle on the underside of the tapered hole. As the stitching pin is torqued, a radial drawing force is created, pulling the two sides of the joint together. The sealing mechanism of the stitching pin is complex and has many metal-to-metal contact surfaces.

Lock-N-Stitch sells two different series of stitching pins. The L series pins are popular for sealing cylinder heads because these pins seal on the threads making it possible to install them at steep angles. When the L series pins are used they seal on the threads because the pin is bigger than the tapped hole. The pins install up to the shoulder. Then, the heads are twisted off. This leaves a small amount of the metal pin above the surface, so this needs to be ground off or machined off.

It is not necessary for the tapered shoulder of the L series pin to evenly contact the surface and it usually won't. Where a perfect finish is needed, such as on a machined surface, the pin will crush into the surface and leave a perfect finish after a little machining. When extra material needs to be machined from the repaired surface you have to use a countersink to allow the pin to seat deeper. The same holds true when you're fixing hard cast iron areas, such as valve seats.

Lock-N-Stitch recommends stitching across cast iron intake and exhaust seats and re-machining the new seat right over the pin without installing a seat ring. Many times repairs can be made to damaged aluminum heads with L4 aluminum stitching pins and the seats won't have to be removed. The tap can cut right into the side of the valve seat.

A second type of stitching pin is the C-series, which draw cracks together, instead of spreading them apart. Special Spiralhook™ threads generate a drawing pressure that actually pulls the sides of a crack together and permanently locks them together. Almost all repairs made to cylinder heads below the seat angle are made with L series stitching pins. C-series pins can be used from the bottom of the seat angle outward to the end of the crack. 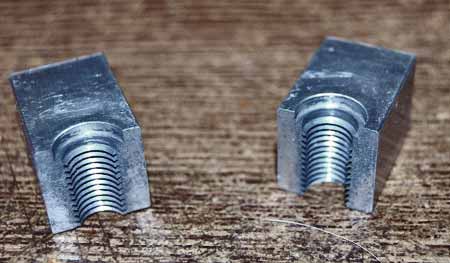 The C-Series (for Castmaster™) stitching pins have special Spiralhook™ threads that draws the side of a crack in, rather than spreading them out. The thread also permanently locks the sides together. 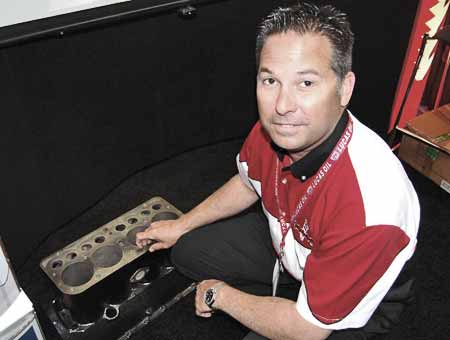 David Silva brought a repaired Model A Ford engine block to the trade show. All of the cracks that were once obvious in the deck surface can no longer be seen. The stitching pins were machined to ensure a smooth deck surface.

Silva points to the repaired area on the Model A Ford engine block. Hardly any signs of the once bad cracks are discernable. 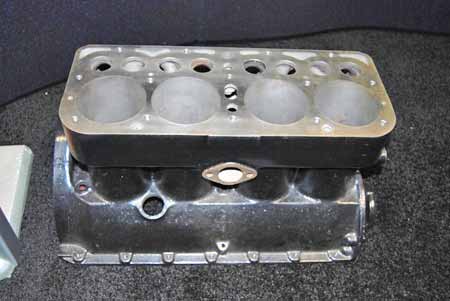 Here's another view of the repaired Model A Ford engine. Cast aluminum blocks can also be repaired by switching the dimensions and style of the stitching pins used. 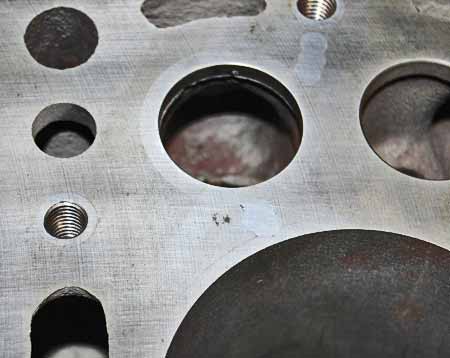 Here is a close-up look at the repairs to the Model A engine. It is actually hard to spot the machine work done to smooth out the surface after the top of the stitching pin was removed.