In the United States, destination motoring became quite popular in the late teens and 1920s. While Nelson Jackson was the first person to cross the continent by auto (in a Winton) in 1903, a transcontinental trip was still big news in 1915. At that time there were still no interstate highways, few paved roads and even fewer reliable road maps and guides. The Automobile Blue Books guided tourists in the early part of the century but by the late 1920s traditional road maps became quite common. Road maps became so common, in fact, that it was difficult for a point of interest or special destination to stand out. To rise above the masses and catch a motorist's eye, hotel associations, motoring groups, companies and tourism bureau's started publishing roadmap lookalikes to lure you in to visit and spend your money. Soon these destination maps, brochures and folders became just as ubiquitous as general road maps but they served a purpose then and still do today. 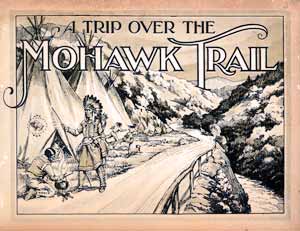 The Mohawk Trail in Massachusetts starts in North Adams and ends in Greenfield. It was opened and 1914 and became a top honeymoon destination by the 1920s. The 35-mile trail provided a gorgeous experience in the Berkshires, and featured canyons, tunnels, overlooks and even a hairpin turn. A mid-1920s catalog measuring 11" X 8-1/2" highlights the features and history of the trail. Within the 30-pages, the catalog shows vehicles on the trail (mostly unpaved), a road map and a listing of distances to major cities from the trail. The trail is described as "a marvel in engineering and construction" providing "beauty, splendor and grandeur" to the motoring tourist. A special centerspread opens to show the panoramic view from the Westview Gift Shop and it is captioned "America's Switzerland". 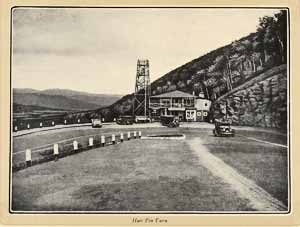 View along the Mohawk Trail.

Traveling south and moving forward to 1934 we find a brochure for Florida's original Orange Blossom Trail. Today's OBT is a known as a 7-mile strip of crime and ill repute but the original trail stretched from Jennings in the north to Key West in the south. The trail was launched in 1934 and led motorists through Florida's agricultural section. The brochure states "Lucky is the traveler who enters Florida over highway No. 41" who will see "one of the nation's most naturally beautiful highways" and promise "no monotony for the motorist." In addition to the road map, the brochure includes photos of various recreational activities that visitors can enjoy including fishing, hunting and boating. The brochure also lists each city that the motorist will pass through along the trail with comments on each. In 1934 Jennings was known as "the trucking section" of Hamilton County and the University of Florida's population of just 16,000 could be found in Gainesville. In 1935 Orlando had never even heard of Walt Disney but they did have a 23-mile scenic road that circled the city's thirty-three freshwater lakes. 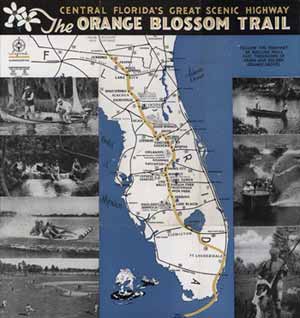 Also from 1934, the state of New Mexico issued a fantastic booklet for motorists. Part road map and part tourism guide, the 72-page booklet shows a driver not only what to see in the Land of Sunshine but how to get there as well. It covers nearly every US and state road within its boundaries. Maps are detailed but the impatient driver would not be thrilled to read that "all important state roads in New Mexico are under maintenance." Four pages are dedicated to U.S. Highway 66, still fairly young in 1934. The booklet reports that Route 66 "hurries the motorist westward but gives many chances for pleasant stops at points of interest." The booklet concludes with a brief summary of motoring laws and a reassurance that the New Mexico Motor Patrol "is not an organization of swearing, snarling 'where the so-and-so do you think yer going', but a specially trained, highly competent corps of men." If you did happen to violate a traffic law, the booklet states that "you will be courteously informed as to what the custom and law is and allowed to proceed."

These three brochures are just a tiny sample of motoring guides and brochures used to lure visitors and their wallets. You could still use them today to navigate the same roads although the pictures, descriptions, and free pass when breaking the law have probably changed quite a bit!