Second Chance Garage decided it was time for a road trip, and what better trip to take than to Nashville, TN to see the Frist Center for the Visual Arts' exhibit of Art Deco cars, titled "Sensuous Steel: Art Deco Automobiles".

It's about a 7 hour drive from SCG's offices in Salem, Virginia to Nashville. We stayed at the Union Station Hotel, which began as a train station built in the 1890's. It's heavy-stone Gothic architecture features a 65-foot barrel-vaulted lobby with gold-leaf medallions and Luminous stained glass. A really spectacular edifice. And it's conveniently located next to the Frist Center. 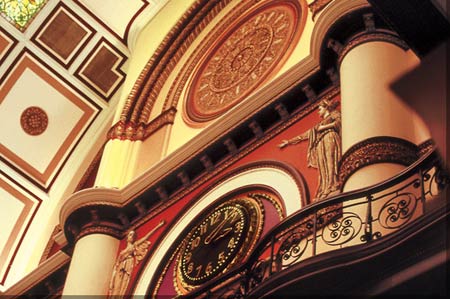 A view of the interior of Union Station Hotel.

There couldn't be a more suitable venue for displaying the Art Deco cars. The Frist Center building is a fabulous Art Deco style building, originally built as a post office in the 1930s, and repurposed as the Frist Center for the Visual arts in 2001. It features many of the geometric shapes and lavish ornamentation typically associated with Art Deco architecture.

A style closely related to Art Deco is Streamline Moderne (or Streamline) which emerged during the mid-1930s. Streamline was influenced by modern aerodynamics developed for aviation and ballistics to reduce air friction at high velocities. Designers applied these principles to cars, trains, ships, and even objects not intended to move such as refrigerators, gas pumps and buildings. Cars in the exhibit feature Art Deco as well as Streamline motifs.

One of the cars you see first is a bright orange 1930 Cord L-29 Cabriolet. The orange paint was custom ordered by the car's original owner, Frank Lloyd Wright, who dubbed the color Taliesen Orange, after his Prairie School design studio.

The Cord L-29 was the first American front-wheel drive car to be offered to the public. Because there was no drive shaft, the car was much lower than competing cars. 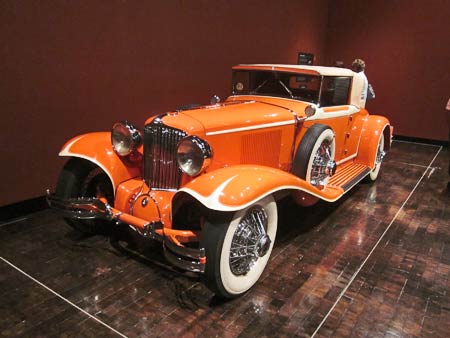 Originally designed as a racecar, the 1938 Talbot-Lago T-150C-SS proved that there was more to a racecar body than protecting the driver from the elements. The sleek, streamline, "tear-drop" design became a trend setter as car manufacturers were considering using streamline design in the manufacture of their vehicles. 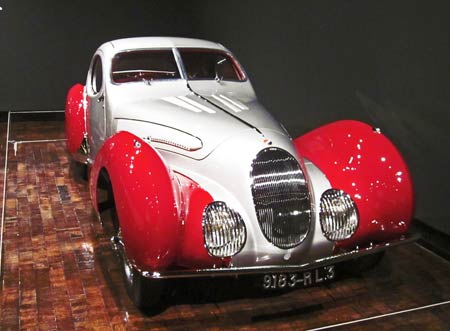 Once owned by the Shah of Iran, custom coachwork on this car was built by one of the greatest coachbuilders of France: Gangloff, Saoutchik, Letourneur & Marchand, and Vanvooren. Okay, folks, it doesn't get any better than this. 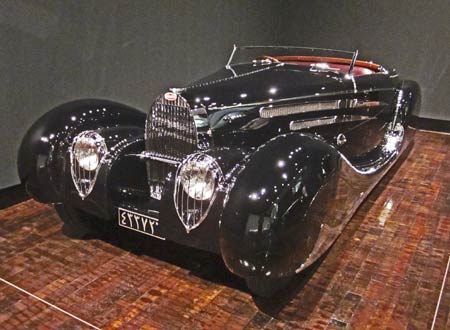 In 1932 Andre Dubonnet bought a French built Hispano-Suiza chassis and used it to showcase his automotive ideas. Gullwing side windows, wrap-around windshield (not to be seen in production cars again until the 1950's) and an independent front suspension system were some of Dubonnet's innovations applied to this car. 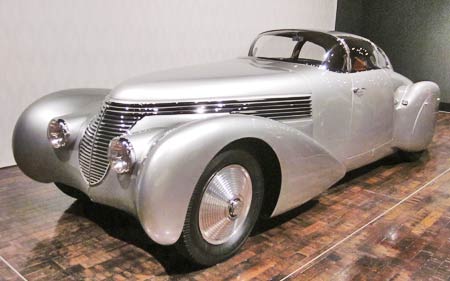 These are just a few of the 18 cars and two motorcycles that make up this fabulous exhibit of Art Deco cars of the 1930's. This is a once-in-a-lifetime opportunity to see this many cars of this type in one location. The exhibits continues until September 15, 2013. Try to visit; you won't be disappointed.