A small automatic transmission fluid (ATF) leak was driving Pontiac fan Bill Mawbey crazy. The Stevens Point, Wis., resident had the Tempestorque transmission in his 1963 LeMans convertible rebuilt twice. Each time he wound up with an ATF leak in roughly the center of the car.

This may be where you'd expect to find transmission fluid leaking on most cars—but not on a 1963 Tempest or LeMans. These cars have a "rope" driveshaft and a rear-mounted transmission and transaxle arrangement. If ATF leaks occur, they should be at the rear axle area. A mystified Mawbey took the car back to the shop and heard those immortal words, "It's an old car and all old cars leak." Bill knew that something was causing the leak and needed fixing.

He brought the car to Gunner's Great Garage and the fix turned out to be a pretty simple one. It just took a bit of knowledge and some good, long-time hobby contacts to pinpoint the cause of the leak and fix it at very low cost. The only tools required to do the job were a socket wrench.

Bill's Tempest has a very clean undercar area that made the job of tracing a leak very easy. As the accompanying photos show, the LeMans with automatic transmission has its torque converter far back on the chassis, just ahead of the fuel tank. The transaxle sits ahead of the torque converter and the transmission sits in front of the transaxle. After raising the car on the lift, it was easy to spot two fluid leaks, one of which was clearly ATF. 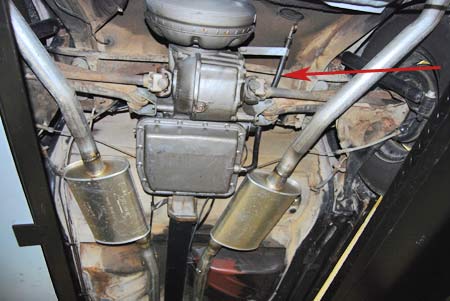 Undercar view with rear towards top. Torque converter is behind transaxle with transmission in front. Parking control cable (red arrow) was carrying leaking ATF from tranny towards the middle of the car, where it fell.

There was red ATF all around a tubular-shaped part that was bolted into a hole in a cast "shoulder" extending out from the passenger side of the transmission. This tube turned out to be a fixture on the rear of the parking control cable. Another section of this fixture that installs into the transmission looks like a spring with a mini flashlight stuck in its end. 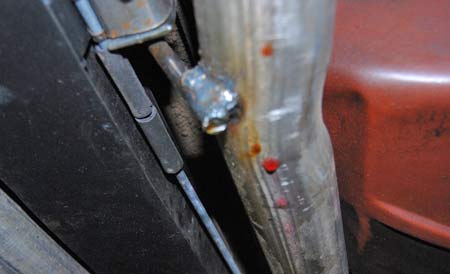 Some of the ATF was dropping on the exhaust pipes and burning off, but most of it traveled to the point where the parking control cable passes thru the floor to the car's interior. A rubber seal there caused it to drop at center of car. 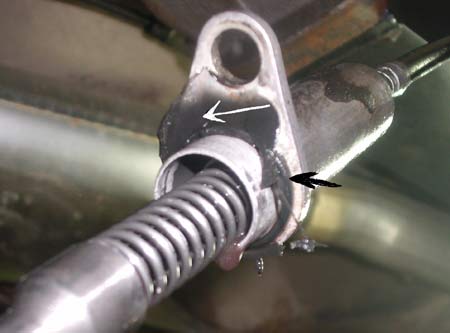 There's a flange between the two sections that's shaped like a cheap plastic key ring with a hole in the narrower end for a bolt to pass through. Once you insert the spring/flashlight end into the opening in the transmission shoulder, a single bolt goes through the hole to fasten the entire fixture to the transmission case. Personally, we think that any flange that tightens at one end only might have a propensity to leak, so there may be a little bad engineering here. 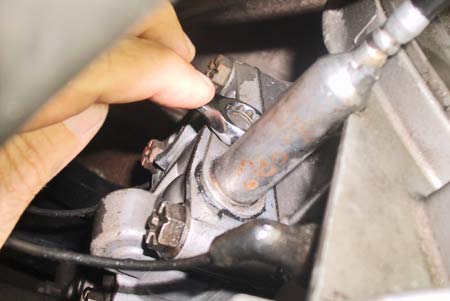 A single bolt at the top of the flange around the parking control cable end fixture fastens it to a "shoulder" piece on the tranny. The O-ring gets squished between the bottom of the flange and the shoulder casting. 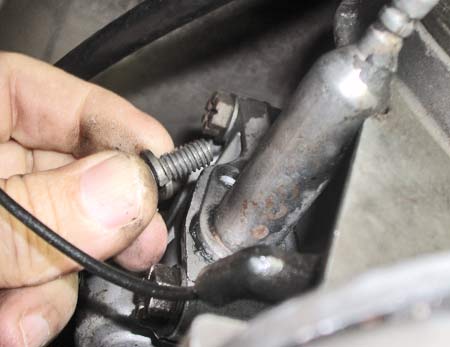 When bolt is removed, the parking control cable end fixture can be removed from the tranny case. This could be bad engineering, since tightening up only the top of the flange may pull the bottom slightly away from the O-ring.

The next step before taking the parking control cable fixture out of the transmission case is to drain the fluid out of the transmission pan. Since the shop manual didn't state this, we wound up with a mess because the ATF came pouring out and we had nothing to catch it in. So, have a catch pan or container and large funnel ready when you pull the fixture away from the tranny.

When we removed the bolt and pulled the fixture away from the transmission case, we saw that the transmission side of the flange had some black goop on the end of the tube and a thin O-ring around the tube. The ATF had obviously done a job on the black sealer, which had been turned into a gooey fluid. It certainly wasn't sealing anything and Bill Mawbey's shop manual said nothing about using a sealer at that location. We immediately wondered if someone used sealer because they knew they did not have the correct O-ring. There's no way to know this for certain, but the O-ring around the end of the tubular fixture sure seemed too thin for this particular application.

Whether to O-ring was correct or not, we could clearly see that Bill's small fluid leak was coming from this spot. Are you confused by this statement? Didn't we previously say the leak was at the center of the car? Good observation, but here's what was taking place. A tiny amount of ATF was constantly leaking past the O-ring to the tube-shaped end of the parking control cable. The red fluid was then traveling along the cable, with a small amount dropping on the exhaust pipes below. Most of the fluid was traveling to where the parking control cable passes up through the floor and into the car's interior. There is a rubber grommet in the floor at this point. Since the ATF could not go past the rubber grommet, its travel stopped in the center of the car and it fell to the garage floor.

Since we suspected an incorrect O-ring, we got in touch with Larry Fisher at Fatsco Transmission Parts and sent him a scan of the O-ring as an email attachment. As we anticipated, Larry took one look at the O-ring and told us that the correct one had the same inside diameter, but was made of thicker rubber. Fisher mailed us the correct O-ring in a regular envelope. It arrived a few days later, we placed it around the fixture (using no sealer of any type) and we then installed the spring end of the fixture back into the tranny, pushed the flange and o-ring up against the opening and carefully tightened the one bolt to factory specs. Torquing it too tight might have prevented a flush seal. 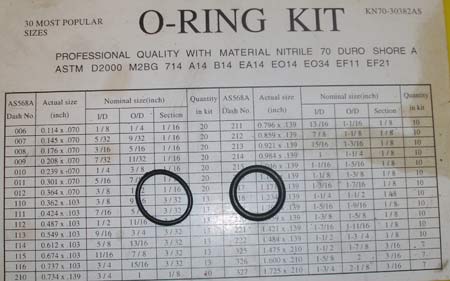 O-ring on left is the one that was on the car. O-ring on right was sent by Fatsco. You can see the difference. We had checked our own O-ring kit and probably had the right one, but only Larry Fisher knew the correct one for sure.

We refilled the transmission through a filler tube that comes up through the trunk floor and put white paper along the route of the parking control cable to check for any leakage. There wasn't any. And we verified with Larry Fisher that operating the car would have no effect on whether ATF leaked at that location. He told us that if we still had a leak, it would happen when the car was just sitting the same way it had before. As for the second leak we mentioned, that appeared to be coming from the transaxle side cover oil seal or O-Ring and may be the subject of another technical article in the not too distant future.