Fixing A Pane in the Bottom

Local glass repair companies do a good job of helping car restorers. Auto Glass Specialists in Wisconsin helped take care of a real "pane in the bottom" situation. A 1953 Pontiac Catalina been resting (and rusting a bit) during winter. On its first spring ride the car hit a bump and the door glass fell to the bottom of the door. The glass was OK, but no longer attached to the window-riser.

Auto Glass Specialists removed the trim from the inside of the Pontiac's door. The window was supposed to fit snuggly in a metal sash channel that had metal two tabs welded to the bottom of it. The screws that go through holes in the tabs fasten the sash channel to a cam track. The scissor-like part of the window regulator that raises the glass, rides back and forth in the cam track. 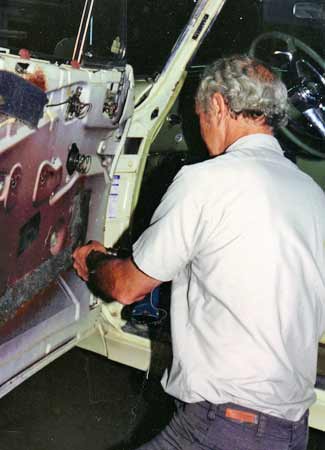 After the door window of this '53 Pontiac hardtop dropped into the door. Auto Glass Specialists, of Stevens Point, Wisconsin, removed the door panel to get at the glass and the parts of the window riser mechanism.

Leaking water and condensation had corroded the sash channel. It was so badly weakened that 75 percent of the lower edge of the window had pulled out of the sash. In addition, the spot welds attaching the tabs to the sash were broken, leaving the window loose enough to hop out and fall into the door. 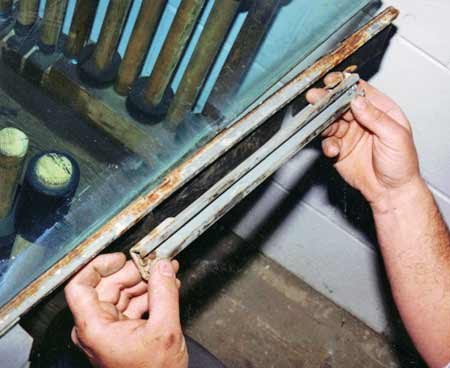 Spot-welds on the gray sash had had broken, due to rust. This caused the rusty channel on the bottom of the glass to separate from two metal tabs that normally hold the door glass to a channel that the sash slides in.

The inside door trim was removed to reveal the holes that allow access to the window-riser. To reach some of the fasteners, the window sash has to be repositioned. The screws that hold the tabs on the sash to the cam track can then be removed. After loosening the sash channel, it can be removed. A new sash channel was not available, so the old one was repaired by spot welding. 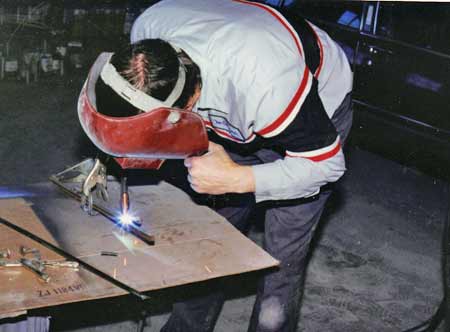 Careful welding was required to attach the metal tabs back on the sash channel without welding them to the cam track. During re-assembly, the cam track is attached to the window-riser mechanism before it's re-installed. 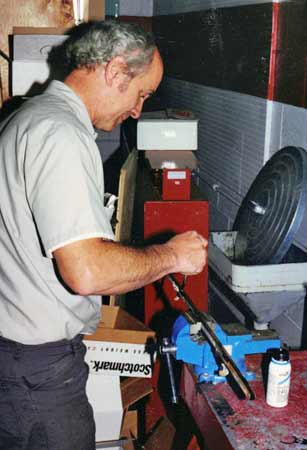 The rust-weakened channel had to be removed from the bottom of the glass, cleaned and treated with a rust preventative to stop further corrosion. Here a technician applies an epoxy to bond the channel to the glass.

After the welding was completed, the sash channel was prime coated to protect it from future corrosion. The bottom edge of the window glass was coated with glass primer and it was pressed back into the sash channel. A bonding agent was applied to ensure a tight fit. The bond was allowed to set up. Then, everything was re-assembled by repeating each step in reverse. Viola, the Pontiac had a driver's window again! It fit tight and worked perfectly. 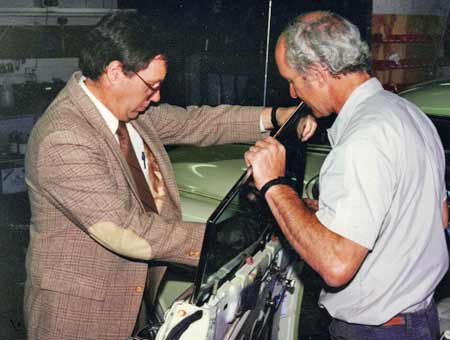 After the bonding agent set up properly, everything was put back together and re-installed in the door of the car in the reverse order of disassembly. This fix worked perfectly and has lasted 15 years so far.