How and Why of Cracked Distributor Caps

[This article originally appeared in the March 1936 issue of Automobile Digest.]

LEAKAGE of current is quite often difficult to locate as the short is not always continuous. Frequently it is only noticeable when the cylinder is under maximum compression.

The distributor cap is an important part in the secondary circuit of the ignition system and must be in perfect condition to have a properly tuned engine. Minute cracks in the distributor, between the spark plug terminals, not always visible, will permit the high tension current to short circuit and the result is erratic operation of the engine. When the distributor is cold, the crack may be of hairline nature, but when heated this opens and permits dirt, moisture and oil to enter. The current gradually converts these elements into carbon and the current then has a direct path. Distributor caps may also become porous and oil soaked after long use and thus similar conditions are promoted. 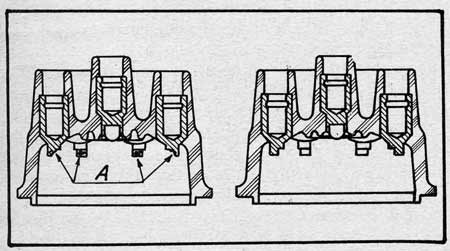 Sectional views of a distributor cap of modern design showing inserts. View at the left shows burned contacts "A".

These carbonized streaks offer less resistance to the path of current. The presence of this carbon path or "leakage" must be attributed to the break down of the insulating material as the design of jump spark distributors is such that a carbon path between terminals or segments inside the cap cannot form. The carbon path inside the cap is more generally found in the old type distributors in which the rotor makes contact with the segments and there is only a small gap between the rotor and the wall of the cap.

When high tension current leakage exists, the result is misfiring of the engine and this may even result in failure to start when the engine is hot, but failure to start may not result when the engine is cold. With burned segments or terminals in the distributor cap the engine will misfire and may appear to be out of time. The heat of the spark jumping from the rotor to the insert will in time burn the insert. However, the action is slow and no ill effects will be noticed unless the insert is burned more than half way through.

Burning can usually be detected by careful and thorough inspection. If the cap is not properly placed on the distributor, the rotor may strike the insert as clearance is limited to about 1/64". This may result in bending of the rotor contact as misalignment may be sufficient to close the gap. Careless installation of the cam and rotor may also result in damage to the cap. Be sure the cam and rotor both are properly seated before assembling the cap. This will avoid having the rotor gouge a track into the inserts. Do not force the cap into the locating shoulder of the distributor as this may cause sufficient distortion to set up misalignment.

When a crack exists from the central terminal to one of the inserts, all of the current will mostly short circuit to the one insert with which the circuit is completed. In this case all of the high tension may go to one cylinder. When a test is made on a test stand equipped with Neon or Geissler tube, this condition will usually be indicated by a double flash in the tube, although this could also be an indication of defective ignition cables. A simple test is to substitute a new cap and then note the performance of the engine. The cross firing due to a short as would result when the cap is cracked would also be evident by the engine back firing.

The effect of the spark jumping from the rotor to the insert is to form a scale which offers a high resistance to the secondary circuit. Inserts should be inspected and cleaned at intervals to avoid having a weak spark at the plugs. It is not advisable to attempt repairs on distributor caps as the inserts are moulded in the cap and cannot be removed. Also, the cost of a new cap is much less than the labor involved in attempting a repair.

When the rotor makes direct contact with the insert, it is possible for a carbon path to form between the inserts. While it is sometimes possible to make a repair which is temporary by scraping the surface with a knife or other sharp instrument, such repairs are always unsatisfactory. Scraping will decrease the dielectric strength of the material in which the moulding crust is valuable.