Jon Hardgrove says selecting the best size carburetor for your '50s, '60s or '70s car is "a simple question with a complicated answer." Jon believes it is not so much a question of cubic feet per minute (cfm) ratings as the relationship between your car's "ideal" cfm value and several other factors.

Jon's Carburetor Shop in Eldon, Mo., (www.thecarburetorshop.com) specializes in restoring — as opposed to just rebuilding — classic-car (mostly GM) carburetors. He told us that an engine's air intake volume requirement is measured in cfms. Factory engines represent a compromise between economy, efficiency, reliability and performance. They achieve about 80 percent volumetric efficiency at red line. Engines tuned for performance or using a hot camshaft and valve combination — like many muscle cars — can achieve up to 92 percent efficiency. Racing engines with roller cams and blowers go 100-115 percent.

The more cfms a carburetor delivers, the higher the volumetric efficiency will be — to a point. Hardgrove's formula for calculating an engine's cfm requirement is cfm=CID x RPMs divided by 3456. "The formula gives the cfm requirement for 100 percent volumetric efficiency for any 4-stroke engine with four cylinders or more," he says. "One problem is most people use Maximum RPM in the formula instead of looking at Cruise RPMs."

Hardgrove warns there's more to consider than just cfm values. "Where the problem comes in, if you are trying to come up with the best carb for an older car, is in the intake manifold design. You have to look at the bolt and flange patterns, since the same ones are not used on all carburetors."

Design features like bolt patterns and throttle bore spacing vary even on older engines of one brand. "The carburetor from a 1961 Chevy V-8 may not necessarily fit the 1956 Chevy V-8," Hardgrove explains. "You also get into other things like differences between GM flanges and Holley flanges. The bottom line is, you can't go strictly by cfm when selecting a carburetor."

For street-driven cars, Jon suggests spread-bore carburetors like the Rochester Quadrajet and Carter Thermoquad as "the way to fly." He says that some Holley four-barrels fall into this category, but he is not a big fan of Holleys. "Unless you have a racing application, spread bores work best," Hardgrove believes. "Assuming that you don't drive wide-open all the time, you're going to be running mostly on primaries and the spread-bore carb has smaller primaries."

Jon also warns that if you are changing from a square-bore carburetor to a spread-bore model, it's important to use the appropriate manifold. "Never use an adaptor," he advises. "For maximum efficiency and performance, you want a manifold that's correct for the type of carburetor you're using. 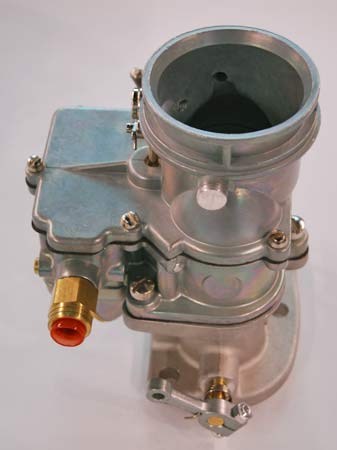 Speedway Motors now offers a reproduction version of one of the most popular carburetors ever used, the original Stromberg 97! Original equipment on '30s and '40s cars and trucks, It flows up to 184 cfm with 28 inches of vacuum. 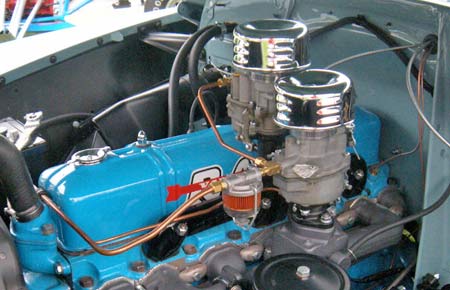 This is a '52 Chevy six fitted with a special Ra-Jo intake manifold on a second set of intake ports with a second carburetor. Each of the carburetors was engineered to feed fuel to all six cylinders. Ra-Jo called this Compund Induction. 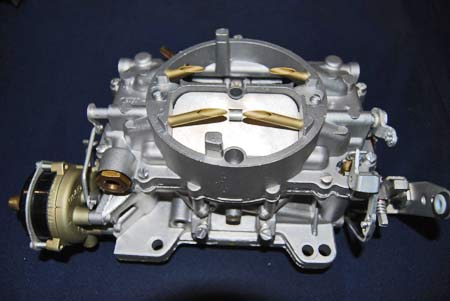 A good source of restored Holley, Rochester and Carter carburetors for GM cars is Chicago Corvette Supply, which did this beautiful carburetor restoration. Visit carburetors@chicagocorvette.net for more information. 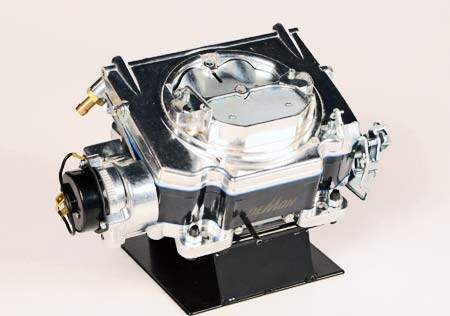 Holley's Demon and Street Demon carburetors are popular with today's performance car builders. Many enthusiasts like theway that shiny finish looks on an engine. This is the company's 625 cfm model. 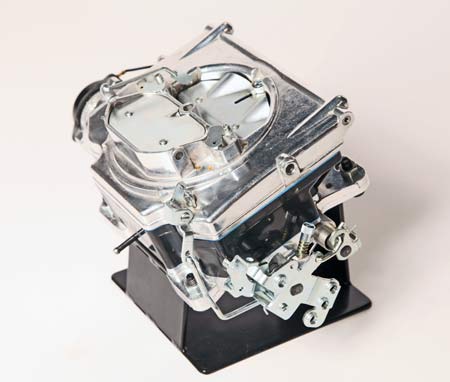 This is Demon's 625 cfm Triple Stacker carburetor. The Demon carburetors feature many superior qualities, but their contoured air entries are probably their leading asset. The power is in the carburetor's profile. 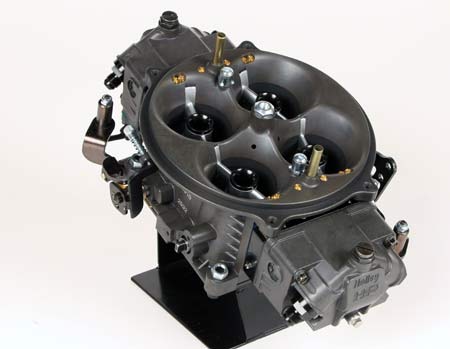 Here's a Holley 1475 cfm carburetor. This is what you need if you're going to be feeding fuel to a racing engine. Jon Hardgrove's formula for calculating an engine's cfm requirement is cfm=CID x RPMs divided by 3456. 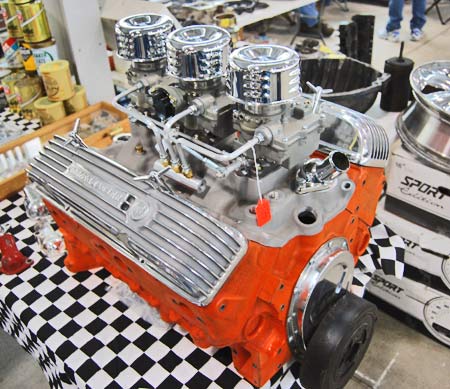 Multiple carburetor setups like the Tri-Power system on this small-block Chevy use a progressive linkage so that you get CFMs you need for the speed you are driving. Most of your driving will be done with only one carburetor in use. 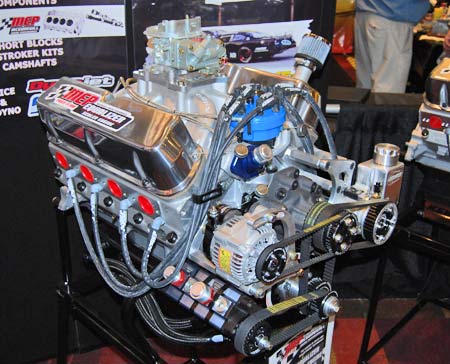 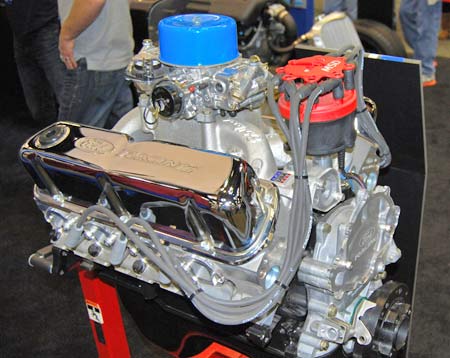 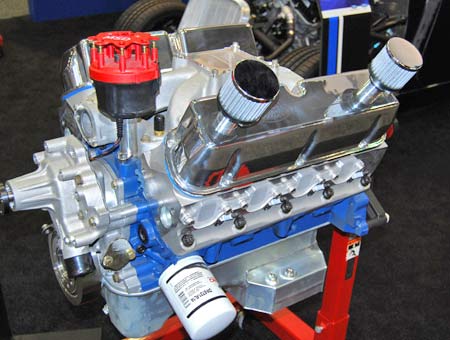 This is Ford's D347SR "Blue Oval" sealed racing crate engine. It features an Edelbrock Victor Jr. intake. It's designed for use with a Holley 600 cfm carburetor and so equipped will put out 415 hp and 400 lbs.-ft. of torque. 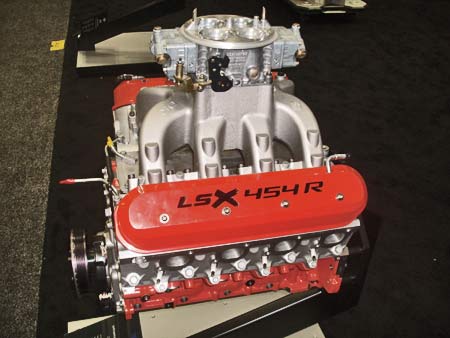 Chevy's LSX 454R crate engine is aimed at the drag racing market. It is fitted with a Holley Dominator carburetor. These come in different models from 750 cfm to 1475 cfm. With the right fuel setup this motor will make 770 hp.