Abrasive Blasting Cabinets: Blasting Parts from the Past

When we purchased a 60-in. wide dual side opening abrasive blasting cabinet with a light and a dust collecting system we thought we could throw our dirty old parts in the big cabinet and blast them clean in a few minutes. Soon, we discovered that there was more to cabinet blasting than meets the eye. 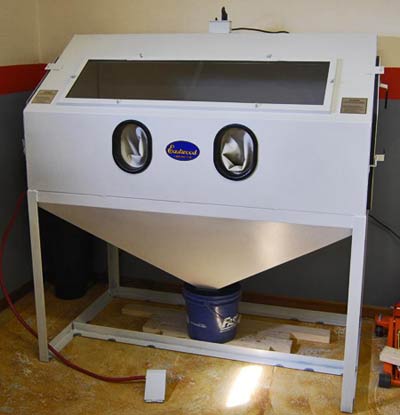 Cabinets come in various models from bench types to large units like this 60-in. Eastwood model. The size of your workspace, the jobs you plan to do and the size of your compressor all factor into picking the right cabinet. 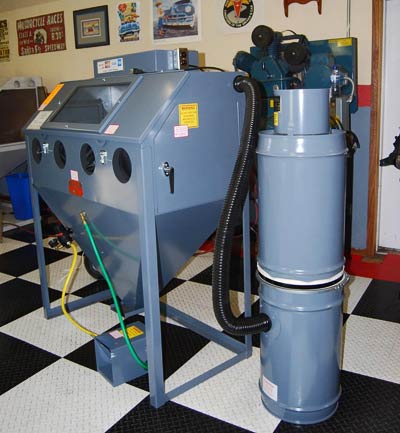 The media blasting process done inside the controlled environment in such a cabinet sends abrasive media such as light sand, glass beads or washing soda flying against the parts under pressure to take dirt and finishes off them. Abrasive blasting can also smooth rough surfaces. Abrasive blasting cabinets allow you to blast within an enclosed space without getting sand everywhere.

A siphon system is used to pull the media from a hopper at the bottom of the cabinet and direct it through hoses to a nozzle or gun. That device "shoots" the blasting media onto the object being blasted. Because it's retained in the cabinet, the blasting media can be sucked back into the system and reused.

The person doing the blasting looks through a Plexiglas or glass observation window and controls the process by putting his arms into protective gloves that extend into the cabinet. The fingers of the gloves allow the user to move the hoses and direct the flow of the media coming from the nozzle or gun.

A large cabinet typically requires a minimum air volume of 20 CFM @ 909-100 psi. Sand is very aggressive media, but it clogs easily. It tends to get wet and it also gets dirty very quickly. The silica in sand can cause medical issues. Glass bead is a popular media, but is best for finer jobs. It doesn't get dirty as quickly as sand, but it also doesn't strip old paint off very quickly. For most blasting jobs done in old car restorations, aluminum oxide is an excellent media to use. 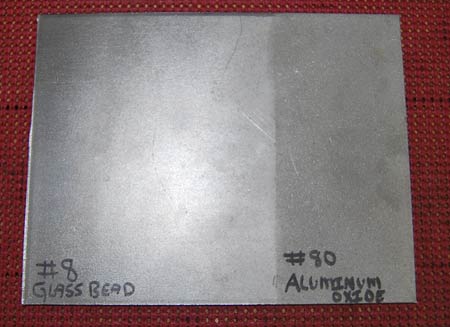 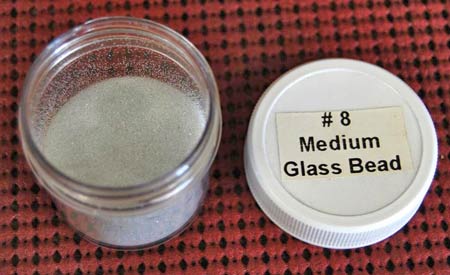 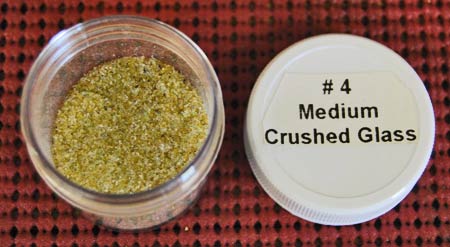 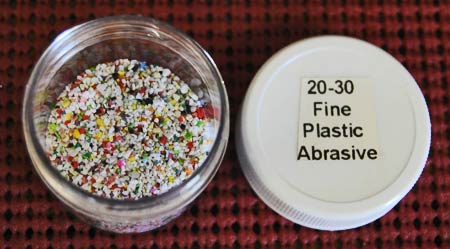 This 20-30 Fine Plastic Abrasive looks like you could sprinkle it on a cookie or birthday cake, but that's not a great idea. (Photo courtesy Metal Finishing Supply Co., Brookfield, Wis.)

When you are having problems flowing media or if the media you're blasting is coming in low quantities, you may have a moisture problem. Moist air does not agree with sand blasting. Always try to put your cabinet in an indoor dry air environment. Another common cause of too little or no media is leaky valves. If your blaster does not seem to be functioning properly, unplug it and check all the valves on the compressor and the cabinet, making sure they are all properly hooked up. Many valves purchased in big box stores or at swap meets are made offshore. Replace leaky ones with high-quality "Made in USA" valves.

Moisture or dirt can clog a blast nozzle. If you suspect this, stop blasting and get the nozzle cleared. Use a pick or drill to clean the nozzle tip. You can also disconnect the hose and use it to push a little air back up the tube to spray out any gathered dust or clogs or to gently blow debris out of the gun nozzle.

Abrasive media tends to etch the cabinet window, making it impossible to see what you are blasting. Most new cabinets have replaceable plastic protective sheets designed to cover the inside of the window. There are also rolls of protective film that you can stick to one side of the cabinet window, then pull the plastic film out of to run it under the window and pull it through on the other side. This will require loosening and tightening the thumbscrews that hold the window on and on some cabinets you may have to cut off the center side thumbscrews.

Blasting cabinets need air to flow through them and have two vents for air inlet and outlet. Some blasting dust will escape. This is why you should always wear protective gear, eye protection and breathing aids when blasting. Another thing you can do is to use hoses from the vents to the outdoors so the cabinet is always pulling in fresh outside air and venting the exhaust to the outside.

Since cabinet sand blasters reuse their sand, you will need to keep an eye on the condition, color and amount of the abrasive material that you are using and replace it when it gets too dirty or too low. If debris can be seen or if the media is getting rounded off or powdery, then you need to replace it. The medium should stream out of the nozzle instead of creating a dust cloud. 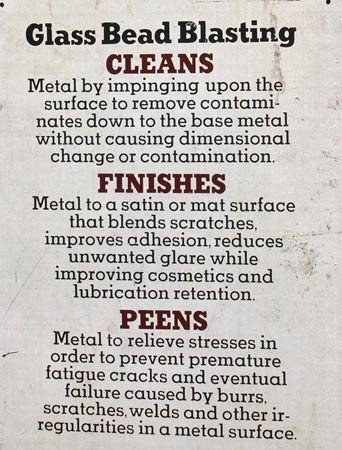 This placard lists the advantages of using a glass bead type of media. Each type of media has its own selling points and is best for certain jobs. (Photo courtesy Metal Finishing Supply Co., Brookfield, Wis.)

A typical blast cabinet siphoning system uses a pipe at the end that you slip into the media through a hole in the grate. The pipe has a small vent hole near the top that must be open to the air. A car club we know of has a blast cabinet that was modified by a member who worked as an engineer. He figured out the siphon pipe would pick up media better if it was mounted vertically. A hole was cut in the center of the front edge of the grating (midway between the gloves) and a plate was attached to hold the siphon pipe at a vertical angle. A second pipe was then attached to the first one and vented to it (in the manner of two straws with holes in their sides mated together). He put the second pipe into the media. This created a "venturi" effect that did a better siphoning job. 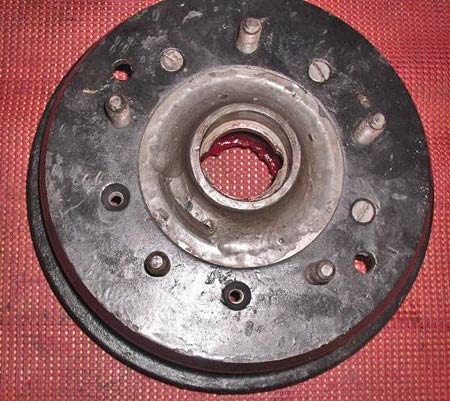 An early MG TD brake drum prior to being cabinet blasted. On a drum like this you'll want to mask off braking and bearing surfaces prior to blasting and clean afterwards. (Photo courtesy Metal Finishing Supply Co., Brookfield, Wis.) 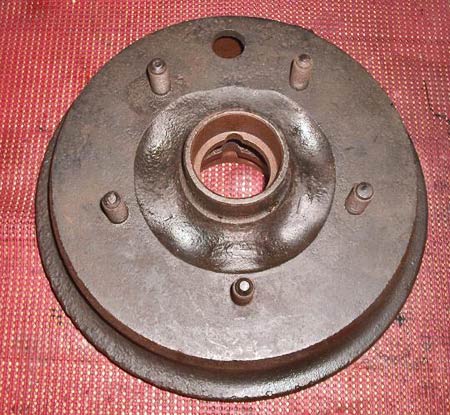 Here is the MG TD brake drum after being carefully masked and blasted. The media blasting leaves a textured gray finish that will often ward off rust for a short time. (Photo courtesy Metal Finishing Supply Co., Brookfield, Wis.) 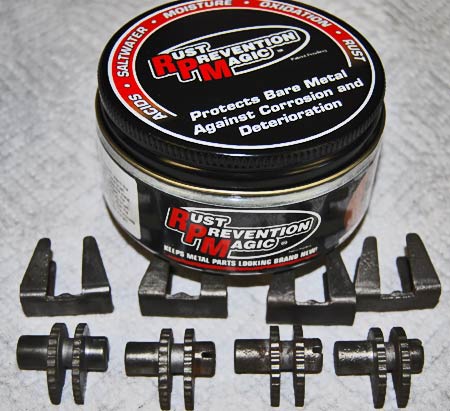 Eventually a blasted part will begin to rust unless protected or painted. Rust Prevention Magic can be used to protect parts that should have the bare metal look. (Photo courtesy Metal Finishing Supply Co., Brookfield, Wis.)

There is nothing to match the cleanliness of a blasted car part. The more you learn and the more refinements you make to your blasting system, the more you will
like it.