We left off last episode with a detailed examination of rust repairs done on the smooth side box of Christopher Medwechuk's 1961 Chevrolet Apache truck. The rear half of the frame was cleaned up and detailed with chassis black paint. The bed had the wheel well covers painted along with the tail gate and bed strips refinished with new steel carriage bolts to install the floor to the chassis. Before that could be done, the truck cab and interior had to be stripped down and have some metal work performed. Then it was a round of sanding and priming to get it ready for some shots of Brigade Blue paint. Let's look further and see what had to be dealt with. Restoration is like automotive archeology, you're digging into the vehicle's past.

Floyd knew from the new front fenders and rocker panels installed before he started work that some repairs had been done already. To make the front end of the truck meet the same quality of the bed, cab, hood, doors and fenders had to be prepared. The decision was made by the owner to do a partial tear down. Instead of completely removing the fenders and spraying them separately, the doors, hood, grille and bumper assemblies were removed and painted separately while the fenders were handled on the truck. This saved time and effort. 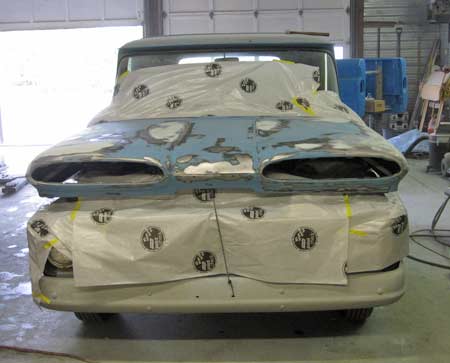 The front clip was repaired and sanded before disassembly for primer and paint.

The lower door panels needed the most work. A patch repair was done on the driver side just past the new fender. Some rust had broken through at one point and was fixed using body filler. This was removed, the hole enlarged until rust free metal emerged then trimmed, sanded to bare metal, prepped for a weld patch. Once new metal was welded, the patch was given some spot putty and block sanded to blend in with the rest of the lower door contour. At the same time, minor imperfections and wrinkles from forty plus years of use were cleaned up before giving the panel a shot of primer. The rocker panel and fender were primed as well. You'll notice quite a lot of work was done on the lower cab corners on both sides. These are common rust out areas for pickup trucks. 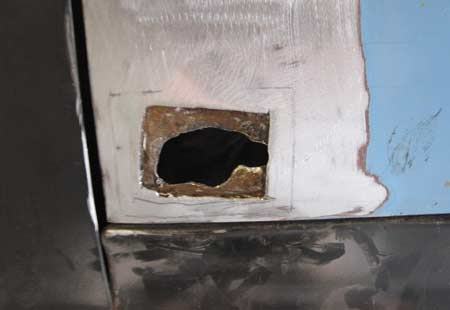 A rust hole in driver's side door was repaired by removing rust until clean metal appeared then welding in new metal. 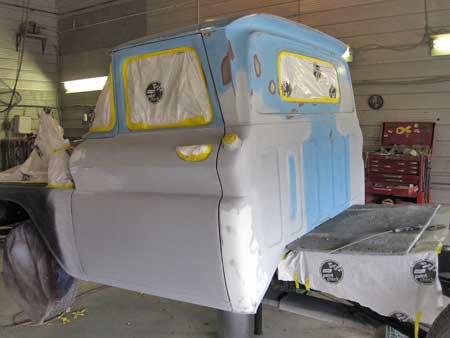 The lower door, rocker and front fenders were primed.

The passenger side cab corner was uneven from flying stones and debris but no rust repairs had to be done. The lower passenger door panel needed the usual block sanding and tidy work to make it smooth for painting. Remarkably both doors were quite solid. 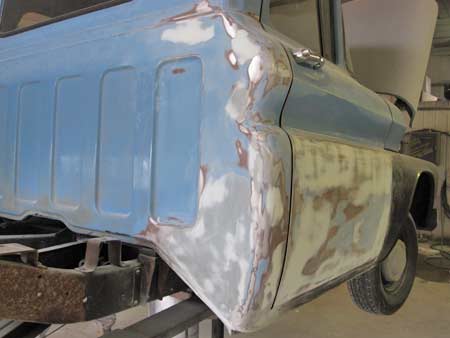 The lower cab corners usually require rust repairs. The passenger side just had rough surfaces from road debris. The doors were pretty solid.

The front end was partially disassembled removing the grille, bumper, hood and related wiring. The bumper was sanded, primed and painted gloss white. This is where I have to make an amendment. In the first episode I mentioned that the bumper, grille and turn signal trim were semi gloss finish in an off white shade. In fact, the finish is supposed to be gloss white. Sun exposure had altered the finish and color. If I'd thought about the color difference between the paint under the side mirror and chrome fixtures on the cab, I would've realized the same changes must have occurred to the painted trim. The Chevrolet grille was also painted gloss white along with the turn signal surrounds. A bunch of parts were ordered and ready for installation in the cab such as new door seals and rubber floor mats.

The hood was sanded down and prepped for painting. There wasn't any rust to deal with, just uneven areas from wear. Once the panels were primed and ready, Floyd shot a couple of coats of paint on. Once it dried he inspected the panels and shot more paint on. Afterwards, the cab, hood and doors were compounded to bring out the gloss. The inside of the cab was next on the agenda.

The bench seat was removed and the metal portions of the dash, cab roof, rear wall and posts were sanded and primed. The dashboard was sprayed in dark silver with light silver accent on the glove box door, radio block off plate, ash tray, heater controls and lower dashboard trim plate. 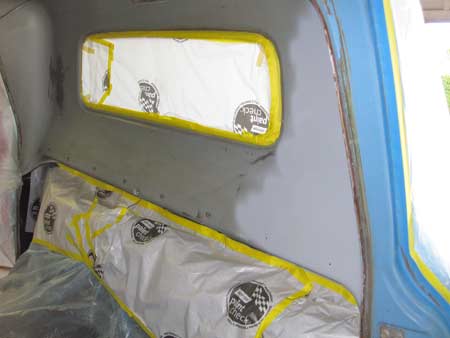 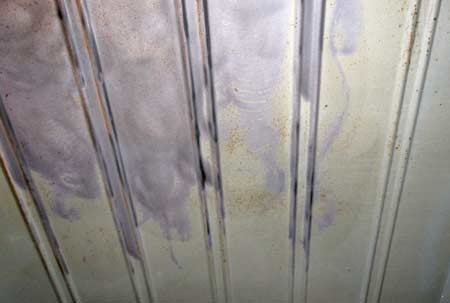 The ceiling, dash and door posts of cab were sanded to bare metal and primed for painting. 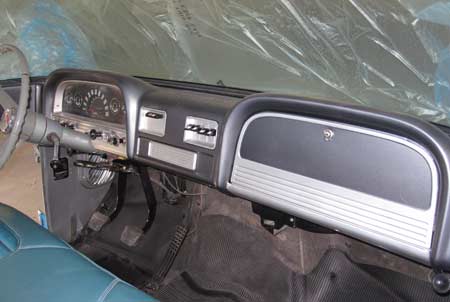 The dashboard was finished in dark silver with light silver accents on trim, bezels and glove box door.

The doors were taken off the cab and sprayed in silver with Brigade Blue panel inserts. For re-assembly, the new rubber floor mat was installed along with new cabin and door panel weather stripping. Clean up and restoration of emblems was done at the same time. This is where you can run into unexpected delays. When it came to door seals, the first set ordered turned out to be incorrect for the truck. The seal groove wasn't the right length to fit snugly along the metal channel. A second set from another supplier was more accurate. A comparison between the two door seals is shown here. These things happen and the only way to deal with it is to do research before ordering and keep samples of the original parts on hand for comparing. Sometimes the supplier cannot supply an exact match and you may have to do some alterations. Once the correct seals were located Ryan installed them. 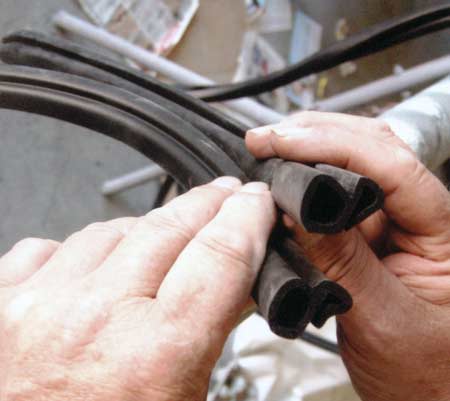 Floyd shows us two suppliers' versions of cabin seals. One has a longer groove than the other.

Once the correct seal was located, the weather stripping was installed. Here Ryan finishes the passenger door seal.

The engine compartment was tidied up but not given the restoration treatment. The straight six was running fine when it came in for work so most of the attention was given to cleaning up the cowl area and priming it for paint. The inner fenders, firewall and radiator frame were painted semi gloss black. The underside of the hood was given a light coat of blue and when it was reattached to the cowl, it rested on new cowl weather stripping and the turn signal wiring re installed. 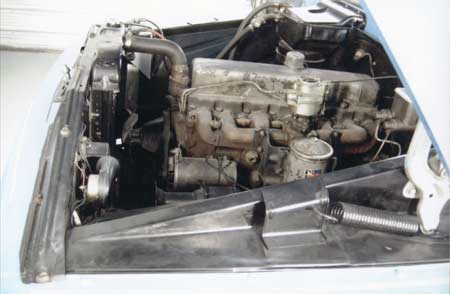 The engine bay was cleaned up using black paint for inner fenders and firewall.

Now the box was ready to be installed. The new varnished Oak planks were cut to fit and installed with fresh painted bed straps and plated carriage bolts. A spare tire was installed on the passenger side to complete the bed. The painted bumper, grille, hubcaps and both doors were re installed and aligned. At the time the pictures were taken, all that was left to do was install the side mirror, front fender scripts and hood emblem. She is ready to hit the road. 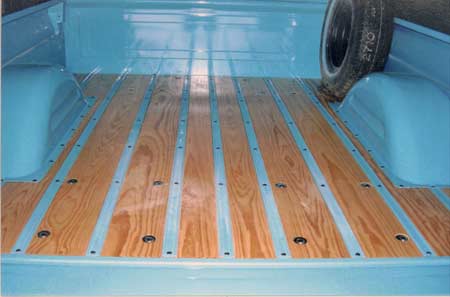 The varnished oak planks were installed with polished carriage bolts and a new spare tire was added. 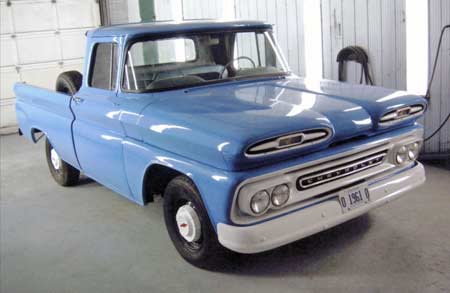 Truck is about to have hood emblem, fender script and mirrors installed before driving away.