Like any car, my 1937 Buick needs a steady flow of good, clean fuel to run properly. Carburetors can be finicky beasts so it is essential that no debris can get stuck in any jets, seats or airways. With this in mind I decided to restore my fuel tank and the gremlins that lived on the inside and outside of the tank. While I never observed any debris or discoloration in the car's fuel pump sediment bowl, I wanted to have complete peace of mind while driving the car. Also the exterior of the tank was covered in a thick, gooey undercoating and I wanted to seal the interior of the tank — this made removing the tank absolutely necessary.

With my car on jack stands and the rear wheels removed, I cracked open the 1937 Shop Manual and read "when it is necessary to remove the fuel tank from the car, remove the filler pipe at upper end, disconnect gas feed pipe from the gas gauge pipe, then disconnect the straps at front end." I also read that "it is necessary to raise the car about a foot" in order to remove the tank. I read everything there and mostly agreed with the approach. What I didn't agree with was the height that I needed to raise the car. Surely the 10-inches of clearance that I gave myself would be plenty right? Wrong. Your first lesson in this journal entry is that if the Shop Manual tells you to do something — do it. You can't outsmart the Shop Manual, there is no sense in trying to defeat the Shop Manual and every line written in the Shop Manual is there for a reason. Let us continue....

The T-bolts on my car that held the tank straps to the frame were in horrible shape. Where there wasn't any undercoating on the threads there was rust. I used a wire brush to remove as much crud off of the threads as I could and this allowed me to slowly and painfully remove the hardware. Perhaps a torch would have loosened things up quicker but you know what they say about fire and gasoline.

When the tank was free from the straps I was able to lower the tank enough to disconnect the sending unit wire. From there all I had to do was drop the tank and twist it toward the front of my car and then I could slide the complete tank and filler neck out. It should have been that easy but rewind a couple paragraphs and read about my thoughts on how high I needed to raise my car. While sparing you the cursing, banging and humble pie I encountered, I can tell you that after I raised my car a foot off the ground my tank slid right out from under the car.

Because the fuel tank wasn't removed when the car received its undercoating I did find some surface rust on the body just about the fuel tank. It was very minor in nature and will easily sand away. I was pleasantly surprised by what I found inside of my gas tank. While there was some varnish present in tank the bottom was not rusty at all. There was some surface rust on the inside-top of the tank as it sat partially filled for years. To see inside the tank I had to use a dental mirror as it was the only mirror I could find small enough to fit inside the 1-1/2" sending unit opening.

The tank's exterior was a complete eye sore. In addition to the undercoating that I previously mentioned there was decades of dirt and grime built up. While not nearly as bad as the build up on my front suspension, it was quite apparent that my arms would be getting a workout as I scrubbed the tank clean. Another obvious thing I needed to address was the cork on my sending unit. While my gas gauge still worked it was pretty obvious that my cork's days, especially in fuel with ethanol, were numbered. 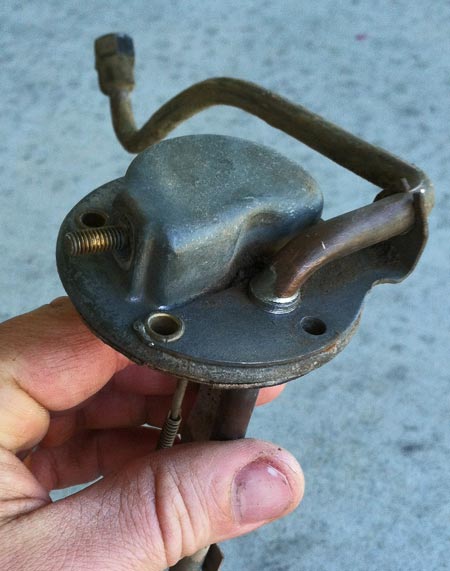 Sending unit removed from the tank. 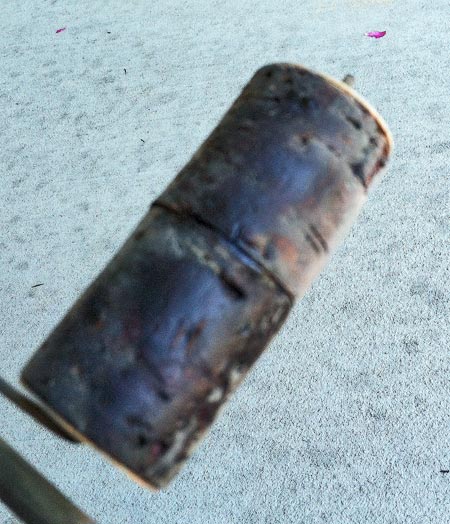 During the next few days I would spend quite a few hours scraping and brushing the tank's exterior. While the scraper would get most of the material off there would still be some remnants afterward. That is when a friend found out about my scraping and recommended an amazing solvent sold locally as "Wash Thinner" — a potent mix of acetone, lacquer thinner, MEK and other goodies. It will eat through all but the toughest of rubber gloves and, most important to me, destroy grease, paint and dirt on contact. What was taking me several minutes to clean with a scraper and brush was taking seconds with the Wash Thinner. With my new weapon in hand I had my tank down to bare metal in no time. 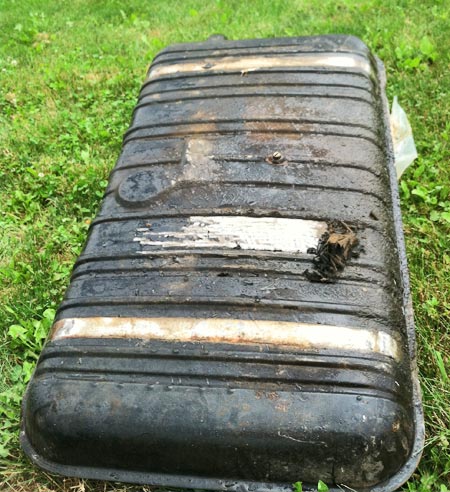 This is the underside of my tank. Lots of undercoating â€“ let the scraping begin! 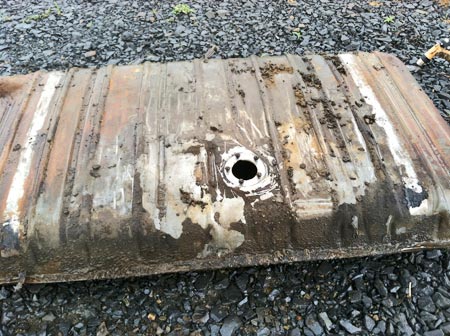 This is the top of my tank. Most of the dirt on top was simply dirt; not undercoating. 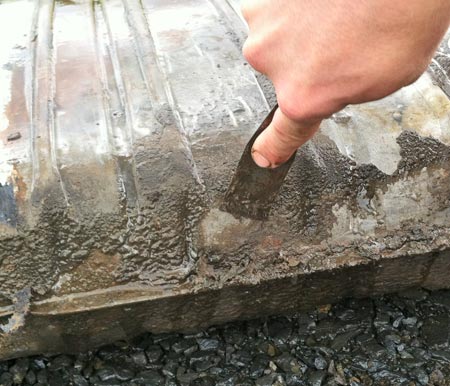 Even after scraping for a long time the undercoating left a messy surface that could not be painted. 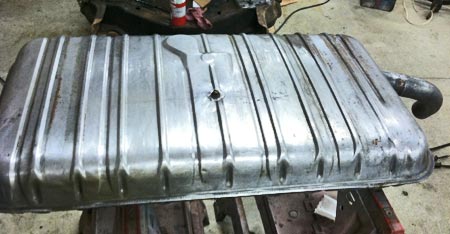 I chose to seal the inside of my fuel tank with POR-15's US Standard Fuel Tank Repair Kit. While I considered several other sealants like Red-Kote & Eastwood (it seems every company has a variety of their own), I chose POR-15's system because I used it in the past to seal tractor and motorcycle tanks and even a tank used on an experimental airplane. In short, I trusted the product and know of POR-15 sealed tanks that have held up for over 10 years.

The system is quite simple to use and the included instructions are very helpful. Your first step is to clean the inside of the tank with their Marine Clean solvent. Its really just a water based degreaser but you slosh it around the tank and then sit the tank in different positions for a couple hours. Then you dump out the first batch of Marine Clean and repeat the process a second time. As expected there is a very noticeable difference in the clarity between the first and second washes. I sealed the hole where my sending unit was with a gasket and aluminum cover and sealed the filler neck with a 2" rubber drain vent cover. 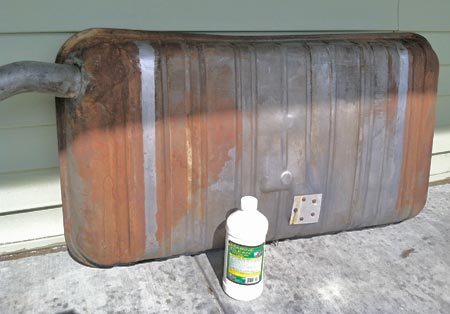 After the Marine Clean phase is finished it is time to use POR-15's Metal-Ready. This product etches the inside of the tank and is similar to the cleaning phase. You simply shake the product around in your tank and then roll the tank into different positions every 30 minutes until all sides are etched.

When you drain and rinse your Metal-Ready it is time to dry your tank. Be patient during this step and use a heat gun NOT your wife's hairdryer. I made the latter mistake when drying a motorcycle tank a few years ago and as punishment had to replace the crummy hairdryer that I burned out with the Cadillac of hairdryers. Having learned from my mistake I used a dedicated heat gun for this tank. Since I wanted to be absolutely certain the tank was dry before moving to the next step I dried the tank for 45 minutes then let the tank sit in the sun for an hour while I worked on other things. Then I broke out the heat gun and went through a second forced-air drying. This was absolute overkill but my wife & son were out of town for the weekend so I had the time. 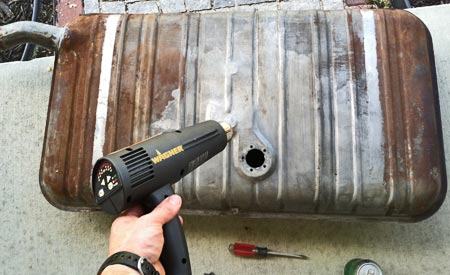 Use a dedicated heat gun NOT your wife's hairdryer!

The final chemical in the process comes in the form of the actual tank sealant. Here you simply pour in the entire can of sealant and roll the tank until everything on the inside is covered. If your tank has baffles this can be a very long and strenuous process. My tank doesn't have baffles so after flipping it around a few times and for a few minutes I was able to start draining the excess sealant. I drained the tank via the drain plug but could have used the filler neck as well.

It is important to mention that you must clean any threads that were exposed to the sealant. If you don't remove the excess you will be able to use a tap to restore your threads but this will likely produce chips and debris that could eventually clog your fuel system.

At this point I had a fuel tank with a sealed interior and a relatively clean exterior. There were several areas with surface rust so I spent a lot of time sanding the rust away by hand. I would have loved to use a grinder with a flapper disk or power sander but I didn't want to produce any sparks even with a sealed tank. Of course I kept covers on all my openings so the dust wouldn't find its way into the tank.

When the exterior of the tank was fully sanded I initially etch primed it and then topped the etch prime with two coats of Mar-Hyde Ultimate 2K primer. My top coat was Eastwood's Tank Tone; a paint that reproduces the look of bare metal. 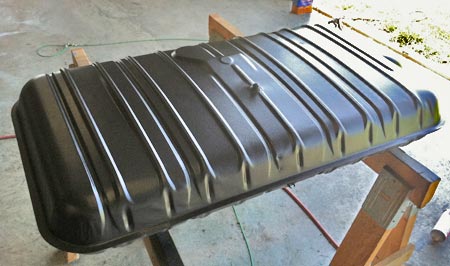 My tank with its first coat of 2K primer.

The last thing to address in this project was my sending unit. I initially bought replacement corks but wasn't happy with the way they looked as I considered their varnish coating a weak spot. Finding nitrile floats from Snyders Antique Auto Parts was the answer to my concern and they were the same size as the floats I needed. 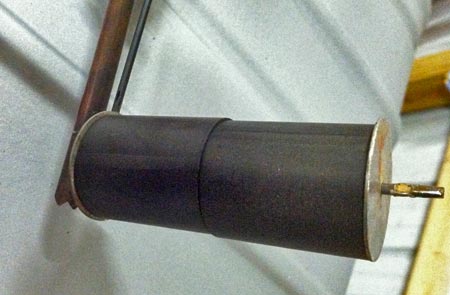 I chose to replace my original sending unit corks with nitrile floats.

When reinstalling the sending unit to my tank I added a ground wire. The sending unit originally grounded to the frame via the fuel line but I am planning on installing a fuel pump when I replace the rest of my fuel line. This fuel pump addition could interfere with my ground as it will have some rubber tube in the assembly. The wire that I added will simply be connected to a frame bolt giving me absolute certainty that the sending unit will have a proper ground. 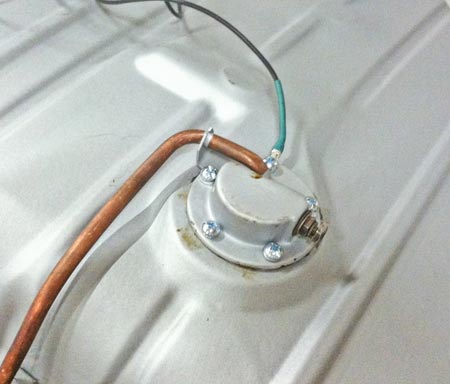 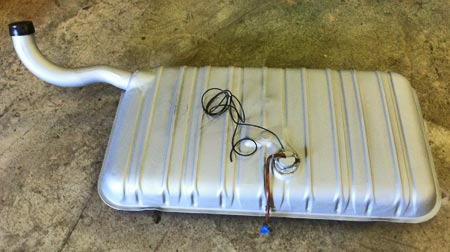 I am happy with the final result of my fuel tank restoration. I think this is another great project that virtually anyone can do so long as you can follow directions and maintain patience. Most of all, remember that the Shop Manual is always right.