I admit it, I worry a lot. I am always wondering when the next hurricane will strike, when the next extended power outage will occur and when my basement will flood again. The last thing a worrier needs while getting acquainted with their "new" 1937 Buick is to have the rear wheel fall off during a confidence-building drive. So, when it happened to me I began thinking about every nut and bolt on the car and I knew I wouldn't be able to drive the car with peace of mind unless I could inspect each important vehicle component. I made the decision to completely remove the car from service so I could clean and restore each part that needed attention. Of course I wanted to do the work myself but there would certainly be occasions where I would have to send things out to professionals. I went into the restoration thinking it would take at least two years before the car was back on the road. Sure I could take shortcuts and just replace vital bolts or components but I quickly realized it was important to do the job once and do it right the first time.

For no particular reason I decided to address the car's front suspension. General Motors introduced "Knee Action" front suspension in the mid-1930s and this is the type of front suspension my car has. There is no solid axle between the two front wheels. Instead, there is a steering linkage that connects the two wheels. The suspension features a coil spring and also a shock absorber. Wheel hubs are mounted on a steering knuckle and attach to a shock absorber arm on the top and a lower arm on the bottom. This setup produces independent front suspension and a ride that is more comfortable than a solid axle. When one wheel encounters a bump or obstacle the suspension the obstacle absorbs (like a knee) while the other side remains level. It is a nice system but there are a many parts involved and the system must be tight. 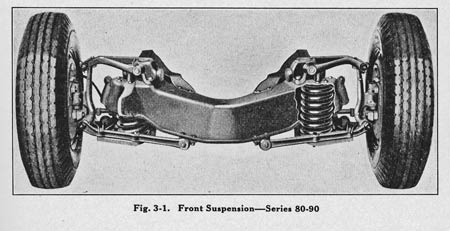 It is possible to gain access and work on the front suspension while leaving the front fenders on but I knew I would eventually need to pull the engine so I decided to remove the hood, fenders and grille. With enough help you can remove this unit, known as the front clip, as a complete assembly. When the only helper for the day is your father you need to remove each component individually. The hood came off easily but the fenders need some persuasion. 76 years of road grime, dirt and rust make nut and bolt removal a miserable task. I would start disassembly by scraping exposed threads with a wire brush and a strong treatment of Liquid Wrench. After that it was simply elbow grease and the wrench. The bolts used to hold the fender to the body are not actually bolts at all but studs with different threads on each side. One half of the stud fastens to the frame leaving the other half exposed. Presumably this was done to make the job on the assembly line move faster. With the studs, workers would have had an easy time installing the fenders. After the fenders and welting were resting on studs, workers simply placed nuts on the exposed stud. 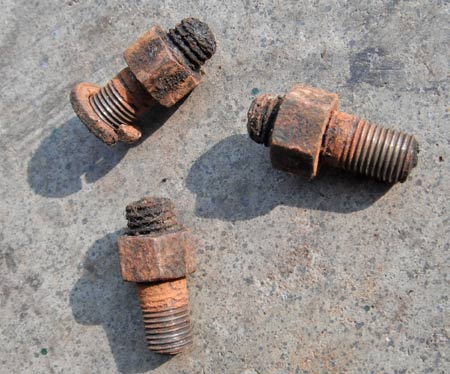 These are the studs that enter the frame and support the front fenders.

After some sweat, a stiff neck and the help of an impact driver both of my front fenders were removed and access to the suspension and engine was now granted. It was here that I found the largest amount of rust on the entire body. The design of the fender is such that it is very easy for dirt and moisture to collect in the rear most portion that meets the body. While the rust was quite ugly and noticeable with the fender removed, I quickly determined that it was not a major rust problem and well within my sheet metal skills. It's an issue that I can easily clean up before priming and painting many months down the road. 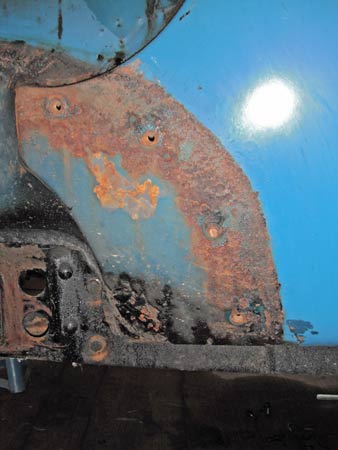 Rusty patch revealed after pulling the front fender. It shouldn't be a major problem.

With the front fenders removed, I had an unobstructed view of my front suspension. My first thought was to put the fender back on and walk slowly away. You see, it appears that throughout the car's 76 year history many of the owners were very faithful in lubricating the suspension and steering linkages. What they weren't very faithful with was cleaning excess grease, dirt and even road kill off the parts! It was really shocking to see how much crud had accumulated. In some areas on the steering knuckle assembly the grease buildup was well over an inch thick. Folks, that is a lot of buildup! In some ways this grease crud was beneficial in that it essentially sealed the part off from the elements. In other ways it was bad as it could have trapped water against metal creating excess rust. 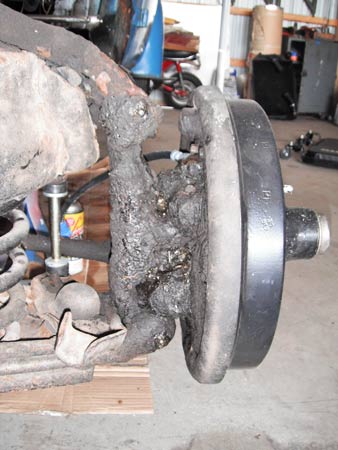 This is the incredible amount of grease I was dealing with. Compare this picture with the scraped picture to appreciate how much buildup there was. 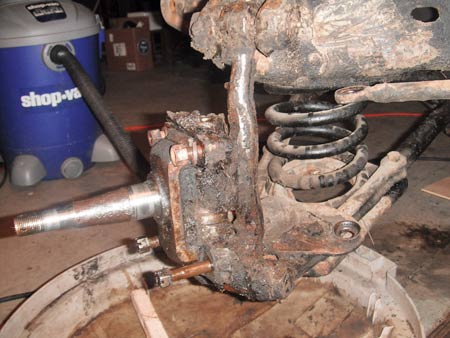 A view of the driver side assembly from the rear.

With the radio on and little to distract me, I started the slow process of excavating the front suspension from its grease and dirt tomb. It was much harder to remove than I was expecting but with enough persistence and the right chisel / putty knife / scraper / screwdriver I was able to remove the worst and see the parts as they should actually look. From here I removed the brakes, brake backing plate and front stabilizer. I was a pro at removing the front stabilizer since I had removed it just weeks earlier so I could pull and paint my engine's oil pan. 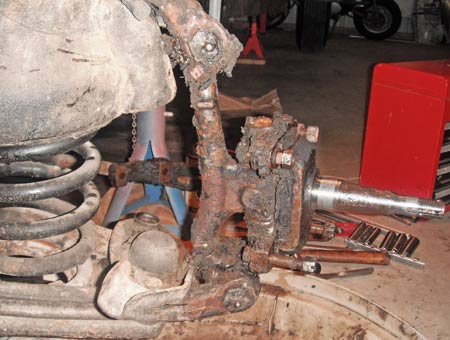 After a few hours of scraping this is what I found.

To disassemble the steering linkages I had to break out a Buick Master Parts Book. In there I found an exploded view of the linkage parts and figured out how to disassemble it. From my car's steering gear extends one arm that connects to a connecting rod. This rod then branches off to another arm that extends from an attachment point fixed onto the front frame cross member. This arm extending from the frame has tie rods extending to each wheel that turn the wheels based on steering input. 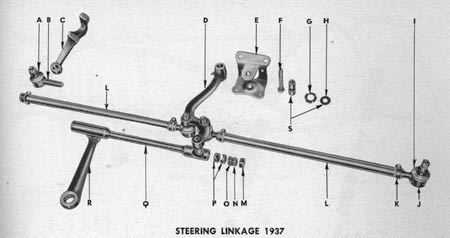 Exploded view of steering linkage from the Parts Book

For me, the only tricky part of the steering linkage removal was learning how the primary steering arm attached to the connecting rod. The steering arm has a ball at the end that is held into the connecting rod with curved seats. Loosening those seats remained a mystery until I studied the exploded view and realized I needed to scrape a little more grease! That scraping revealed a threaded cap and when that cap was removed a spring-loaded plug that kept the curved seats together could easily slide out. 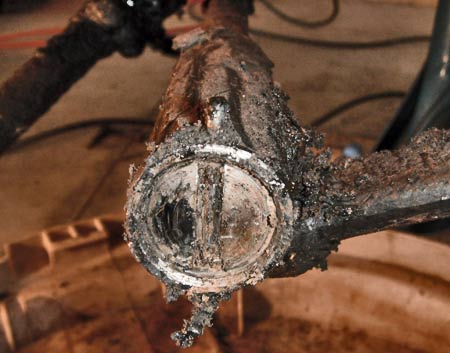 Steering arm to connecting rod. This cap had to be removed so I could pop the steering arm out of the rod. There is a cotter pin running from top to bottom to ensure that the cap will not back out.

With the steering linkages removed it was now time to disassemble the actual suspension. The coil spring for each wheel rests under tension between a recess in the frame and a bracket that stretches across the lower control arms. To remove the fittings that hold the steering knuckle on to the shock and lower control arm the coil spring must be compressed. To do this you can use a spring compressor or you can use the weight of the engine and a floor jack the way I did.

With my safety goggles on I simply placed the jack on the jack point located just in front of the coil spring. I then put enough pressure on the jack so that the spring compressed but did not lift the car. With the tension off I removed the lower outer suspension fitting and stud then SLOWLY lowered the jack. As the jack lowered the spring extended and once the jack was all the way down I slid the spring right out. I read later that this technique, while useful, can be dangerous. So...do it at your own risk! I will also state that if I had pulled the engine before I attempted this there would not have been enough weight to compress the spring. When I reinstall these springs the engine will not be in the car so I will be investing or borrowing a spring compressor.

Once the tricky coil spring was removed the steering knuckle was easy to disconnect from the shock. The shock itself was bolted onto the frame just above the coil spring. I tackled the other side of the car and before I knew it I had steering knuckles, coil springs and shocks spread out on the floor of my garage.

When inspecting my front shocks I found them to be completely empty, dry and useless. There is no way for the average guy to overhaul these old Delco shocks so I sent them out to Five Points Classic Auto Shocks in Santa Ana, CA. There they were cleaned and overhauled. It took about six weeks and cost a little over $300 for the pair. On my own I will prime and paint them and rest easy knowing that professionals did the work on a crucial suspension component and a component that is not easy or quick to reach. 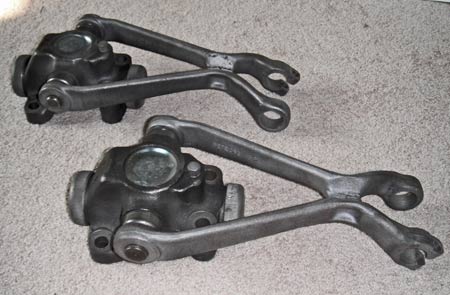 Overhauled shocks back from Five Points. So clean I can sit them on the carpet...at least when my wife doesn't know about it!