The headliner in my Buick was in relatively great shape when I got my car. It was tight as a drum, relatively little fade, and there were no rips or cuts. Unfortunately, the Buick developed a leak at some point in its 75 year history and that leak showed up as water stains just below my rear window. Without removing the headliner there would be no way of knowing where the car was leaking although I assumed the rear window was the culprit. I hated to remove the original but this was an item that I wanted to look great. 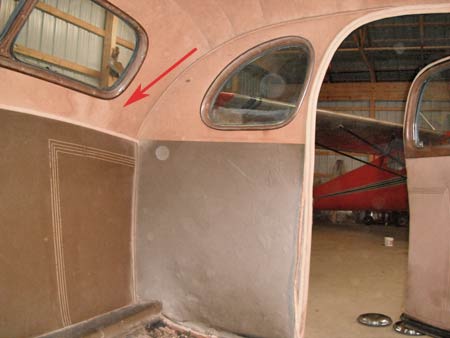 Having never replaced or modified a headliner I wasn't really sure how to proceed. In all honesty, I didn't even know how the thing hung there, seemingly by itself, since there were no hard anchor points that you can touch when poking your finger into the liner. Some research was in order before I started so I turned to the book Car Interior Restoration by Terry Boyce. Originally published in the mid-1970s with a second and third edition to follow, this book is a gold mine for anyone working on a car from the 1930s. It is still found easily on the used book market for just a few dollars.

By reading Boyce's chapter on the headliner I learned how it was attached to the car. There are several "listing wires" that pass through sleeves sewn in the back of the headliner. Then, this sleeved wire is simply pressed on to hooks that are found on metal brackets welded to the inside of the car's roof. The sleeves are almost 1/2" wide which gives the headliner that "hanging from nothing" look. The edges of the headliner are simply tacked into cork tack strips that run along each edge. Of course when you look at the edges of a 1930s headliner you don't see any tacks and this is because the edges are finally covered by products called windlace and wireon. These little strips are tacked over the headliner edges and since they have internal wire support they can be folded in half thus covering all the tacks when folded. 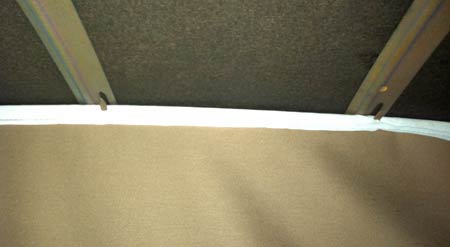 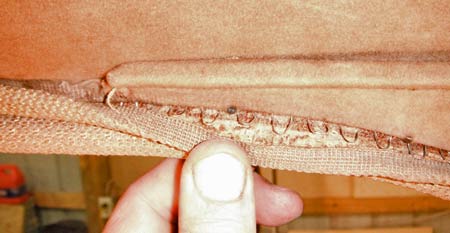 With a little bit of knowledge, I started to remove the headliner. After removing all of the windlace and tacks along the edges, I began removing the listing wires from their clips. The only way to have good access to the clips is to work from the front of the car to the rear and as I worked back I simply folded the headliner up as I went. All of the little clips bent forward for removal create quite a head-hurting hazard so be sure to use extreme caution around them or bend them back up.

My sewing skills started and ended 20 years earlier with my 8th grade Home Economics class so I decided to buy a pre-made headliner kit. Several companies sell headliner kits but most of them do not use authentic fabrics. If this isn't important to you then you can save quite a bit of money by choosing a non-authentic kit. I decided to choose an authentic color and material and purchased my kit from Lebaron Bonney in Massachusetts. The headliner kit came with the headliner itself, windlace & wireon, tacks and installation instructions.

The headliner installation is, like most things, the reverse of disassembly so I started at the rear of the car and worked my way forward. The centerline of the headliner is marked with chalk so getting your headliner centered is simple.

Unfortunately, during the installation I made a critical error. As I installed the listing wires on to their clips I simply placed them on the clips without stretching the headliner toward the edges. With at least six clips between the center and the edge there is no way to get the headliner drum tight no matter how hard you try to stretch the edges when tacking. That last tactic will just get you a nice tight liner between the last clip and the edge. For me this was a major disappointment and I didn't realize I made this mistake until my installation was complete. I tried shrinking the headliner by sitting the car in the sun and making the liner damp but the only thing I could do to truly fix the issue would be to remove the headliner and reinstall it; this time stretching it tightly between each listing wire clip. As you will read later, I would have that opportunity sooner than I expected. 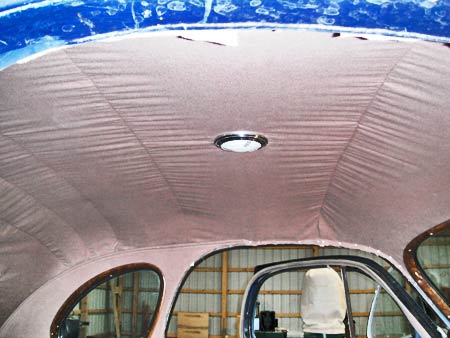 This is my improperly installed headliner. The wrinkling could have easily been removed by stretching the fabric between listing wire clips. This is completely unacceptable and a learning experience for me!

Rather than just lie and say my headliner installation went smoothly, I included my major error to illustrate the simple fact that if you've never tackled a project before you are going to make mistakes (unless you pay someone to do the work for you) and the only thing you can do is learn from those mistakes, do your best to fix them, and spread the word to others so they don't make your mistake. Fortunately re-stretching the headliner is a relatively simple fix since the listing sleeve wasn't damaged or destroyed.

A few months before I started the headliner project I reupholstered my seats. When I bought the car the drivers side seat back was badly torn and the main bench seat was ripped, tattered and had more than one mouse family living in it. I slowly started removing the fabric, padding and material and took over 100 photographs of the disassembly. These photos would come in very handy when it was time to install the new seat covers. 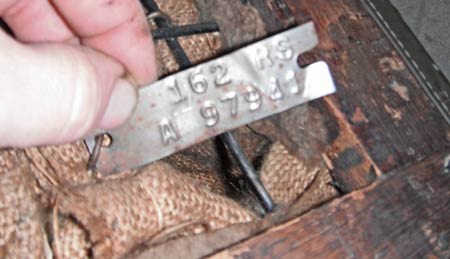 I found what is presumably an inspection tag inside my seat when I removed the fabric and padding. 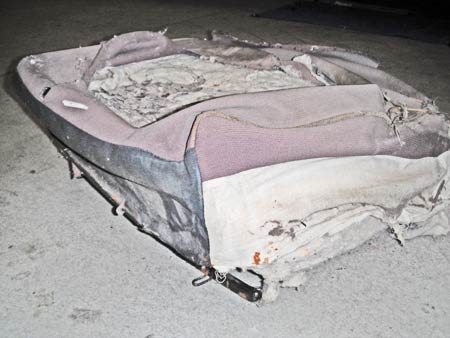 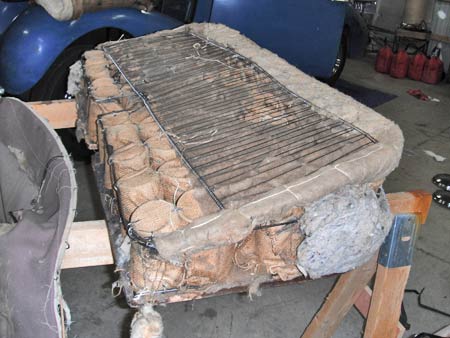 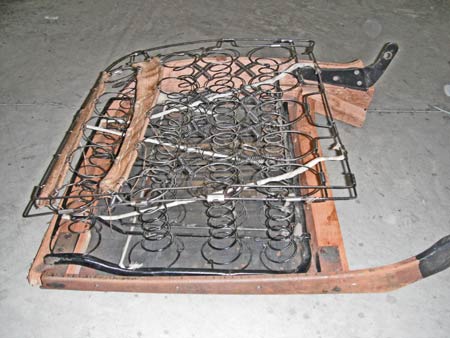 The seat covers I bought were sewn by a local upholsterer using authentic Bedford Cord and vinyl material that I purchased through Lebaron Bonney. Padding, burlap, hog rings and hog ring pliers were also purchased at the same time. Again, if authenticity isn't your primary concern you can save a lot of money by selecting non-authentic fabrics. Lebaron Bonney has several videos online regarding proper installation of seat covers. I used those videos, my original photographs and the Boyce book to install my covers and I was very proud of the work I did. 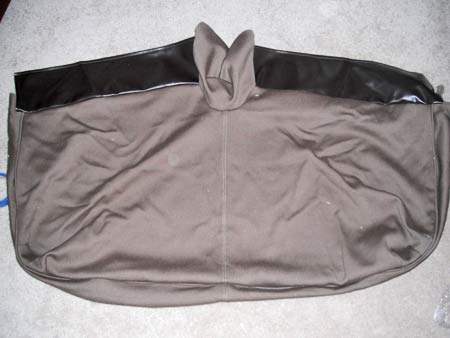 New seat covers back from the upholstery shop. 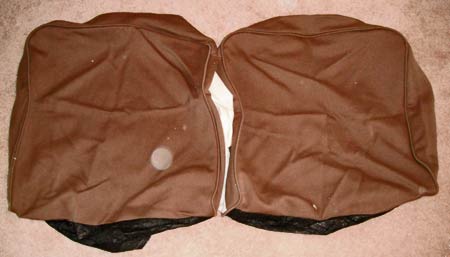 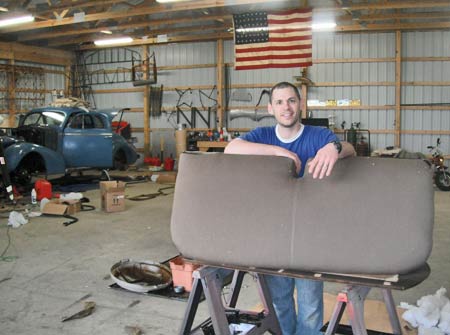 Proud of my finished bench seat. Not proud of my workshop clutter!

About the time I finished my seats and (incorrectly) installed my headliner I was starting to build confidence in my car. As you may have read in previous journal entries, I had recently gotten the car to run after nearly twenty years of sitting. I had new tires, brakes, and a wiring harness, but I was still only taking trips around the block. I started working up from 5 mile trips to 10 miles. From there I moved on to 20 miles and by the fall I was ready for a 40 mile trip.

This 40 mile trip was something special because my wife and I had just learned that she was pregnant with our first child! She was only 5 weeks pregnant and my first thought was "there aren't any seat belts for her." After some back and forth I agreed that nothing could possibly go wrong so I piled my wife, dog, and unborn child into the car for a drive.

The drive started out quite nicely; it was autumn and the leaves were starting to change. We ambled around some back roads for a while and when we were about 20 miles away it was time to turn around. We were stopped at a traffic light but then made a turn on to our return road. About 1/4-mile from the traffic light the car started making a thumping noise and I told my wife I thought we had a flat tire. As I finished my sentence and started looking for a place to pull over there was a tremendous BANG that sounded like a shotgun blast. I assumed the tire exploded and my thoughts quickly flashed to thoughts of an image of a burning antique car that I recently saw online. That particular driver got a flat and sparks from his wheel ignited his gas tank and his car was lost because he didn't have a fire extinguisher. I did have a fire extinguisher but before I could get the car stopped there were plenty of thoughts running through my mind ranging from fire to the car rolling over to my unborn child! 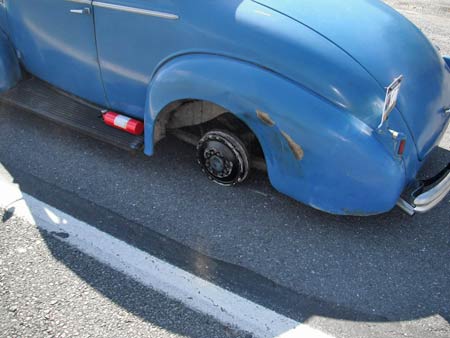 When I finally got the car stopped I jumped out with my extinguisher expecting the worst. As I aimed the extinguisher I saw there was no fire but there was also no wheel! With a quick look up the road I saw my tire bouncing toward me! I couldn't believe what I was seeing and couldn't understand how all of the lug bolts came out at the same time. If just one or two worked their way out wouldn't I have heard them rattling in my hub cap when I pulled out from the stop light? Did the bolts loosen when the fresh wheel paint & primer chipped during initial installation creating a void that would only reveal itself when those chips worked themselves free? I didn't know then and I still can't be certain now what exactly happened. Either way it was my fault for not doing an adequate inspection before the drive and not checking my lug bolts properly. Then again, who checks the torque on their lug bolts?

Although my blood pressure and heart rate probably set new personal records, nobody was hurt and my AAA coverage got my car back to my house safely within an hour of the incident. The car received some dents on the fender but beyond that the only thing I lost was a lot of confidence and the old lug bolts. A passerby even returned the hubcap.

After this incident and my poorly installed headliner experience I thought I may be rushing the project and addressing things in the wrong order. Rather than make things pretty, I needed to make sure they were safe. From there my Buick would be put in the garage and a new approach would begin where a complete disassembly would occur, I would pull and overhaul the engine and every component from shock absorbers to glass would be checked for safety and repaired, replaced or overhauled as needed. Oh yeah, I would also install that headliner the right way once and for all.