Where have you been? In my last entry I invited you to hang out in my garage on Tuesday evenings but no one has shown up yet! If you remember, I was suffering from a dose of burnout and decided to set aside a block of time each week to get back into the project. While I haven't worked on the Buick each Tuesday, I have managed to get out and organize the boxes, fool around with an old South Bend lathe that I recently purchased and tackled some general woodworking. While I wasn't working on the Buick each Tuesday night, just being around the car managed to reenergize my spirit and, in mid-July, I was able to carve out some vacation time exclusively for the car.

The first order of business was to tackle the color sanding on the '37 Buick's body. This was the third time that I painted the body (see earlier posts for a detailed explanation why) and, quite frankly, I was determined to not paint it a fourth time! During color sanding I had to eliminate the orange peel in the paint but be careful not to sand through the color into the primer. To do this I selected 1500 grit sandpaper since I found 1000 grit and even 1200 grit paper to be too aggressive. With a bucket of soapy water, a hose to rinse the car and some Merle Haggard tunes on the radio, I began the long dance of sanding, sanding and sanding some more. When the surface felt smooth and I thought I was finished, I sanded some more. The car body was washed with plenty of soapy water and when it dried, what remained was a smooth but dull finish.

The first time I color sanded something and left the dull finish I was horrified, thinking I had totally ruined the paint job. However, with the help of a variable speed buffer, a new wool pad and some 3M Perfect-It rubbing compound, I was able to bring out a near mirror finish. To do this I simply sprayed the area to be buffed lightly with water mist, applied some compound to the metal and began buffing on setting 3. I have no idea how many RPMs this translated to but my buffer has 10 settings. I used the water mist because I was told that it would prevent any swirl marks from remaining on the surface. Later, I will hand buff the body again with an even finer compound but finishing this stage has allowed me to move forward with the reinstallation of the engine and suspension components. In retrospect I wish I had taken more pictures during the color sanding process but I was covered in water and once you get arms-deep in a miserable task like color sanding it is best to continue until you are finished or else you might not finish at all!

Before the engine could go back into the car it needed paint. After a light coat of etch primer I applied Bill Hirsch engine enamel. As you probably already know, Hirsch produces engine paint in authentic, factory original colors for dozens of antique vehicles. The paint can be brushed or sprayed and it is very easy to work with. My engine was painted its proper color, a deep beautiful green similar to holly bush leaves or Christmas tree needles.

The '37 Buick Special engine has four mounting points. The front two rest flat on the right and left side of the engine frame. The rear, however, is sort of suspended in the middle of the frame using vulcanized triangular mounts that are attached to the engine block. These mounts are in turn mounted to the frame by four bolts extending from the outside of the frame into the center area.

I rolled out my engine hoist and attached it to the engine, then lifted it a few inches so I could attach the rear mounts to the block. From here I slowly wheeled the assembly over to the car, said a few prayers, and started raising the engine. My frame and body are resting on four jack stands, two 10X10 blocks at the very rear and one 10X10 block up front about 1" under the frame "just in case." My biggest fear here was rocking or bumping the car and having it fall to the ground. I think if that happened I would just throw a sheet over the whole mess and forget about the car forever!

In spite of my worries, now was the best time to do this job. No fenders to dent and lift over, no transmission to add extra weight and nothing installed on the firewall or frame to get tangled up on. With the engine at an adequate height I wheeled it into place . . . sort of. My jack stands were in the way of my hoist legs so I had to move the jack stands around. Then I wheeled the engine over, lowered it a bit so the rear mounts would go between the frame. The whole frame shook a bit and I could see that my boom wasn't long enough to get the engine into the right position! I pulled the whole assembly out again and regrouped. 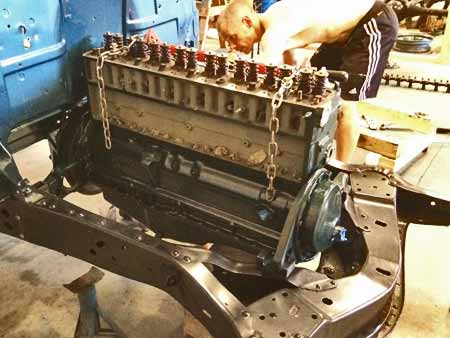 Repositioning jack stands back to their original locations after the engine was installed. 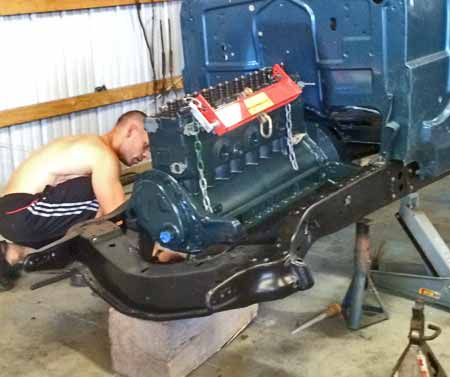 The frame is almost back down on the jack stands.

My engine hoist is rated as a 2-Ton hoist. However, that rating only applies when the boom is in its shortest position. My first attempts were in the 1/2 ton position. My engine is heavy and with fluids, accessories and the transmission attached it weighs well over 800 pounds. I didn't have any fluids, accessories or transmission and I am guessing the whole thing weighed around 500 pounds. To get the engine into place I would need to extend the boom to its longest position which happens to be rated at 500 pounds. Did you just hear me gulp?

I got the engine out with this same hoist so if it was good enough then it would be good enough now. I extended the boom, started raising the engine and I swear I could see the boom bending. I didn't wait long to admire the bend, but wrestled the block into position and made the final adjustments with a pry bar. From here I could insert the eight rear bolts, lower the front mounts onto the frame and breathe a big sigh of relief. This job was not fun solo or in 90 degree heat but my wife did stop by just in time to snap a few pictures of the final moments. I can't tell you how happy I was to see the engine in place after nearly 2-1/2 years! I snapped a few more pictures of the engine myself and called it a day. 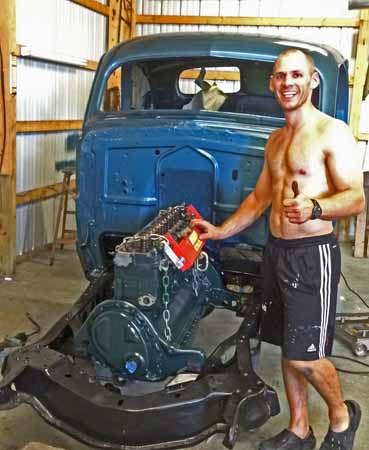 Engine in place and a sigh of relief and big smile come out. 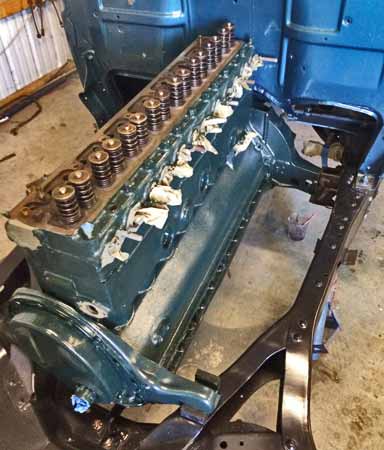 Not long after the engine was in place I realized it was time to make some more progress. While my jack stands and blocks are providing adequate support, I really want to get my wheels and tires installed just in case my "just in case" fails. To do that it was time to reinstall my front suspension system. That system includes lever action shocks, a coil spring and an upper and lower control arm for each side. In between the control arm rides the king pin with the axle protruding from there. 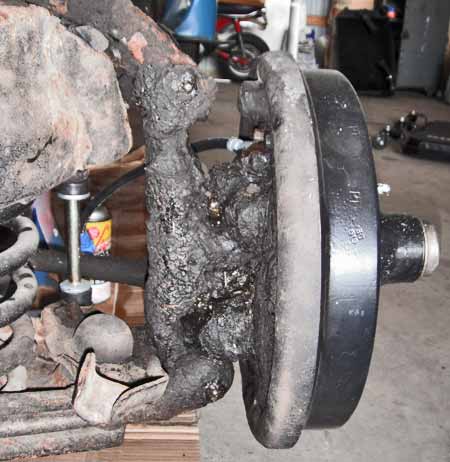 A reminder just how bad my front suspension looked when I got the car.

The suspension parts were painted long ago and had gathered plenty of dust. I pulled them out, consulted disassembly pictures and manuals and tracked down new hardware and pin kits for the upper and lower outer arms. 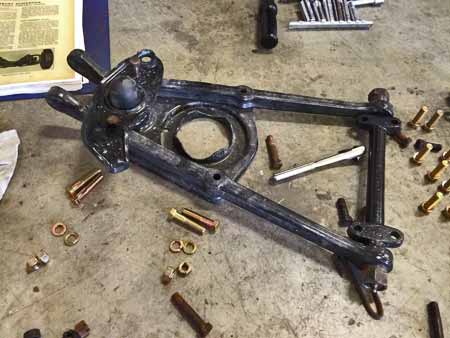 New hardware mixes with the old as I figure out how this all goes back together.

I started with the passenger side and started assembling the lower arm. The pins are threaded in various direction and it takes some studying to figure out how things go back together. Actually it took me six attempts to get things back together properly but hey, who's counting!? When the lower arm was installed I inserted the spring into its proper place and then, using ratchet straps and a jack, I was able to compress the spring enough to line up the upper arm pin. 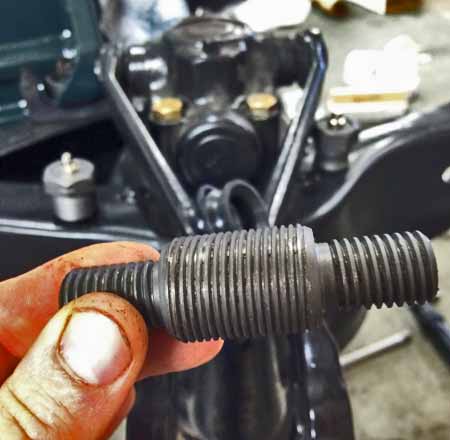 This is the upper outer control arm pin. Note the center is left-hand thread while the ends are each right hand thread. 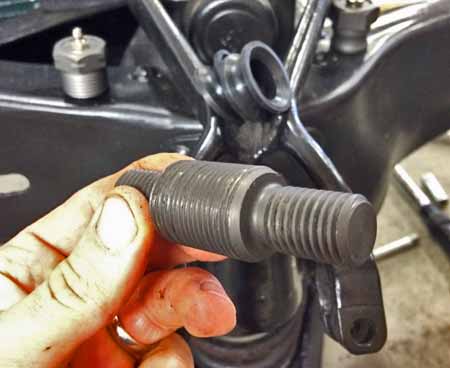 This shows the forward end of the control arm pin. Note the dust seals resting on the shock absorber arm. 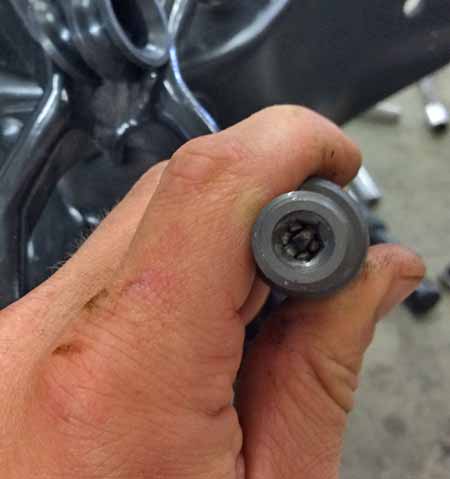 The control arm pin was installed using an Allen wrench. 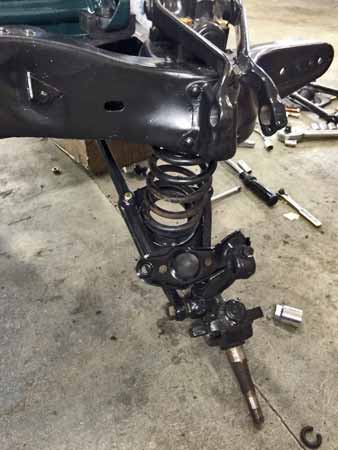 Passenger side front suspension; time to compress the coil spring. 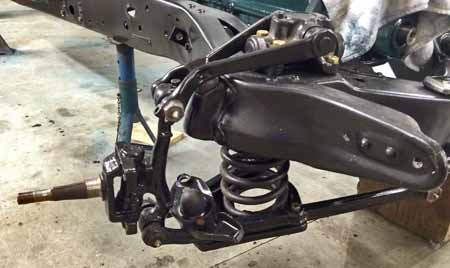 Passenger side is complete! 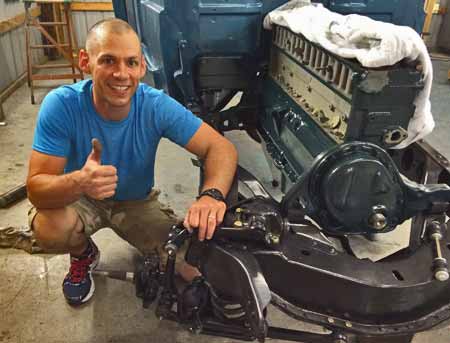 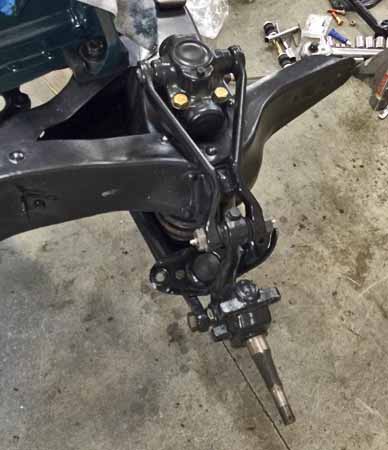 Just like the lower pin, the upper pin is threaded in an interesting way. The pin itself includes an Allen socket on one end that is used to insert and extract the pin. After studying, tinkering and cursing, the method I found success with saw me installing dust seals then clamping the main pin in place using the clamp built into the king pin. From here, the forward cap can be threaded on (it only has inner threads) and then the rear cap can be threaded on as well (it has inner AND outer threads). After the caps are on I released the tension in the jack and ratchet straps and subsequently released a huge smile too. It took me nearly three hours to assemble the passenger side suspension but, with added experience, I had the driver side back together in under an hour. 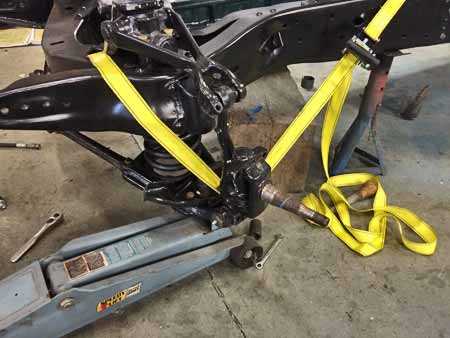 The ratchet strap was used primarily as a safety. The floor jack did the heavy lifting. 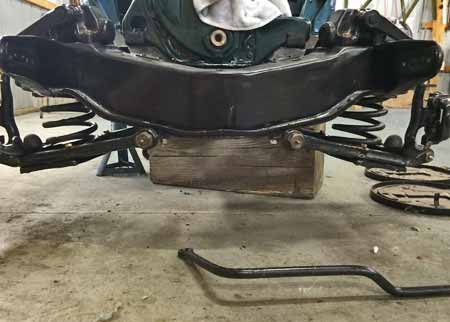 Both sides are finished. 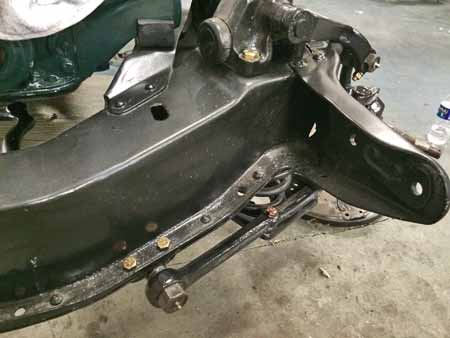 Top view of the driver side suspension. 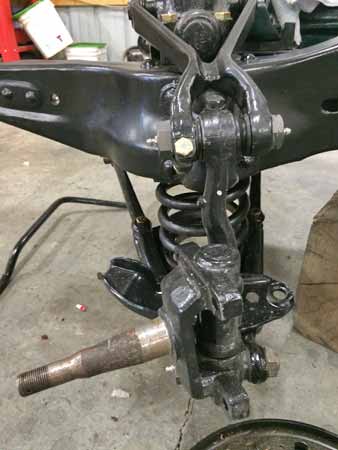 Side view of king pin — so clean! 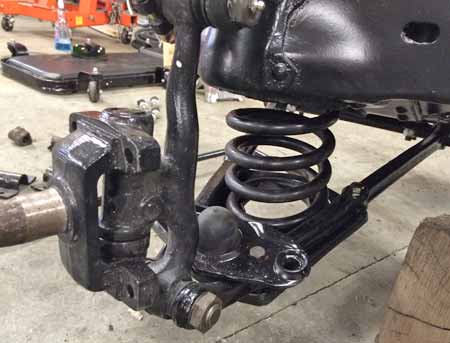 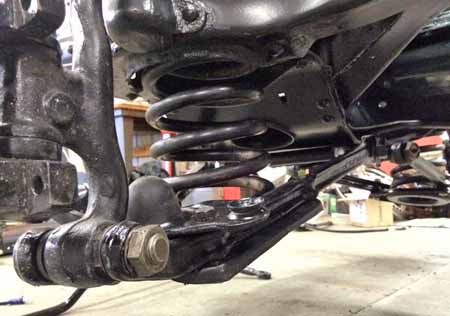 With the front suspension complete it is now time to install the stabilizer and steering linkage.

It's amazing what a little progress will do for morale and enthusiasm for a project. I went from being totally burnt out to thinking about the car 24/7 again. My next task is to add the steering arms and then tackle my transmission. I've sent my water pump out for rebuild and will be taking my radiator to a local shop for inspection very soon. I still have plans of starting my Buick before Thanksgiving and it looks like my current pace just might make that plan a reality. Now it's time to keep on tinkering!