I finally made a trip to a local plating shop for an estimate to redo my chrome. Thankfully, many of the trim pieces on my car are stainless steel but the chrome pieces I want to have redone include the trim around my two vent panes, two vent pane to main glass pillars, front and rear bumpers and four bumper guards.

Before I could make the trip, however, I had to remove the glass from the window vents and dismantle the two pillars. According to the '37 Buick Shop Manual, the glass in the front vents can simply be slid out of the frame since all that holds them in place is some friction tape. While that may have been good instruction 77 years ago, decades and decades of thermo cycling, direct sunlight and general age turned that friction tape into cement. To soften the tape I had to soak the windows in gasoline ... for three days. On the third day I liberated the glass by placing it in a large vise and gently persuading the trim off. The original panes will be replaced with new glass since one pane was already cracked when I got the car. 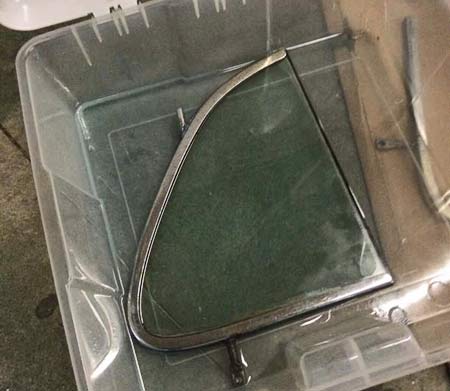 Glass and frame are soaked in aviation gasoline. 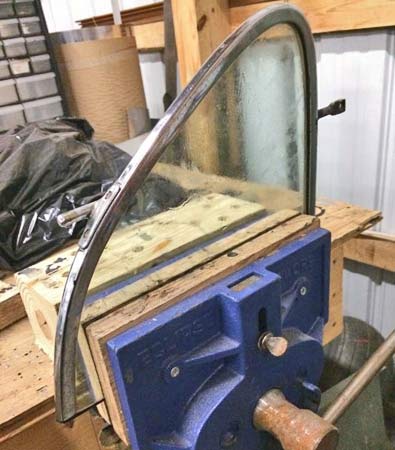 With the glass clamped it was time to persuade the frame to release. 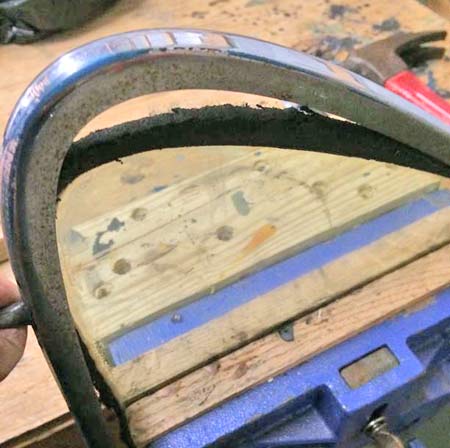 As the glass is released we get our first glimpse at the original friction tape. 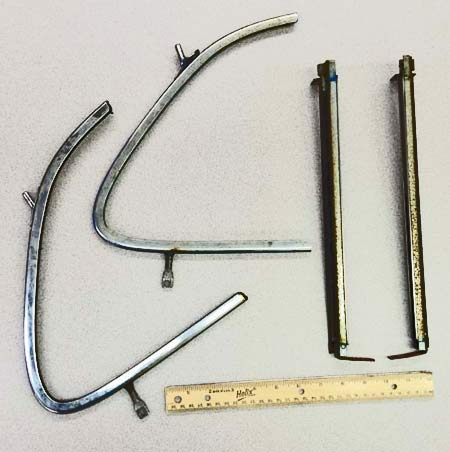 These are the smaller pieces that were sent to Qual Krom.

The vent-to-main glass pillar is the piece of metal that divides the main glass from the vent. It is critical since it creates a seal for the vent but also serves as the channel where the main glass rides in. There is even a piece of woodgrained trim visible on the inside of the car. This piece had a bit more going on, so I took dozens of pictures to make sure that once I took everything apart I would be able to get it back together. Disassembly required me to remove a support bracket, window channel and a metal trim clamp. From here the woodgrained metal piece simply slid off revealing the bare pillar and the 1/2" X 13-1/2" face that needs to be rechromed. 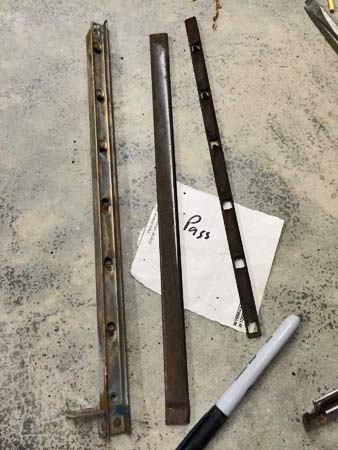 This shows a close up of the pillar, woodgrained strip and retaining clamp.

With my pieces prepped, it was off to the plater for my estimate. This was the first time I was getting chrome work done for myself. I knew it would be expensive and I was hoping to get everything done for $1,200. Boy was I off! As my parts lay on the estimate table the "$150 here" and "$300 there" really started to add up. It wasn't long before my estimate totaled $2600. I managed a smile and said I had to think about it. Then I slowly backed out of the door.

I made several phone calls and sent emails advice and my auto restoration friend Rick came to the rescue. Do the bumpers locally and ship the small pieces up to a smaller company in Erie, PA called Qual Krom. I took Rick's suggestion and shipped everything up for inspection and I am very pleased with the estimate. While the local shop would charge me over $1,500 for the smaller, non-bumper items, Qual Krom's price is less than 1/3 of that!!! Now I know what you are thinking — cheap chrome is cheap chrome and won't last but I know for a fact that Qual Krom material is incredibly high quality and used on many AACA award-winning restorations. I also know that the "local company" is known for incredibly high prices. I will use them for my bumpers and bumper guards but I've decided to wait to have those done since I won't need them until the last minute. I will keep you posted on the chrome. Once it is back it will be time to reassemble the doors!

To get the front two tires back on the car, I have to turn my attention to the front suspension. The parts are covered in 77 years of grease and dirt and all of that crud needs to come off before applying new paint. This would require tremendous patience as I sit and scrub and rub and scrape, etc. It is no wonder why I've pushed this job off for three years. With the prospect of having to do all of this cleaning by hand, I got smart and called the local engine shop. They agreed to hot tank all of the pieces and before they could change their mind I rounded up and delivered all of my front suspension parts, transmission support bar, bell housing, the sheet metal bits of my engine and even my torque tube to transmission seal. Less than 24 hours later I got a call that my parts were done! 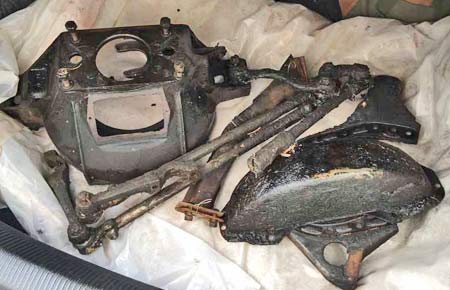 Some majorly greasy parts getting ready for delivery to the hot tank. 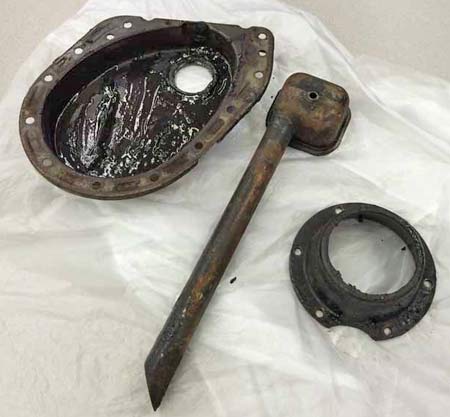 A few more nasty parts ready for the hot tank.

When I showed up to the shop and the laborer delivered the parts to the waiting area it was hard to contain my excitement. I could see bare metal ... and tie-rod threads ... and casting numbers ... and BARE METAL!!!!! My bill was $53 and it was easily the best $53 I've spent on my Buick. Had I tackled this myself it would have taken a week and the parts would have only been "sorta clean". This was fantastic. 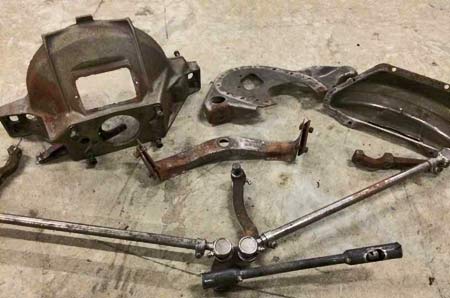 Fresh out of the hot tank it is time to prep, prime and paint!

I sent the control linkages to the hot tank assembled. Before disassembly I snapped a few images for reassembly later. 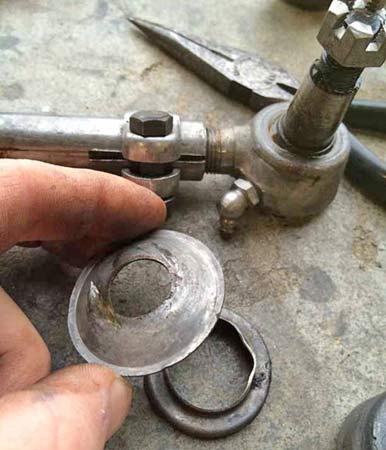 These washers ride over rubber bushings. 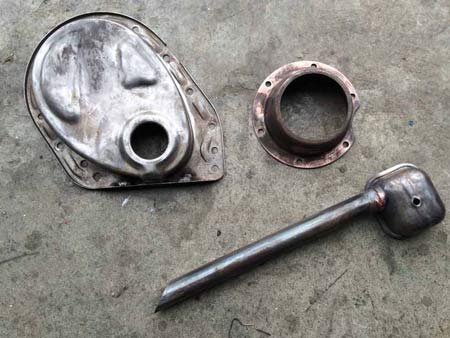 While the hot tank stripped all of the grease, paint and other contaminants off I was still left to deal with some rust. So, before spraying primer, I grabbed a wire brush attachment and installed it on my angle grinder and went to town.

As I didn't want to paint the front suspension as a whole unit I completely disassembled everything (taking tons of photos of course!) then I cleaned everything with lacquer thinner and then some "final wash". From here I applied Five Star Etch Prime to everything followed by black MarHyde 2K primer. While I was still in the painting mood I sprayed the suspension pieces with Eastwood's Extreme Chassis Black. 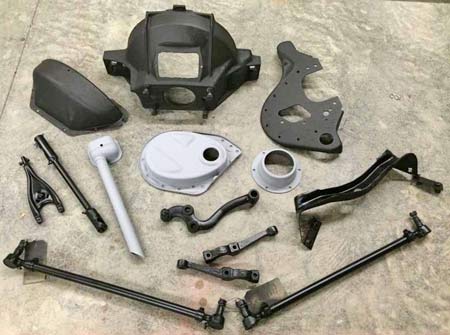 Engine parts in remain in prime while all steering components and transmission mount are in final paint.

Overall I am thrilled with how everything turned out. The engine components will be painted before final engine assembly but for now they are resting comfortably on my home gym — lord knows that gym makes a better parts rack than exercise equipment. My next step with the front suspension will be reassembly. As soon as I order new rubber and a center link pivot bushing I will be doing just that. It will feel great to start putting things back together!

Now is probably a good time to tell you about a little something that happened this past weekend. I've probably said about eight swear words in front of my dad my entire life. That isn't to say that I don't swear because I have a limited vocabulary and fill gaps with colorful language. In fact I swear enough that my 2-1/2 year old son says "Dammit!" all too regularly. Perhaps I am afraid (at age 35!!) that the Old Man will still crack me across the mouth or, perhaps, it is out of respect. At any rate, all of that changed this past Sunday when I had an adult version of a temper tantrum. While working on an undisclosed Buick project things weren't going perfectly. They weren't going poorly but they weren't perfect.

I hate not knowing how to do things and my stress level rose as an easy remedy wasn't at hand. Then I blew up. Not at my dad of course, just a venting of general frustrations that have been building for some time. "THIS — censored — CAR IS GOING TO BE A PILE OF — censored — !!!" "WHAT A WASTE OF — censored — TIME AND MONEY!!" and, of course, " — censored — !!!!!!!!" My dad, being one hell of a dad, did his best and did not burst out laughing. He didn't point out that I was acting like my two-year-old son. He didn't even smack me in the mouth for swearing. Instead he came up with some great "Dad-isms" and said "Buddy, most people start working on cars by sweeping floors in a shop. You are tackling a whole car." I hate when dads are right.

So why do I include this as the ending to my entry? Simple. If I wrote every time about how great things were going I would be lying. If I wrote about every project and never talked about my frustrations then I would be disingenuous. Perhaps you've been in a similar situation so you know exactly how that ball of stress inside your body has to come out as a slew of curse words or by losing hair. I, unfortunately, don't have much more hair to lose.

I am first and foremost an automotive reference librarian. I do not restore cars for a living and restoration work is incredibly difficult. I've said it before — if you are paying or have paid someone to restore your car, stop whatever you are doing and go thank them. If you are in the same boat that I am and doing the work yourself (blow ups included) then go thank your dad for not telling you that you are a jerk when you are acting like one. 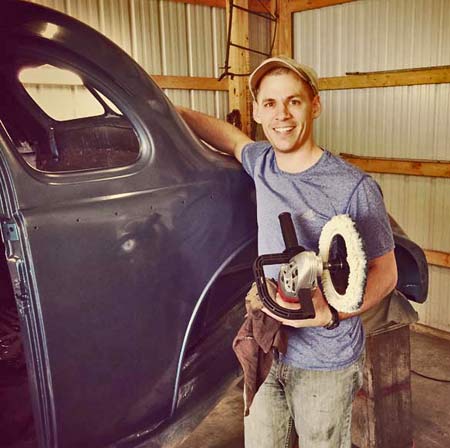 A relatively recent shot of me with the Buick.

I needed a little perspective on how far my car has come since I started working on it. Sure there is a ton of work that needs to be done but it's already come a long way. At times I am frustrated but I am proud of my car and what I've done.