So...where were we? When we last had a chance to chat I had finished priming my doors and I was turning my attention to the body of my coupe. A lot of work has taken place during the last month. A lot.

Before we proceed, go send the person who did your car's body and paint prep work a thank you note. Go ahead; I will wait. If you did your own work go drink three beers. Why? Because, quite simply, paint stripping, body work and paint prep sucks. It sucks big time. Many hours are spent cleaning, sanding, sanding, sanding and sanding some more. Many shirts were ruined, respirator filters clogged and little tiny bits of metal have embedded into your skin. If you were able to pay someone to do the job for you, it was worth it. Whatever you paid, it was worth it!

Enough whining from me, let me tell you about my last month in the garage. My paint removal process is essentially a three-step procedure. First, I use chemical paint stripper. The product I use was nothing unusual, just a Klean-Strip gel product that I brush on. The first application removed the most recent layer of light blue paint and some of my car's original darker blue paint. A second (and sometimes third) application removed any remaining original paint and most of my car's original black primer. 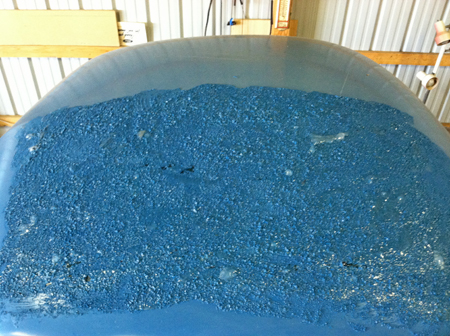 Paint stripping begins on the roof.

I was actually surprised to learn that the original primer was black. For some reason I assumed it would have been maroon primer. I can't really say why I thought it would be maroon but it made me happy that the original stuff was black since that is what color I will be using. I wonder if Buicks painted lighter colors had different color primers? Probably not since the bodies were built on a production line.

After my chemical stripping, plenty of residual paint and primer remained. This was removed with a pneumatically powered bristle disk. My compressor, an oil free 33-gallon Craftsman unit, could barely keep up. Oh how I would love a new compressor! 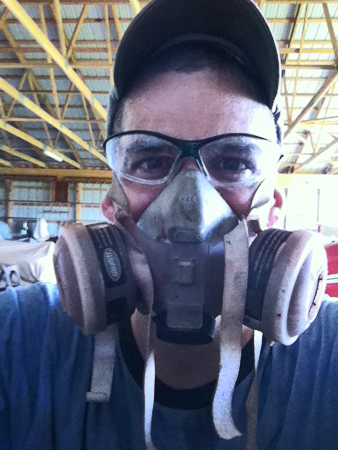 Protect yourself while sanding!

With all of the paint off of the body it was time to smooth the metal out with 180-grit sandpaper and my dual-action sander. The bristle disk can leave circular swirls similar to the appearance of engine-turned metal so the dual-action sander evens out that circular appearance. The 180-grit paper also gives the proper amount of "tooth" needed on areas needing body filler. 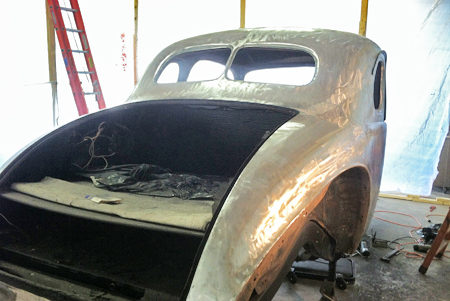 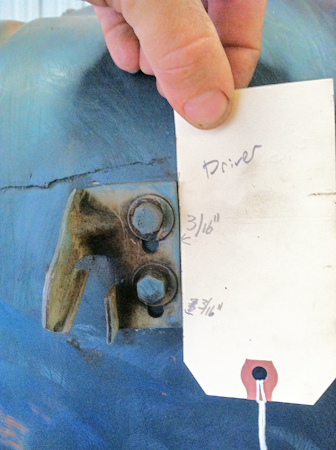 My notes for reinstalling the hood latches to the body. What are the odds of me lining everything up the first try?

On my car there were a few areas that needed some extra metal attention. The first was the rear end area just below the trunk lid opening. The second area that needed some smoothing was just above the driver's rear wheel well. Both of these zones had clearly been involved in minor incidents throughout the years — probably when loading and unloading the trunk. I went to work with the hammer and dolly and then needed to apply some body filler to make things perfectly smooth. In addition to the two areas mentioned above the car also needed attention under the body trim strips, leaded seams where the roof was originally attached, and some minor dents here and there.

Many years ago, when I first used body filler, I learned a valuable lesson. I purchased a small 6-oz container that came with a small packet of hardener. I assumed that if I used the whole container of filler I could also use the whole packet of hardener. Wrong! After mixing that concoction my filler turned from putty to rock in about 30 seconds. It was also very HOT due to the chemical reaction. Lesson learned!

With knowledge gained years earlier I properly mixed my filler and made my initial application. Then, after it hardened, I sanded down the high spots and filled the low areas with newly mixed filler. This sanding/filling procedure was repeated until the metal was perfectly smooth. I used 60-grit sandpaper to attack most of the filler and then feathered it with 180-grit. 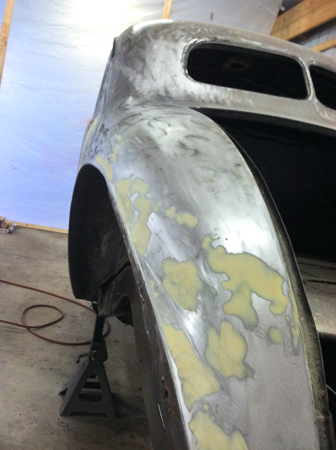 Some of the rear fender body work mid-sanding. 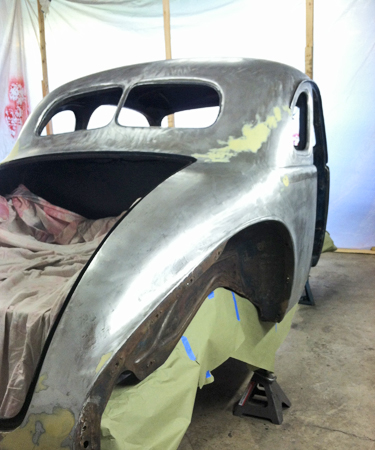 The leaded seam and rear bumper receive some filler too.

After I was satisfied with the filler work I sanded the car again with 180-grit paper and finally 320-grit paper. The body was washed and dried twice and then ready for Five Star etch prime. On top of this went the same black Marhyde 2K primer I used on the doors. 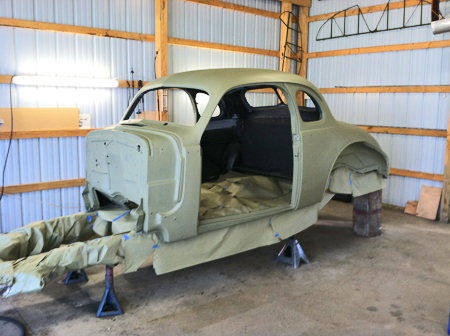 The "Old Girl" in etch prime. 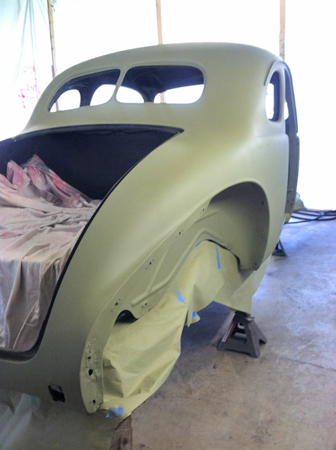 Rear view of the body in etch prime.

The 2K primer can be sanded within 45 minutes but I let the body sit for 48 hours before doing anything else. I'm not running a body shop so while I could sand sooner it makes better sense for me to let the primer fully cure. After 48 hours I block sanded (by hand) the black primer with more 180-grit paper. This revealed some low spots that I could have addressed with more filler but the low spots that I found were minor and would be filled with a second application of 2K primer. That stuff fills very nicely! 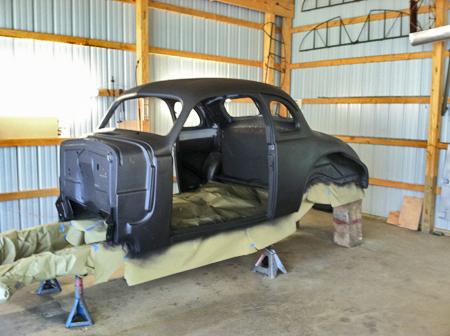 The "Old Girl" is starting to look young again with a fresh coat of 2K primer!

After the second application of 2K primer I was quite proud of my work and really changed my outlook on the project. Since the body is so big and the metal finally looks uniform and good it makes me feel like a lot has been accomplished so far.

Those feelings of accomplishment were rather short lived however because I had to turn my attention to the fenders. My favorite part of late 1930s cars are the big pontoon fenders. They create a wonderful art deco look, but, after stripping and prepping all four fenders I can tell you that there is a lot of surface area on those fenders!! 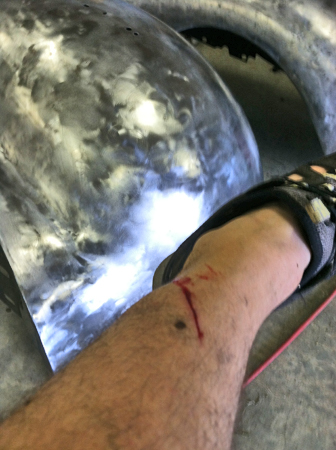 After grinding and sanding the fenders they decided to strike back. I should rub some of the car's grease or oil in that wound for sentimentality. I won't though out of common sense. 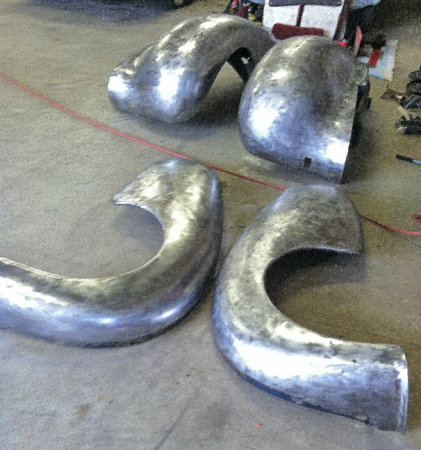 All four fenders are ready for the dual-action sander then work on some dents.

I'm not too concerned with the smoothness of the underside of my fenders because I plan on applying Rocker Schutz to the underside of the fenders and wheel wells. Sure, it won't be factory original but I plan on driving my car quite a bit when it is finished. Rocker Schutz, a 3M product, turns rock hard and will give these areas excellent protection against dirt, rocks, water and any other hazard my wheels may pick up and throw at them. In my next entry I will bring you up to speed on the metal work my fenders will need and also applying primer and the Rocker Schutz.

It is getting hot and humid now in Pennsylvania so my ideal spraying temperatures are getting limited. It is also less fun sanding and grinding in the weather. I've shed a lot of sweat on the Buick and even some blood too. One of the front fenders "bit" me while I was carrying it outside for sanding. Now the project has some blood and plenty of sweat.... I will save the tears for my first ride after she is all back together.