The weather in Pennsylvania is still extremely cold so working out in the garage is still a challenging proposition for me here in February. Work could be done, but much of the work that my '37 Buick needs now requires warmer weather. For this journal entry I would like to explain how I removed and refurbished my car's rear axle & torque tube last September and also show you the recent overhaul work I did on my car's horns in the comfort of my basement.

With hopes of painting the body of my Buick in the summer of 2014, I knew at some point I would have to remove my car's rear axle, torque tube and suspension. The nice weather of September 2013 gave me that opportunity. Having pulled my engine months earlier, I just needed to remove the Buick's transmission before I could get to remove all of the goodies in the back end of the car.

Transmission removal was a piece of cake with the engine out since I could stand inside the frame where the engine once rested. After removing the shifter, single frame mounting bolt and four more bolts attaching the transmission to the torque tube the unit slid right out. Eventually I will degrease and clean the transmission case and also open the case for inspection but, for the time being, the transmission rests comfortably in the corner of the garage. 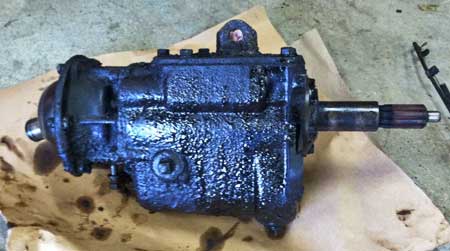 Here lies my transmission. It is pretty dirty! 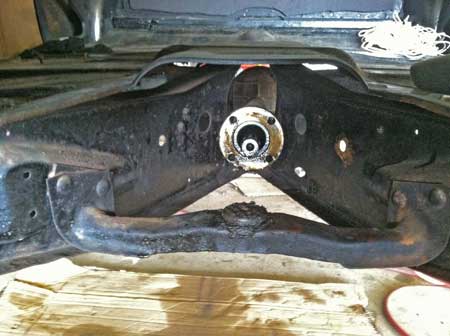 The 1937 Buick featured a drive shaft enclosed in a torque tube. As the car's wheels turned, the torque tube transferred tire traction into forward momentum by pushing on the transmission and engine assembly. This is a simplistic explanation but the takeaway idea is the fact that I needed to remove the torque tube and rear axle assembly as a single unit.

Before I would have access to the torque tube and rear axle I had to disconnect the car's rear suspension consisting of lever action shocks tucked inside the frame and leaf springs. As you've probably seen in other pictures my car was incredibly dirty so finding mounting bolts turned into an excavation project in some areas and a few bolts required the use of the pneumatic impact wrench.

Naturally I had to fully support the car on jack stands as I removed the rear suspension. I placed a motorcycle jack under the rear differential for support and just before I was ready to disconnect the leaf springs I raised the car and placed jack stands under the frame just forward of the leaf springs. When the leaf springs and shocks were disconnected I lowered the rear axle on the motorcycle jack freeing the entire rear end. With the springs and shocks out of the way I was able to slide the rear end and torque tube far enough to the rear of the car to free the torque tube from the frame. Once the tube was out of the frame I just swiveled my motorcycle jack and within moments the assembly was out and my car was now just a frame and body on jack stands. I happily and nervously snapped a few pictures and emailed my friends stating "There's no turning back now!" 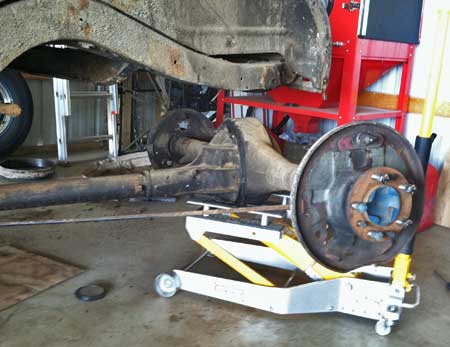 With the help of my motorcycle jack I was able to pull the rear end by myself. 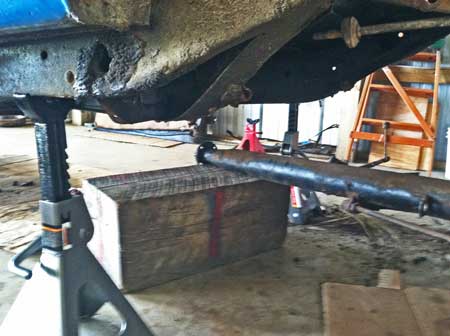 As I pulled the rear end assembly rearward I had to support the torque tube when it was freed from the frame.

My rear end and torque tube was a mess. The underside was encased in undercoating, grease and dirt while the topside was rusted metal. Hours were spent degreasing, brushing and sanding. I don't have a sandblaster so my tools of choice were an angle grinder with cup brush, sand paper and plenty of rags soaked with lacquer thinner and other magical chemicals. With the axle and tube prepped the unit received two coats of etch primer followed by two coats of 2K primer. This was then finally top-coated with Eastwood Extreme Chassis Black in a satin finish. I was surprised at how much gloss there was in the satin finish but I was very happy with the results.

It is worth noting that I had to remove the car's brake backing plates before cleaning and painting the rear end. Unfortunately, to remove the backing plates you need to remove the actual axles because their end hubs prevent the backing plate from sliding off. On the 1937 Buick, axle removal is completed by opening the differential case and removing the spacer block between the two axle shafts. This block is held in place by a pin and that pin is held in place by a set screw. This set screw on my car was a total bear to remove. I had to walk away several times and I think I may have cursed a few times too but I finally freed it by using a lot of heat and an impact driver/hammer combination. With the set screw removed the pin slides out and with it comes the spacer block. This free space now allows you to push the axle in toward the center exposing a U-clip that slides off with gentle finger pressure. With the U-clip removed the axle can be pulled straight out and the brake backing plates are now liberated too. 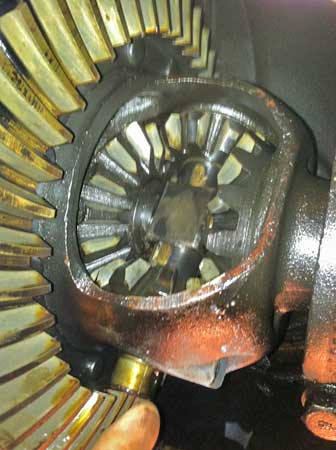 Spacer pin slides out after the set screw was removed. 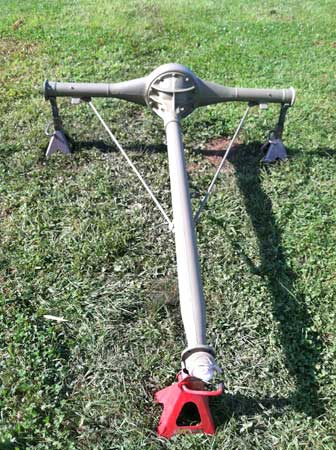 With my torque tube shiny and clean I turned my attention to the remaining components of the rear suspension. Just as I did with my car's front shocks, I sent the rear shocks to California for overhaul at Five Points Classic Auto Shocks. I have neither the tools nor expertise to overhaul those units and when I considered the fact that the rear shocks can only be removed and installed with the leaf springs removed I felt better leaving that job to the professionals. 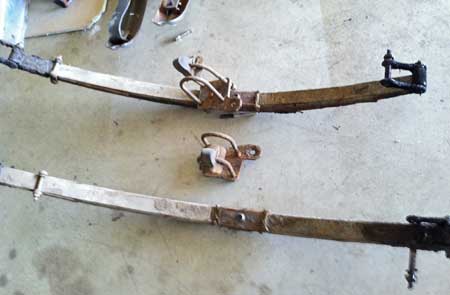 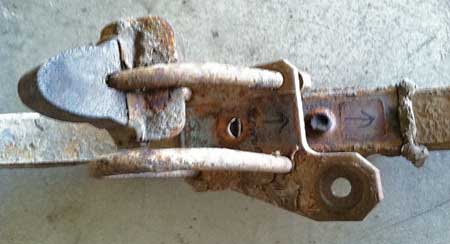 Leaf spring components marked and documented. I will get new U-bolts and already purchased a new rubber bumper from Steele Rubber. 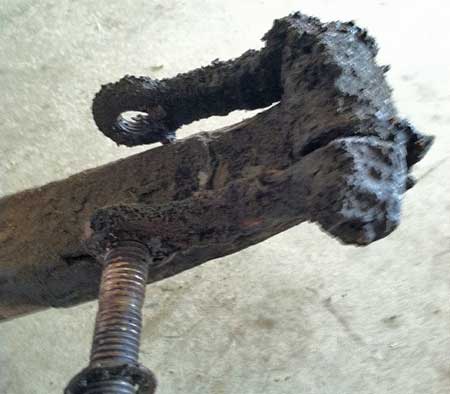 I will replace these spring shackles. 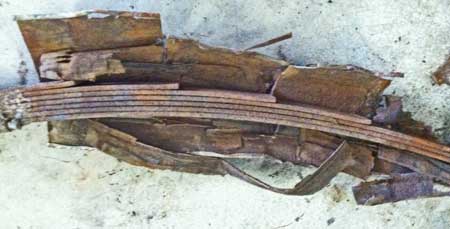 After disassembly my springs were cleaned, prepped and primed but not fully reassembled. I still need to recreate new metal gaiters and canvas wrap but, in all honesty, I am not 100% certain at this time if I will leave them exposed or not mostly due to cost. Early estimates to have new metal gaiters fabricated exceeded $1500!

This shows the multi-piece metal gaiters. These are obviously not reusable. I either need to pay someone around $1500 to make new ones or come up with an alternative. 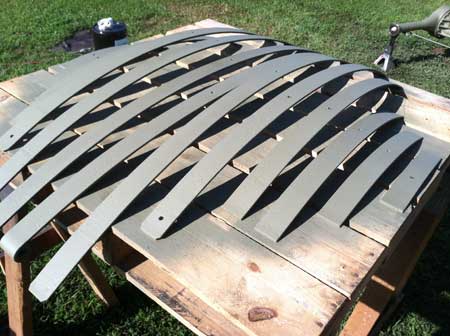 As my car sat as just a body on frame I decided to clean and paint the frame and underside of the body. Without the ability to remove the body from the frame I treated the underbody and frame as one unit in my mind. I spent weeks stripping, scrubbing, cleaning, sanding and prepping everything. I bought a forced-air respirator so I wouldn't have to breathe dust or chemicals as I worked. Using this took some getting used to but I plan to use it when I paint my car's body so this was great practice. 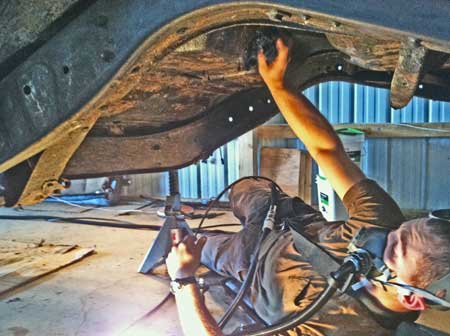 Action shot of the scrubbing. After the undercoating was removed I wire brushed & sanded the metal. 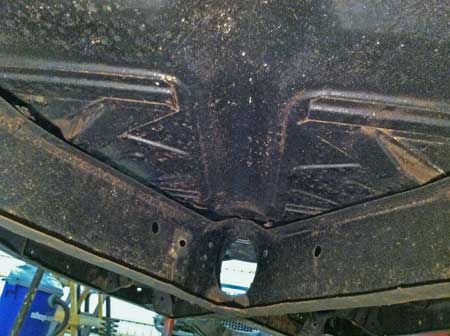 This is a typical view of the underside of my body. That undercoating came off with "Wash Thinner" a fairly harsh chemical, and lots of elbow grease. If you don't use gloves while using Wash Thinner you will get sick. Its nasty but a real joy to use because it gets results.  Fire would have worked too but I didn't only had about 24 inches to work with and didn't feel comfortable wielding a torch and scraper in a cramped space.

The results of my painting prep was nowhere near as good as sandblasting but I felt it was adequate. The frame and underbody received two coats of etch primer, two coats of 2K primer and top coated with Eastwood Extreme Chassis Black in the same satin finish as my rear axle and torque tube. Naturally there was plenty of sanding in between coatings and I used a DeVilbiss Finishline 4 spray gun for all of my painting.

I found something pretty cool during my frame prep and it was something that I hated to cover up. It was the letters "RR" written on the frame just above the right-rear tire. This was presumably written on that rail before frame assembly so the frame builders would know on which side that rail belonged. Seeing that gave me a sense of connection to the factory workers of 1937 so as a historian and librarian it hurt a little erasing that original item. The joy of seeing new, shiny frame paint outweighed the pain of covering it up and at least I still have the pictures to tell the story. 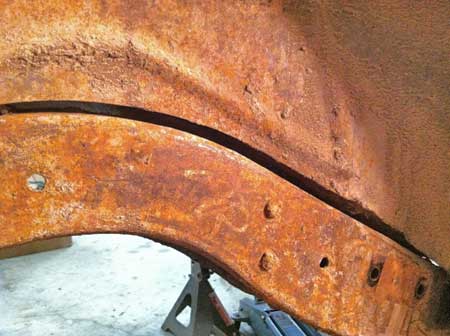 This is the "RR" that I found after scraping the dirt and debris off of my frame rail. 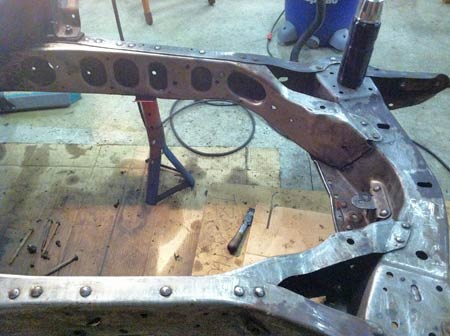 Still cleaning the frame by hand but it is getting cleaner!

When I strip the paint from my car's body I will obviously have to protect the newly painted frame. That stripping is planned for spring of 2014 and next month I plan on showing off the paint booth I've fabricated around the body. I also plan to highlight the removal and replacement of my rear-wheel bearings.

Before ending this journal entry I am proud to show off my refurbished horns. The Buick has two horns on the car — a high pitch horn and a low pitch horn. When sounded together they make a fantastic "get out of my way" blast. The horns are essentially straight units that are coiled to save space. They have an electronic component on the inside. With the electronics removed I cleaned the remaining metal in the bead blaster then primed and painted the separate pieces. I then reassembled the horns, tested them to make sure they would still sound and covered the assembled units with two more coats of paint. It will be a while before I get to install the finished horns but it is nice to see the pile of finished parts and components growing by the week! 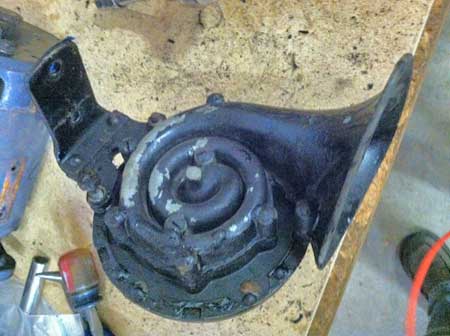 Underside of the horn pulled from the car. 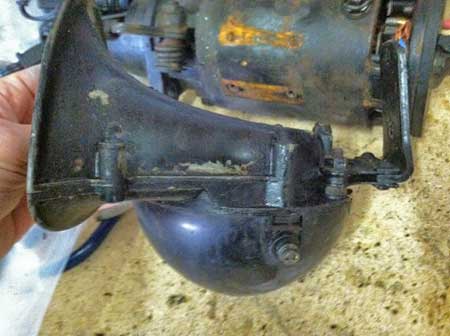 Side view of the upside down passenger horn. 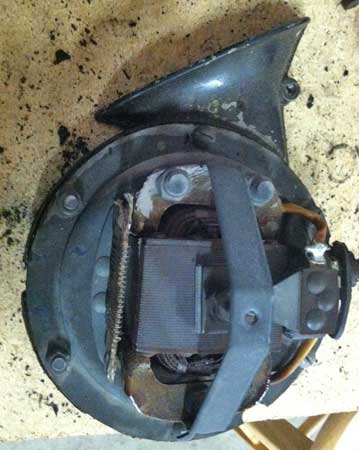 The "guts" of the horn are now exposed. 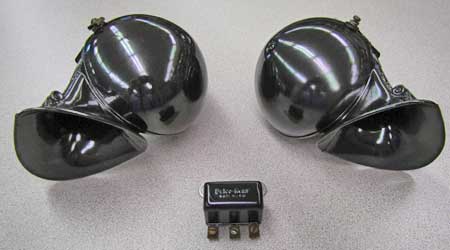 My finished horn and horn relay. 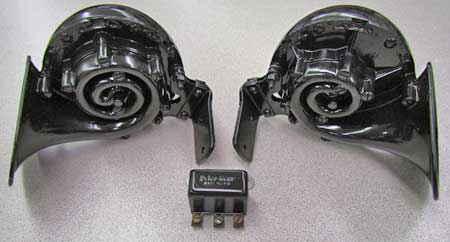 Underside of my finished horns and horn relay.