How to Replace a Corvette Half-Shaft U-Joint

Starting with the 1963 model year, independent rear suspension became standard on all Corvettes, foregoing the solid axles that had been used for the previous decade. The universal joint, or u-joint, made IRS possible. While u-joints had always been used to couple the front of the driveshaft to the transmission and the back of the shaft to the rear differential, now their role expanded to also coupling each rear drive shaft (or half-shaft) to both the differential and the rear wheels. U-joints play a crucial role in the overall scheme of things, since they are responsible, ultimately, for the delivery of power from the transmission to the rear wheels.

While I'm illustrating the replacement of u-joints on a Corvette half-shaft here, remember that u-joints are present on the driveshafts of virtually every rear-wheel-drive vehicle, so these procedures apply to the driveshaft u-joints as well.

Normally, these little workhorses require no maintenance other than a periodic greasing. However, as with all things mechanical, parts eventually fail or wear out. Such was the case with my 1976 customized Corvette. I was cruising along happily at 65mph when I noticed a slight vibration that quickly became very pronounced, accompanied by a loud thumping sound. I immediately pulled over to the side of the road and called a towing service to flatbed the car home. At this point I suspected a u-joint failure, although I didn't know if it was a driveshaft u-joint or a half-shaft u-joint that had given up the ghost. When I got the car home, I discovered that the outboard (wheel side) u-joint on the passenger side of the car had given out. I decided to replace all of the u-joints on both half-shafts, reasoning that if one let go for apparently no good reason, the others also may follow suit eventually. Here's what it took to remove the old u-joints on the half-shafts and replace them with new ones. The procedures are the same for all 1963 and later Corvettes. 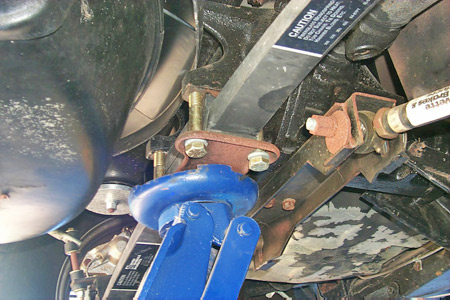 Elevate the car by placing the pad of a floor jack beneath the rear spring securing plate. 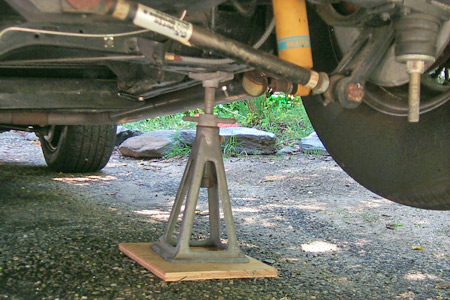 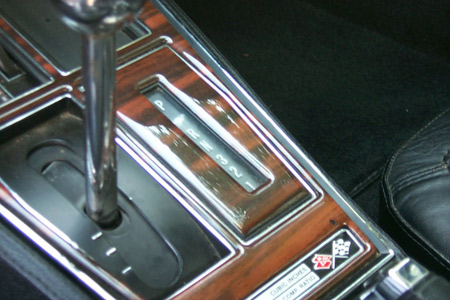 Put the car in neutral, regardless of whether it has an automatic or manual transmission. This is necessary so that you'll be able to rotate the rear wheels while working. 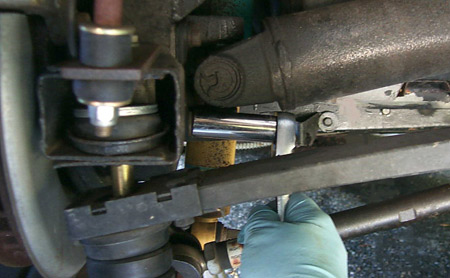 This is a messy, greasy job so wearing a pair of disposable Nitrile gloves is highly recommended. Use a ratchet and socket to remove the four bolts that hold the trunion (half-shaft flange) to the wheel assembly. 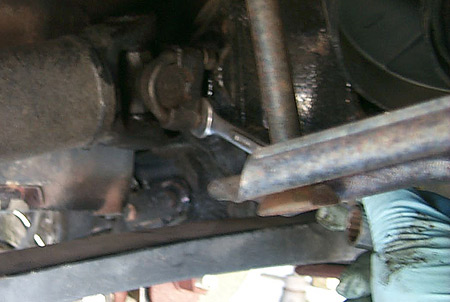 The nuts of the u-bolt that hold the u-joint to the rear differential spline shafts are removed next. A gear wrench definitely makes this task easier, since you'll only have about 7-10° of wrench swing because of the proximity of the struts, spring and stabilizer bar. 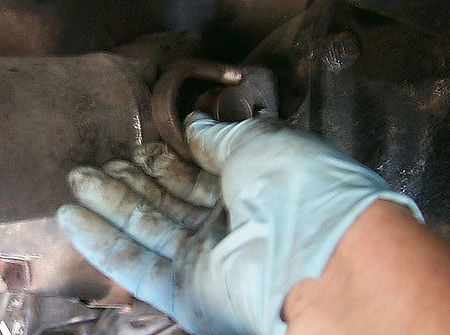 When the nuts are off, remove the u-bolts. You may need to wedge a screw driver between the u-bolt and the u-joint bearing cup to persuade them out. With the u-bolts out, by rotating the tire about half-way in either direction, you'll be able to slide the entire half-shaft with u-joints out. 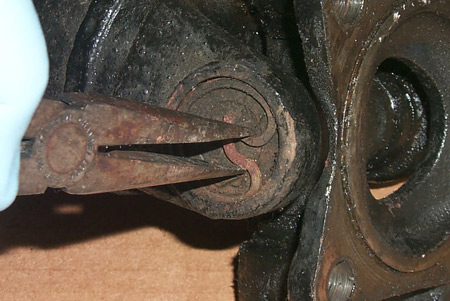 On the workbench, use needle-nosed pliers to remove the snap retainer rings on the u-joints. 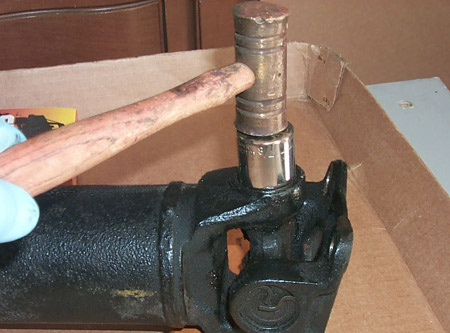 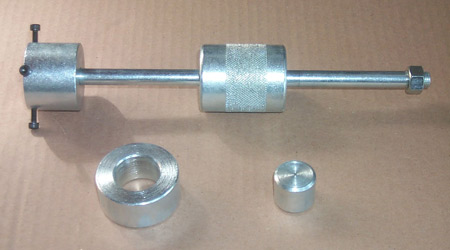 Zip Products also has a special tool available for removing and installing u-joints, shown here. It consists of a sliding cylindrical hammer (top), a receiver cup (lower left) and a button (lower right). The button goes into the lower bout of the sliding hammer and is retained by tightening the four Allen screws for removing u-joints. 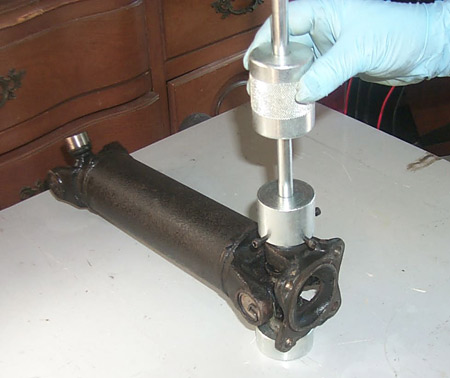 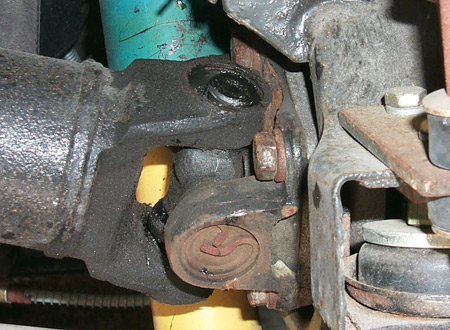 Here's the gremlin that ruined my ride. As I suspected, the passenger-side outer u-joint had failed when one of its retainer clips came loose, thus allowing the bearing cup to work its way free resulting in the bad vibrations and thumping. 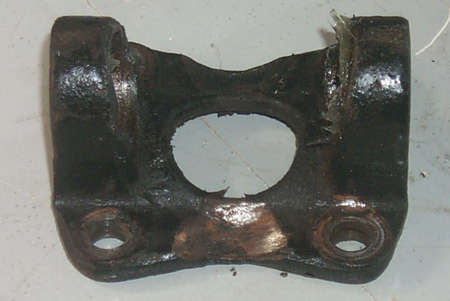 As you can see, the slapping of the u-joint spline against the trunion made its mark. 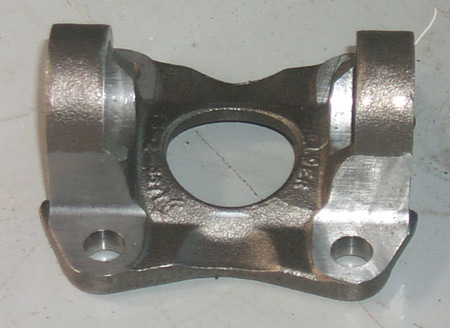 For safety's sake, a new trunion was obtained from Zip Products, shown here prior to giving it a coat of Rust Oleum Satin Black. 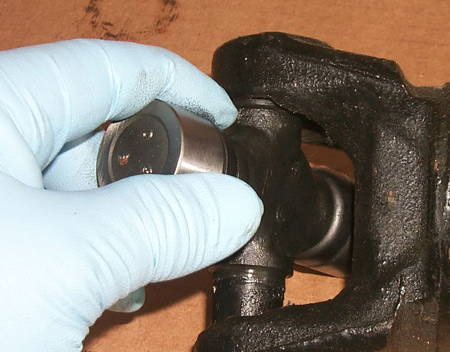 Place a new u-joint with the bearing cups removed in the differential-side flange of the half shaft. Be careful when you remove the bearing cups, as they are lined with needle bearings which can fall out fairly easily. 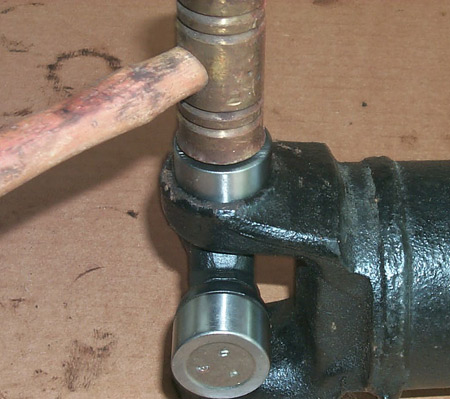 Place a bearing cup on one of the u-joint splines and tap it down with a mallet, then flip it over and repeat the procedure on the other side. 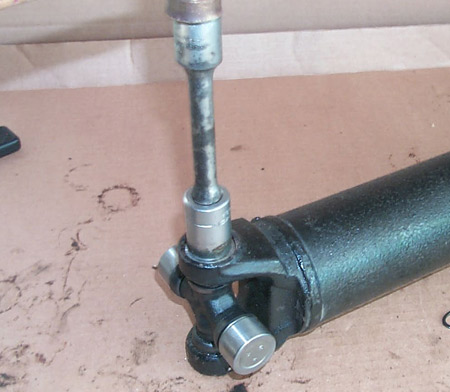 You can use a 7/8 inch socket or the Zip tool to sink the bearing cup down just slightly below the groove that holds the snap retainer clip. 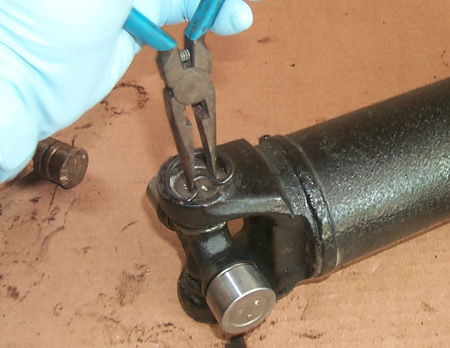 Use needle-nosed pliers to install a snap retainer clip over the bearing cup so that it seats in the groove of the flange. 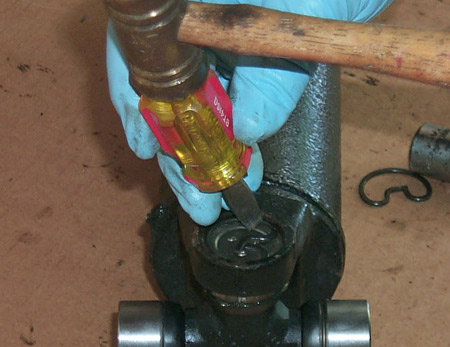 Use a screwdriver and mallet to tap the snap retainer clip all the way into groove; this is very important, since this clip can and will spring out if it isn't solidly seated in the groove. 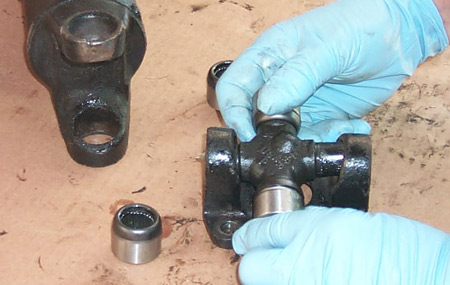 Next, place a new u-joint sans bearing cups in the trunion, install the bearing cups using either the 7/8 socket/mallet combo or the Zip tool, install the snap retainer clips and tap them home as shown in the previous steps. 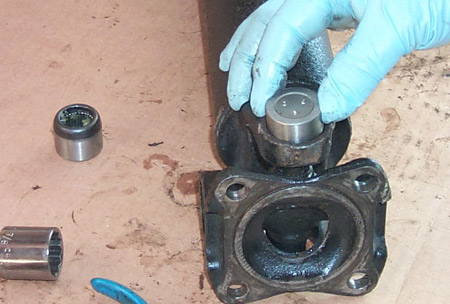 Joining the trunion with the half-shaft is the next step. Insert the remaining ends of the u-joint (with bearing cups removed) into the half shaft, then place a bearing cup on one end. 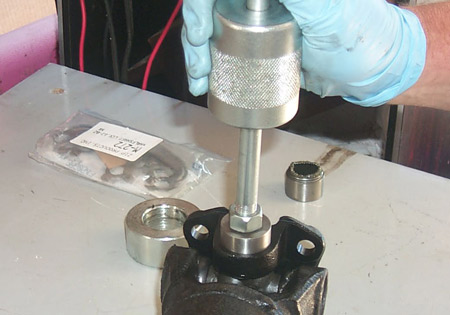 Repeat the installation procedures as before to seat the bearing cups using either the Zip tool or the socket/mallet combo again. Then install the snap retainer clips and make sure they are seated properly. 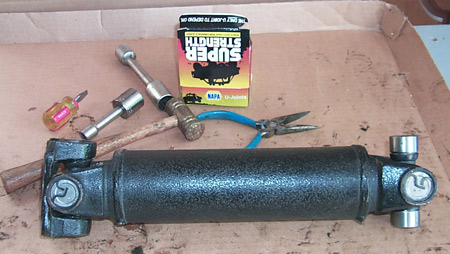 Here's the half-shaft with new u-joints at both ends, ready to go back in the car. 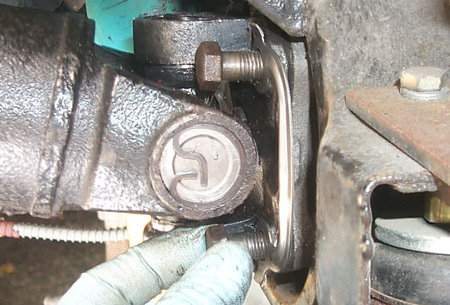 The half-shafts I removed from this car had lock washers on the trunion retaining bolts, which was OK but not correct; they should have had french locks to keep them from coming loose, so a set of french locks was obtained from Zip products and used for the reinstallation. Start by seating the bearing cups in the differential spline, but don't secure them yet, so you can wiggle or move the half shaft as required to install the trunion bolts with french locks, which is the next order of business. 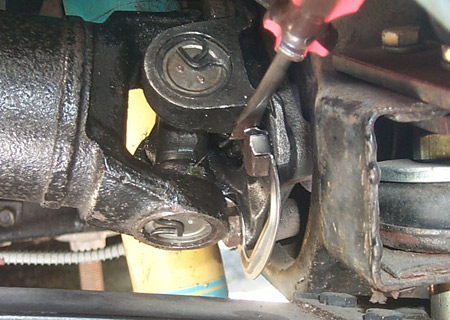 After tightening the trunion bolts, use a screw driver to bend the ears of the french locks down against the heads of the bolts; this will prevent them from working their way loose. 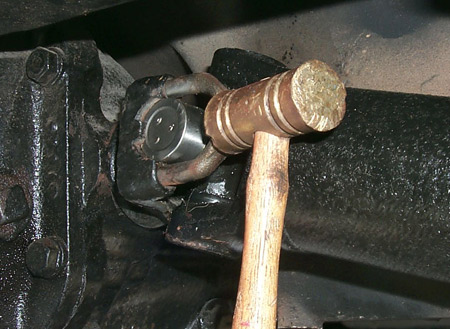 Insert the u-bolt in the spline holes after making sure the bearing cups are seated properly. Use a mallet to tap it home. Install the other u-bolt as well, rotating the tire as required to access to it. 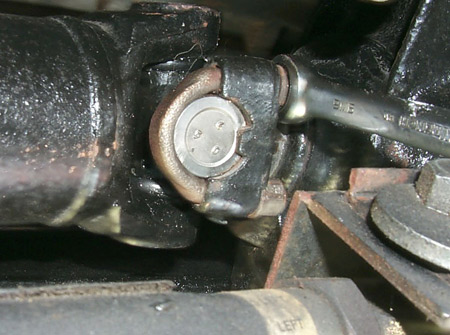 Install the lock washers and nuts on the u-bolts and use a gear wrench to tighten them down. Rotate the tire and re-check tightness of the nuts on both u-bolts, then proceed to install the half-shaft on the opposite side of the car, repeating all of these procedures.

Lower the car and take the Corvette for a test ride. Start out slowly and gradually increase your speed until you reach highway cruising speed. All the while, keep your stereo turned off and listen for any sounds that aren't normal and any vibrations. If everything checks out OK, you've done the job properly and you can relax and enjoy the rest of the ride.