What you need to know about automotive Jacks

When you're working on cars, getting them up in the air is important. A good jack is designed to lift up a car (or at least part of it) quickly and safely. There are many different types of jacks and many of them are designed to do their job in a certain way. Not all jacks do the same job.

Here is a selection of different jacks made by Ausco Jacks. The model described as an axle jack is what we call a hydraulic bottle jack today. The "garage horse" is a stand jack, which holds a car up, but doesn't actually raise it.

In some cases, the way that a jack works depends on whether you're using it to fix your car in a shop or to change a flat tire on the side of a highway. Early Ford cars and trucks used screw-type pedestal jacks that lifted the car on a disc-shaped pedestal raised by a screw shaft. At the top of the screw shaft was a disc with holes in it. You could stick a straight bar through the holes and then spin the screw shaft up or down by turning the bar in the proper direction.

My '36 Pontiac has "S" shaped bars attached to the rear of the frame. These are designed to match up with the jack, which lifts against the bars. This seems better than using a bumper jack, which can bend the bumper.

Nevertheless, conventional bumper jacks were the standard in the '40s, '50s, '60s and '70s when cars had heavy metal bumpers. These jacks had a hook that attached to a ratcheting mechanism. Sometimes the hook just fit under the bumper and sometimes it fit into a slot in the bumper. The ratcheting mechanism had a little arm that the straight end of a lug wrench fit into. Pushing down would ratchet the car up one notch at a time.

Bumper jacks of this style had to be assembled. When disassembled for storage, the parts usually rattled around in your truck. There were springs to fasten them tightly, but they were hard to use and often got lost. It was easy for a car to roll forward and fall off a bumper jack. In addition, the mechanisms were prone to wear. On some jacks, the hooks were poorly designed and allowed cars to slip. When cars did slip, the pieces of the jack went flying.

In the mid-'60s, when I got my first car from my grandfather, he gave me a tri-pod bumper jack with small chains between the three legs and a crank on top. This worked pretty well for a while, but it was cheaply made and eventually fell apart. Luckily, it did not break the final time when I was under the car. 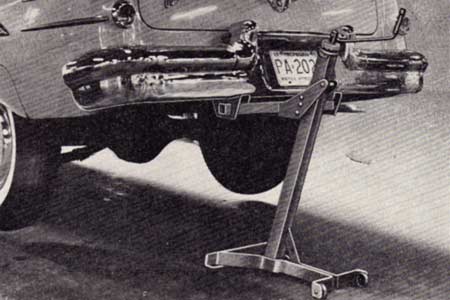 Here were see a mechanical one-end lift in action. This Saf-Lift model weighed 47 lbs. For lifting, a 4-pitch screw worked a re-circulating ball-bearing nut to permit extreme lifting. When lowered, the saddle could drop to 5-1/2 in.

Scissor jacks are most commonly found in modern cars and trucks. They come in different sizes. A long screw that is turned by a handle runs through the center of the jack and moves the scissor mechanism. The nice thing about scissor jacks is that they can be lowered so far they fit under nearly anything. They are also lightweight and a good scissor jack will not wear out for a long time. However, a cheap scissor jack will get ruined the first time it's used under a heavy load. The scissor will cut into the screw if it's made of cheap metal.

Floor jacks are easy to use and have great lifting ability. They are heavy and have long handles that make them hard to carry. Some racing style floor jacks are made of aluminum to save weight. Some also have removable handles. I have a big, strong, scratched-up old floor jack that I bought at a swap meet for $25. I think it can left anything and it seems to be unbreakable. I bought it after breaking several cheap floor jacks that looked great, but didn't last long.

Floor jacks have a hydraulic cylinder to raise and lower the arm. At the end of the arm is a sturdy cupped disc that can be placed against a frame or rocker box. Don't place it against sheet metal or it might bend it (or go through it) when it tries to lift the car's weight. Twisting the handle activates or de-activated the hydraulics. Pumping the handle makes the hydraulic cylinder lift the arm up. 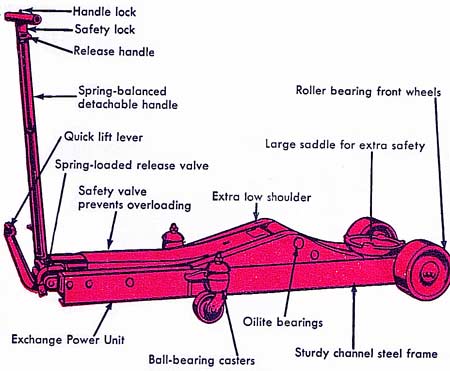 This is the latest in floor jack technology, circa 1957. Its manufacturer, Ausco Jacks, called this a hydraulic service jack. Ausco was a trade name of the Auto Specialties Mfg. Co., Inc., of St. Joseph, Mich.

A hydraulic bottle jack works like a floor jack, but in a straight up and down manner. Because the vehicle is lifted directly by the cylinder (instead of by an arm that the cylinder lifts) a bottle jack can lift more weight than a floor jack with the same capacity hydraulic cylinder. The one big trouble with bottle jacks is getting them to fit under the car in the spot you want to use them (which is usually a low-hanging frame rail).