How To Clean a Paint Gun

Like many of you, I have been guilty of not cleaning my paint guns properly from time to time. After all my years of painting, there is no excuse for it, other than occasional laziness. I know cleaning your paint gun is a necessary evil, and there are a few different methods for cleaning it. The first thing to remember is to clean it right away after each use. If you allow the paint to sit in the gun, even for a few hours, it will begin to harden and then soaking it simply won't be sufficient. 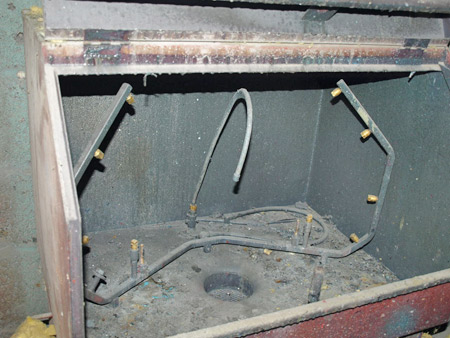 This is a paint gun cleaning cabinet. The cleaner, known as gun wash, is sprayed through the jets, much like water in a dishwasher. You can place the individual pieces of the gun directly on the jets for a faster cleaning.

If you have access to a paint gun cleaning cabinet, this is the easiest method. You simply take the gun apart, place the pieces into the cabinet, and the jets spray cleaner at the parts until they are clean. It's kind of like a dishwasher for paint guns, but instead of spraying water, it sprays gun wash.

Most folks don't have a paint gun cleaning cabinet, so the practical way to clean your gun is to dismantle it, and soak it in cleaner. I've seen painters just pour some reducer or thinner into the gun, spray it through for a few seconds and call it done. I hate to admit it, but I've done this myself, and always end up regretting it. This really isn't sufficient, and although you might be able to keep your gun working for a while, eventually you will have to dismantle it and clean it properly. I'm going to explain how to clean it after each use so you won't have problems, but I'll also show you how to clean a badly neglected gun, since I have one of those too.

Maintaining your gun properly, much like maintaining your car, will keep it working for years to come, and it's not that hard. The first step is to empty out as much of the paint as you can, but never return paint with hardener added to the can! It will harden the remaining paint in the can, making it useless. If you've been spraying basecoat with no added hardener for example, you can empty the left-over paint from your gun back into the paint can, but nothing with hardener added.

Then I like to add a little gun wash to the gun, just a little, and spray it through for a few seconds. This just removes the excess paint to make the actual cleaning easier. Sadly, after a late night of spraying, that is sometimes all I do, and it's really not good enough. It may seem clean, but there may be small amounts of the previous paint stuck in the gun that may spit back out onto future paint jobs. 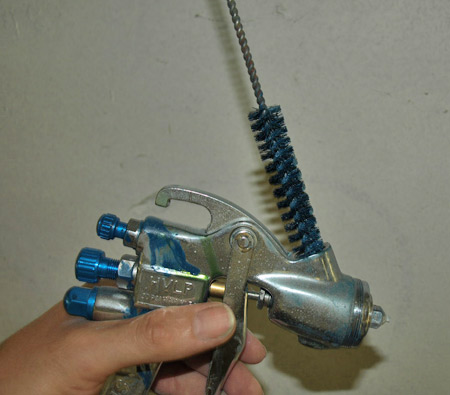 You can buy paint gun cleaning kits that include little brushes like this one for brushing out the harder to reach places in the gun.

The next step is to unscrew the end cap of the gun, and using the wrench type tool that came with the gun, unscrew the nozzle and remove. (To understand how a paint gun works, and to identify all the parts, go to How A Spray Gun Works). If you use a siphon feed style gun, you can soak all the parts in the reservoir, but if yours is a gravity feed gun, like mine, you'll have to have another container to soak the parts in. Use a metal container because the gun wash chemical will eat through many plastics, and that's a mess you don't want, trust me! If you thought dried paint was hard to get out, imagine melted plastic in those tiny holes. Soak all the parts you take out, in a metal container. 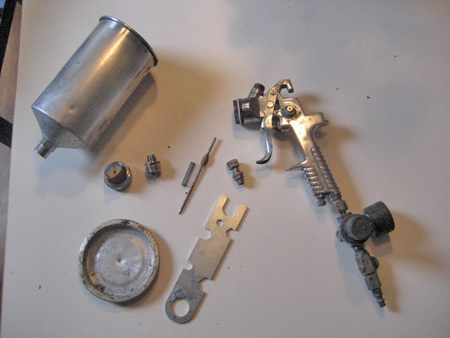 These are the pieces of the gun after dismantling it, including the tool that came with the gun to dismantle it with.

The needle and spring simply unscrew by hand from the back of the gun, and must also be soaked. Removing these parts also allows the gun wash to penetrate further into the gun and clean the hard to reach areas.

If your container is large enough, you can soak the gun itself and gun cup, but if not, a lint free cloth dipped in gun wash can be used to wipe it down. You may not think it's overly important to make the outside of the gun spotless, but if you're going to do it, do it right. Be especially careful not to soak the seal around the lid of the cup too long, as it will swell, and not seal properly later. Since you're cleaning your gun right after using it, the paint should wipe off easily.

When taking the gun apart, removing the needle and spring requires unscrewing the adjuster; I recommend leaving all the other gun settings as they were. When reassembling the gun, screw on the nozzle by hand and then tighten using the wrench. The cap (end piece that the paint comes out of) screws on hand tight next. Then insert the needle, spring, and adjuster. Hold the trigger all the way in and screw in the adjuster until you feel it pushing the trigger back. This is your starting point and you will make further adjustments from here the next time you're going to spray paint. Adjusting this needle determines how much paint will flow, so the next time you are getting ready to paint, put some paint in the gun and spray on a piece of cardboard on the wall. Adjust the needle in until the right amount of paint is coming out. 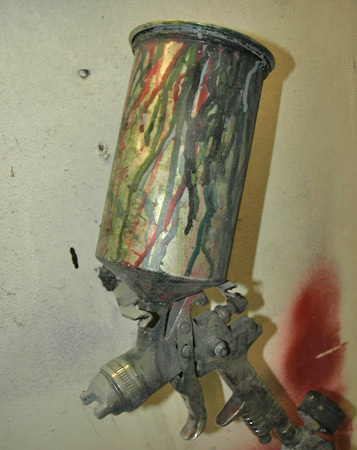 This is a badly neglected paint gun. The choice here was to either throw it away or get creative with it's cleaning.

This particular gun was badly neglected. After not cleaning it properly after painting with it, I used it mostly for primer, and stayed in the bad habit of not cleaning it often enough. Eventually the build-up got worse and worse until it stopped spraying properly. At that point, instead of cleaning it thoroughly, I set it aside and used a different gun. For this article I brought it out and decided to clean it, but the cleaning method was different than that of the other gun shown in a previous picture. 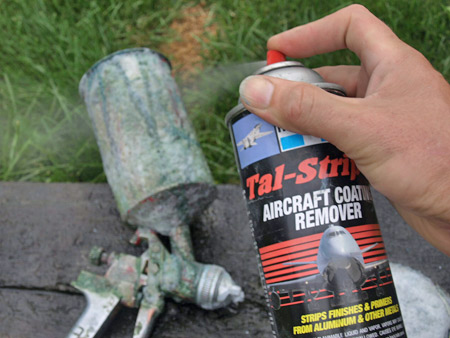 Paint stripper comes in spray can form and liquid or gel that you brush on. I used both spray and liquid to clean this disaster.

Not only did the gun have to be taken apart, but paint thinner and gun wash were both insufficient to remove the dried on sludge. In this case it was necessary to use paint stripper, which I got in both liquid (for soaking) and a spray can for those harder to reach places. This isn't the primary use for paint stripper but when you have a gun in this condition, your choices are either throw it out, or get creative.

The paint didn't come off with one application of stripper. It was necessary to apply it, allow it to loosen the paint, hose it off with water, (as water neutralizes paint stripper), and repeat, many times. I began with the outside of the gun since that was the part I would be handling, and then removed the nozzle and cap and soaked them in stripper. 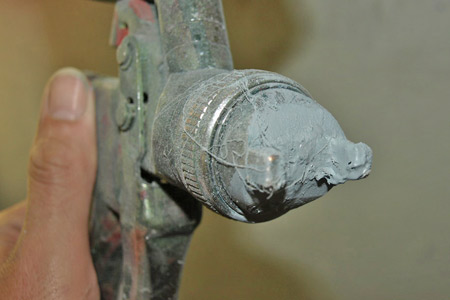 Here you can see how badly gummed up with primer this gun was. You can't even see the holes the paint is supposed to come out of.

This is a time consuming process and I ended up allowing the gun to soak overnight. The actual time spent cleaning it was probably less than half an hour. Soaking the gun is what takes the most time, but is what does the majority of the work. 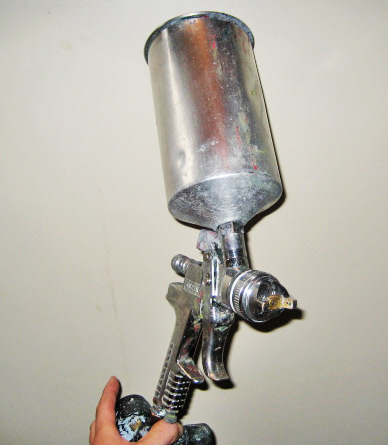 This is the gun that I debated throwing out, but after a serious cleaning, it works like new again.

They say patience is a virtue, and patience was certainly necessary to get this gun clean. This could have all been avoided if I cleaned it regularly. Then a simple cleaning, as with the first gun, would suffice. The two main things to remember are: Clean it promptly after you're finished using it, and clean it thoroughly which includes taking it apart. If you do that, you won't have to fight with dried on sludge that might make you wish you just threw it away and bought another gun.