Did you ever get lost while touring in your classic car or street rod? If so, you probably said, "I wish this old buggy had a GPS like the ones I see my friends using in their modern, everyday cars."

Those who grew up driving older cars tend to think that we can't very easily add modern technology to our relics and rods. Restorers also do not want to make changes that might affect a vehicle's originality, while some rodders are dead set on keeping their rides "old school" cool.

Two years ago I went to the SEMA Show in Las Vegas and was invited to a PR function focused on automotive electronics. There was a heavy pitch going on for GPS systems and, as I walked around the room I thought to myself, "There's nothing here for old car nuts." Boy, was I wrong. As I learned this past summer, using a GPS in an old car is as simple as pie and depending upon how you want to handle the install, it can be done with no modifications to a car, with minimal hidden modifications or with "acceptable" modern upgrades.

Last fall. Jeff Steenweg, of Milwaukee, Wis., bought his "rat rod" on eBay from a seller in California. Built years ago, it had everything he needed, except a speedometer! So, Steenweg now uses a GPS to tell him how fast he is driving. 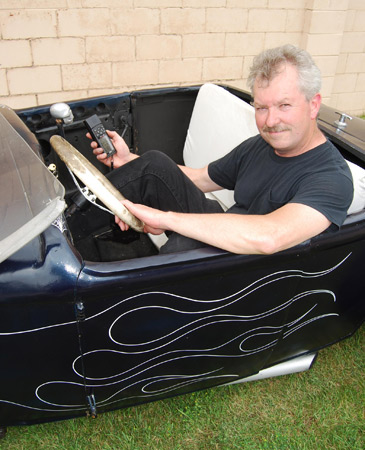 Jeff Steenweg has had the Garmin 12 that he uses in his "rat rod" for about 10 years. It also tells him his speed.

Jeff has had the Garmin 12 that he uses for about 10 years. He originally used it in his Mastercraft ski boat. "To get consistent, accurate speeds for the boat, I found the Garmin more reliable than a pitot tube boat speedometer," says Jeff. The hand-held Garmin 12 runs on batteries and Jeff keeps it on the seat next to him. It looks like a walkie-talkie or an old portable radio. "I don't speed," he says. "But if I ever get stopped, the Garmin shows how fast I was going."

Jeff's Garmin is an older 12-channel unit powered by its own self-contained battery. Its single small screen gives him track, speed, trip mileage, altitude and map coordinate readings, plus time. The Garmin 12 even has go-to, quit, page, mark and enter buttons. Jeff uses the GPS to find rummage sales. "We have saved lots of time and gas by using it," he added.

Restorer Does A Hidden Install

Stu Etheridge of Lynn Center, Illinois, gave me a ride in his 1925 Willys-Knight last summer. The first thing I noticed was a more modern Garmin GPS 260 attached to the car's windshield with a suction cup. "How do you run that modern technology in an old car with a 6-volt electrical system?" I asked Stu. 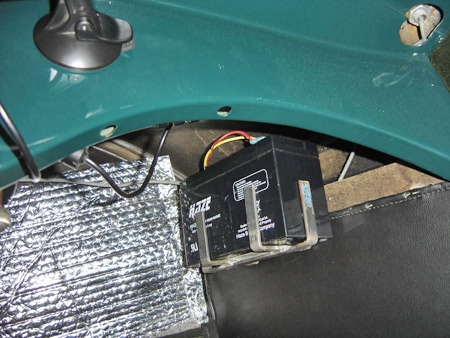 A 12-volt dry cell battery designed for electric fences is mounted behind the dashboard in this '25 Willys-Knight and powers a Garmin 260 GPS.

"I have a 12-volt dry cell battery designed for electric fences mounted in a homemade bracket behind the dashboard," Stu explained. "I made a pigtail to connect the battery to the GPS with a cigarette lighter adaptor." He admitted that the battery has to taken out and occasionally re-charged. "I charge it up about once a week when we're touring," Etheridge told me.

When the ride was over, I wanted to take photos of Stu's Willys-Knight. In less than a minute, he removed the GPS and the car looked totally original again. There was no outward sign of the battery mounted behind the dash. A car show judge would never even notice it.

Stu's Garmin 260 shows a map of the area and the upcoming streets. Simple, easy to understand voice commands call out the distance to the next turn and tell Stu whether to go left or right. The GPS also shows the true speed the car is traveling and the miles covered. This is a big plus in old cars.

The Garmin includes a menu that can be used, in any area, to find gas stations, motels and restaurants. It lists the closest establishments first and those further away are lower on the list. Addresses and phone numbers can also be programmed into the unit. The driver can select an option that tells him his exact location in case of an accident.

Lloyd Gauerke, of Appleton, Wis., also uses a Garmin 260 GPS in his 1931 Willys-Knight. The former Miller-Electric engineer likes using his job talents to upgrade old cars. The "Check Engine" light under the dash hints of a fuel-injection system. This Depression Era sedan looks mostly stock, but also has a 12-volt electrical system. That means Lloyd can run his GPS via pigtail going to the car's now-12-volt cigar lighter. 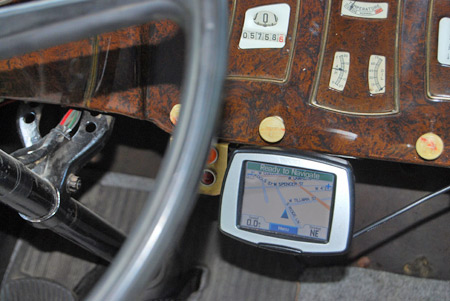 A Garmin 260 is mounted in Lloyd Guerke's '31 Willys-Knight. The car has 12-volts electrics and the GPS is hooked to the cigar lighter.

Gauerke set the GPS to for a short route through his neighborhood and let me drive the car. Voice commands from the Garmin 260 called out each turn. At one point, Lloyd said to intentionally ignore a turn that the Garmin had recommended. It immediately re-calculated our position and changed the route accordingly. We were back at Lloyd's house a couple of minutes later.

Some drivers use a booster pack battery to power their GPS. The Garmin 260 can run up to eight hours on its own battery after you charge it up. Lloyd has friends who use a Tom-Tom portable GPS. "There's probably half a dozen makes you can buy cheap today," he said. Ever the engineer, Gauerke said that the lack of a shielded ignition system in old cars did not seem to affect a GPS.

Anyone with a friend or relative who is into classic cars or hot rods may want to consider buying that hobbyist a GPS this holiday season. Prices on full-featured units are getting so low that the gas savings alone will soon pay back the cost of a unit.