It used to be easy to get a good engine for rebuilding a street machine.

All you had to do was visit your local wrecker. Times have changed. Just locating a decent Chevrolet 350 can be difficult and big block cores have gone sky high. The rise of online classifieds and recent high scrap metal prices created a perfect storm of high demand and low supply. Learn how to score that ideal engine for low cash.

In the last fifteen years we've witnessed a trend in which restored cars with matching number drive trains drew the most money at auctions. Another recent development in the recycling business placed a premium on ferrous metals. The price of scrap metal went as high as $300 per ton in 2008 before the economic recession materialized. This meant a lot of engines, transmissions and bodies were scrapped. While there are some enlightened recycling yards setting aside the V8s for resale, many simply purged their stock as soon as the quick selling stuff had been stripped. These two unrelated events have brewed a sharp increase in engine prices.

It gets disturbing when you explore the engine rebuilder's scene. If you want a basic small block Chevrolet, you've nothing to worry about. If you're looking for a big block Chevrolet they're still available, for a hefty price. The more high performance versions of Pontiac, Oldsmobile, or Buick 455 engine are rebuilt on a customer exchange basis. That means you supply the core which they either rebuild to basic specs or to your specs for a fee. 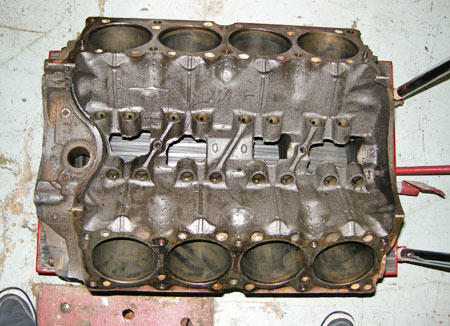 Non Chevy performance engines are hard to find now. Rebuilders need your core to build up Pontiacs, Olds or Mopars. The cores now cost what we used to pay for wrecking yard runners.

Some of the big rebuilders carry limited stock of GM's non-Chevrolet engines but you'd better be sitting down when they tell you the price. Ironically, the rebuilders aren't making a killing on these 'boutique' engine build ups. In fact, the profit margins are so small they reject engine cores that come in without bearing caps. The extra machine work to properly fit new caps to the block is high enough to make the engine uncompetitive to re sell. When given this news, many owners just scrap their cores. In summary, old engines are hard to find and expensive to buy. We're going to review your options and help you with a plan to score a good engine without going broke.

I divide old engines into two categories, pre 1967 and post 1967. Partial VIN numbers start appearing regularly on drive trains around that time. Prior to 1967, it was only expensive luxury models that were stamped for tracking stolen parts. Corvette engines were given VINs as early as 1962. By 1969, manufacturers had to by law supply a VIN number on major assemblies to deter thieves re-selling them. It's great news if your car still is original, not so good if the engine is missing or damaged beyond repair. By contrast, the early sixties and 1950s era engines don't have VINs and this allows you more options in selecting a core. The recent street rod and custom machine trends leave the door wide open for power from the venerable flat head to the Corvair pancake engine. If you want more information on date and engine codes, a little research will give that valuable info.

Since urban wrecking yards no longer are reliable sources for the engines, you have to do some lateral thinking. Start with the obvious; first tell your car buddies and good neighbors what you're looking for. Leave a description if necessary. If your net is wide, your chance of a catch is good. Believe or not, one of the best places to find good engines is project cars. I zoom in on cars advertised as "NOM" or non original motor. This could have the ideal engine for your car. Many cars were hot rodded back then and a swap from a Chevy 350 two barrel to a 427 was common. Mopars were upgraded from lowly 318 two barrel to 340, 383 or 440 status. Combing the classifieds, you'd think the 440 big was optional in 'cudas and Challengers all the way to 1974. It was deleted by 1972. Swapping has been around a long time. Some of those swaps are good units. 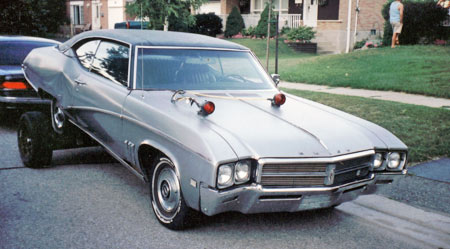 This 1969 Buick Skylark was found through the buddy network. It's 350 four barrel V8 and TH400 transmission will be used in a '69 Skylark convertible restoration. Owner sold the body and trim parts.

Another good source for engines is law enforcement auctions when they sell inventory from various search and seizures, lost and unclaimed property held during investigations. The City Public Works often hold auctions of their truck fleet. Often police and city public works vehicles make good candidates for engine rebuilds. The mileage will be high, but consider this; they were maintained by a garage under severe service schedule with products you and I couldn't afford for our own cars, thanks to your tax dollars. It's also a well known fact engines with lots of heat cycling exposure make excellent rebuild candidates and are favored by experienced performance shops. They are much better than the proverbial "little old lady who drove it church" engines because the metallurgy has been toughened under stress. It won't come apart on the track. Country farm auctions are yet another source. Some excellent oldies engines are found there. The old school street rodders score big on the stroker truck flathead engines this way. 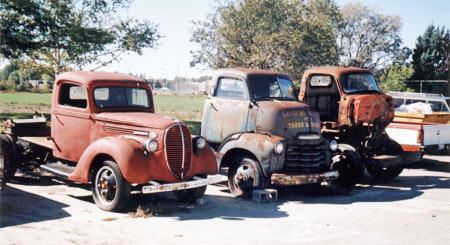 Another good source for engines is the compound yard. It's common for vehicles to be abandoned in large urban areas and the city police often contract a yard to tow DUI suspect vehicles as well. This Cadillac may not be a looker, but it has the 390 Caddy mill and transmission which no longer appear at engine rebuilders. Many a full size sedan has ended up in storage because the previous owner pushed his luck and decided to cut his losses. Another example of a compound sale is this black '63 Thunderbird. It's too rough to restore given the current value of these cars, but it makes an excellent drive train donor. 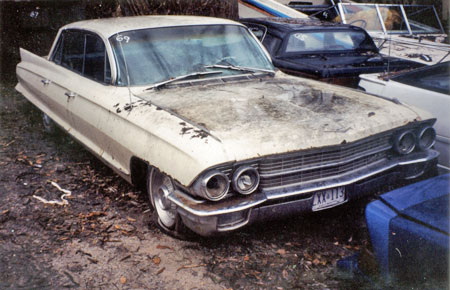 Compound yards often sell vehicles which owners have abandoned due to accidents. This1962 Cadillac yielded a good 390 V8. 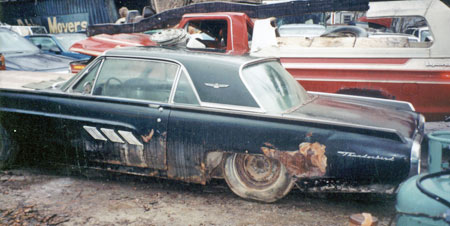 Let's suppose you're looking for something a little more desirable. You might consider this route if you have time and a bit of money. This 1959 Catalina was a victim of poor storage and was sold for parts. New owner got a decent 389 Pontiac that way. Try making the rounds of repair shops and letting the owners know you're interested in a decent engine. Tell him what years and model you're looking for. Quite a few of them are hobbyists themselves and have excellent contacts. Sometimes a mechanic's lien will come up and produce a good specimen with work already done to it. Bodyshop owners are often in the same position and may be able to help track down a good engine. One shop may find a great set of cylinder heads while another guy turns up a good block or transmission. That's happened many times. Here's an example where searching for one item led to another entirely different and exciting find. My friend took me to see this pal of his who owns a large property filled with stuff. I went there looking for Trans Am parts. I found lots of amazing cars and trucks. This 1940 Plymouth business coupe was just one of several resting inside a barn. An excellent original fat fendered rod ready to go. 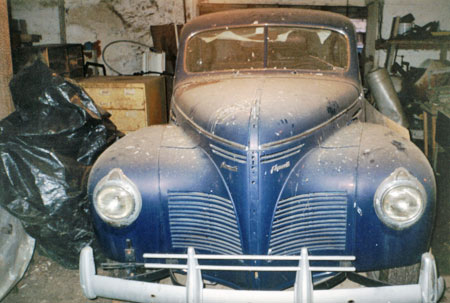 This 1940 Plymouth coupe was discovered while searching for Trans Am parts. It's an excellent barn find inline six ideal for street rodding. Keep all your options open.

Let's go one step further and say you're looking for a particular engine. Suppose you have a 1976 Corvette rolling shell and want to put in the closest match to what was originally in there. You know from the VIN tag it's supposed to have an L48 automatic 350. Your cowl tag suggests it was assembled in February '76. That means you'd like an L48 code engine built no later than January of '76. That's going to require specialized help. Contact the Corvette clubs online and make inquiries. Some one may be able to dig one up for you. Remember, the more particular you make your requests, the longer it'll take to find it and it'll likely cost more money. There are even registries online that track 'lost' and 'found' engines from rare muscle cars. There's a BOSS 302 Mustang registry, a Pontiac SD 455 registry, a Ram Air IV and all sorts of 426 hemi registries. With a little searching you may be able to find one for your car.

To recap, decide what you're looking for and what you're willing to accept for an engine. Do you just want a rebuildable core or does it have to be running? Will any year Chevy 350 work or does it have to be an L78 396 to match your Chevelle SS? Your options for hunting include; your buddy network, project cars, law enforcement and city public works fleet auctions, compound yard sales, muscle car registries, mechanic and body shops.