One of my least favorite jobs during any restoration is the endless amount of rust and paint removal that has to take place in order to get parts prepared for priming and painting.

I discovered a quick, easy, cheap and green method of cleaning parts while working with some museum technicians on a conservation project. They introduced me to electrolytic rust removal, a technique widely used in the conservation field to both clean objects and to prevent further decay.

The practical applications of electrolysis are many, and its application is simple. To start the process, all that one needs is a plastic container, a piece of scrap steel, some electrolyte (more on this in a moment), a battery charger or battery, and a part to clean.

First, the electrolyte: Water on its own is not very conductive. To make the process work effectively, we need to add an agent that will allow the water to conduct electricity efficiently and effectively. There are several options available. Perhaps the best is sodium carbonate, widely available in grocery store laundry aisles under the name "washing soda." Another option is Tri Sodium Phosphate, also widely available at hardware and home improvement stores. Even plain household lye (drain cleaner) will work, but the solution will be caustic and hard on your hands.

I prefer Arm and Hammer Washing Soda for its low cost, ready availability and ease of use — it's a good idea to wear gloves, but it won't burn your hands or dissolve aluminum parts the way that TSP or lye will. 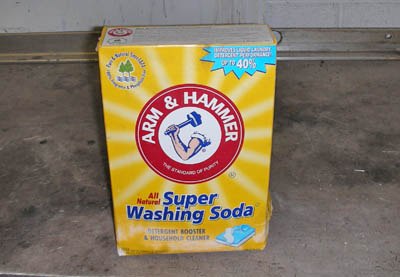 To mix the electrolyte, you will need to use about one tablespoon of washing soda per gallon of water. For a recent project, I mixed a five gallon solution, making sure to stir it thoroughly and effectively dissolve the washing soda in the water. I mixed it in a five gallon plastic bucket. Using a plastic container is key to the process — using a metal container is not only dangerous because of the danger of electric shock, but will inhibit the cleaning of the part. 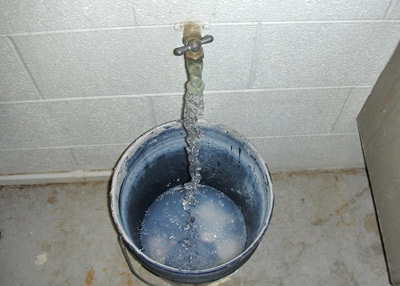 With the electrolyte mixed, we can now clean some parts. I laid out all the necessary pieces on the bench. From left to right, we have: 1. Our washing soda for the electrolyte. 2. A Model T crank handle that was pretty nasty. It had been outside for more than a few years and definitely deserved a second chance. 3. A piece of scrap sheet metal left over from a fabrication project. 4. A bus bar to hang on top of my plastic tank to transmit the power. 5. A five gallon bucket of freshly mixed electrolyte. 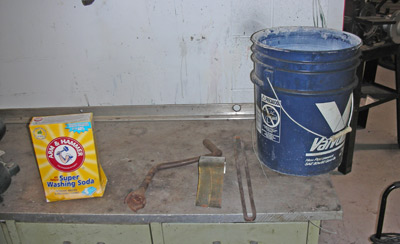 Now, to set things up. First, I wheeled the battery charger over to my work table. I'm fortunate enough to have this nice heavy-duty Schumacher unit, but any battery charger capable of producing ten amps will work. Even a six or twelve volt automotive battery will work. 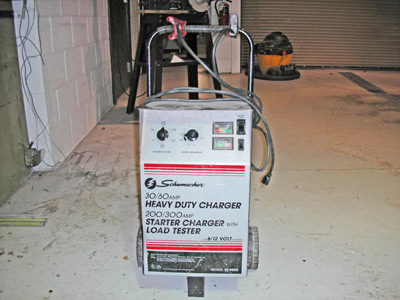 First, I placed my rusty Model T crank onto a piece of wire to make sure that it received the cleaning treatment. I knew that I had a good connection, but it sometimes pays to clean off a small spot on the piece using a wire brush to make sure of good conductivity. 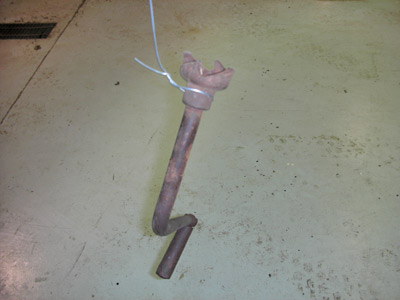 I then placed the crank into the solution and wired the connection to the bus bar, attaching my negative battery charger clamp to the bus bar. In the upper corner of this photo, you can see the slightest hint of the crank sticking out — but I assure you, it was completely submerged. 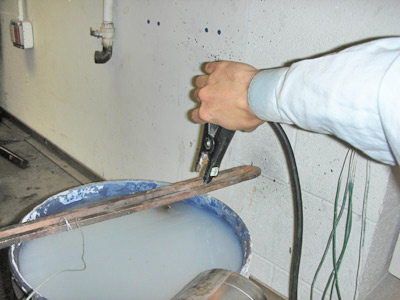 Next, I placed my piece of scrap steel into the water. I made sure to hang the edge of it from the bucket, because it will corrode heavily as I clean the part. I made sure to attach the positive clamp securely to the scrap, making sure that it was not submerged in the electrolyte — I like my clamps, and didn't want to dissolve them in order to clean parts.

I made sure that the electrode and part did not touch and were unable to. Any contact between the two parts will create a dead short, potentially ruining both your parts, the electrolyte, and your battery or battery charger.

I used a plain steel electrode — there is usually an excess of scrap sheet metal in my shop, so it's an easy source of anodes. Some people like using rebar, since it's cheap and readily available. Using stainless steel or other alloys of steel is not recommended — the heavy metals in those alloys will dissolve in the water, making the byproducts of the process toxic and potentially polluting our water sources. I'ts best to stick with plain carbon steel. 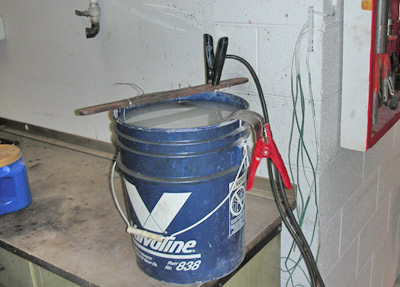 Next, I turned on my battery charger. I used the 12 volt, 30 amp setting, and saw a corresponding current draw of about 2-3 amps. Depending on the size of the parts being cleaned, how close they are together, and how much electrolyte you have in the solution, the draw may be as high as 8-10 amps. More usually indicates some type of problem — I like to keep the amperage low and let the process take more time. It causes less heat to build in the water, and more importantly, prevents a large buildup of hydrogen gas. One of the byproducts of this process is small amounts of raw hydrogen, which is potentially explosive. I work in well-ventilated shop, so explosion isn't much of a concern, but you may wish to set up a tank outside. 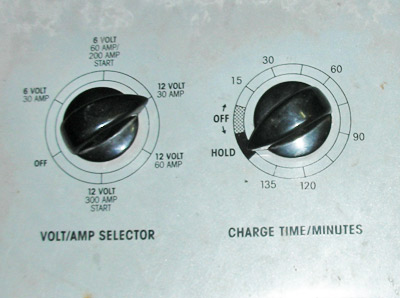 A show of bubbles from the part proved to me that the process was working. 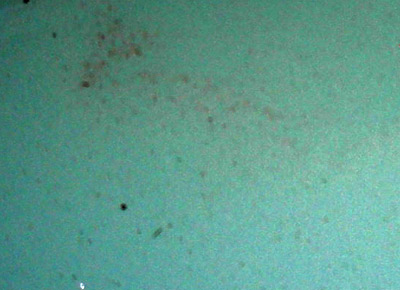 Next, I let the tank sit overnight. Depending on how rusty your parts are, you may be able to remove them from the tank in as little as two hours. My Model T crank had a heavy coating of rust, so I set the battery charger on hold and let it sit overnight.

I came back the next day to find a nice, satisfying ring of rust on the tank and bubbles still coming from my formerly rusty Model T crank. 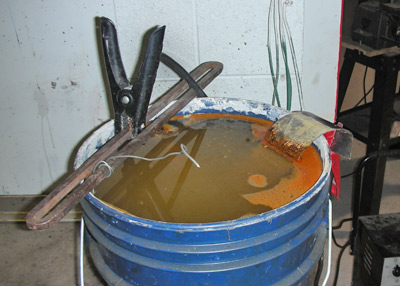 I first pulled the anode from the tank, and found that it was corroded, a good sign. 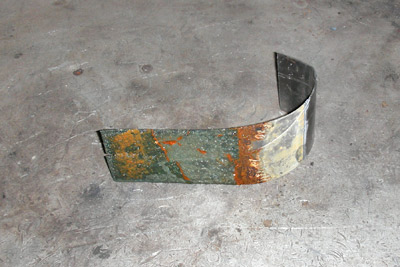 Then, I removed the crank. While it still looks rusty, the rust literally flaked off in my hands. 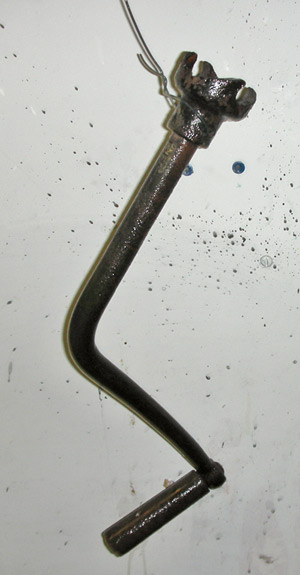 To remove the last of the rust, a bit of scrubbing with some water and a grey scuff pad quickly removed the now-loosened rust. 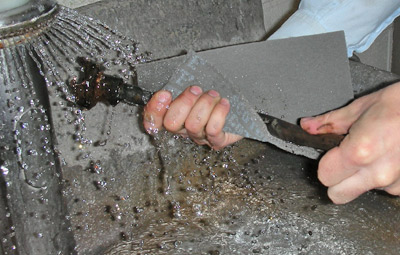 After a few minutes of scrubbing, I had a nice, clean Model T crank that was ready for priming and painting. While the crank doesn't look like bright new steel, the remaining black spots are rust that has been converted into a black oxide that will bond paint to the steel well. A bit of very light flash rust formed on the cast iron ratchet of the crank after I was finished; a little more pre-paint scuffing will take care of that. Best of all, the solution I mixed up will last indefinitely. Though it may look bad, the electrolyte never loses its conductive ability. Once you're finished with it, there is nothing to worry about with disposal — just pour it down the drain. It's basically just soap. 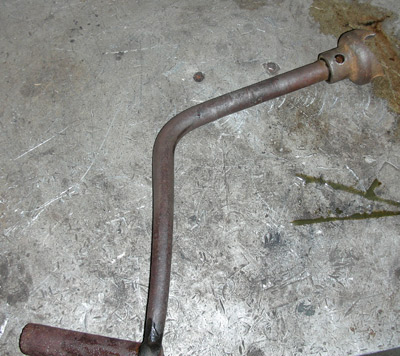 A few last words of wisdom on electrolytic cleaning: it is a cheap, effective method of rust removal from any type of ferrous (iron) metal. It will also remove many types of paint. It is what's known as a "line-of-sight" process; that is, the anode will clean the parts nearest to it. It will also penetrate into crevices and help to free stuck fasteners, bearings, and anything else that may be rusted solid. For intricate, hollow parts, I often form special sheet metal anodes to clean interior surfaces and better reach hard-to-clean areas. It is especially good for cleaning mechanical assemblies, since it doesn't leave any grit behind.

Try electrolytic rust removal sometime. It can be scaled up from large parts (some have done entire car bodies) to the smallest, most jewel-like assemblies. I hope that this time-saving process can become as much a part of your restoration arsenal as it has mine — it frees up a lot of time that I can use to help give another car a second chance.