Renewing a tired set of disc brakes is guaranteed to break you — pun intended — or bring you to a new level of understanding and appreciation of your car's braking system. In any event, if your garage doesn't have certain tools, you're going to have to farm some things out. Don't worry; you'll still be part of the DIY auto fraternity. Call it a litmus test, if you will.

Getting the job done correctly is an absolute must when you're talking about stopping your car. A blown engine is something you can laugh about later. Running into another car, because your brakes weren't probably prepared is another matter.

Ever since Elmer Ambrose of Cleveland, Ohio designed spot-type disc brakes for his electric car way back in 1898, disc brakes have been the preferred brake system for automobiles. Disc brakes are superior to drum brakes because discs can handle higher braking temperatures and dissipate heat more quickly.

They also do not trap water as drum brakes can; when drum brakes become wet, they can suffer a decrease in braking — what is generally called "brake fade." That can happen when driving through deep puddles. However, if you take a car with four-wheel disc brakes through standing water, you'll have no worries about the effectiveness of the brakes, if you find yourself needing them, shortly thereafter.

Disc brakes generally consist of a metal disc called a rotor, which is connected to the wheel. A caliper rests on the edge of that disc, and holds two friction pads on either side of the disc. Applying the brake pedal causes brake fluid to push down a piston within the caliper. That, in turn, pinches the brake pads against the disc and slows the wheel.

Disc brakes do not have return springs, like those in drum brakes, to disengage the brakes. Instead, a seal around the piston bends slightly, and then retracts to pull the piston away from the disc, when the pedal is released.

The most common caliper design utilizes a single-hydraulically-actuated piston, within a single cylinder. Disc brakes such as this were first configured on a compact sports car called the Crosley Hot Shot in 1950. Dunlop developed the first, fully-functioning modern disc brakes in 1953 for the Jaguar C-type racing cars that helped that marque win the 24 Hours of LeMans several times; those brakes were then fitted to Jaguar production cars.

Chrysler Corporation also came out with four-wheel, self-energizing hydraulic disc brakes on the 1949 Imperial; and continued to offer them through 1954. The design had been conceived by H.L. Lambert and was built for Chrysler by the Auto Specialties Manufacturing Company. A series of ball-bearings, between the discs, forced the discs apart as brake pressure was applied. It was a self-energizing system. (Repair of that system is best left to a restoration shop specializing in vintage Chrysler cars — or a particularly creative machine shop.)

Then at the 1962 New York Auto Show in April, Studebaker showed its Avanti sports coupe; fitted with servo-assisted Dunlop 11-1/2 inch disc brakes on the front wheels. Kelsey-Hayes disc brakes with four-piston actuation came to be used on several American cars in 1964.

By 1967, Volvo brought out its 144-series sedan with four-wheel disc brakes, equipped with two brake circuits: if one failed, 80 percent of braking effort was still available.

American cars such as the Ford Mustang and Chevrolet Camaro came to offer, "front disc clips" to help provide better stopping for those high-performance offerings. By 1975, the behemoth Ford Thunderbird offered four-wheel disc brakes, as safety became a paramount concern of auto manufacturers. Today, disc brakes on high-performance cars can utilize up to 12 pistons.

Another peculiarity of disc brakes is they rely upon a small amount of "wobble," also called "run-out" by brake shops, which is normally present in the disc. When the brakes are released, the amount of run-out of the disc or "rotor" simply pushes the pads away from the disc.

But what about rebuilding disc brakes? Well, other than the calipers, which are best left to a shop that specializes in rebuilding calipers, disc brake work is as straightforward as any other type of brake system repair.

When addressing disc brake problems, it is important to address the core problems, not just the symptoms. Tremendous heat builds up where the calipers and rotors intersect. This sometimes will cause the brake fluid to boil, and brake pressure is lost. The diagnosis is sometimes made that the calipers are faulty, when in fact; the problem lies with the hoses. 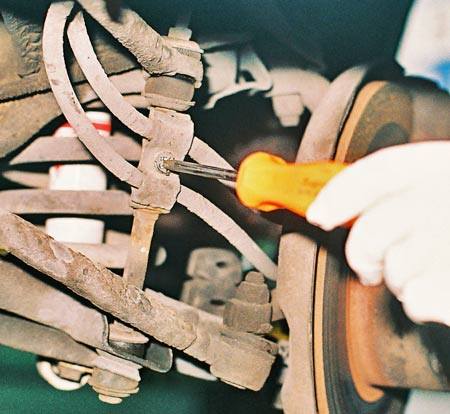 Rubber brake hoses wear out with time and miles. When that happens, the rubber lines will act as one-way valves. Line pressure is unable to feed back normally, and the effect is similar to driving around with the brakes applied. 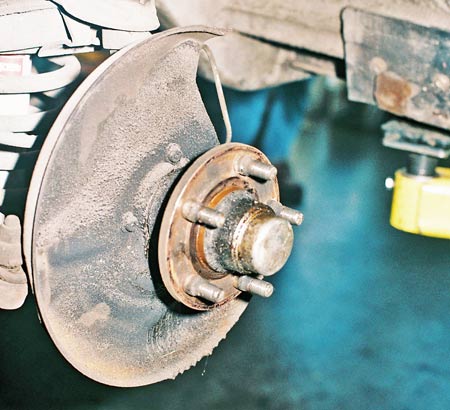 Beginning brake repairs requires dismantling each wheel. You'll need to remove the brake pads and draw back the brake pistons, using a tool made for that purpose. 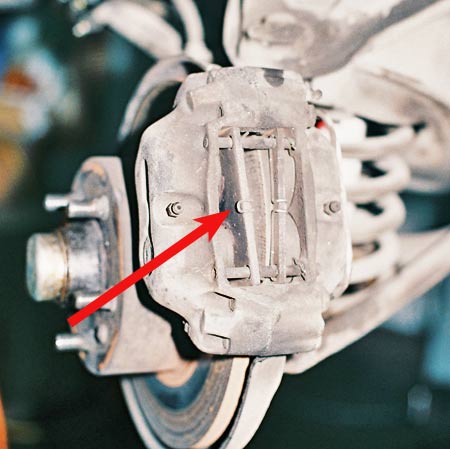 Brake pads an at angle is not a good thing.

If you find the brake pads at an angle, that is indicative of abnormal wear. You should replace those pads, in that case.

Be sure to take a screw out of the bracket that holds the brake hoses; this is a necessary step to taking the hoses off of the car. The hoses should come out easily, after that.

The calipers come off before the final removal of the hoses. Breaking loose brake calipers is aided with the application of fluid to clean out the area to be worked on. WD-40 would work fine to do that, as would Wurth "Rust-off." 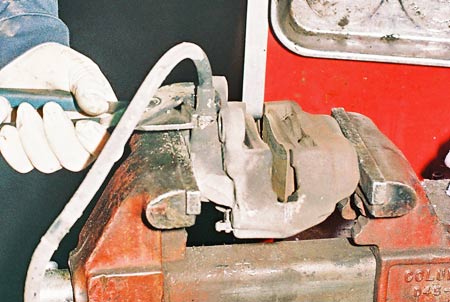 Loosening the brake lines from the calipers.

Once the calipers are off, the final removal of the brake hoses is easily accomplished with a wrench. Removing the caliper in the rear of the car requires loosening two bolts. 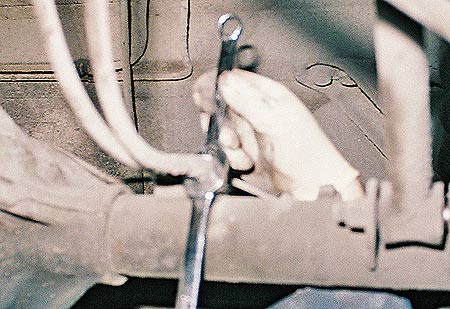 In the case of the car used to write this article — a 1972 Volvo 142E sedan — there were two lines in the back of the car. They were connected to an equalizer valve and then connected to the calipers, via that same valve. (There were four brake lines up front.) Your car or truck likely has a similar or identical set-up.

We don't recommend that you attempt to rebuild calipers yourself. According to John Slipper, owner of Mobile Brake Service in Seattle, Washington, calipers have to be rebuilt for ultimate in safety and performance. "You can't run a caliper from a wrecking yard," asserted Slipper. "Brake fluid in those systems draw moisture. The minute they are parked, they start to corrode and deteriorate."

When you have your calipers rebuilt by a professional, they will typically give you a small "core fee" discount and simply buy a set of rebuilt calipers. As of this writing, John Slipper charged $59 to $79 for a rebuilt caliper. For that kind of money, it just doesn't make sense to risk life and limb to try to rebuild your own calipers.

Installation of new calipers and hoses

Now you need to remove the old brake disc, and then install the new disc. Follow this procedure on all four-wheel/brake assemblies. 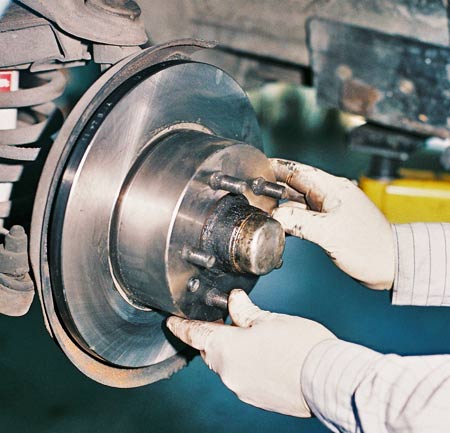 Spin the rotor to ensure it rotates freely. Sometimes road hazards can cause the backing plate can be bent. If that's the case, a hammer and punch can be employed to give it straighten it out so that it doesn't bind on the rotor. 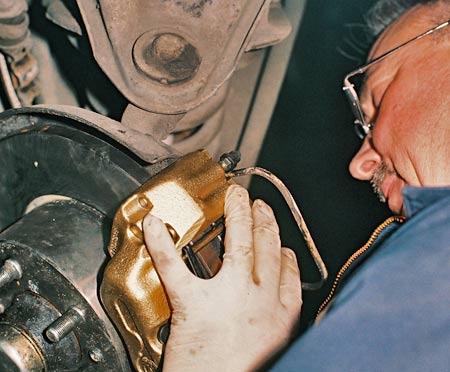 Checking the caliper for rotor clearance

New, flexible steel brake hoses can then be installed. Check to be sure that the caliper clears the rotor; the rebuilt calipers may require shims to ensure proper distances between the calipers and the rotor,

Installing stainless steel, flexible brake hoses in the rear will simply require loosening, and then tightening, the same connections worked on before. The new brake lines will extend from the equalizer valve to the rear disc brake assembly. (Two brake lines go to an equalizer valve, and then connect to the calipers, via that valve.) 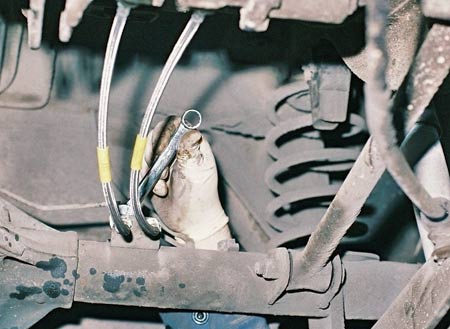 Note: A certain amount of disc oscillation is normal but it shouldn't be greater than 0.10 mm after driving the car a few thousand miles. More than that and you'll experience brake vibration.

It's imperative to make certain the brake fluid to every line is absolutely clean and free of air bubbles. The best way to ensure this is to bleed the brakes first.