To better understand how the cooling system works, it's a good idea to look at the overall operation of the engine. Inside a running engine fuel is constantly burning. A lot of the heat from this combustion goes right out the exhaust system, but some of it soaks into the engine, heating it up. The engine runs best when its coolant is about 180-220° Fahrenheit (depending on the year of your car). At this temperature:

There are two types of cooling systems found on cars: liquid-cooled and air-cooled; but since most cars are liquid-cooled, we'll focus on that system exclusively here.

How it works in a nutshell:

The cooling system on liquid-cooled cars circulates a fluid through pipes and passageways in the engine. As this liquid passes through the hot engine it absorbs heat, cooling the engine. After the fluid leaves the engine, it passes through a heat exchanger, or radiator, which transfers the heat from the fluid to the air blowing through the exchanger. The cooling system involves a lot of plumbing. Let's start at the pump and work our way through the system in more detail. 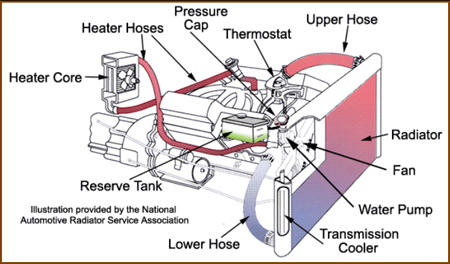 Cars have to operate in a wide variety of temperatures, from well below freezing to well over 100° F (38° C), so the fluid used to cool the engine has to have a very low freezing point, a high boiling point, and it has to have the capacity to hold a lot of heat.

Water is one of the most effective fluids for holding heat, but water freezes at too high a temperature to be used in car engines. The fluid that most cars use is a mixture of water and ethylene glycol, also known as antifreeze. By adding ethylene glycol to water, the boiling and freezing points are improved significantly, as you can see on this chart:

The water pump is a simple centrifugal pump driven by a belt connected to the crankshaft of the engine. The pump circulates fluid whenever the engine is running. The water pump uses centrifugal force to send fluid to the outside while it spins, causing fluid to be drawn from the center continuously. The inlet to the pump is located near the center so that fluid returning from the radiator hits the pump vanes. The pump vanes then fling the fluid to the outside of the pump, where it can enter the engine.

The fluid leaving the pump flows first through the engine block and cylinder head, then into the radiator and finally back to the pump. 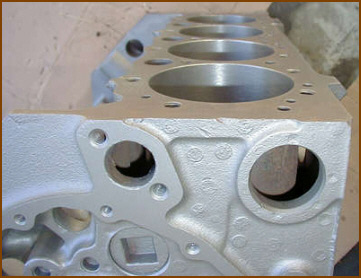 The walls of the cylinder are quite thin and the engine block is mostly hollow.

The engine block and cylinder head have many passageways cast or machined in them to allow for fluid flow. These passageways direct the coolant to the most critical areas of the engine.

Temperatures in the combustion chamber of the engine can reach 4,500° F (2,500° C), so cooling the area around the cylinders is critical. Areas around the exhaust valves are especially crucial, and almost all of the space inside the cylinder head around the valves that is not needed for structure is filled with coolant. If the engine goes without cooling for too long, it can seize. When this happens, the metal has actually gotten hot enough for the piston to weld itself to the cylinder which usually results in the complete destruction of the engine.

One way to reduce the demands on the cooling system is to reduce the amount of heat transferred from the combustion chamber to the metal parts of the engine. Some engines do this by coating the inside of the top of the cylinder head with a thin layer of ceramic. Since ceramic is a poor conductor of heat, less heat is conducted through to the metal and more passes out of the exhaust.

The head of the engine also has large coolant passageways.

As noted earlier, a radiator is a type of heat exchanger. It is designed to transfer heat from the hot coolant that flows through it to the air blown through it by the fan. Some cars (e.g., Corvettes) are equipped with aluminum radiators, since they have a higher thermal coefficient than brass or copper units. These radiators are made by brazing thin aluminum fins to flattened aluminum tubes. The coolant flows from the inlet to the outlet through many tubes mounted in a parallel arrangement. The fins conduct the heat from the tubes and transfer it to the air flowing through the radiator.

The thermostat's main job is to allow the engine to heat up quickly, and then to keep the engine at a constant temperature. It does this by regulating the amount of water that goes through the radiator. At low temperatures, the outlet to the radiator is completely blocked — all of the coolant is recirculated back through the engine. 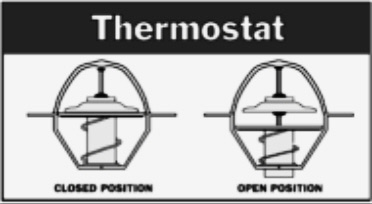 Older cars have engine-driven cooling fans. These fans have a thermostatically-controlled viscous clutch positioned at the hub of the fan, in the airflow coming through the radiator.

You may have heard that if you car is overheating you should open all the windows and run the heater with the fan going at full blast. That's good advice, because the heating system is actually a secondary cooling system that mirrors the main cooling system on your car.

The heater core, which is located in or under the dashboard, is really a small radiator. The heater fan blows air through the heater core and into the passenger compartment of your car.

The heater core draws its hot coolant from the cylinder head and returns it to the pump — so the heater works regardless of whether the thermostat is open or closed.

That pretty much sums it up!