We are working on a 1940 Dodge pickup truck at Gunner's Great Garage in Manawa, Wis. To learn more about this type of truck, we joined the 1939-1947 Dodge Truck registry and their Yahoo! news group at 39-47Dodge@yahoogroups.com. For the past few days, there have been dozens of e-mails flying back and forth because a Dodge truck owner has only one key for his rig and wanted another.

This made us reflect on the topic of keys for old cars, trucks and motorcycles. In our area, we have two hardware stores that stock a good assortment of old key blanks. However, when it comes to making keys for true "antique" vehicles (25 years or older) they only find proper blanks about half the time. And keys for older imported cars are also difficult to come up with. 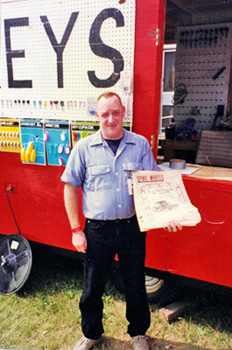 Mike Granlund of Vintage Lock is one of a handful of specialists in old-car keys.

In general, we all take car keys for granted, until the day we break one, lose one or lock our key ring in the car. Then, we have a crisis. Maybe even a HUGE crisis, if the car is an antique or classic model. Gone are the days when you can get a key made for your MG TD or your '51 Hudson just down the street.

During the 2010 Iola Old Car Show we renewed our acquaintance with Mike Granlund, who runs Vintage Lock of Cambridge, Minn. Mike's key-blank-loaded trailer is a fixture at Iola, where he makes hundreds of keys for car collectors and also provides lockout services for owners of classic cars and newer vehicles alike. While talking to Mike about his recent visits to Iraq and Afghanistan (he served as an army medic and picked up Master Sergeant stripes from Gen. Richard Meyer), customers asked if he had key blanks for a '60s T-Bird and if he could unlock a vintage Volvo. He had T-Bird blanks back at his shop and he needed more information to make up the Volvo keys. "Those can be tricky," he told the Volvo owner. "So let's make sure we do it right the first time."

Mike is among a small number of suppliers of hard-to-find key blanks for classic cars, both American and foreign. Another such company, Key Men of Monroe, New York, also stocks keys for antique buses, motorcycles and a few old airplanes. Some of the key blanks these companies offer are no longer manufactured anywhere. Vintage Lock has thousands of keys in their inventory. Key Men offers 31,000 keys to fit vehicles manufactured as far back as the '20s.

OEM (original equipment manufacturer) key blanks are the best to use. Both Vintage Lock and Key Men can supply them for classis cars. These are key blanks made by the company that made the keys originally supplied with the vehicle. Sometimes it's not easy to determine if a part is OEM. According to Key Mens' website, Briggs & Stratton (now called Strattec) is still manufacturing key blanks that fit 75-year-old cars which aren't labeled the same as the originals.

There are three types of blanks. Replacements can be shaped like original keys, but aren't labeled the same. Look-alike key blanks are shaped and labeled to look identical to originals. Crest key blanks may have the carmaker's logo or some other promotional design. I have a beautiful older crest blank with the Indian head for my '53 Pontiac Catalina.

There are a number of ways to go about identifying the right key blank for your car. You may see code as Y-152 on a Chrysler key or 8-50 over C on a GM key made by Curtis. These are called key codes. They tell locksmiths how to cut a key, without seeing the original key. The code may be stamped on the key, on the lock cylinder or written in the original owner's manual if you have it. 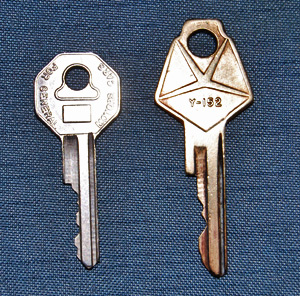 A small number of suppliers of hard-to-find key blanks for classic cars.

There are three basic types of key codes: The Direct Code has numbers that correspond to cuts on the key and tell the locksmith how deep to make each cut. Some keys for older American cars and some foreign car keys use direct code. The Interpreted Code requires a locksmith to do some simple math. He or she may have to subtract something from the stamped number to get to the real code. Reference books tell locksmiths how to interpret codes. With a Book Code the number stamped on the key must be looked up in a code book. The code book index lists the numbers for the cuts that need to be made.

Once a key code is "broken" the locksmith refers to a guide that identifies the depth and spacing of the cuts to be made in the key blade. Key cutting machines are then set for a certain key. There are so many types of car keys that a setup for every key is not possible. A depth and space guide can be used. Each key code has a depth and space guide. Many codes share the same guide.

For cars built after 1990, key codes can be determined via Vehicle Identification Numbers. This system can be misused by thieves, so you should put tape over the VIN plate that shows through the windshield on your newer car.

For peace of mind, you should have at least two sets of keys for every collector car you own. Take one set with you when you're driving the car and bring the other set along in case you lock the first set in the vehicle. Keys are inexpensive and it is not a bad idea to have a third set to keep at home.

Do not label your keys with the year, make, model and color of the vehicle. Car dealers do this and collectors often copy the practice. It is far better to number code your vehicles and label the keys with the codes. Or give each car a pet name and use the name to label the key if the association is not too obvious.

Some people store a spare set of keys in or on the car. Popular storage spots range from the ashtray or sun visor to magnetic cases that stick to the inside of the fuel filler door. A trick recommended in some old magazines was holding keys in place on top of the air cleaner with the wing nut. According to the Auto Insurance Center, all of these are bad practices. The AIC quotes Kevin Kelly, of the California State Automobile Association, as saying, "Don't leave a spare key in the vehicle because car thieves know where to look for them."

A new Keytrol® Car-Key-Vault may be one solution to this problem. The strong stainless steel vault is designed to be mounted behind a modern vehicle's license plate and is opened by using a four-digit combination code. It may not be possible to mount this behind the license plate on every old car, but it's likely that another convenient mounting spot could be found. The use of a car key vault in the home or garage or collector-car storage building is also highly recommended. Key boxes with combination locks are available in most office supply outlets and department stores. In addition to providing a security from thieves, these key boxes keep keys nicely organized.

Keys for older cars are usually pretty simple devices. You put them in the door or ignition, you turn them and they do their job. If you need to make extra keys, you can do it locally or by mail-order through one of the specialty companies. But what if you use a modern vehicle to tow your collector car? Depending on what kind of door-locking system it has, it may be wise to proceed with caution when having keys made.

According to a recent report on WCPO, a Cincinnati, Ohio radio station, a couple had the original rubber-tipped GM key for their Pontiac minivan duplicated by a locksmith. The van was equipped with the latest version of the GM Passkey theft deterrent system, which uses a key with a special electronic chip hidden under its handle. The duplicate key did not have the chip. Use of the wrong key should temporarily disable the fuel pump, but in this case it ruined it and a $600 repair was required. So, it's a good idea to have duplicate keys for your tow vehicle made at a factory dealership. This probably costs a whole lot more than a key from Vintage Lock or Key Man, even with shipping charges!