Car fanatics everywhere are familiar with the Cars in Barns web site. Even those who aren't web savvy were able to view some of the amazing pictures and stories through features in various car magazines. The site features every car lover's worst nightmare; a rare and desirable performance or classic cruiser slowly rusting away in a forlorn lot or backyard. To make it worse, no one is able to liberate the car and save it for future generations to enjoy. For a host of reasons, these cars just aren't for sale. The web site enjoys strong traffic and repeat visitors. We had a chance to interview the current owner of Cars In Barns, Mr. Steve Jackson in Dallas, Texas. We think you'll find the conversation as fascinating as the pictures.

Patrick H. Smith: This site was started in Ontario, Canada, by Scott Robinson. He wanted to show what was happening to a 1968 Hemi Roadrunner that was rotting away. He and several others tried in vain to save it from destruction. Others posted stories of similar cars and pictures were added. In 2003, Jim and Dawn Brown in Branson, Missouri, took over the site and added several new pictures from their own travels as well as from readers. In 2009, you took over the site. When did you first become aware of Cars In Barns and what got you interested in assuming the responsibility of maintaining such a site?

Steve Jackson: I first ran across CarsinBarns.com in 2004. I have always been a gear head, but I didn't seriously get into classic cars until about that time. Like many people, I clicked through pictures for hours when I first found the site. I even sent in a few of my own pictures, but noticed that they weren't adding anything new to the site. A few years later, a mutual acquaintance let me know that the Browns were interested in handing the site over to someone who would bring it back to life. After a few conversations, we struck a deal. I have a background in software and web development, so I thought it would be fun to maintain CarsinBarns.com. 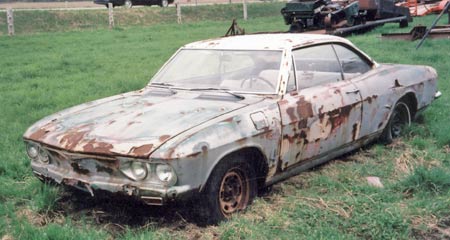 PHS: Looking over the site recently, I was amazed at the vast number of cars left in terrible condition. You can understand it in a wrecking yard, but we're seeing backyards, front yards, streets, bushes, you name it. The actual barn and driveway finds seem almost normal by comparison. I am left with the question, how the heck did these nice cars get in such bad situations? They're collectible, people want them to restore or use as parts cars in the worst case scenario. What causes a nice machine to end up as rusty junk?

SJ: The stories behind how a rare or special car ends up rotting away are as varied as you can imagine. Sometimes cars are left to rot because of an emotional or family connection. A father or son passes away and the surviving family can't come to terms with selling their loved one's favorite ride. Another very common situation is one where the owner plans on restoring it someday. For a variety of reasons, "someday" never comes. 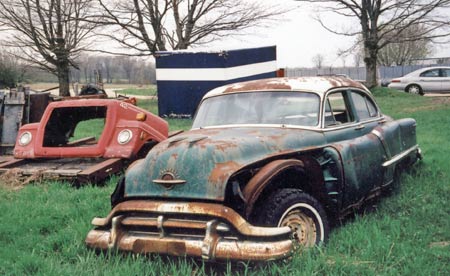 PHS: Some of the vehicles are truly long term storage victims. You can spot the vintage accessories and trendy add ons that were all the rage on some of them. I love the old fashioned west coast mirrors on the pick ups with the orange chevron reflectors. I saw those a lot when I was a kid. Vintage mag wheels, tires and the occasional mod or psychedelic paint job shows up. What are some of your favorite vintage add ons you've seen?

SJ: I ran across a '71 'cuda convertible with an under-dash record player. I understand it was an option that Chrysler offered for a brief period, but I'm not sure if it was a factory item or something added by dealers. It played a special size record, but didn't look very practical. I always enjoy old stickers on cars that have been in storage for a long period of time. They're old car club stickers, old state registration stickers, drag strip decals etc. I like seeing that kind of history. 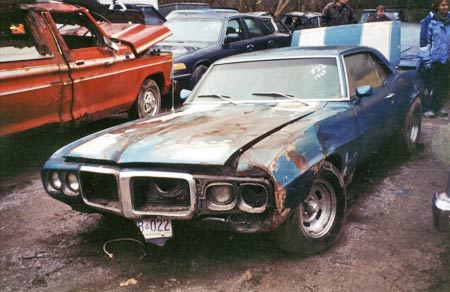 1969 Firebird hardtop damaged in fire and left to rot in yard.

PHS: Cars in Barns isn't just a static record of forgotten cars. There have been a couple of incredible rescue stories as well. The infamous 1971 "Barrelcuda" from Newfoundland is one. This was a 1971 440 Six Pack 'cuda hard top special ordered new by a pop star. It was one of a pair. Over time, it suffered the usual used car fate, then fell into extreme disrepair to the point of resting on oil barrels in a shipping yard. I actually got to see this car before and after restoration. It's beautiful now. Do many readers manage to save a few of these cars? 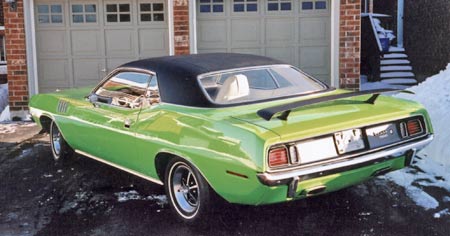 One that was saved, 1971 440 six pack cuda, known as "barrelcuda", it was purchased then restored by Allan Gallant.

SJ: Quite a few of the submissions I receive are cars that have been "saved" from their former resting spot. However, I suspect that many of these cars just end up rusting away in a new spot. Us car guys are all the same. I confess even I have a car rusting away that I'm going to restore "someday". I have received some submissions where a car was saved and the new owner has already completed a restoration. I'm adding a section to CarsinBarns.com titled "Found & Saved" to highlight these inspiring stories. 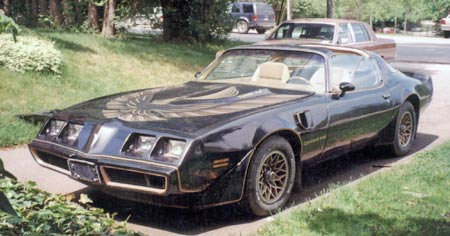 A 1980 SE turbo trans am sits for years on a driveway.

PHS: One description we see often in the pictures is the term 'basement.' Often the photo is too dark to really determine what kind of room it is stored in. Are these really basement units that people can drive their autos into or is it some kind of split level with a garage below the first floor? I haven't seen any homes with a garage style basement where I live. Is this a common dwelling in the south?

SJ: I have seen only a few true "basements" that are set up to drive cars in and out. These are completely custom buildings. More often, we see the split level home with a garage below the first floor, and this might sometimes be called a basement. Having said that, I've seen cars in very weird places. I recently saw a story about a car from the 1950's which was literally buried under the foundation of a house. Or there's the "Corvette inside a bus" story that was recently added to CarsinBarns.com. Coming up with a creative storage solution is definitely better than letting a car rust away in the open. It explains some of the more unusual situations.

PHS: One thing I noticed going through the site is the large number of rare, factory big block and muscle cars hiding. It goes a long way toward explaining why some of them are hard to find. Many of them are very restorable. I'm playing Devil's Advocate here, but if such a large number of these cars still exist then how rare are they really? It can be said that as long as they aren't released into the collector car hobby, the real number of drivable examples remains static or possibly shrinking due to accidents.

We know, however, that sooner or later the owner is going to have to do something. Even if he doesn't do anything, a choice will be made for him when he passes away and the estate is disbursed. My question is, with an aging boomer population that has largely sated its demand for these cars, how long will the demand for un restored iron last?

SJ: That's a great question. The way I see it, some cars are timeless and will always have a following. Although the first generation to appreciate these cars is moving on, that passion is being passed to sons and daughters. I am sure future generations will also come to appreciate these pieces of automotive history. At some point, interest for the 60's and 70's muscle cars will die off, but we aren't seeing that anytime in the next 10-20 years.

PHS: Another interesting fact is cars that in the deep South do rust even before they're taken off the road and stored for eternity. For the edification of our readers, how far south do you need to go before you forget about rust from the climate? It looks as though Arizona or Nevada are the only sure bets.

SJ: Cars from Arizona, Nevada and southern California are usually considered the least likely to suffer problems from rust. However, there are always exceptions. I've found cars in the southeast that are more solid than similar cars I've found in southern California. It often depends on how the car was used. For example, even a car in a state like Utah or Idaho can still be pristine and free of rust. Since they're relatively dry climate states in the summer , those cars are usually destroyed by the incredible amount of salt used on the roads during the winter. However, a car that was only driven a few times each summer can avoid the salt and maintain a rust-free body. The bottom line is you've always got to check your car out. Cars can rust anywhere when given the right opportunity. 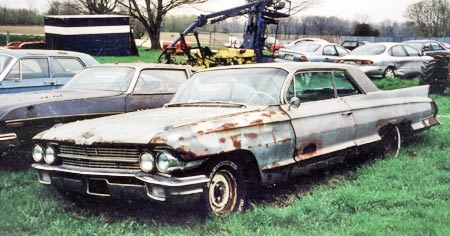 PHS: What are your plans for Cars InBarns.com in the future? The site has had amazing growth. You've stated that in the future there will be fewer posts on cars that aren't performance models and fewer pictures of cars that have been retrieved from the wilds or in a cleaned up or partially restored state. Do you have other plans to augment the site? What can we expect to see coming from CarsInBarns.com for the next couple of years?

SJ: It's been a full time job just to keep the site updated every week, but I've got a big list of stuff I'd like to do with CarsinBarns.com. First and foremost, I'm working on a completely new version of the site to make it easier to read and easier to navigate. I'll be adding functionality to allow visitors to comment on photos and stories on the site. I also plan on building a system that will allow people to trade information about cars that can be bought and saved so we can get a few more of these cars back on the road. I haven't quite figured out the details of how to do this while respecting privacy issues, but it's something I'm working on.

PHS: What kind of cars excite you, Steve? What do you collect and restore?

SJ: Many people will laugh, but I'm a Binder nut. I love International Harvester Scouts and pickups. I have two Scouts and a '71 pickup right now. I've restored both Scouts, but the pickup is just a beater for hauling parts. I also have a '71 Barracuda convertible which is little more than a shell with wheels. Due to the cost of parts, I doubt I'll ever get it fully restored, but I'd like to get it back on the road at some point. Lastly, I enjoy 70's MGB's and Midgets. I had a '71 Midget in high school, and I'd love to get another one.

PHS: Operating this site must give you all kinds of ideas for projects. Are there any cars or trucks out there you'd still like to get hold of? SJ: Yes, I have a big list of cars that I think will become "future classics", and I'd love to work on a few of them. Don't laugh, but some of my dream projects include building an AMC Eagle SX4 and a late 80's Fox Body Mustang Convertible.

PHS: Thanks for your time, Steve. Be sure to visit CarsInBarns.com for some great photos!